18 Aug 2007
A Roman Country Estate
After all the rainy pics of late, I thought I'd share some sunny ones for a change. Here are the first impressions of the villa rustica, the Roman country estate in Wachenheim, a village some twenty minutes drive from Mannheim.

Mannheim lies at the Rhine, so the lands west of the river were Roman-dominated since Caesar who defined the Rhine as border between Gallia and Germania. Finds point to a so-called Elbe-Germanic tribe having migrated in from Bohemia or todays Thuringia (who knows, it could have been some of the guys Arminius conquered when he dealt with the Marcomannic king Maroboduus in 18 AD). They have been connected to the Nemeti known from Roman sources. 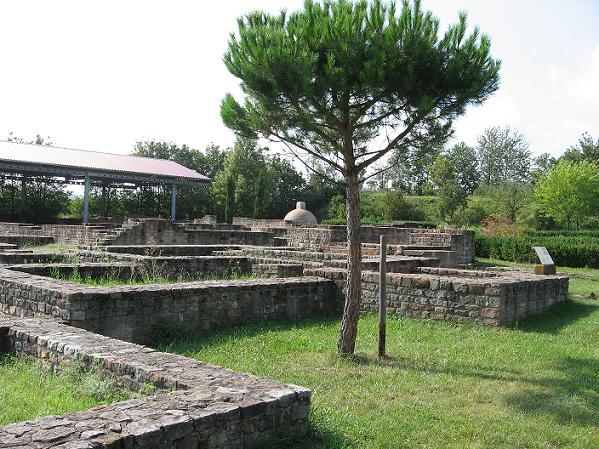 The Nemeti were probably a Germanic tribe, though it's difficult to say for sure because of all the tribal moves going on between 50 BC and AD 20. Maybe they were more Germano-Celtic, like the Treveri north of them you may remember from my posts about Trier. A major Roman town in the area was Noviomagus / Civitas Nemetorum, todays Speyer.

The villa was found by chance during a reparcelling of the agricultural land in 1980. Funds and donations made it possible to buy some of the land which has since then been excavated under lead of the Archaeological Monument Care Speyer, and the remains have been restored to avoid further decay. A number of tablets has been set up which explain what's what in the villa as well as some additional Roman context. The open air museum encompasses 15000 square metres, but there are more remains suspected to hide under the vinyard next to it.

The land where the villa was found also showed traces of earlier settlements dating back as far as the Late Stone Age 6000 BC. 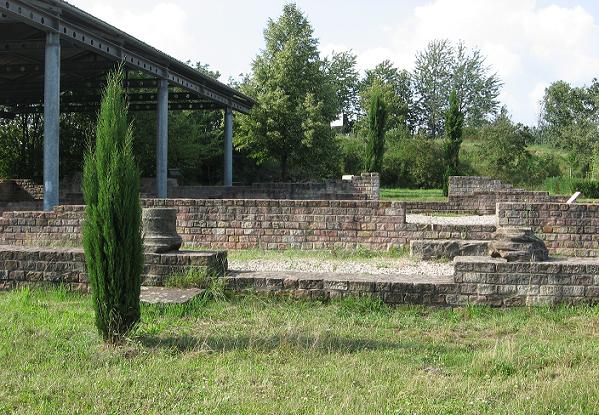 Porticus (entrance hall) of the main building, about 60 metres wide
Settlement in Roman times began with a farm in timber construction about 20 AD. In the early 2nd century the farm was enlarged and stone buildings in Roman style were erected. The villa and outhouses have been changed several times; the remains we can see today represent the status from the early 4th century. The Wachenheim villa rustica obviously had survived the Alamannic incursions of the 3rd and 4th centuries rather well.

We cannot say for sure whether the villa belonged to a Roman family living in the Rhine valley, or to a rich, Romanized Nemetian one. It may as well have changed ownership during all those years. What we can say is that whoever lived there wanted all the Roman amenities like hypocaust heating and baths.

The width of the foundations points to two storey buildings for most of the estate. Another luxury were two sets of baths, one for the family and one for the slaves and farmhands.

Compared to other villas in the area it counts as medium sized though it looks pretty large when you walk around. And while it might not be the largest villa, it surely is one of the best preserved (not counting the reconstructed ones in the Moselle valley). 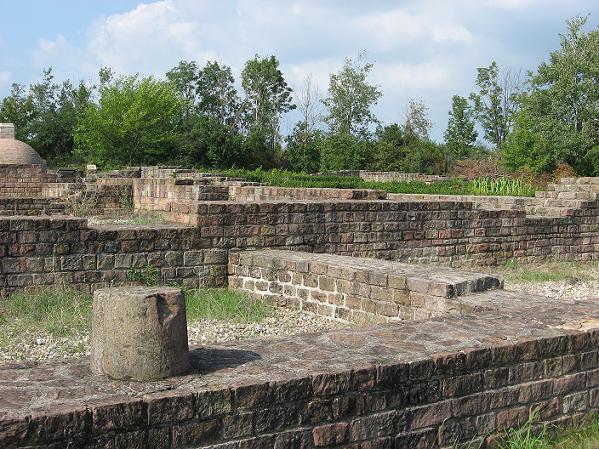 View from the porticus over the remains of the main building
In the 5th century, the estate was still inhabited, probably by Germans, but it began to fall into decline and was abandoned in the 6th century.

This is pretty much the view the people living in the Roman Villa would have had on a summer afternoon. The Romans introduced vineyards to the Rhine valley and other suitable areas around it, that's why the landscape has not changed much since then, except that the modern villages look a bit different from the Roman-time estates and settlements. 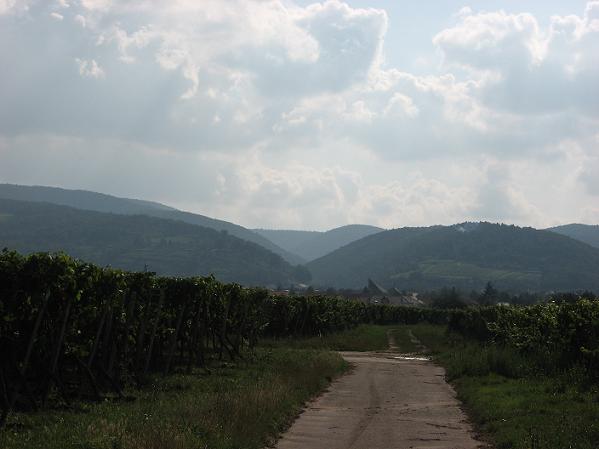 Vineyards near the villa
The area, the so-called Deutsche Weinstraße (German Wine Road) is famous for its vintages. Of course, the growing of grapes spreads far beyond the villages connected by said road.

Comments:
I wonder what it looked like when it was whole. Were the walls wooden or something? Is that why they disintegrated?

The walls of most buildings were stone. I suppose they were used as quarry in the Middle Ages, and that's why only foundations are left.

Since I was in Manhiem before 1980 is the reason why I didn’t hear of it then.

Do we know any thing about the number of people it took to work it or big the fields were.

And the important question – how big was the library? :- )

Built to last.
Wonder if the foundations were made of outer dressed courses with a rubble core. I'm particularly impressed by the uniformity of the quarried facing stones.

Awesome pictures (thank you, thank you), and a very interesting explanation of things. It would be interesting to how many people it took to work the farm, do they know?

Hank and Ann,
I don't know how many people would have worked on a country estate that size. It will be part of my research for the currently shelved The Charioteer though, so I'll keep an eye open for info. The website for the villa is brand new and not yet complete, but I may contact the leader of the excavation.

Bernita,
I suppose there's a rubble core. It is the way other buildings in comparable climate have been done - the Romans knew a few things about insulation. ;)

Hi Vivi Anna, welcome to my blog. Yes, there will be more pics of Roman and Mediaeval remains in Germany and Britain.