15 Oct 2007
Ferry on the Weser River
It's one way to get from one side of the Weser to the other. Those ferries have been more frequent in former days; I remember a tour along the river as teenager where we crossed by ferry on several points to get to interesting places on both sides.

Nowadays there are some more bridges, but mostly, it's longer ways to get to a bridge because many of the ferries are out of service. This time there are only hikers and cyclists on the ferry, but it can carry several cars. 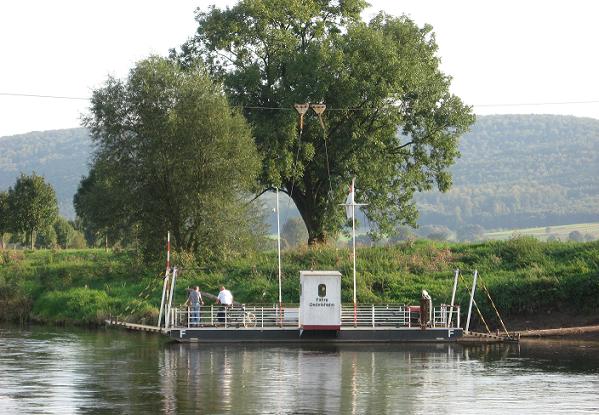 This is one of the few ferries left; at a place called Gieselwerder. It's a so called Strömungsfähre (current ferry) because it works by the power of the water current alone, without a motor. The ferry is connected to a thick wire across the river, and by angling the connecting lines it is directed so that the current will drive it sort of riverwards/shorewards. I suck at physics thus I can't explain it better. The crossing takes less than ten minutes with the current as strong as this wet summer. The ferry is not used in winter. 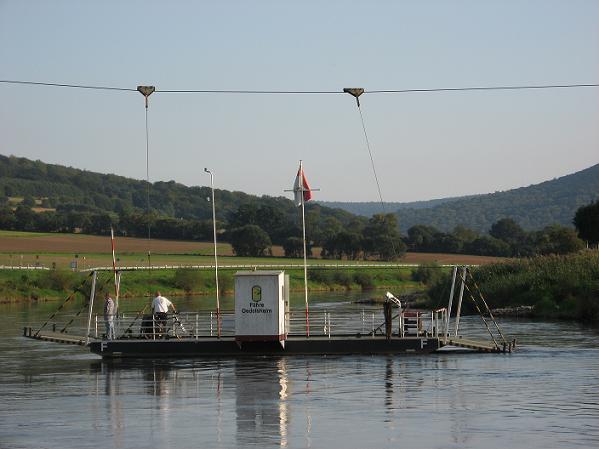 In the middle of the river
It makes one wonder how the Romans crossed. Did they build ponton bridges or did they use ferries? The Batavians under Chariovalda crossed by swimming, together with their horses, during the battle of Idistaviso, that much we know, but they're Germans, not Romans (though on the wrong side in that war, lol). 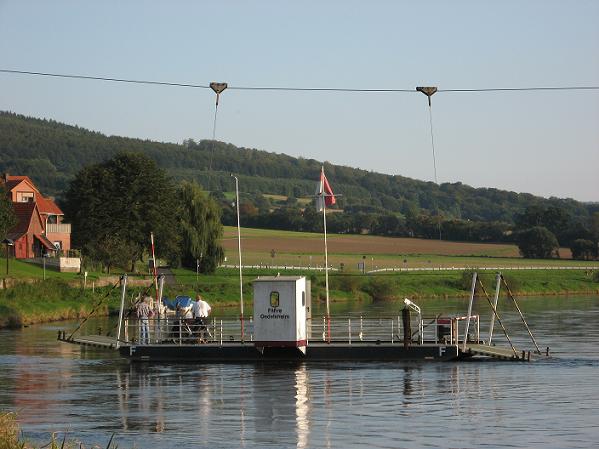 Close to the other shore
I had no need to cross, or I'd have taken the chance to get some pics from the middle of the river. I took the pictures from the eastern, the Gieselwerder side.  ¶ October 15, 2007

Comments:
I wouldn't be surprised if Roman engineers set up ferries.
The basic principal is fairly simple, and Roman engineers were quite sophisticated.
Your photos remind me of several river ferries in use when I was a child - except there was no overhead tow - rather a cable underwater.

Wouldn't the water simply part in the middle if it saw the Romans coming? *g*

I'd love to ride on a ferry. I never have. I love boats.

I agree with Bernita, the idea of a ferry in Roman times seems perfectly acceptable to me.

I think they could have done it, Bernita. Thogh they might have prefered bridges, they allow a larger amount of people to cross.
Have the ferries of your childhood vanished as well?

Lol Constance. Not Arminius' Weser, she's not afraid of Romans. :)
(Most rivers are female in German, except for the Rhine which is male.)

December,
Stockholm is great for ferries because of all the water. When I lived there, I had a ticket for public traffic that covered underground, busses, railway and ferries in the Stockholm area. A tour through the Norwegian fjords would be fun in that aspect as well.
Just travel a bit. :)

Rivers have gender? I did not know this. :)

Neat! Both the ferry and the photos.

One would use a pontoon and some rope as a ferry while the bridge is being built or if the river is to wide.

LOL about the Romans parting the rivers. The river doesn't look very wide or is it just the angle of the photos?

There are a few chain ferries in East Anglia that work on some kind of underwater cable. I think there's a motor-driven winch on the banks. Using just the power of the current is a neat trick.

There's supposed to have been a Roman ferry service across the Humber estuary, since Ermine Street ends abruptly on the south shore (near the modern village of Winteringham) and another road continues on the north shore from the fort at Petuaria (modern Brough). I don't think anyone really knows how it would have worked. I always associate the Romans with building bridges or fords to cross rivers, perhaps because, as you say, a bridge can carry a greater volume of traffic than a ferry. Roman roads were part of the military infrastructure and if you're trying to march a legion to a trouble spot in double-quick time, you probably don't want to have to hang around while a ferry shuttles back and forth!

Constance,
we love to confuse those poor English who try to learn German.

Hank,
I still wonder how the Romans managed to build bridges so good they're still in use (like Trier). Though besides the more permanent stone bridges, they build a lot of wooden ones that they often destroyed themselves to prevent an enemy from crossing. Therefore, a bridge across the Weser won't be impossible.

Shelley,
it's the angle of the photos. I won't try to cross the Weser swimming, and I'm part-selkie. :)


Carla,
the nice thing about the Weser ferries is that they're so quiet. No rattling, roaring motor.

That's why I vote for bridges as well. When the Chatti escaped over the Eder, the Romans didn't follow them because they shot arrows from the other shore and prevented the Romans from building a bridge. Which tells us that wooden bridges seem to have been the default setting, and that the Romans didn't like to cross rivers swimming.
There are remains of a stone bridge across the Tyne near Chesters which was part of the Roman road system.

I don't know, Gabriele.
I am far from the land of my childhood.

Swimming a river while under attack is probably a high-risk strategy to say the least. Not only are you under missile attack while in the water, when (if) you get to the other side you have to haul yourself up the bank, during which you're unable to use your weapons and a sitting target for a quick thrust by enemy blades. You'd need pretty withering covering fire from artillery and/or missile weapons on your own side to keep the enemy far enough back from the bank to make it work, I would think. ISTR a contingent of Batavian auxiliaries swam the Medway during the successful invasion of Britain, but they did it at night.

They did it during daytime in the battle of Idistaviso, and Arminius had them for lunch. :)

But the fact that Tacitus mentions a bridge did strike me - trying to swim the river would have been more logical in hot pursuit. And the Eder is not a large river, albeit swift.

I love taking ferries.
Here in France we have lots. Some cut across bays, others cross rivers or sounds. They're called navettes here.

Nice to hear they haven't been abandoned everywhere, Sam. I can see reason in the Scandinavian countries; traffic in remote corners often would not be enough to make a bridge a sensible investment, but France has a lot of traffic.

Some of the fjords in Norway (particularly in the south-west) can only be crossed by ferries (if you don't want to drive 100 km on gravel roads to go around it, lol). There are ferries crossing the Trondheimsfjord as well (though they are slightly bigger than this one here)

The river that runs through my village could only be crossed by ferry until the 30s. Now there are plenty of bridges.

I want to try swimming across that river. Some day.

The Norwegian fjords are so beautiful. One of my dreams is to be able and afford a tour with the post ship.