10 Jan 2008
Carolingian Architecture
This beautiful building - the Gate Hall of Lorsch monastery - is one of the few remaining examples of post-Roman but pre-Romanesque architecture in Germany; its style is called Carolingian. 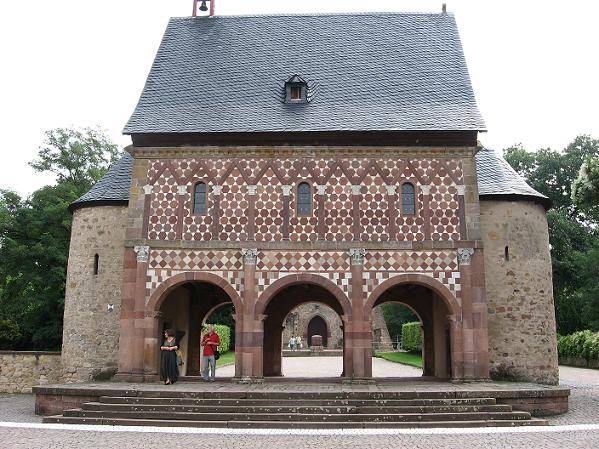 A monastery was established in Lorsch (former Lauresham) in the Rhine valley in 764. It received some popular relics and soon developed into an important place, especially after Charlemagne took an interest in it. The minster was consecrated in 774 in presence of King Charles, the future emperor. 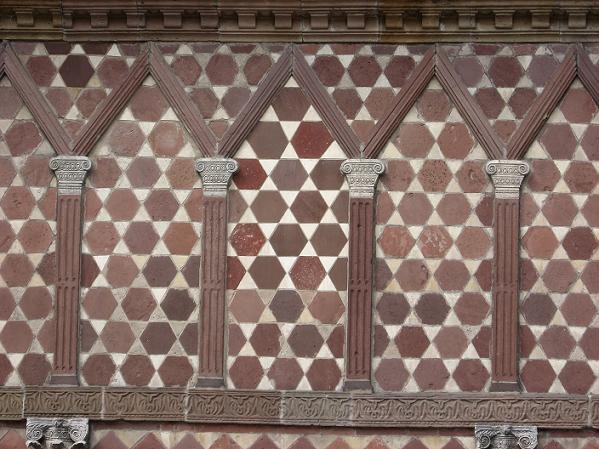 Closeup of the mural ornaments
At the beginning of the 9th century, news about construction work in Lorsch come to an end, so we can't say for sure when the gate hall was built, but it seems to date into the 9th century, not the time of Charlemagne. A pity, it would be nice to know he already walked under those vaults.

There is one vague mention of an ecclesia varia (a 'colourful church') in the 870ies that could refer to the hall, but we can't be sure. 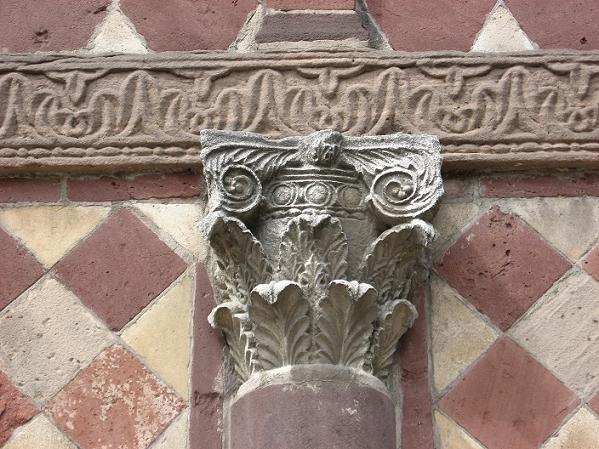 Closeup of a pillar
Today, the hall is the only part that remains of the Carolingian building, and the monastery no longer exists. The Gate Hall in Lorsch is part of the World Cultural Heritage.   ¶ January 10, 2008

Comments:
Yay! Welcome back. Pretty pictures of a very pretty building, with an interesting background.

What a lovely building! Faintly reminiscent of a Roman mosaic, but with much bigger tiles. Are the tils painted, or are they just different colours of clay/stone?

"The Gate Hall in Lorsch"
- like something out of Andre Norton.
Names give me shivers sometimes.

I remember being force fed Carolingian architecture in Art History class. Your examples are far more interesting than the ones in the book. :) Which I think were all French, but that was many years ago, I could be misremembering...
Cool gate hall though. I would be walking back and forth under it, planning my siege. *g*

Carla, the tiles are different stones. Red and yellow sandstone, I think.

Bernita, I wonder how English speakers pronounce Lorsch. :) It's something like Lawrsh.

Force feeding is no fun, Constance; ask the geese. :)
I try to educate in an interesting way on my blog. Won't have me readers bored. ;)

What gorgeous architecture - and how original. It's a strange mix of styles. We have a few buildings in Normandy in that style - I'm thinking of a particular building with a drawbridge and a moat - and then the building morphed when one of the family members decided she wanted to live in the Rennaissance style. I'll have to find some photos of that place. It's quite unique. But the brick work here made me think of it.

It looks a bit like someone got the idea to put a Roman mosaic floor on the walls, using XXL pieces. *grin*
Seriously, I think there is a Roman influence - the Carolingians knew Roman villas from France and the Rhine valley. But the pillar ornaments point forward to the Romanesque ones of fe. Königslutter.

To live back in that period would have been something. Just getting to see all the architecture of that time in all it's full glory would be amazing!

When trying to pronounce Lorsch I thought it was like saying lore instead of law..rsh. Am I making a BIT of sense? I think I just confused myself....I'm REALLY trying to learn, I promise;0)

Have a good weekend!

Wow, what a gorgeous building. It's so odd and original, but lovely. Like Carla said - very mosaic-like. I like the use of different coloured stone to create that effect. :)

Yep Crystal, time travel would be fun, but I'd like to have an option to return to our time to get medical treatment and escape a political marriage. ;)

Kirsten, it's a unique piece of architecture indeed.

LOL! I like that idea too! There would have been no way in hell i'd go for an arranged marriage. I sure would have learned to fight as well or better than a man that way to ensure I wasn't forced. Oh well, I've always been the rebellious type! Have a good week!

Carolingian--thanks, Gabriele! I think you just gave me a good model for Raevani architecture! d:)

Glad to give you some inspiration.