1 May 2008
York Guild Hall
Or, The Ancient Guild Hall of Merchant Adventurers of the City of York.

I like the merchant adventurers; it evokes images of stout cogs with red and white sails ploughing the green waters of the Baltic Sea, camel caravans trudging through yellow sand, mail clad mercenaries with their hands close to the swordhilt, and white eyed moors gesticulating with slant eyed men from Cathai in front of the pillared facades of a Venetian house, or a caftan clad citizen of Novgorod drinking beer with a golden haired Nordman while admiring the wonders of St.Mary Church in Lübeck, anxious to return ere the Gotland pirates gather another fleet. And maybe his comrade of chance is a pirate himself, and the moor in Venice an escaped galley slave who fought as mercenary all the way up into marrying the doge's daughter.

Though the explanation is less romantic: a merchant adventurer was someone who risked - adventured - his money in overseas trade. 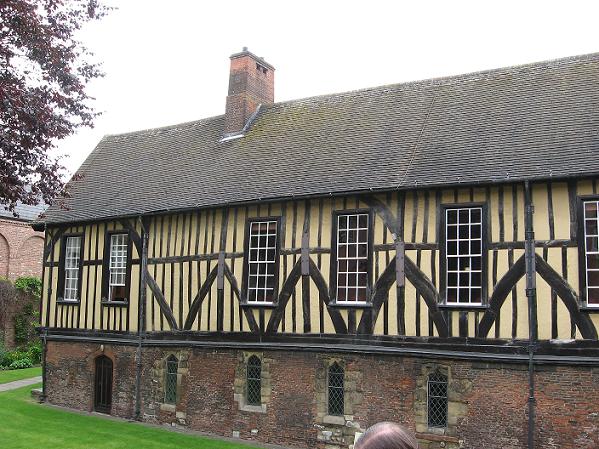 Outside view of the York Guild Hall

I didn't have the Guild Hall on my list of places to see, but when I visted the Roman baths, I got a ticket for several small museums, including the charming one about Richard III (which wasn't on my list either thanks to crappy UK travel guidebook - next time I'll spend the money on a Baedecker) and the Guild Hall, so I sneaked it in between breakfast and catching a train to Newcastle on my last day. The place is surely worth a visit. The York Guild Hall is the oldest that survived with its business rooms, hospital and chapel intact, and it's the largest townhouse of the time, only churches and castles were bigger.

In 1357, a group of influential men and women founded a religious fraternity and built the hall. Which proves, again, that not all women in the Middle Ages were suppressed to the level of inisgnificance except for popping out as many children as possible; women held considerable influence in the guilds.

Less than a hundred years later most members were merchants, and they set up a trading association, a guild, alongside the religious fraternity. The hall was quite the multifunctional place, the members conducted trade business, said prayers, cared for the poor, and met socially.

The Guild (today called Company) still exists though no longer as trading association. They still are involved in charity and use the chapel for services, and they own the Guild Hall as trustee for visitors. 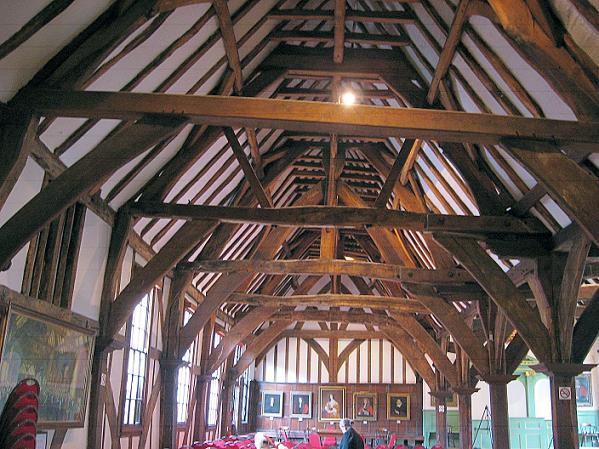 The Great Hall
The Great Hall was built as double nave because there were no timbers large enough to span the full width - English oaks grow big, but not that big.

The lower part of the hall, the undercroft, is constructed of bricks; the earliest to be made in York since the Romans left. The upper part is a half-timbered construction . The process used was interesting because each section was first put together lying on the ground, the timbers marked, and then it was dismantled and reassembled in an upright position on the building.

The windows are one of the 16th century additions, the original ones were smaller. 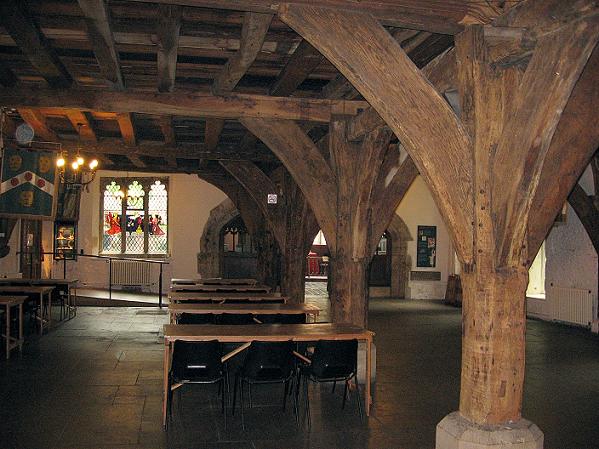 The Undercroft
The Undercroft was used as hospital from 1373 to 1900. Guilds were the first to build hospitals in several towns, for example in Lübeck as well, and there, as in York, the hospital was in use into the 19th century. The name hospital may be somewhat misleading, because the inmates were poor and infirm people rather than acutely sick ones.

A great fireplace was inserted in the 16th century; before the room had been heated by braziers. Some of the beams still show scorch marks of torches. The place must have been rather dark and cold, especially in winter, but probably a paradise for people who else might have been left to sleep on the streets.

Charity is one reason to have a hospital, but another was order. People who had nowhere to go, no connection with the organised life in a town, were considered a potential danger and a disgrace in the eyes of God. By giving them a place to live, they were reintruduced - or kept - within society.

On the undercroft level is also the chapel which was used by the guild members as well as the people in the hospital. It is consecrated to the Holy Trinity which also protected the activities of the guild. 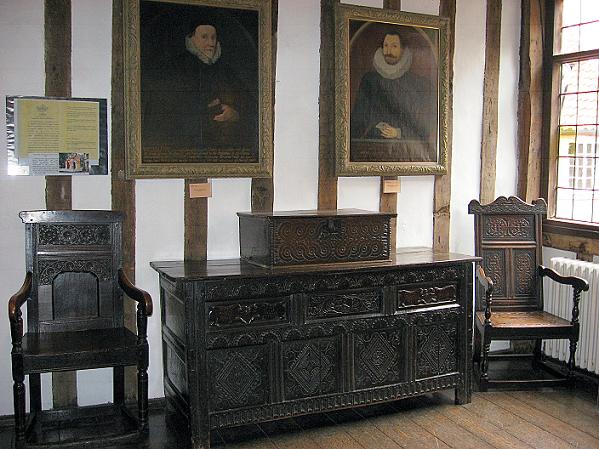 Old furniture in the First Anteroom
An annex was added in the 16th century, it holds the Governor's Parlour and several anterooms. It is a three gabled structure that fits well with the two large gables of the double nave roof. The rooms inside today display a nice arrangement of old furniture, paintings, and some silver.

The company held a number of responsibilites like the control of weights and measures, and they also trained apprentices and helped young men to start their own business. Some of this was conducted past the Middle Ages (there's a 17th century document about a loan, fe.). Until today, the company also keeps the archives.

Comments:
I have a similar attraction to the idea of merchant venturers :-)

Didn't the Romans have kit-built timber forts as well? (A sort of giant Ikea flat-pack) Maybe the bricks weren't the only technology to be revived.

Hospital is from the same root as hospitality, which is still with us in more or less the original meaning. I wonder when 'hospital' acquired its association exclusively with sickness?

Interesting post, Gabriele. I love the photos of the interior. I also enjoyed your opening para about the images you imagined.


The furniture in the undercroft is new?

Lol Carla, an Ikea set 'Roman Army Camp' would be fun. The army did indeed carry material to fortify the camp every night, like piles for palisades.
Yes, the root is the same - in German, the old word is Hospiz, while a modern hospital is a Krankenhaus (house of the sick).

Hank, the furniture in the undercroft and great hall is modern because both rooms are still used. The old funiture is in the anteroom, the Governor's Parlour and such.

Aha...I now see how to build my great hall! A double nave! Wonderful!

Actually, I built MY first great hall the same way....with great huge beams salvaged from a local barn, on the ground and actually upside down....then dis assembled it, and shipped it 8 hours down the road to where it stood for ten years. It now sits in a sea-land container on my property, and I was wondering how to utilize it...it is really not very big withall, only fifteen feet by thirty feet, barely big enough to swing a sword. A double, or even a triple nave would work perfectly!

Actually, the whole story of how I built MY mead hall is here on my web site....http://www.southtower.on.ca, go to the Library, and then to "Yusef's Post and Beam Experience". Its a pretty neat story!

What a beautiful building, thanks for the photos and tour!!

That's very pretty. I'll have to see if I can find something like that in Amsterdam :)

Am I the only one who wants to climb onto those beams? *feels like a child*

Oh, those beams!! Gorgeous!! And that the building is still in use is just wonderful... (here in America, once something gets to be more than a couple hundred years old, they slap an admission fee on it and don't let you touch anything inside...).

And I want to climb the beams too, though sadly I've gotten old enough that the idea didn't occur to me until I read celede's comment. :(

Celede, growing up is overrated. I still climb castle ruins, esp. if there's a Don't Walk on the Walls-sign. ;)

Bethanie, they charge an admission fee here as well which is used for the upkeep of the building, and the silver is behind glass, but historical places are often still alive in some way. You can rent the Guild Hall for meetings, Hanstein Caslte in Germany holds concerts in summer and the Hardenberg a Mediaeval festival complete with a siege of the castle.

a Mediaeval festival complete with a siege of the castle.