9 Jun 2008
Master James of St.George
No, Gabriele didn't make me up like she did with that Aelius Rufus guy, I'm a real person who lived from 1235-1308. And sometimes I return to my old places like Caernarfon Castle and talk to people. 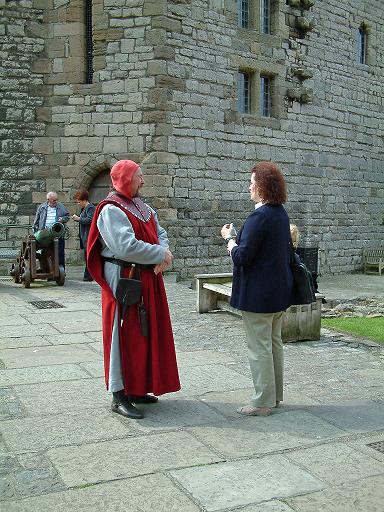 Here I'm deep in conversation with Gabriele about the payment of masons*. I know a lot about that matter because I've been a master mason and military engineer all my life, following the footsteps of my father.

First I worked for the Counts of Savoy, and I took my name after the palace of St. Georges d'Esperanche which I built for Philip of Savoy. In 1278, Count Philip was visited by King Edward I of England who had a problem. He had conquered a people called the Welsh, but they took ill having a king not of their own blood and made several attempts to oust Edward. Thus he planned to build a ring of castles around the land to strengthen the position of the English. I wasn't sure at first if I really wanted to work in a land full of mountains, wind, rain and savage people who spoke an incomprehensible language with far too many ll and dd, but the payment was excellent and Edward ensured me he wanted the biggest fortresses he could get. It should prove an interesting challenge and so I packed my belongings, picked the best masons and engineers from my staff, received the farewell of Count Philip and set off to Wales.

It was a challenge, even with sixteen years of experience in building castles. Over the years I oversaw the construction of the castles of Caernarfon, Conwy, Harlech, Beaumaris, Flint, Rhuddlan, Builth and Aberystwyth, and I was involved in the repair and refortification of Dolwyddelan and Criccieth, Welsh castles which Edward had conquered. 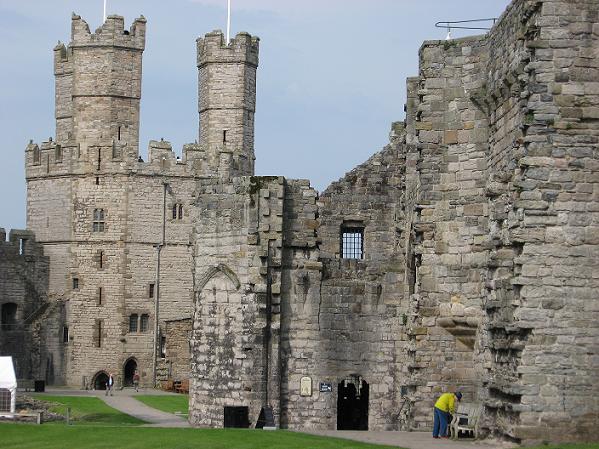 But my favourite place is Caernarfon which I modeled after the walls of Constantinople. For some reason, the Romans still hold a popular place in Welsh myths despite the fact they came as conquerors as well, and so Edward got the idea to connect his reign to the Roman Emperor Maximus, whom the Welsh call Macsen Wledig, and he wanted to demonstrate this by building a Roman-style castle. The Romans had been in Caernarfon which they called Segontium; you can visit the remains of their fortress on yonder hill. They produced some fine stone work, those Romans.

As you can see, Caernarfon has octagonal towers instead of round ones, and we used two different sorts of stone to create the red stripes. I'll tell you more about constructing a castle next time, it's a long and complicated process, and the walls and towers you see today only the final result. There are also some features I would have liked to add but never got the chance. Edward wanted too many castles at once, and in the end there was not enough money left. 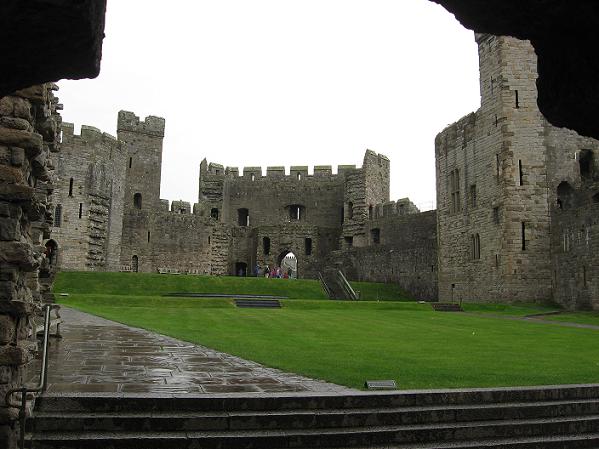 View towards Queen's Gate
It was not my fault. Yes, I did receive the handsome pay of two shilling a day which was later raised to three shilling a day for the rest of my life, but that doesn't account for the 12,000 pound the building of Caernarfon cost from 1283-1292. You wonder what three shilling were actually worth? Well, I made in one day what a skilled mason who was not a chief engineer and Master would make in a week. A simple labourer digging trenches and such made two pennies a day, and one penny would buy him food and wine and a bed at an inn. If he spent the other penny on a whore, he'd be in for some trouble with his wife, though.

The comparably low payment for digging trenches should explain some of Edward I's annoyance with his son's hobbies, Ed II could never have made a living off those. *grin*

* The above picture was taken by Adrienne Goodenough from Cadw. She organises educational events in historical sites managed by Cadw and was so kind to send me the pictures she took of me and Master James. I hope the actor who played him - I never learned his real name - won't mind that I use James as narrator for some of my blogposts, but he was fun and an inspiration. The information about payment I got from him, but the rest is based on the info in the guidebook.  ¶ June 09, 2008

Comments:
I love that middle picture: Towers galore. And it's so detailed it's almost a floor plan. I think I saw a few plot bunnies scurrying off.

Even the names shout with mystery

Oh yes, towers galore, Ann. Edward's castles all have a lot of those. And the plotbunnies don't bother to scurry off, they're hiding in plain sight. :)

Bernita, the names are a mix of Anglonorman and Welsh, today mispronounced by the English. :)

That guy really should have a reality TV show - sort of 'How to do up Your Castle in 100 Easy Steps! ;-)

Great post, Gabriele. LOL about the "how to do up your castle in 100 Easy steps" reality show Lady D mentioned. I can see it now.

Lol, such a show could be fun. After all, we have Unser Traum vom Haus (Our Dream of a House) here which shows families building their own house with all the things that can and will go wrong. :)

Step 1: Find king with money.
Step 2: Find good place, preferably with lots of water around or on top of a hill.
Step 3: Get masons and labourers from all over England. You will need a lot of those.
Step 4: Build preliminary timber and earth fortifications - you'll never know when the next attack of the Welsh will take place.
Step 5: Decide on how many towers that castle will have. ...

We could use more builders like Master James - the buildings we build now fall apart after 25 years. It's a sad state of affairs!

What an interesting guy he must have been! And busy. I didn't know the same military engineer built all the castles. He sounds like the Vauban of his day - I hope we hear more from him!

Octagonal towers... Not just the land wall of Theodosius. Saw one on Rhodes - another Byzantine castele, of course.

Indeed, Sam. Looks like the wrath of a king presented with crap work put the fear of the gods into the workers a lot better than the threat of a lawsuit for crap work today. ;)
And Master James was a better architect than the idiot who built the house my parents bought.

Carla, it's amazing since all the castles, while following an overall Norman pattern, look pretty different. He must have been really creative. I'm tempted to seek out St. Georges d'Esperanche in case there's anything left, to compare it with the Welsh castles Master James built.

Zornhau, I suppose since Rhodos is a bit closer to Byzantium/Constantinople the architects imitated the fortifications they would have known. But I wonder how Master James knew about those features; there's no proof he's ever been to Constantinople. Though it can have happened; not all lists that would have mentioned such a fact (like Philip of Savoy giving him money and equipment for travel) have survived.

Ed II could never have made a living off those

There's another show for you -- get ed to live on two pennies a day for a week. Maybe call it 'Riches to rags' or 'Spend a Penny'. I'm sure it would have cured him of ditch digging!

You know, the whole bunch, Ed, Isa, Hugh, Piers and friends and enemies, would have made much better candidates for those reality shows than the third rate 'stars' that get sent into the Jungle Camp and other places, or have to cook the Perfect Dinner or whatever.

Gabriele, you're doing it the hard way!

Lol, Edward did it the heard way then as well. He got a lot of workers from England he had to pay instead of foricing the conquered Welsh to do the job. Maybe it's a bit of the same reason the Romans allowed only legionaires to build the forts and fortresses, even those that were later garrisoned by auxiliary troops. Didn't trust them to do a decent job, it seems. :)