17 Sept 2008
Quedlinburg
Quedlinburg is a town at the eastern fringe of the Harz mountains. It is first mentioned in a charte by Heinrich I (the Fowler) dating from 922, as location - villa quae dicitur Quitilingaburg - of one of the many palatine castles spread across Germany during the Middle Ages. Quedlinburg is part of the World Heritage.

I'm going to call the German kings Heinrich to distinguish them from the Henrys running around in British history since both got the same numbers. Most of them got dysfunctional families and as well. Some things never change. ;) 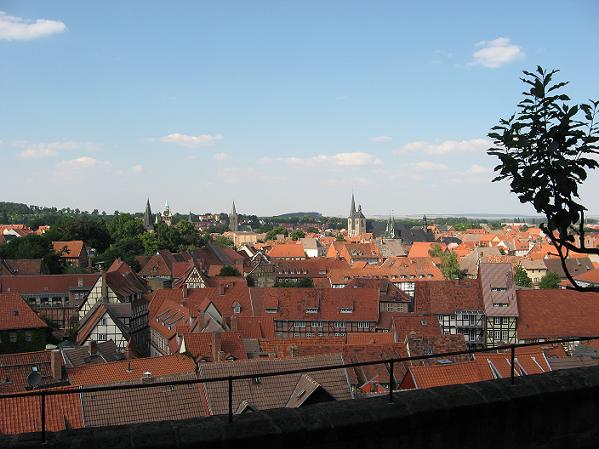 View from the balcony of the Canoness Palace on the Schlossberg

Heinrich I was later entombed in Quedlinburg. His widow Queen Mathilde obtained a grant from his son and successor Otto I to establish a canoness chapter which she led for 30 years. Otto I visited Quedlinburg several times to celebrate Easter. In 941, he barely escaped an assassination attempt by his younger brother Heinrich. See what I mean about dysfunctional families? 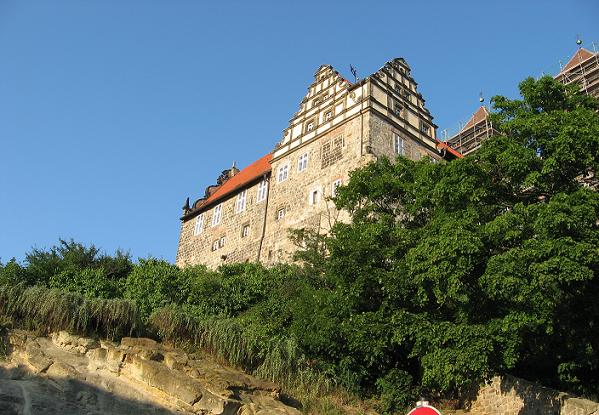 View towards the Canoness Palace on the Schlossberg
The next one to have problems was Otto III. When his father, conveniently also named Otto and numbered II, died in 983, Otto III (sometimes called The Child because those numbers get boring) was only three years old. His uncle Heinrich The Quarrelsome (how's that for a nickname?) wanted to be king himself and kidnapped the boy. He really should have known better because by that he pissed off two powerful women, Otto's mother Theophanou, a Byzantine princess, and his grandmother Adelheid of Burgundy. The ladies rallied a number of great nobles who also were loyal to the House of the Ottones, or at least saw their advantage in that alliance, and within two years managed to force Heinrich to swear fealty to Otto (Still the Child) in Quedlinburg. 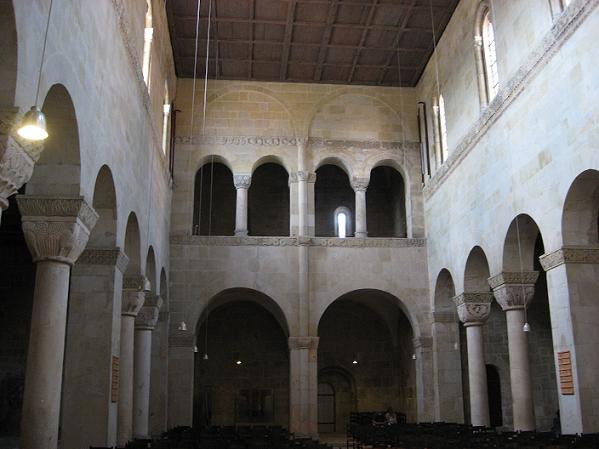 Romanesque Chapter Church, view to the Imperial Lodge
In 994, Otto III granted his aunt's chapter the right of market, mint and tolls and thus laid the foundation for the development of the town. The town experienced an economical rise in the following centuries and gained more independence from the abbess of the chapter, the nominal lord (or lady) of the town. In 1426, Quedlinburg joined the Hanseatic League.

The first time I learned about the chapter in Quedlinburg was in a YA book about Dorothea Christiane von Erxleben (1715 - 1762), the first woman to study medicine in Germany. The abbess at that time was her friend and patron, and the Renaissance palace where she lived looked pretty much like we can still see today. 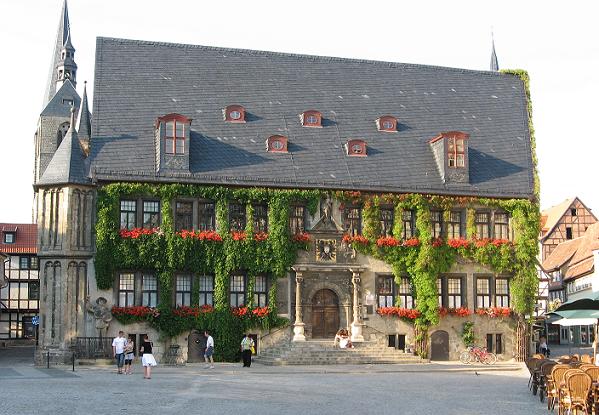 The town hall
During that time, the burghers began to build those beautiful half timbered houses some of which have survived and been restored. The town fortifications fared less well, only a small part of the walls and towers are left. Walking through Quedlinburg shows its past as East-German town; besides a good number of renovated buildings there are still some corners in dire need of a makeover. As usual, money is the main problem.

The representative town hall was built in 1310; in 1616 a Renaissance portal was added, and there are later changes from the 19th century that affect mostly the interior. 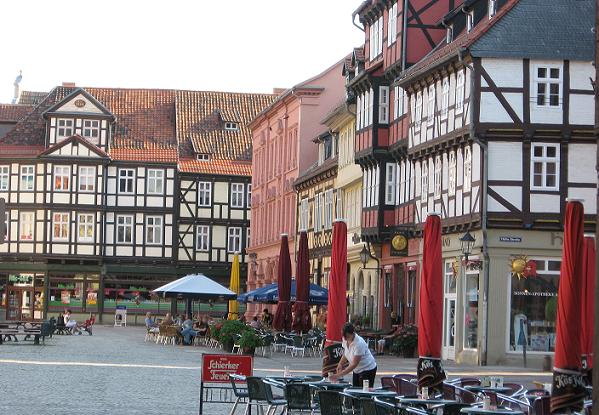 Market place
The Quedlinburg Annals list 69 visits of kings and emperors from the 10th to 12th century when Quedlinburg was the palatine seat of the German kings during Easter. Another example of a dysfunctional family event took place during the Synod of Quedlinburg 1105 where Heinrich V plotted with a bunch of Saxon nobles to dethrone his daddy Heinrich IV of Canossa fame (and on top of the Most Unpopular Persons lists in Saxony). Heinrich V made a lot of promises he was not going to keep the moment he became king and emperor. Serves the nobles right to be so naive.

A little story of the local history involves the Counts of Regenstein. There was a quarrel between one of them and the Bishop of Halberstadt about some territorial rights, and Quedlinburg gained brownie points - and a fine ransom - when it managed to take the Count of Regenstein captive. 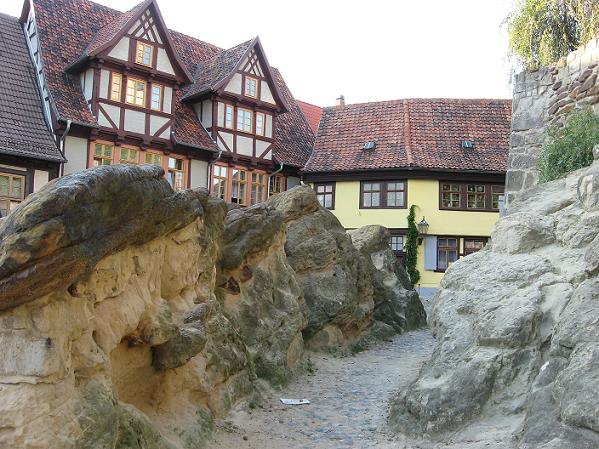 A lane at the foot of the Schlossberg
Nothing is left of the palatine castle today, and the beautiful Romanesque chapter church had a scaffolding on the outside, so I only got some inside shots. Illegally, because there was a Photographing Verboten sign. I understand the charge of an extra fee for photographing, being asked to not use a flash, and not disturb church services, but I don't accept a ban just because people think they can. There were but five tourists inside, and I didn't use a flash, so I took Heinrich the Quarrelsome as example and shot a few pics when the guard woman didn't look. I had a much better experience in the palatine castle in Goslar; when I asked the supervision lady if I could take two or three shots to share with my American blog readers, she allowed it.   ¶ September 17, 2008

Comments:
So quaint and charming - especially the Town Hall and Marketplace.

Fascinating history, and the photos are beautiful. The town hall and the market place are just gorgeous!

What a gorgeous place, and fascinating history!

You've got to love those dysfunctional familes! Where would history be without them?

Fantastic buildings though - that town hall is in such good condition for its age!

My friends just got back from Germany, and they noted that it was almost always impossible to take a picture inside anything!
Admittedly, she was used to Italy, where you can pretty much take any pic you like except in museums. (She DID say that unlike Bruges, where a Euro discretely left for the guard will allow you to photograph anything, this didn't seem to work anywhere in Germany)

Stag, in some cases there's a reson, like in the Palatine Castle which has light sensitive murals and it's almost impossible to get people to NOT use a flash. So they forbid photographing entirely. In some places, you have to pay a fee (not a discret Euro) but a regualr one and you'll be left with instructions re. using a flah and such. The Quedlinburg case was the first I've encountered and you see I gave shit. ;) East-German power play - some people still live in the past.

Lovely photos, and the history is great stuff! Are the German Heinrichs as popular in German TV shows and novels as the Tudors are over here? There's at least as much material...

Carla, no Heinrich show here though I agree they would offer plenty of material. Heinrich IV even attracted rumours of being gay because he didn't consumate his marriage until the Pope told him to. We could probably find him a pretty boyfriend for a TV series. :)

I've just stumbled on to your website and am so very excited. I'm a published author of historical fiction and am currently writing a trilogy of Heinrich the Fowler and his son Otto the Great. I've been researching since 2002. Your blog will be an immense resource. I've added your link to my own websites and blogs! I commend you on such a lovely blog.

Thank you very much, Michelle. Now I have to dig out more info about those German emperors. :)