23 Nov 2008
XXL Cauldrons, or How to Feed 600 People
Lady Despenser has some interesting posts about the offices in the king's household at the time of Edward II (here and here). A good number of those jobs were somehow involved with feeding the king and the royal household, and that reminded me I have some pics of what remains of the kitchens in Caernarfon Castle.

The kitchen was situated between King's Gate and Well Tower, using the curtain wall as outer wall, and opposite the never finished great hall. The way would have been short but with the Welsh rain (it was one of the two rainy afternoons during my stay) there would have been need of special umbrella bearers nevertheless. 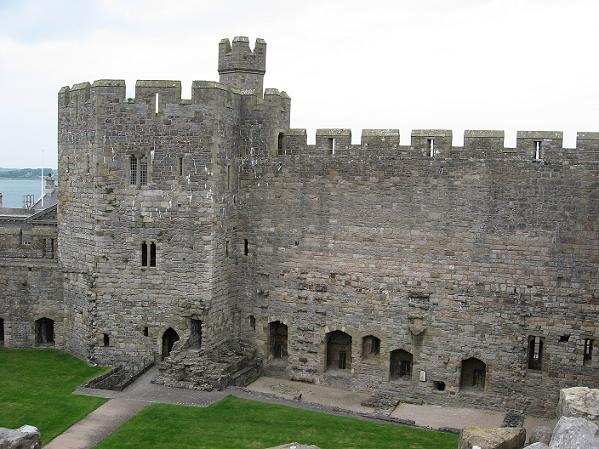 Curtain wall with remains of the kitchens, and the Well Tower (left)

The rather flimsy foundations of the courtyard site wall shows that the kitchen was intended as preliminary structure. At the time of Edward I, with construction work still going on in Caernarfon, there were about 600 people to feed every day, staff, servants (some 350 of those alone) garrison, and workers.

One of the features planned but never completed was a dock at the Well Tower that would have allowed to bring in waterborne supplies via the - then waterfilled - ditch. The entrance was to be defended by two sets of gates, portcullis and murder holes. Supplies were stored in the basement and the lower ward where the granaries and larders were located. The staircase was wide enough for two porters to pass side by side. 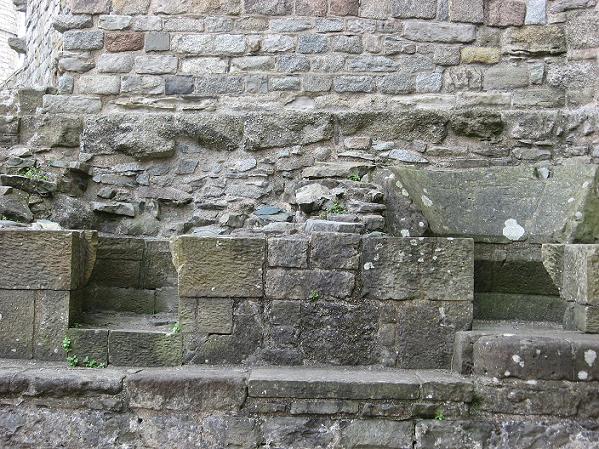 Settings for the cauldrons in the boiling room
An important part of the diet was boiled meat. There was a separate boiling room for that purpose with settings for two XXL cauldrons atop a stone furnace. The boiling room - adjacent the Well Tower - was separated from the kitchen proper by a thick wall into which a hearth was built. The connection between boiling room and kitchen went through a passage in the curtain wall which also held the pipes for water supply from the Well Tower. The well was about 50 feet deep.

Not visible on the photo is the special storage space for herbs and spices in the wall of the Well Tower. Since some of the spices were very expensive, I can imagine that closet was securely locked. 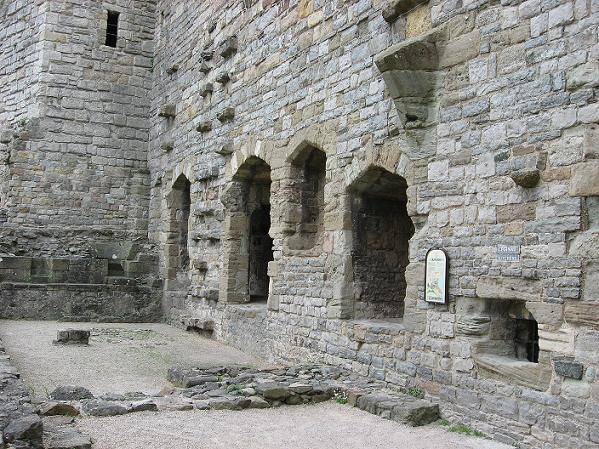 View towards the boiling room from the accomodation room
Toothings for the separating wall and foundation of the fireplace can be seen in the background, the passageway openings at the side. The water supply was gathered in a bassin (the smaller opening; it's very weathered today) and waste was disposed through the hole near the ground in the room in the foreground. The accomodation rooms took up two storeys; there's a staircase in the curtain wall.

The Cadw guide book doesn't specifiy who occupied the accomodation rooms, kitchen staff or guests. The advantage would have been that the rooms were warm with the fireplaces and the chimney the remains of which can be seen in the foreground of above picture, but being housed in the Eagle Tower surely held greater prestige. Maybe it was staff and poor guests like pilgrims.

The meals for the king were not prepared in the main kitchen but in a separate room in the Eagle Tower, near the king's appartment. This seems to have been a non-permanent arrangement as well. He also had his personal cooks - or should we call them chefs, lol? 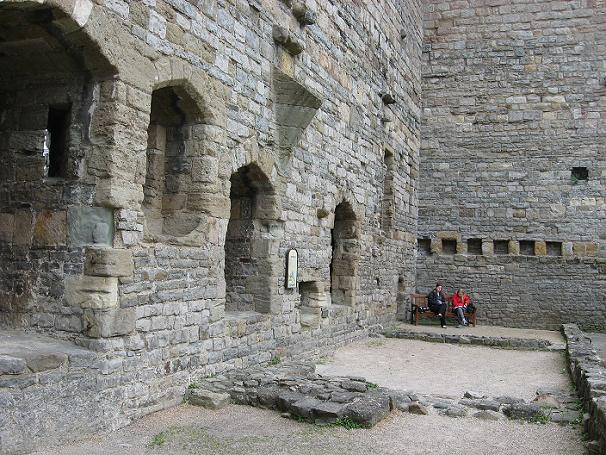 View towards accomodation rooms from the kitchen
The ground floor of the Well Tower held the counting house, the central financial office of the royal household. Here the steward, the treasurer and the controller would meet every day, assisted by he cofferer who collected funds and provided money for purchases. Plus a bunch of clerks, of course. Money spent on fresh supplies, and things taken from the stoes were controlled as well as the number of meals given out, and every evening the accounts would be compared - without the use of Excel and other useful programs. If a cook could not explain any difference, he'd be fined heavily.

Now we only need Elizabeth Chadwick to come up with a Mediaeval receipe to go with those posts. Preferably one that doesn't require an XXL cauldron.   ¶ November 23, 2008

Comments:
I wish modern day architects put as much thought into their designs... kitchens first!

I wonder how much time took the food to boil. Or to be prepared :)

Thank you for sharing this wonderful information on medieval castles and ways of life. A bounty for anyone seeking historical events or for substance into their stories.

That was a really interesting read! Obviously the kitchen was extremely important. It never occurred to me HOW important until now. Great pictures, too!

I can imagine what a huge undertaking it must have been for the cooks to make meals for that many people each day.
The kitchen areas always fascinate me.

Constance, I would prefer to have the bathroom first, but there's no mention of that place at all.

Dark Wolf, with seom 350 servants around, chopping meat and onions was not the problem, I think, but boiling the stuff may have taken several hours.

Thank you for your kind words, Barbara.

Well, Meghan, no one wants to go hungry, not even Alexander the Great's army. :)

Shelley, a bit like the restaurants in big company buildings, in case you have those in the US or NZ. Or university dining halls - we have six of them in my town that can feed some 20K students.

Do you think they intended to build a corridor between the kitchen and the great hall when they finished the great hall? Or were they always going to put up with scuttling across the yard in the rain? Can't imagine that would have done the subtlety any good, even with an official umbrella bearer on hand :-)

Carla, since Caernarfon Castle looks like an overweight 8 and was intended to be separated into two wards by a wall from the King's Gate to the main hall, they could have sneaked a passage in, but the whole middle structure was never completed.