16 Jan 2009
Roman Pottery
I'm not a specialist in Roman pottery, but I've seen enough of it to get an image what a Roman table may have looked like. I've also eaten from the replica of Roman tableware in restaurants that serve Roman dishes. Which make for some interesting taste experiences, but that's another topic. (And no, stuffed dormouse was not on the menu, lol.)

The terra sigillata style Roman pottery was a mass product; shards of it can be found pretty much everywhere the Romans stayed for longer than an hour, and trade spread it even outside the spheres of Roman influence. 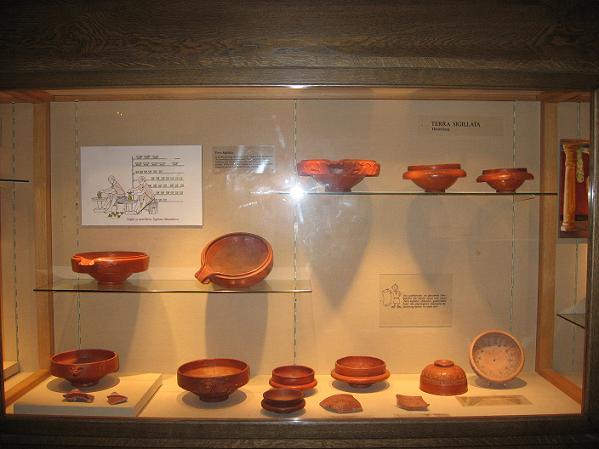 What struck me as an interesting variation when I visited the museum in the Saalburg Fortress was another shelf with larger pots which were decorated with faces. I filed them under the Odd Things Roman category and pretty much forgot about them. Until I today came across a post in Adrian Murdoch's Bread and Circuses blog, linking to an obituary of Jill Braithwaite, an archaeologist specialising in those face pots.

Face pots can be found all over the Roman empire in the wake of the movements of the army. The Saalburg displays are finds from the area. Turns out they have nothing to do with food storage (like the amphorae also displayed in the museum). 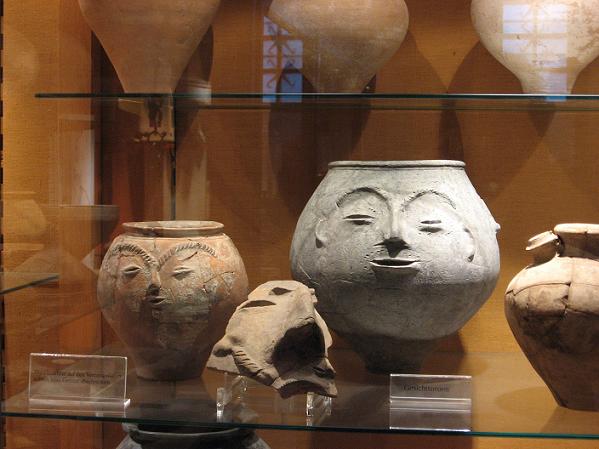 Face pots (Saalburg Museum)
Obviously, at least some of those pots are connected with cremation burials. Sometimes, remains of human cremations have been found, and some pots were clearly located in cemeteries. The tradition stems from Italian burials where a number of pots display the face of Charon. It seems that the types of faces, often leering and grotesque, became more variable with further distribution, and local styles developed.

Another interesting aspect Mrs Braithwaite was exploring is the discovery that the style of those pots did not disappear from an area after the army left but lingered on in the civilian settlements. Someone else will now have to research this aspect further.  ¶ January 16, 2009

Comments:
The quality and care that go into making ancient pottery always astounds me. I mean, I don't know how the Greeks and Romans managed to make such sturdy yet beautiful pieces (well I mean I can read about it but there's something still elusive about the whole thing, you know?). I love the photos, btw!

An interesting post. I remember seeing decorative pots and urns in the Egyptian museum that held organs after the mummification process.

I just posted my own photos:

Face pots always intrigued me, and I'm glad I have the answer now, but sad about Jill Braithwaite.

Interesting. I had not heard of these pots before.

Terra sigillata is what I know as samian ware, isn't it? It certainly turns up in large quantities, anywhere and everywhere. I can see why, because it's rather attractive stuff. I wouldn't mind a fruit bowl or a platter or two in it.

Interesting that some pots used for cremation burials display the face of Charon. A sort of ticket to the afterlife, maybe. I wonder if the various traditions of burying cremation ashes in a decorated pot (e.g. Anglo-Saxon cremation urns) are connected with each other, or share some sort of common heritage?

Meghan, despite the work that goes into it, the Roman sigllata counted as mass production. Lots of busy slaves, I'd say. ;)

Shelley, burial practics are a fascinating topic. I got caught on history by a bronze age skeleton, full with bracelets, a knife and other things. :)

Thanks for the link, Irene. We both picked the grey pot. *grin*

Lady D, they're fun, though. Sort of the predecessors of Medieaval monsters.

Carla, I won't exclude a connection between Roman and Saxon burial practics, but the two people didn't really meet in a way to exchange culture, so maybe there's a common heritage, rather.

The face pots are intriguing. Thanks for the history surrounding them.