19 Jan 2009
Roman Weapons
Since I came back from my visit to the Saalburg fortress in 2007 with a lot of photos; I got some more for you. How about a few sharp and pointy toys for the big boys? 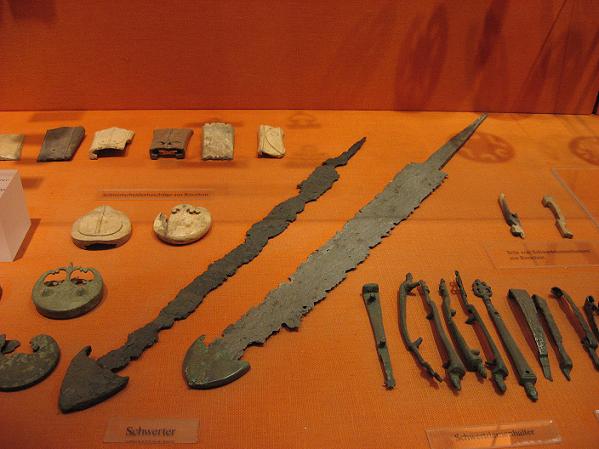 Roman swords of the gladius type, with metal (to the left below) and bone (upper rows left) sheath mountings, and sword strap buckles (to the right). 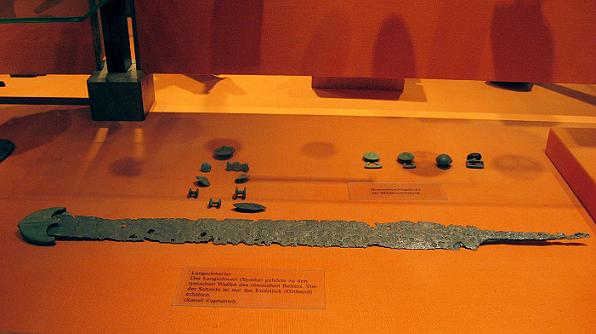 A spatha, a Roman cavalry sword. Those were longer than the gladius type and used to fight from horseback. In the later Empire, the spatha began to replace the gladius even for the infantry. 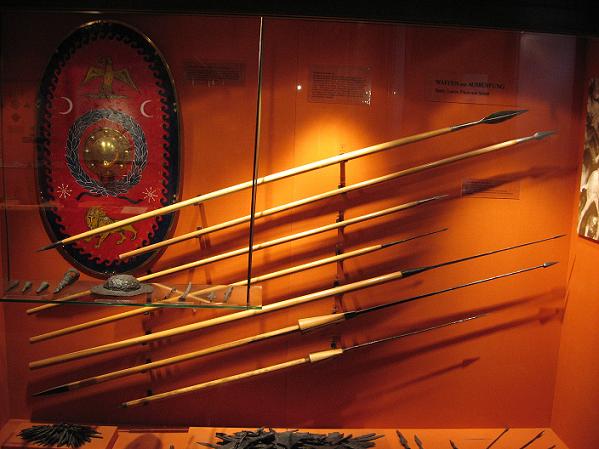 Btw, I found our friend Aelius Rufus. He was hanging out in the Leisure Centre in Caerleon, but I've dragged him home.

Comments:
Ooh, pointy things! Awesome. Next to catapults of mass destruction, pointy things are my favorite. I guess I shouldn't mention I have several reenactment spears and a wanna-be pilum by my front door...
No Mongol hordes are going to overrun my street, no sir!

I thought you had the corgies to deal with those. :)

Yeah, well, slight drawback to Corgis... they like everybody! Even Mongol hordes.

The boys in my blog (you'll understand when you see them!) got very excited by all the pointy objects. I'm having to lie them all down with cold compresses now!

Interesting pointy things! Now being the romance writer, I'd like to see the owners. Just for research purposes you understand. ;)

Shelley, I'm afraid the former owners would only be a fit in a horror story. ;)

You actully grabbed a Roman Centuran and dragged him. He must e getting soft in his old age. :- )

Oh yes, something very intriguing about those pointy things!
Not as sleek as the later rapiers, n'est pas, but impressive - very impressive! (I can just imagine one pointed at me!)

Lol Hank, no, Aelius is just an auxiliary soldier. When his father got discharged, he had reached the rank of decurio, so Aelius may be in for a promotion some day, but right now I'm the one who has the say. :)

Worse, Sam, a whole testudo of those Romans pointing pila at you. :)

Impressive photos. Did Aelius Rufus object, or did he come quietly?

Well, he is sulking a bit right now. After all the Saalburg has only your average border fortress baths while the legionary fort at Caerleon has a 42m long swimming pool, among other fun.

Ah...typical soldier, Roman or otherwise.....follow a bit of skirt anywhere.

I love your post. I've been away too long and need to catch up. The history is wonderful. Thanks, Gabriele.