22 Jul 2009
Staffa
The tour from Fionnphort / Mull to Staffa took place during some of the few hours of rain I had on my trip. The other one had been Inchcolm where I bought a rain cape in the gift shop (Historical Scotland knows why they sell those, lol), and it proved useful in the open boat to Staffa as well.

Staffa is a small island (200x600 metres) in the Inner Hebrides, famous for its unusual hexagonal basalt columns. It became a tourist attraction in the late 18th century after Sir Joseph Banks waxed poetic about its natural beauty that rivalled the temples in Greece. 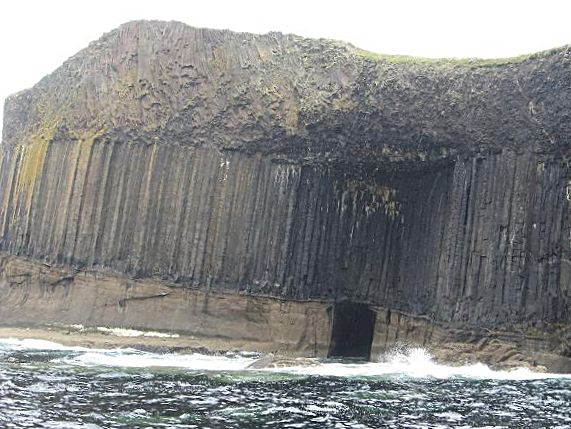 Staffa has severall caves (the photo above shows Boat Cave), the most famous is Fingal's Cave, named after James MacPherson's Ossianic hero Finn mac Cumhail in the 18th century. Its older name was An Uamh Binn - cave of melodies, because of the echos in the cave. Fingal's Cave is a sea cave (formed by the waves of the sea), 10 m wide and 70 m long, the walls consisting of the hexagonal basalt columns for which Staffa is known. 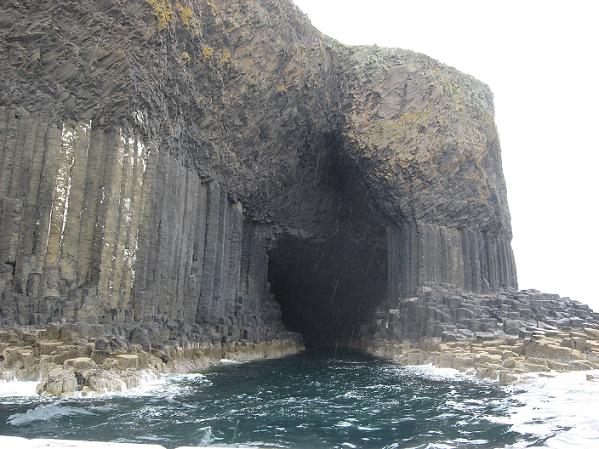 Fingal's Cave
At high tide the access is difficult because the boat has to land on the other end of the island, and the way to the cave is a small path of sleek stones along the cliffs with a rail on the inner side and the roaring waves a few metres below. It admit, I didn't dare to go, with everything wet and slippery, and stuck among a tourist group form Portugal who behaved like they owned the place, just to get some pics of the cave with lots of people getting in the way, and noise instead of echos. Some Swiss tourists came back and said the path was pretty dangerous inside the cave, and if mountain people don't like it, I think I can't be blamed for prefering to take the somewhat easier access to the top of the rocks instead (nor was I the only one). 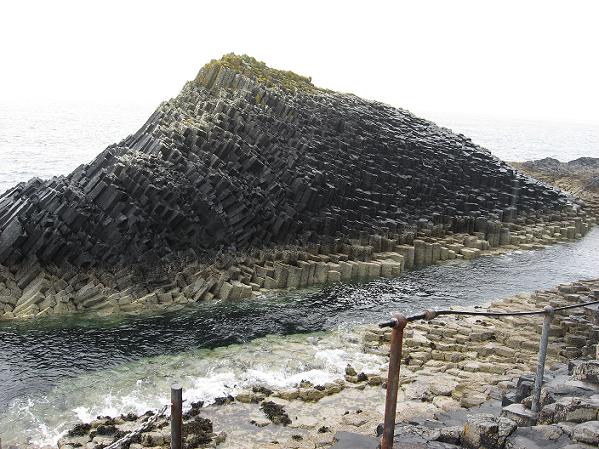 Am Buchaille
The origins of Staffa are volcanic, with a tuff basement, a layer of tertiary basalt and a top layer of basalt without a crystalline structure. The slow cooling of the second layer resulted in those almost polished looking hexagonal columns. That geographical feature runs under water all the way to Antrim in Ireland and is known as Giant's Causeway.

Staffa is named for those colums; the name goes back to the Norse word stafr - pillar. 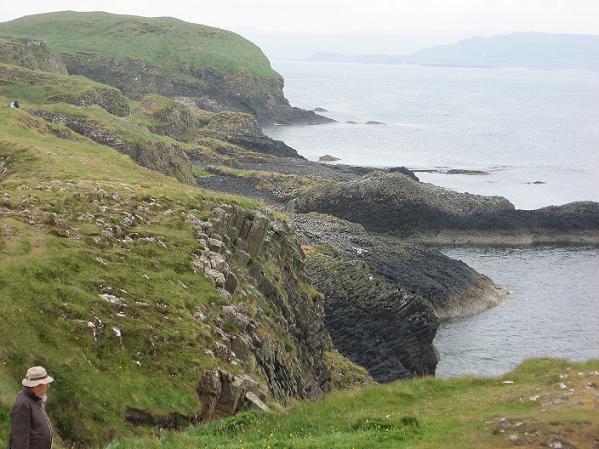 View from above
Staffa rises up to 42 metres above sea level and there is a layer of turf and grass on the top, enough to feed some cattle. The island is not inhabited today, but it was in the Middle Ages. The last inhabitants left because of the severe winter storms by the end of the 18th century.

On a clear day you can see to Skye, but the veil of rain only allowed for a glimpse of the Ardnamurchan peninsula. 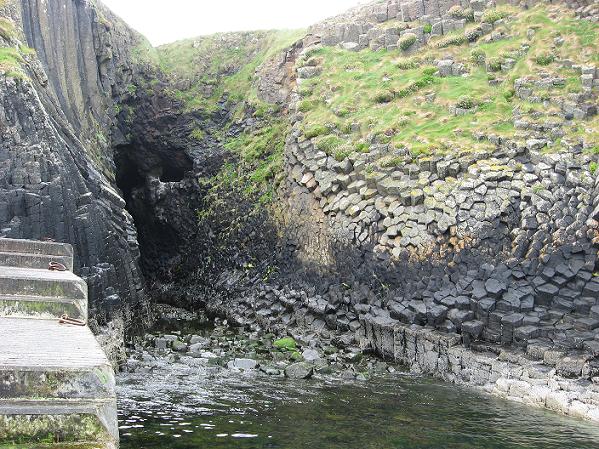 The harbour (with another cave)
Among the tourists visiting Staffa in the 19th century were Queen Victoria, Sir Walter Scott, Jules Verne, and in 1829 the German composer and pianist Felix Mendelssohn-Bartholdy (1809-1847) who - impressed with a very rough crossing as well as the echos in Fingal's Cave - composed the Hebrides Overture. Mendelssohn traveled to Scotland after spending a season in London as celebrated pianist and conductor. His music was banned during the Third Reich because of Mendessohn's Jewish descent. 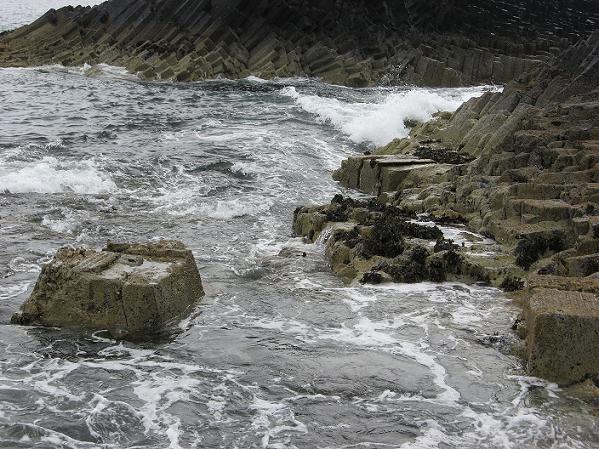 Tidal currents between Staffa and Am Buchaille
The tidal currents and eddies between Staffa and the rock formation called Am Buchaille are really impressive. Due to the black basalt underground, the water appears black as well, crowned with white foam where the waves break. I stood in the rain and watched for some time, imagining someone trying to land in a small rowing boat and how it must feel to be shipwrecked in such a desolate, rain- and windswept place.

But when the boat returned to pick us up for the trip to Iona, the sun came out, and the rest of the day was sunny and warm. Scottish weather, lol. 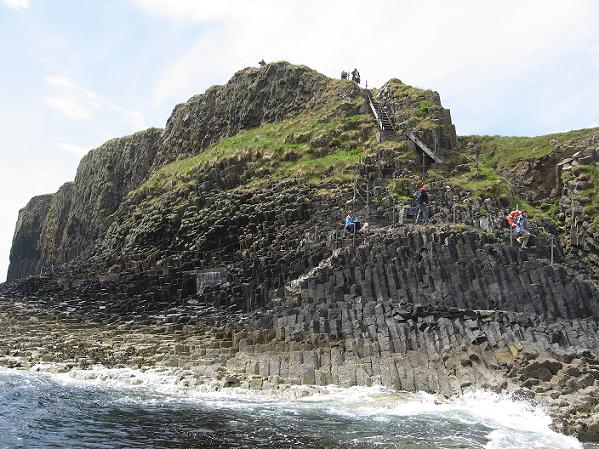 The sun comes out
The island had been in diverse private ownerships until 1986 when the last owner, one Jock Elliott from New York, gifted it to the National Trust for Scotland.

Cattle and deer have been removed from the island for the natural vegetation to recover. Today it is a nesting ground for puffins, kittiwakes, gulls and other birds, and in the waters play seals and dolphins. We saw dolphins on the way to Iona, but they were too fast to catch with the camera. 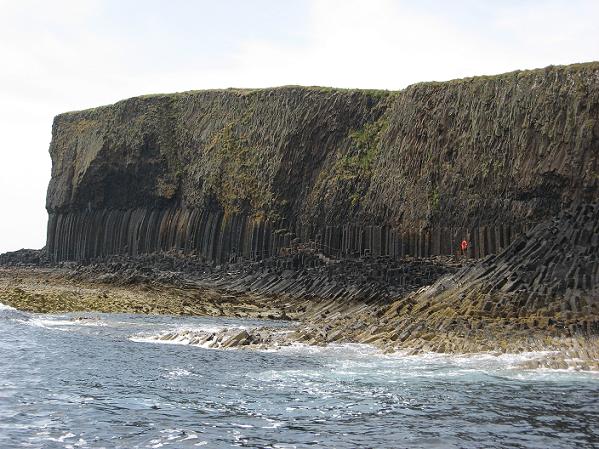 The Colonnade
German author Theodor Fontane, another 19th century Scotland tourist, had more luck with Fingal's Cave than I. He arrived in sunshine and in a boat small enough to be rowed into the cave itself. He desribed Staffa, the cave and the process that formed it in his travel diary Beyond the Tweed (Jenseit des Tweed).

I packed up my rain cape and got the camera ready for a farewell shot of Staffa: the basalt pillars of the Colonnade.   ¶ July 22, 2009

Comments:
Awesome formation, but you're right. There's no way I would walk around on them with out a death wish. Did you get any puffin pictures?

I noticed a lot of plot bunny tracks. *g*

Nice photos. Basalt can be as slippery as greased ice when wet, so I don't blame you for not going round to the cave. It loses its atmosphere a bit with the crowds, anyway :-) The top of the island is lovely, wide and spacious and seeming almost to float in free space with nothing but sea and sky all around. Were the puffins feeding chicks when you were there?

Fascinating post with great photos, and I understand why you didn't go down those slippery rocks to the cave.

What a fantastic place! Awesome rock formations. And no, I don't blame you for not going down those steps either - I'm not sure that I would have!

The rock formations look very impressive. I wouldn't have wanted to go down the path either! We often think of tourism as quite a recent thing, but it fascinates me to know that places I've visited have attracted sightseers for thousands of years. :)

Thank you, everyone. I'm glad other would not have walked along those cliffs, either.

Carla, I didn't get near enough to disturb them, but I saw a few puffins. Funny birds, they are.

Shelley, tourism really took off in the late 18th and the 19th century. Every gentleman took his Italy tour, and more exotic places became popular, too. And several travelers wrote diaries, like Johnson and Boswell, Goethe or Theodor Fontane.
The Harz mountains in Germany were a typical tourist destination, btw.

I can't stop staring at these pictures. The formation is just amazing. Great pictures!

Hi! I came across your blog when I was verifying a quotation from Ausonius' "Mosella" (the portion that begins "Quis color illa vadis . . . " for a post on my own blog. I've added you to my blog list so I can easily enjoy your articles again.

Thanks for posting the Staffa photos (and the other Scotland shots, of course). I spent a long Easter weekend on Iona in March 1989, but excursions to Staffa were not on the Abbey program! And howlingly awful as the weather was those four days, I suspect any such trips would have been cancelled, even had they been on offer. Your pictures provided me a vicarious visit.

The landscape is like it is from Tolkien illustrations. Surreal.

Hallo Kathy, welcome to my blog. Thank you for your kind words and glad I could be of help with the Mosella translation.
I think they cancel the Staffa cruise when the weather is too bad - those boats are not very large and open.

Hi dmarks, welcome to my blog, too. Yes, Staffa has indeed a surreal quality. It makes for a great setting for a novel scene or two. I already have an idea. *grin*

Thank you for posting this. I have never seen photos of this place before. It seems a bit formidable. I can only imagine what those 18th c. inhabitants must have gone through. I found this a fascinating post.