The castle looks forbidding from the outside, but it's actually a nice place to visit on a sunny summer afternoon. And because someone is bound to ask - yes, there was a plotbunny hiding in the entrance archway. :) 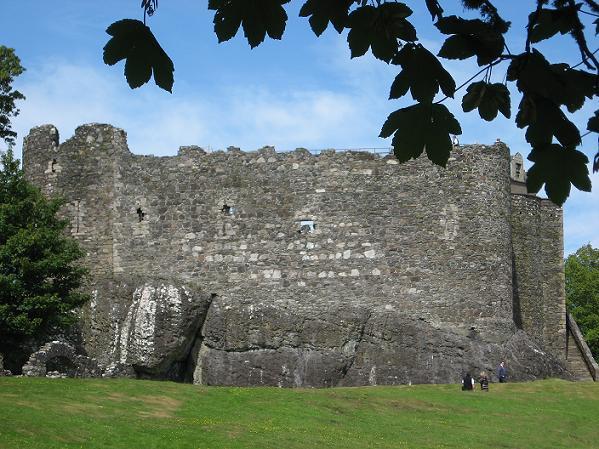 The rock foundation and castle walls rise to 15 metres and more, with the entrance several metres above ground. In former times, the way between the outer staircase and the gates was additionally protected by a drawbridge. Definitely not an easy place to get into back in the Middle Ages. Today you only need to pay your fee in the house outside the castle, ascend the stairs and cross a solid wooden bridge, without danger of someone shooting arrows at you from the - now completely ruined - corner tower. 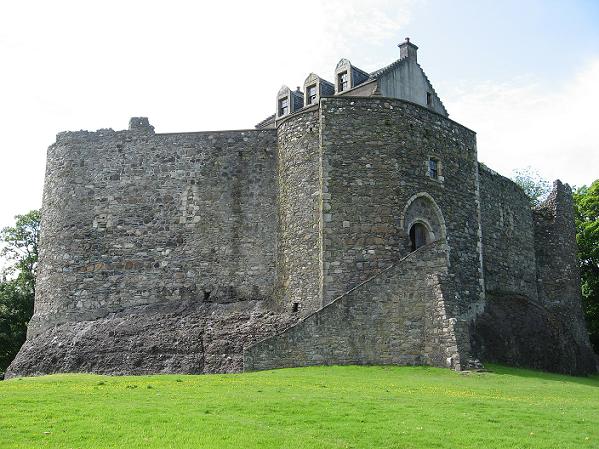 Dunstaffnage, entrance
Dunstaffnage, bearing a name part Gaelic (dun = fort) part Norse (stafr-nes = staff promontory), is one of the candidates for the Dalriatan seat of Dun Monaidh, albeit no archaeological proof has been found so far. In 840, Cináed mac Alpín 'united' (I doubt the Picts saw it that way) the Dalriatans and Picts and moved the centre of power to central Scotland, leaving a vacuum at the west coast into which the Vikings stepped. Their rule over the west coast was officially acknowledged in the treaty between King Edgar of Scotland and King Magnus 'Barelegs' of Norway in 1098. 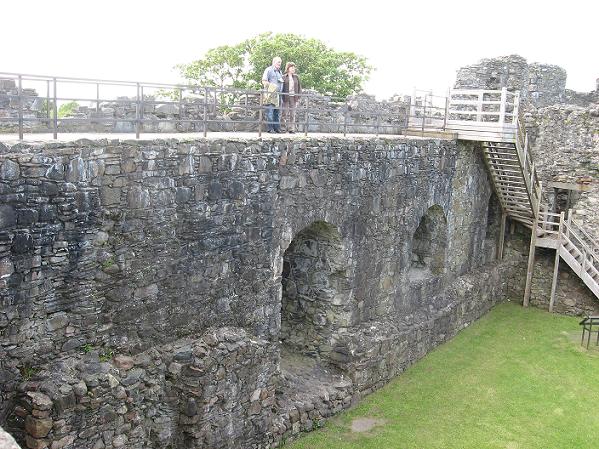 Battlements
But the local élites didn't really care for one king or the other, and in mid-12th century a man of mixed Gaelic/Norse descent ruled more or less independently: Somarled or Somhairle, King of the Isles as he called himself. His son Dougall became the founder of clan MacDougall. He inherited the mainland of Lorn along with the islands of Jura, Coll, Mull, Tiree, Kerrera, and Lismore after his father's death at the battle of Renfrew 1164. His Gaelic name Dubhgall means something like Dark Foreigner, implying his part-Norse blood. His brother Ranald (Reginald) inherited the possessions in Skye (after he killed his brother Angus), Islay and Kintyre - as far as I can make sense of the mess of contradictory information. Ranald's son Donald woud become the eponymous founder of Clan MacDonald 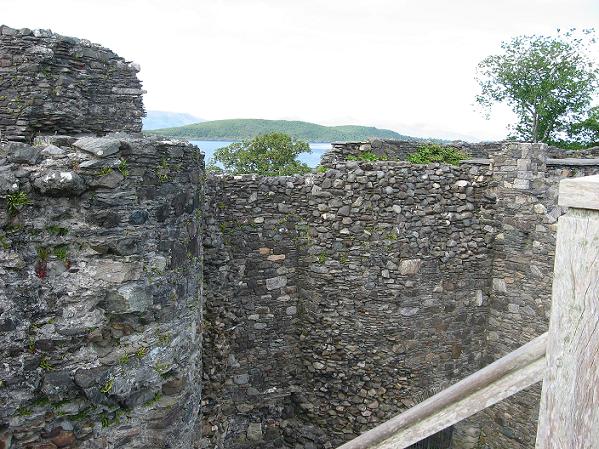 Battlements, view to the west tower
The water in the distance in the Firth of Lorn
Dougall's son Duncan built Dunstaffnage Castle around 1220, and probably Dunollie Castle as well. He sided with King Hakon of Norway against King Alexander II of the Scots in 1230, conquering Rothesay Castle from Walter Stewart, but in 1237 seemed to have made his peace with Alexander. He was the only noble from the west coast to sign a document sent by King Alexander to the pope - he signed it as de Ergadia (from Argyll). Besides the castles at the coast he also founded Ardchattan Priory in 1240. 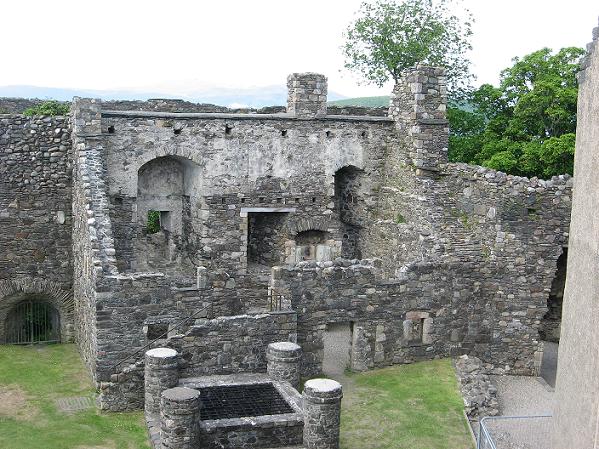 Remains of the 'new house', built in 1725
His son Ewan who succeeded Duncan in 1248 was in a nice pickle since he held his island possessions under Hakon of Norway after a visit to Bergen during which he also got granted the title King of the Isles, and the mainland territories as vassal of King Alexander II. After Ewan was also appointed to step in for the deceased king of Man, Alexander had enough of the Norse power concentration on the isles and sailed west with an army, landing on Kerrera. He demanded that Ewan surrender several castles to him, among them most probably Dunstaffnage which Ewan had further fortified (he added the west tower). But Ewan told him he'd already done hommage for the those lands to Hakon. "No man can serve two masters," said King Alexander. "One can quite well serve two masters provided the masters are not enemies," was Ewan's reply. It's probably well for him that King Alexander II died of an illness soon thereafter (July 8, 1249) or he would have been in trouble. 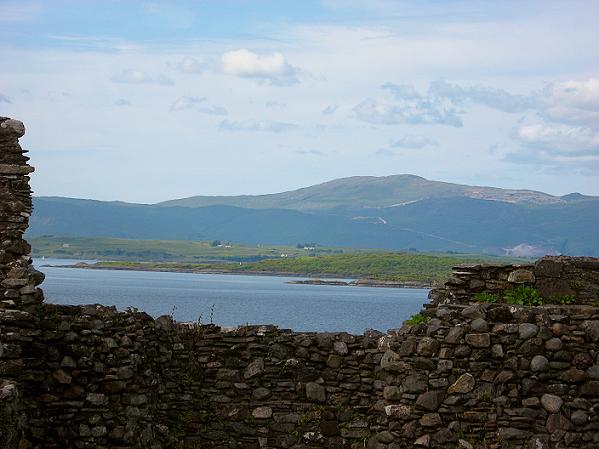 View from the battlements over Loch Etive
For several years, the stalemate continued until Alexander III reached majority, told his advisors to go fishing and began his reign. His activities on the west coast soon forced Hakon to bring in a large fleet. He too, landed on Kerrera and detained Ewan as 'guest' in hope to pressure him for support. But Ewan must have had a stubborn streak because he refused Hakon's demand as well. King Hakon then lost the battle of Largs in 1263 and part of his fleet in the autumn gales, and withdrew to the Orkneys where he died the same year. Negotiations between King Alexander III and Hakon's successor King Magnus took another two years. During that time Ewan proved sly as well because he seemed to have simply outwaited the results before deciding for one side. 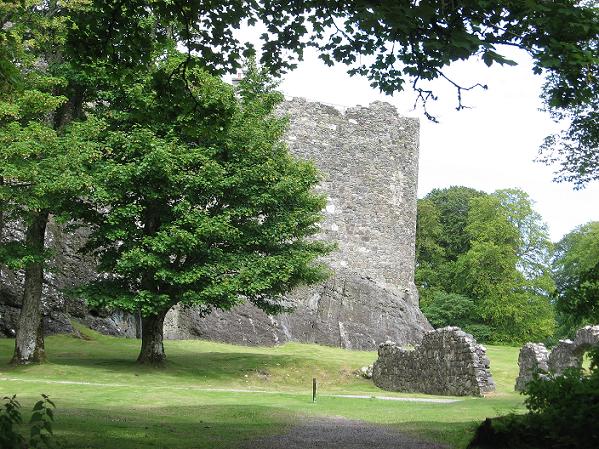 Dunstaffnage Castle, seen from the way to the chapel
The ensuing Treaty of Perth in 1266 transferred the Hebridean islands from Norway to Scotland. Ewan had his possessions restored (if he ever lost any of them in the first place; the sources are none too clear) though the title King of the Isles went to the MacDonald branch of Somhairle's descendants. Ewan clearly sided with the King of the Scots now, marrying his children into major Scottish families. His son Alexander Lord of Lorn would become one of the chief powers in the west. Ewan mac Dougall died in 1266.

Information: Historic Scotland guidebook to Dunstaffnage Castle and the website of Clan MacDougall.

Continued with the Wars of Independence and The Campbells.  ¶ August 09, 2009

Comments:
Hi Gabriele. I am always visiting here but rarely leave a comment. Figured its about time I did just to let you know that this is one of my favourite sites!

Thanks for the informative commentary as well as the lovely pics!

A terrific site. We were there a month ago. Greetings from Wales, another land of castles.

Cinéad mac Alpín 'united' (I doubt the Picts saw it that way) the Dalriatans and Picts...

I reckon some of the Picts did; but only some... And don't worry about not being able to make sense of Somhairle, this is perfectly usual.

Hallo Pam,
welcome and thank you very much for your kind words.

Hi Caroline,
welcome to my blog. You got some lovely blogs yourself - I've added the Land and Lit one to my sidebar. Who can resist Vindolanda photos, lol. I've been to Wales last year; you really got some whoppers of castles there.

Jonathan,
I read that book some years ago, and the memories of that combined with the contradictory statements about who inherited what gave me some idea, though I still wonder what happened to the kingship of Man under Dougall, and why Ranald would get Islay and Kintyre and then the parts of Skye in Gaelic possession; they're pretty separate geographically. And don't get me started on who had the title King of the Isles, lol. I don't think Ewan just gave that one up; there must have been more behind it.

That's an impressive site for a castle, even by Highland standards. Lovely photos, as ever. I should think Ewan was playing both sides against the middle and looking to maximise his own profit; and the situation probably rarely stayed the same for five minutes together :-) Is Alexander Lord of Lorn the one who was Robert Bruce's enemy, or have I mixed him up with someone else?

It's that Alexander, Carla. That's why I thought he and his son John deserve their own post. :)

The castle does look forbidding from outside, but the view looks lovely.

I can't believe how many Scottish castles I've never even heard of, let alone visited. Thanks, Gabriele, for bringing them to our attention with such lovely pics (or should that be 'picts'?!

Thank you, Lady D. There are a lot of castles in Scotland - I know how many I missed because you can't see everything in two weeks. ;)

Yesh, you need a trebuchet to launch troops just to get INTO the castle... because I think I'd be knocking on the walls a long long time otherwise. :)

Lol, yes they would. You really can't look at one of my castle pics without thinking about how to knock it down or at least get your troops inside it. You got some Medieaval mercenaries in your family tree? *grin*

Well, probably some condottieri on the Italian side, and the Scottish side were MacIntyres, who fought with the Campbells...against the MacDougalls... Just sayin'. :)

I think when the Campbells hooked up with the MacIntyre, they already had Dunstaffnage in their posession, but I'll have to look that up.