21 Nov 2009
A Sunny Day in Kilmartin Glen - Dunadd Hill Fort
One morning I took the bus from Oban to Kilmartin Glen and asked the driver to drop me off somewhere in walking distance of Dunadd Hill Fort. That's the nice thing about busses in the UK, the local ones will drop you off and pick you up where you want. 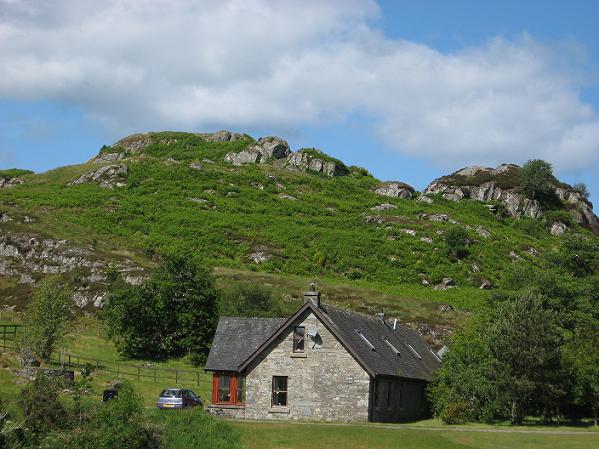 Kilmartin Glen is a place rich in ancient remains, mostly cairns and standing stones, though I didn't have time to see more than a few of those. What I had on my list first of all was the ancient hill fort of Dunadd. It is part of a hill strewn with boulders that sits in the middle of the Mòine Mhòr, the Great Moor, near the village of Lochgilphead, offering a good view to all sides and thus making for a perfect defensive position. It's no easier to get to the summit today than it was in former times. I didn't bring my trusty walking stick which proved to be a bit of a problem. Fortunately, there was a nice couple better equipped for hiking that lent me a spare one. They also gave me a ride to Kilmartin later albeit it was out of their way - there's still a lot of hospitality and kindness to strangers in Scotland. 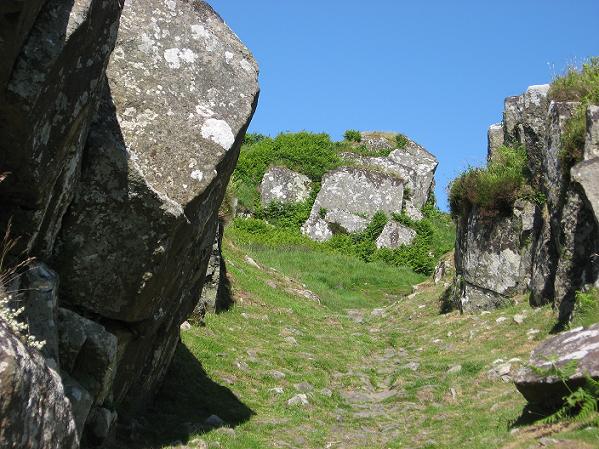 The way up the hill (one of the easier parts)
Dunadd has been occupied since the Iron Age and later became the seat of the kings of Dál Riata. As so often in early history, dates and details are not known or not agreed upon, or both, but it is mostly assumed that Dunadd became the main seat of the Dálriatan kingdom in the 5th century under Fergus MacErc and his two brothers, invaders from Ireland. That is if we don't consider the migration of Cairpre around 400 as the starting point of the Dálriatan kingdom. But he probably didn't hold Dunadd. 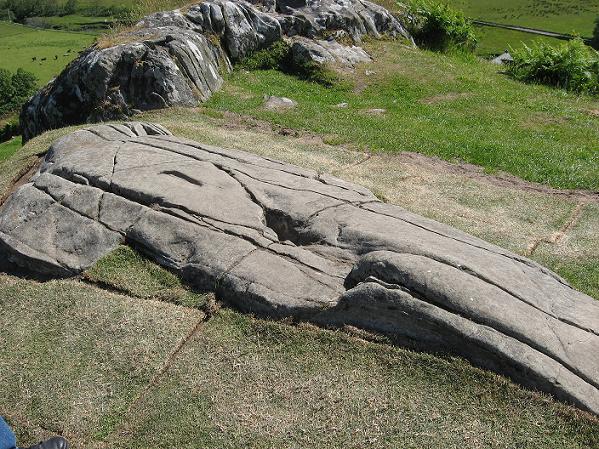 The famous footprint (left) and basin (middle)
At the time of the Dálriatan kings, there was a stone fort on top of the hill, defended by natural rocks and perhaps some additional man made ones. It was no fun trying to climb that place when people threw pointy and heavy things at you - it's difficult enough without that. Which doesn't keep tourists from going there and walking through photo shots. What remains of the old ruins is mostly the famous stone with the carved footprint and basin, which are said to have been used during the inauguration ceremony for the kings of Dál Riata, though we don't know any details. It's assumed from the interrpetation of an ogham inscription that the king had to step into the footprint, but for what reason can only be guessed. 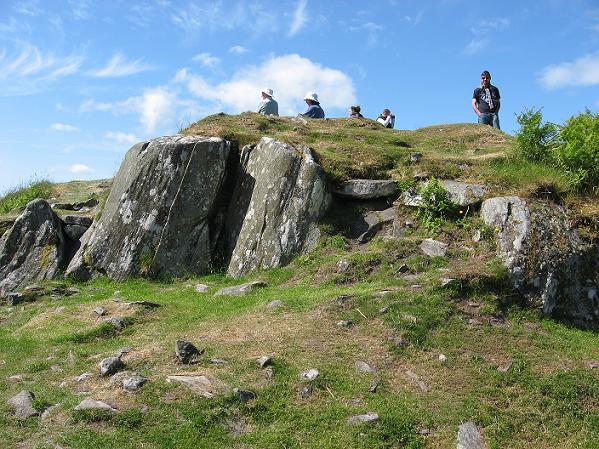 The summit with remains of the ancient fort (and tourists)
Legend also has it that Dunadd was the original place of the Stone of Scone which was later brought to Scone near Perth where it was used in the coronation ceremony for the kings of the Scots until Edward I took it to Westminster as booty in 1296. The stone was returned to Scotland in 1996 and is now kept in Edinburgh Castle. But no one can be sure where that Stone originally came from though it has made quite a career for a mysterious slab of red sandstone. 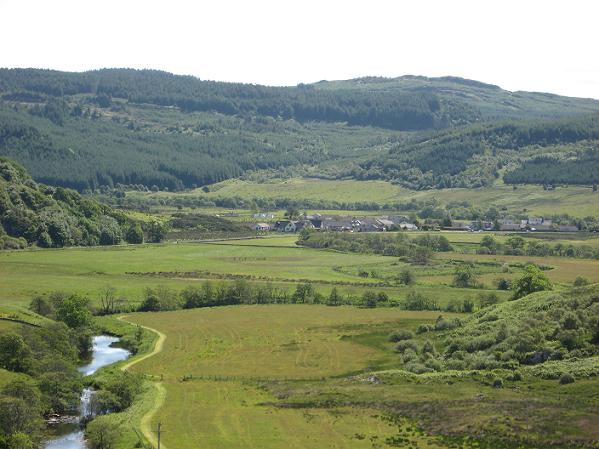 View over Kilmartin Glen
According to the Annals of Ulster (AU 741.10) in 736, "Óengus son of Fergus, king of the Picts, laid waste the territory of Dál Riata and sized Dunadd [...] and bound in chains two sons of Selbaig, king of Dál Riata." The names of the sons are Dúngal and Feradach. The fort may have been difficult to conquer but not impregnable. Óengus mac Fergusa was a powerful king of the Picts for some twenty years who expanded his realm to a considerable extent. He is mentioned also in sources outside the Irish/Scottish ones, like the Welsh Annales Cambriae and the Historia Regum Anglorum. Got some attention, the guy. There are discussions about the importance of Óengus' connections to Irelands and their importance for the merging of Picts and Dálriatans before Cinaéd mac Alpin. I'm tempted to get back to Óengus and the unfortunate sons of Selbaig who obviously had to do without the support from Ireland that had aided in the rise of the kingdom of Dál Riata. 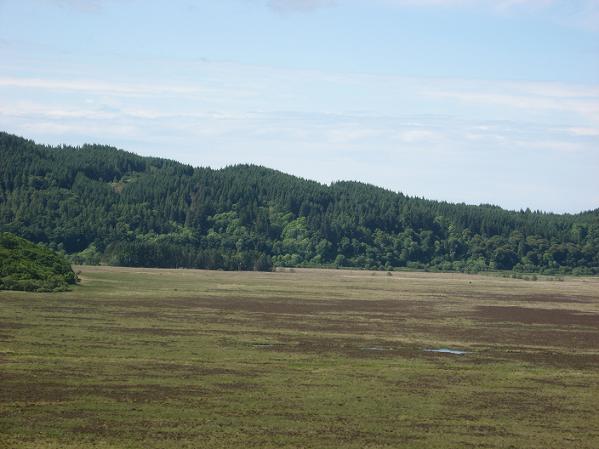 View to the other side of the glen (you can see the bogs here)
Another important time in the history of Dunadd was the reign of Cináed mac Alpin, King of Dál Riata (also called King of the Scots) finally defeated the Picts and merged both people in the kingdom of that would later become Alba. Cináed claimed descent from both royal lines, though his ancestry is not clear from the sources. The Picts had subsequently lost power, to a good extent due to the Viking attacks, while Cináed obviously had a better hand in dealing with them. The official date for the end of the Pictish kingdom is 843, and for some years Dunadd was the political centre of the new, 'united' kingdom, until Cináed moved his seat to Scone (and maybe took the mysterious Stone with him). Cináed is another historical character who deserved his own blogpost. *sigh* 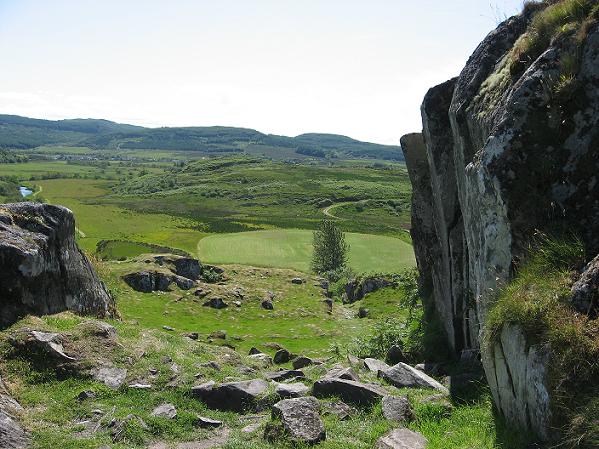 The path downhill, with another view of the glen
There have been three official excavations in Dunadd which brought to light brooches and metal workings that can easily be associated with the seat of a king. Some of those, plus carved stones and other items from the Iron Age and Pictish and Dál Riatan times are displayed in a museum in Kilmartin.  ¶ November 21, 2009

Comments:
I was admiring the steep slopes, thinking about how I would scale them, and as my eye moved up the side of the steep cliff, some clouds in the background suddenly came into focus, and revealed themselves to be GIANTS. No wait...those are tourists!
A bit of a psychic shock...that insurmountable cliff turned out to be much lower than I thought it was.

Wot a maroon! Ah well. Will have to make it there sometime soon.
Got any posts-pics of Nottingham Castle? I'll be there in three weeks.

The boulders and standing stones are very interesting to look at, and consider the ages they have stood there. The scenery is lovely. When I was last in Scotland, many years ago, I found the people to be quite friendly and helpful too.

Wow, what a neat place. My engineering mind was consumed with glee at the thought of the fortifications I could build. (Note: build, not destroy...) Thanks for making the climb up, Gabriele. Loved the look around from the top.

What a fascinating place! Lovely to hear of your positive experiences with such friendly, helpful people, too.

Did you make it to the Museum at Kilmartin? If so, is one of the things they have there the symbol stone that's 'supposed' to have been out up by Oengus at his conquest? Because if so you should very much blog it as an addendum. If not, I wonder where it is? Or if I'm just confused? (I ought of course to know, but a rapid flip through nearby books doesn't answer...)

Great photos, as always. Kilmartin Glen goes way, way back into the distant past, doesn't it? It's extraordinary to go somewhere like that and think of all the people who've come and gone over thousands of years.

Nice photos, Gabriele. But it doesn't look like November in Scotland!

Lol, Stag, the rocks on the summit with the tourists on top are only part of the whole fort which took up pretty much the entire hill.

Constance, what's the matter with you, lol?

Thank you, Barbara and Alianore. It's a lovely place indeed.

Jonathan, I've been to the museum. Need to sort through the pics I took, though I can't remember an Oengus stone in particular.

Carla, for a historical fiction writer, the place is full of plotbunnies. :)

Antoninus, I took the photos back in June. ;)

I must admit, I really enjoyed seeing the pics of blue sky and sun in such a dreary and rain-soaked November. It looks a lovely place.

That carved footprint - how big is it in relation to a normal human foot?

I shall look forward to that, Gabriele. I forgot to say how excellent these photos are, too, but your photos always are, it *almost* goes without saying :-)

Lady D, not that large, actually. It would fit a normal man's foot.

I did not spend nearly enough time in Scotland. Thank you for showing me something I missed.I learn so much here!

Hi Pam, welcome and thank you for your kind words. There's so much to see in Scotland that not even several months will cover it all - one of the reasons I keep going back.

I have missed your photos.
These are wonderful.
(They remind me my name is Harris)

Bernita!! Long time no see. Welcome back to the world of bloggers.