20 Dec 2009
Roman Playmobil Fun
One of the features of the exhibition in the LWL Roman Museum in Haltern am See was the display of three legions of playmobil Romans spread all over the museum. The 15,000 figures were to demonstrate the number of Romans marching through the German forests towards their doom. 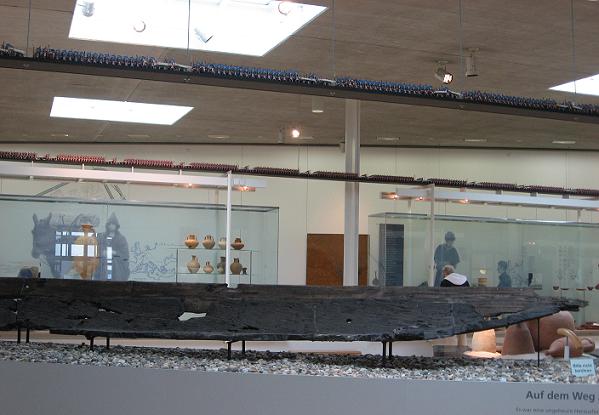 A part of the Roman army on the march can be seen in the middle of the photo (the red guys in the background), another in the upper part (blue ones) - both on boards suspeded from the ceiling. The greater part of the marching column walked on boards above eye height and was a bit tricky to photograph. I managed to get some acceptable closeups, though. 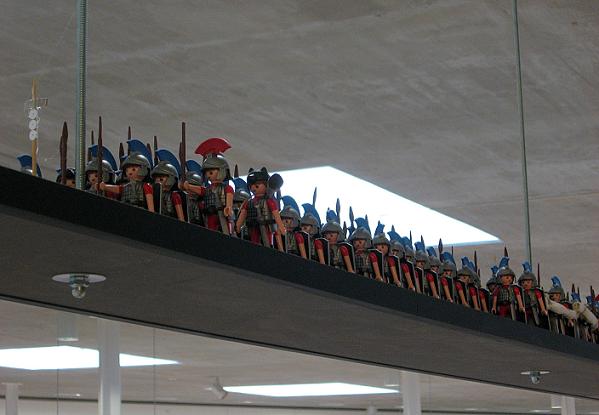 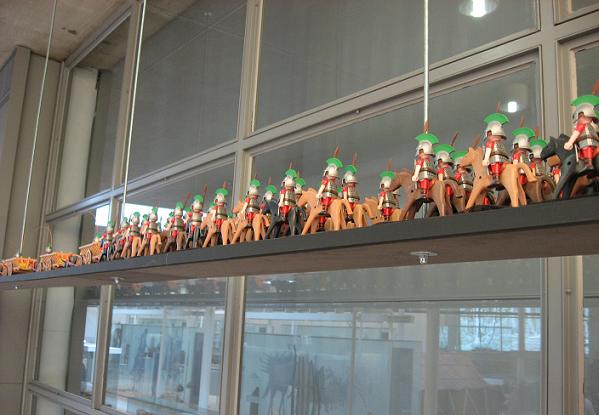 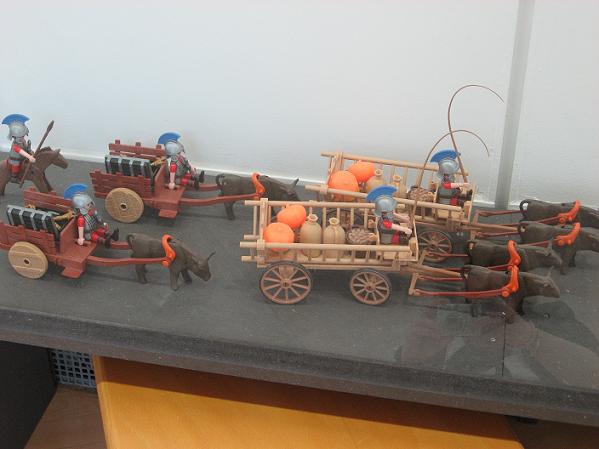 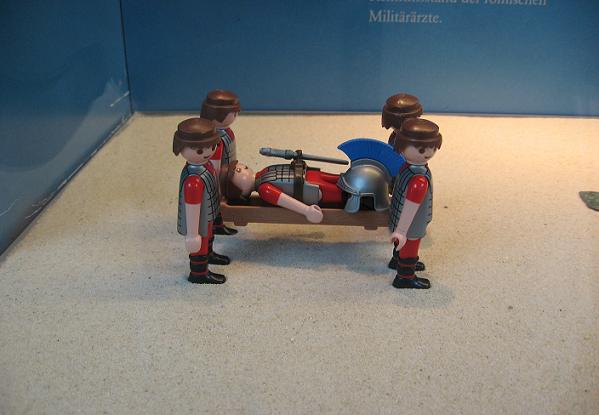 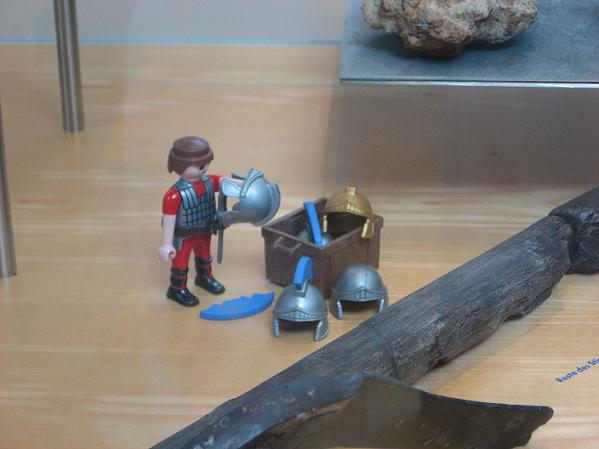 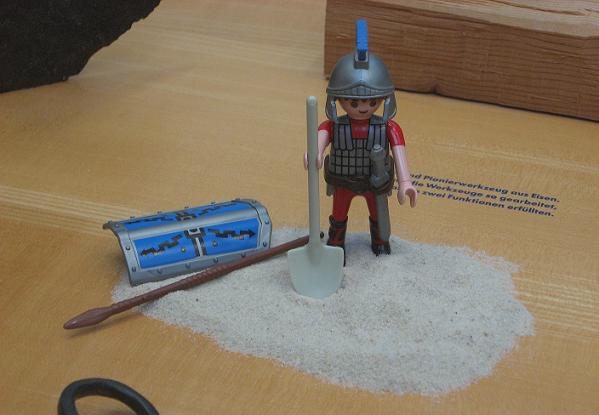 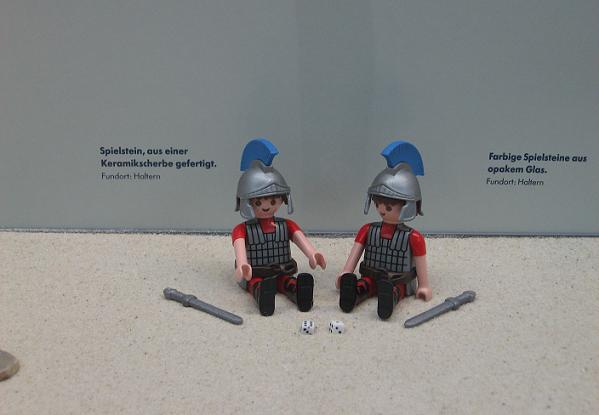 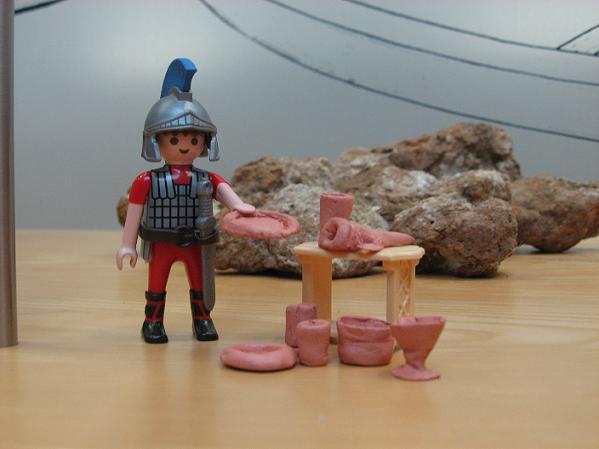 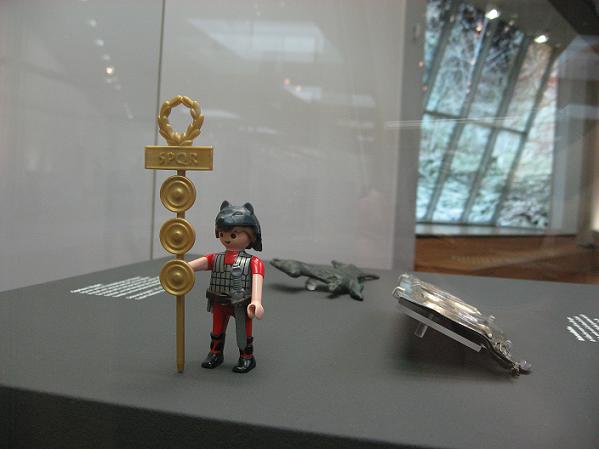 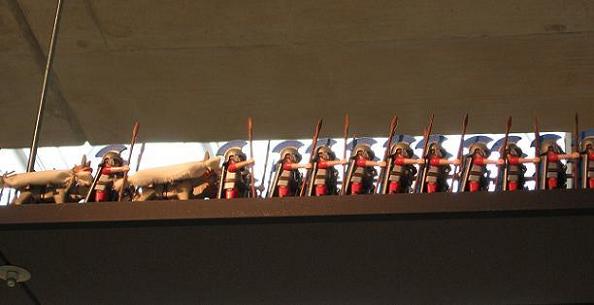 I was tempted to buy a Playmobil soldier in the museum shop, but managed to resist.  ¶ December 20, 2009

I was tempted to buy a Playmobil soldier in the museum shop, but managed to resist.

Good, how could one buy only one?

Good pictures! That exhibit looks like a good way to explain much of what happned.

That is an amazing exhibition! I don't know how you managed to leave it without buying half a legion including train, dice and helmet polishers!

Damn, at 36 am I too old to put Playmobile on my Christmas list? This is great.

Lol, Jeri and Hank are right, I would have liked to get more than one, and then I'd have to get a mule, too and a few cavalry .... I so don't have the space to put a Playmobil cohort.

Brian, why not? There's no age limit to having fun. :)

This is just astonishing, Gabriele. A great post. We visited the new Great North Museum in Newcastle, with its model of Hadrian's Wall back in the summer - and went on to Arbeia, the Roman fort at South Shields - amazing reconstruced buildings there.

Sorry, I have been trying to rectify the broken link ... unsuccessfully!

Constance, I've been to Arbeia, but didn't manage to get the museum into my schedule. But I've been to the Hadrian's Wall in 2007.

Very cool. Almost makes me want to recreate a roman battle, just for the Playmobil Romans.
Hope you have a wonderful Christmas.

Now there's an idea, Ann. Hm, where to get some playmobil Germans, lol.

Merry Christmas to you.

I bet someone had great fun putting that exhibition together - almost as much fun as you had with the captions!
I don't know if you got my e-mail, but if not, have a great Christmas and wonderful New Year!

That is awesome. Really kills the stodgy museum reputation. Kudos to whoever thought it up. So much easier than making your own out of discarded GI Joes and polymer clay . . .

Hi Jules aka Lady D. ;) Merry Christmas to you as well.

Contance, I thought you'd build a trebuchet and a siege tower first, and then man it with cla - or playmobil - soldiers. :)

What a great idea, and full marks to whoever on the museum staff thought it up! Maybe they could commission you to write captions....

Thanks, Carla. Yes, I had some fun with those captions. :)