4 Feb 2010
Guarding the Sound of Mull - Duart Castle
Duart Castle, the ancient MacLean stronghold on Mull, is situated where the Sound of Mull meets with the Firth of Lorn and Loch Linnhe. It sits atop a crag, in view of Dunstaffnage and Dunollie castles, and is part of a chain of eight castles that protected Mull and the mainland. Today, you can reach it by ferry from Oban and a short bus trip.

Back in 1367, you'd have needed to be on the right side of Lachlan Lubanach 5th chief of clan MacLean to get passage on one of his war galleys. Lachlan married Mary Macdonald, the daughter of the Lord of the Isles who gave her Duart as dowry. It was a love match, it is said, and old Macdonald not too happy about it. Relations between the two clans remained uneasy in the future. 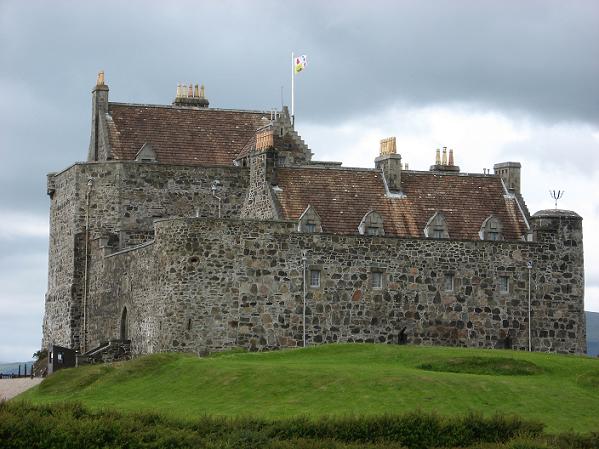 At that time, Duart Castle was a rectangular wall enclosing a courtyard (which, I suppose, held some timber buildings), and it was Lachlan Lubanach who built the stone keep outside the curtain wall but connected with it. It's an unusual structure to have the keep outside the wall, but it is protected by its situation on the crag and the peninsular structure of the site. On the landward side, the curtain wall was 9 metres high, and the castle was additionally protected by a deep ditch cut into the solid rock.

In the 17th century, vaulted cellars (some of them serving as dungeons) and a kitchen were built inside the walls, with a hall on first floor level and a chamber above it. A two storey gatehouse was added to defend the entrance into the courtyard. 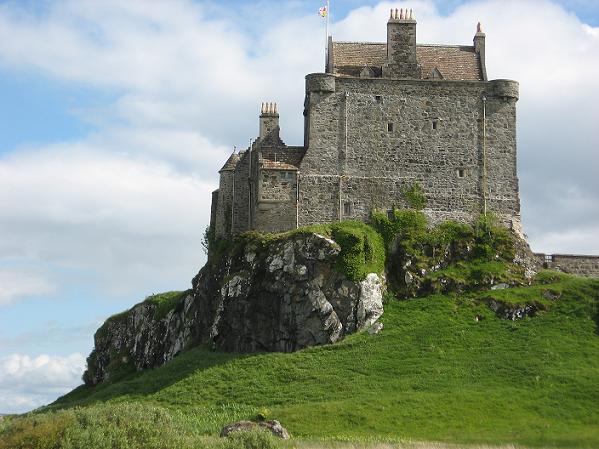 The keep atop the cliff
Being a Scottish clan, the MacLeans were involved in a lot of feuds and shifting alliances with other clans and the kings. The guidebook has some stories, like the one of Lachlan Cattanach (the Shaggy) MacLean and 11th chief, who abandoned his wife Catherine Campbell on a rock that would be flooded at high tide. She was rescued by a fisherman and sought shelter with her brother who in turn had Lachlan 'dirked in bed' (1523).

The MacLean chose the 'wrong' side during the first Jacobite rising, and in 1691 Sir John MacLean 4th Baronet of Morvern surrendered the castle to Archibald Campbell 1st Duke of Argyll who fought for William and Mary. Despite being in bad repair, the castle was used as garrison for Government troops until it was abandoned in 1751. 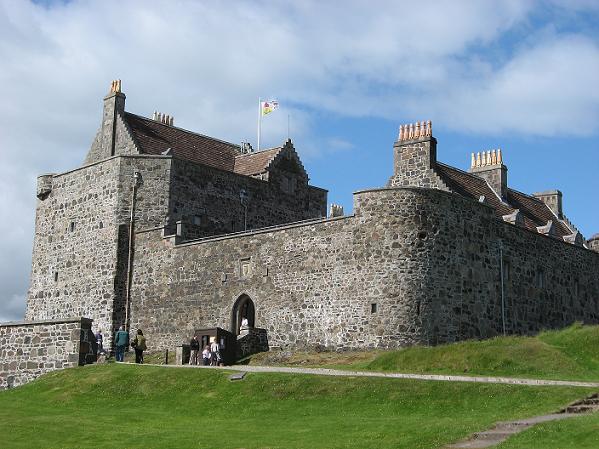 Duart Castle - seen from the land side
Duart Castle was sold a few times, slowly falling into ruins. But in 1910 Sir Fitzroy MacLean, 26th chief of the clan fulfilled a dream he had since a childhood visit to the hereditary lands and bought the castle. He took up the enormous and costly task to restore the building.

The restoration by the architect Sir John Burnett stayed close to the original features. Judging by a photo in the guidebook, the remains were substantial enough to serve as guideline. Further repairs were performed in 1991-95 under the present chief, Sir Lachlan Hector MacLean, 28th chief of the clan. Duart Castle is open to the public.

Comments:
Strikes me as a neat, tidy, and even livable castle.
That phrase "dirked in bed" is beautiful in its succinct dismissiveness!

Bernita, the Maclean chief does live there. He's sometimes present when a tourist group comes in, and a very kind and approachable gentleman.

There are several rooms on display (no photographing for insurance reasons, though) but the family has their private part as well. Much like in Inveraray, the Campbell seat.

Your second photo shows the keep on the cliff very well. Amazing castle. Was there an earlier structure on the site, do you happen to know? It sounds like a potential promontory fort location.

Can't help thinking that there must have been more, um, certain ways of getting rid of a wife than leaving it to tide and chance. I wonder if anyone's made that incident into a novel? - it seems ideal material.

I love the second pic, with the castle perched on the cliff. That's some wall!

It's great that the Maclean chief still lives there.

Carla, the guidebooks says there has most probably been a castle there dating prior to the existing 13th century walls. How far back fortifications on the site go, no one can say for sure.
Heh, Maclean probably wanted to make it look like an accident. He did report Catherine's death to her brother, complete with expressins of grief and all. Obviously missed the little detail about the fisher resucing her. ;)

Thank you, Kathryn (I still have to get used to that name, lol). I had a chance to speak to Sir Lachlan Maclean about the unfortunate incident with Catherine, and the Spanish frigate that ended up near the castle after the Armada was destroyed. That story will be part of another post.

Gabriele, I'm just discovering your blog, and this is the first (of what I intend to be many - it looks like a treasure trove) of posts I've read.

Beautiful photos - I love castles on the coast! My favorite English one (so far) is Scarborough Castle for just that reason.

I'm also glad that clan Maclean still own it, and share it with the public. It's something they have every right to be proud of.

Do you enjoy Scottish history and genealogy? I know I'll have to wade through plenty of Scottish nobles and clans, as they spread out in descent from Edward III's granddaughter Joan Beaufort, Queen of Scotland. For some reason, I've avoided jumping into researching them. But posts like this one make me realize what I'm missing out on!

Hello Brady, welcome to my blog and thank you for your kind words.

I'm interested in Socttish history, though I'm overall better informed about the timeframe from the Roman Empire and the Middle Ages up to the 13th century. The Romans are another main interest of mine as you will find out when you browse my blog, and there are a number of posts about the German Middle Ages as well.

Genealogy is only a part of the historical research for me (like numismatics is for my arachaeologial research), but I'd be glad to attract some genealogists who could help me sort out some messes. :)