20 Mar 2010
The Smallest House in Britain
Can be found in Conwy, Wales. It’s painted in a pretty red so you won’t miss it, tucked in there between one of the town wall towers and another, bigger house. 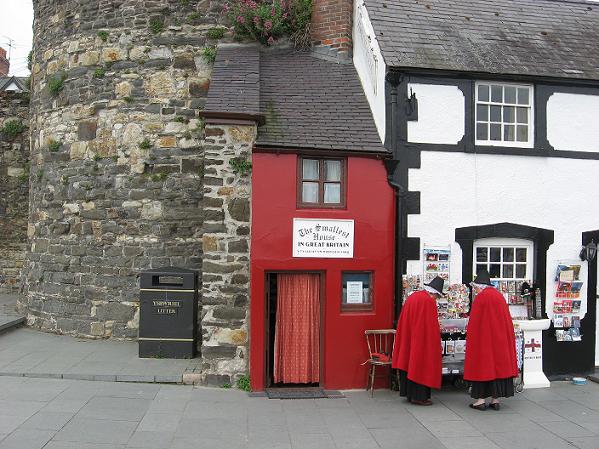 The ‘one up – one down’ house measures 3.05 by 1.8 metres (10 x 6 feet). The ground floor room was heated by a coal fire; the coal stored under a bench. The top room is reached by a ladder through a trap door and provides just enough space for a bed. There are no bathroom, toilet or kitchen, but that was not so uncommon in the 16th century when the house was built. 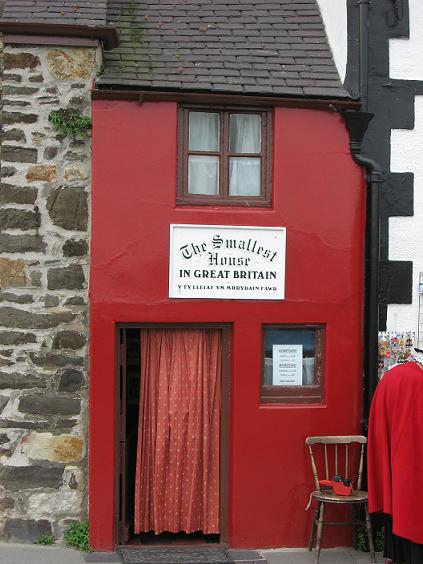 The house was inhabited until about 1900. The last man who lived there was a 6’3’’ foot tall fisherman, Robert Jones He could not even stand upright in the wee housie since it’s only about 10 feet high; counting both storeys. Eventually, the council declared the house unfilt for human habitation, and Robert had to move out. The building is still in possession of his descendants, two elderly ladies who run a little museum and shop - dressed up in some sort of 16th century skirts and cloaks.

The house has made it into the Guiness Book of Records as Great Britain’s smallest house, and is one of the tourist attractions of the quay, the harbour street in Conwy.   ¶ March 20, 2010

Comments:
How pretty, especially with the colour. It's almost hobbit-sized, except it isn't underground :-)

Sweeeeeet! Brilliantly, I managed to miss it when I was in Conwy last autumn. Leave it to me to do something like that. :)

Kathryn, I found it by pure chance. :)

I'm still trying to get my head around a 6' 3" man living in there!!! I bet he bumped his head alot!

Jules, or his back didn't like him after some time. ;)

Mon tres cher roi, it's a sweet litle place indeed, but no fitting abode for a king. It totally lacks forests and hunting grounds as well. ;)

Ouais, and we cannot do without our forests. ;)

I went there when I was a kid - wonderful castle and town, too.
And the two ladies in the photo are wearing traditional Welsh national costume.

Hi Eigon, welcome to my blog. You're the one blogging from that little Welsh town with the many used bookstores, right? :)

Those bright colours, it seems. I wonder if not red dye was pretty expensive in the Middle Ages and maybe evne later.