28 Jul 2010
The Kugelsburg - Part 1: The Rise of the Counts of Everstein
Like so many other German castles, the Kugelsburg near Volkmarsen was built on a hill in order to protect a road or crossing. In this case it was the ford across the Twiste river on the road from Fritzlar to Paderborn, both important towns in the 11-12th century.

The Kugelsburg changed hands several times, and there are traces of Romansque and Gothic styles mixed together. 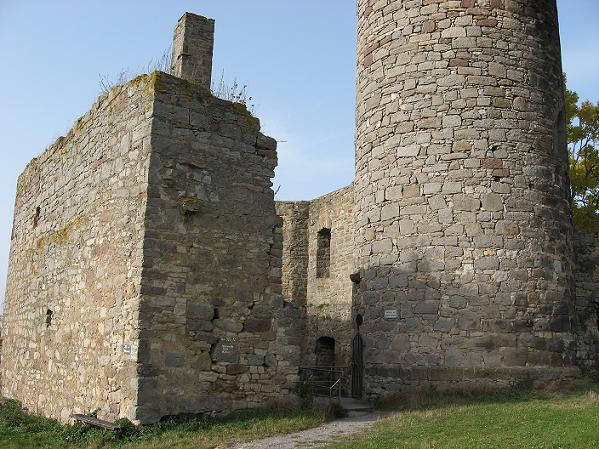 Kugelsburg, hall with the round keep

The land was held by the family of Everstein as fief from Corvey Monastery. The main seat of the Counts of Everstein (first documented appearance in 1122) was Castle Everstein at the Weser, but few remains of that are left, so the Kugelsburg makes for much better illustrations. They obtained the lands around Volkmarsen by marriage: in 1120 Konrad of Everstein married Mechthild of Itter, daughter of a noble Saxon family that existed since the time of Charlemagne. It was the first step to a nice little realm of allodial and feudal possessions at the Weser and in northern Hessia. 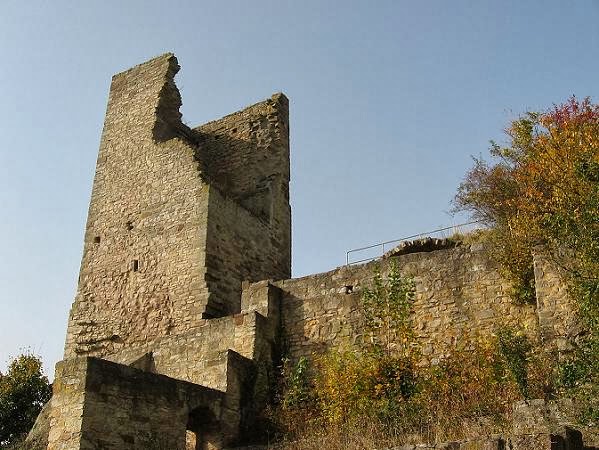 Kugelsburg, the square keep
The male line of the Itter family had died out in 1123, and the heiresses of Folkmar of Itter gave their allodial land to Corvey - a good way to get protection with no men around. As feudal overlord now Corvey was bound to assisst them.

Corvey at that time enjoyed imperial immediacy (Reichsfreiheit; it was under the direct authority of the emperor) and was a very powerful Benedictine monastery with possessions in several parts of northern Germany. This worked well under the north-centered Salian House, but when the Staufen family became kings and emperors and moved the centre to southern Germany, Corvey lost some of the royal protection. As a result, the monastery gathered even more land and got into conflict with, among others, the dukes of Braunschweig and the archbishops of Cologne. Therefore the abbots of Corvey had their vassals build castles at the borders of the lands Corvey owned, among them the Kugelsburg. 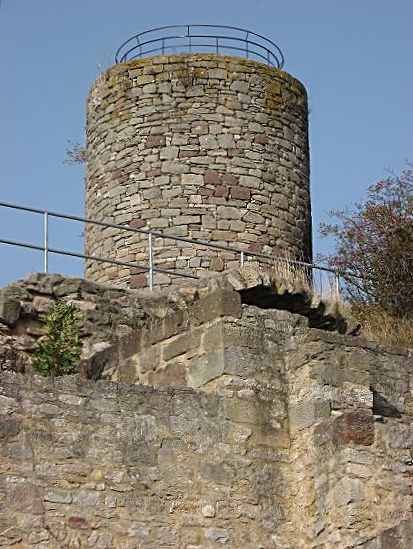 The rise of the family began when Albert II of Everstein supported Friedrich Barbarossa in his war with Heinrich the Lion. His feudal links to Corvey, Cologne and Mainz (for various possessions the family had gathered) put him on the Emperor's side except for the conflicting position as Vogt (reeve) of Helmarshausen which belonged to Heinrich, though there was another, perhaps more important reason:

In 1167, Albert II of Everstein had maried Richeza (Riquilda) of Poland, the daughter of Wladislav II 'the Exiled' Duke of Poland and Silesia and Agnes of Austria. Richeza was a cousin of the Emperor Friedrich Barbarossa and by her marriages Queen of León and Castile, Countess of Provence and Countess of Everstein. I'll try to sort out that mess.

Agnes of Babenberg-Waiblingen had first been married to Friedrich I Duke of Swabia (1050 - 1105), with whom she had two sons: Konrad who would become the first Staufen king as Konrad III, and Friedrich II of Swabia. Friedrich II married Judith, daughter of Heinrich 'the Black' of the House Welfen and Wulfhild of Saxony. Their son would be known as Friedrich Barbarossa (1122 - 1190).

After Friedrich's death, Agnes married Leopold of Austria (in 1106) with whom she had several children, among them Agnes of Austria, the mother of Richeza (1135? - 1185). 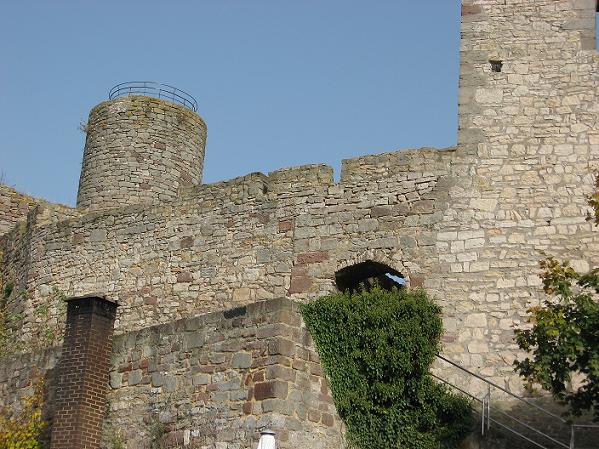 Kugelsburg, inner curtain wall with the round keep in the background
Let's add some more geneaolgy fun: Before she was married to Albert of Everstein, Richeza had first been married to Alfonso VII of Castile (from 1152 - 1157) with whom she had a daughter, Sancha (later married to Alfonso II of Aragon; their daughter Constance would 1209 become the wife of Friedrich I of Sicily, rival for the position of Holy Roman Emperor to Henrich the Lion's son Otto IV).

Alfonso of Castile had priorly been married to Berenguela of Barcelona and was father of, among others, another Sancha who married Sancho VI 'the Wise' of Navarre. They were the parents of Berengaria, the future wife of Richard Lionheart of England (1157 - 1199)

Alfonso's sons from his first marriage didn't get along with Richeza who fled to Aragon where she met her second husband (1161 - 1166), Raymond Berenguer II Count of Provence. Their daughter and sole heir Douce of Provence was ousted by the husband of her half-sister Sancha, Alfonso II of Aragon. The whole Spanish / southern French lot was more than a bit dysfunctional.

Let's hope Richeza found some peace in her third marriage to Albert II of Everstein. 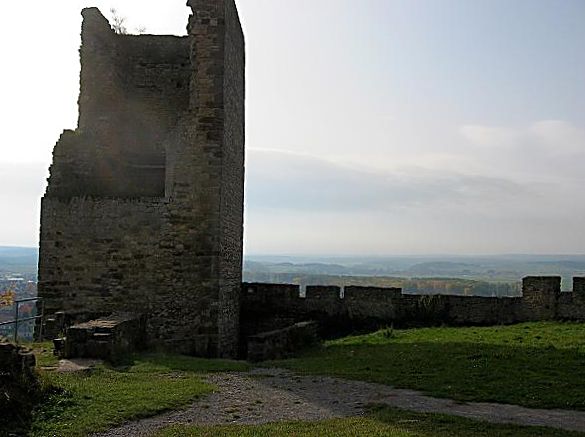 The square keep against the evening sun
Their son Albert III Count Everstein was married to Agnes of Wittelsbach, and those two had 12 surviving children. One daughter was married to Gottschalk Lord of Plesse, another to Burchard IV of Scharzfels - both linking back to two other castles I have visited. *grin* One of their sons, Otto II (1219 - 1282), would become imperial reeve (Reichsvogt) of Göttingen.

Albert III (1170-1217) is said to have built Kugelsburg Castle, but the statements on the websites are somewhat contradictory; it could well have been Albert II who built the first castle.

Another mess is the presentation of the feudal relationships. One site says the town of Volkmarsen had been a fief held from the Archbishop of Mainz, but another says the Itter heiresses gave their lands to Corvey, and Konrad of Everstein held them as fief from Corvey. If it's correct that pope Hadrian IV confirmed Corvey's rights to Volkmarsen in 1155, the second version is more plausible. Maybe there was some quarrels between Mainz and Corvey about who owned the land. 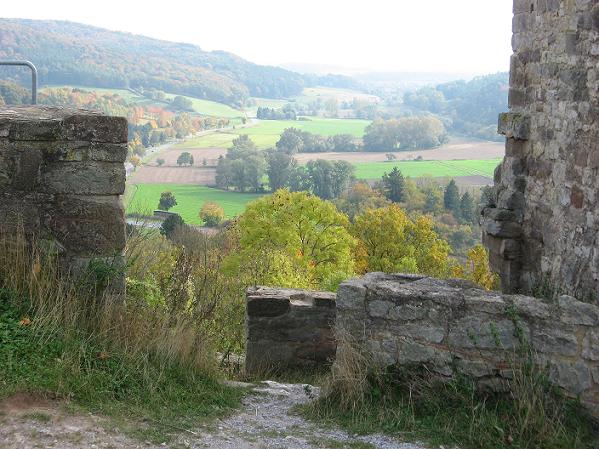 View from the bailey into the vale
After the fall of Heinrich the Lion in 1184, Albert III became vassal of Philipp of Heinsberg, Archbishop of Cologne and Duke of Westphalia (1130-1191; he won big time in that war). Philipp used to buy the castles of his vassals and returned them as fiefs. That way Philipp remained vassal of the emperor and his vassals still held their fiefs as imperial ones, but there was a stronger personal connection between the archbishop and his vassals nevertheless. Now, this is something that could not have happened for the lands around Volkmarsen which the Eversteins already held as fief and could not sell. It can only mean their allodial possessions of Everstein Castle and the lands around that one. If Albert held Everstein from Cologne and Volkmarsen and the Kugelsburg from Corvey, it could have led to some problems. 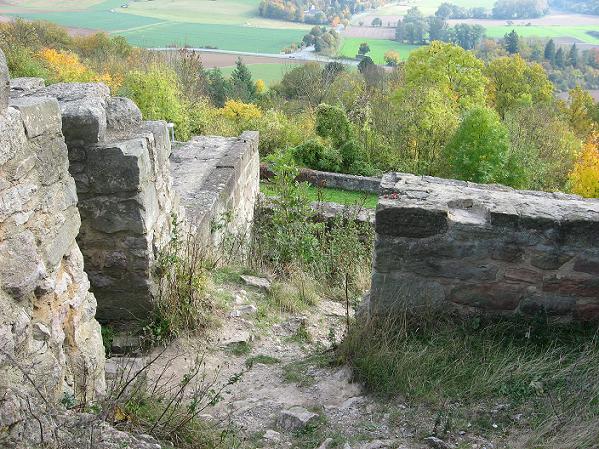 View from the bailey to the remains of the outer curtain wall
In 1233, another pope - Gregor IX - confirmed Corvey's rights to the Kugelsburg and the town of Volkmarsen. Again. Why did he need to do that, was there another a discussion about feudal rights and Mainz' claim to Volkmarsen?

Well, whatever lay behind all that, the Counts of Everstein lived in the Kugelsburg from 1239-1293, obviously quarreling with the town of Volkmarsen a few times. In 1255, Konrad II of Everstein had to pawn out part of the Kugelsburg to the monastery of Gehrden - looks like a few lawyers got rich on those feudal quarrels. The decline of the family continued when they could not defend their ancient seat of Everstein against the Welfen who conquered the castle in 1284.

Comments:
The whole Spanish / southern French lot was more than a bit dysfunctional.

Oh how true that is. Meanwhile, awesome pictures as ever, and good luck keeping those genealogies straight...

Fantastic pics, and I love all the medieval genealogy! (You probably noticed...;) I'd never heard of Richeza before; what an interesting lady.

Thank you, Jonathan. It was the first time I took a closer look at the Spanish/southern French families and from a few hours of googling got the impression that all those intermarriages didn't keep them from getting at each others' throats. :)

Kathryn, I hadn't heard about her before, either. The remark that Albert of Everstein was married to a niece of Barbarossa caught my interest, and then I spent several hours chasing her and her relations down. I got a bit caught up in that, it's addictive. :)

I have always been surprised at the place of the Church in the feudal system of Medieval Germany. They, like owned towns, displaced counts, and in general were secular powers in their own right.
Oh sure, the bishops in England had power,lots of it!, but (say) the Bishop of Bath and Wells didn't hold the city of bath in feoff.
The only analogy I can think of in England would be the power of the Colleges in Oxford.

Stag, the church had a lot of power and was bound to mess things up. the archbishops of Mainz and Cologne both became electorates, that is two of the seven princes of the realm who would elect the king, a right that became more important after the fall of the Staufen dynasty.