23 Aug 2010
Xanten Impressions
The history of Xanten, a town at the lower Rhine in Germany, goes back to the Romans who built a legionary fort - Castra Vetera - on a nearby hill overlooking the river in 12 BC. The fort soon attracted a cannabae legionis, a civilian settlement (they're called vicus when attached to auxiliary forts). The civilian settlement continued to thrive and the emperor Marcus Ulpius Traianus granted it the rights of a Roman town about 100 AD. The place was then called Colonia Ulpia Traiana (CUT) and became one of the most important settlements in Germania Inferior; the province left of the Rhine that included Luxembourg, parts of modern Belgium, the Netherlands, and the German county North Rhine-Westphalia. 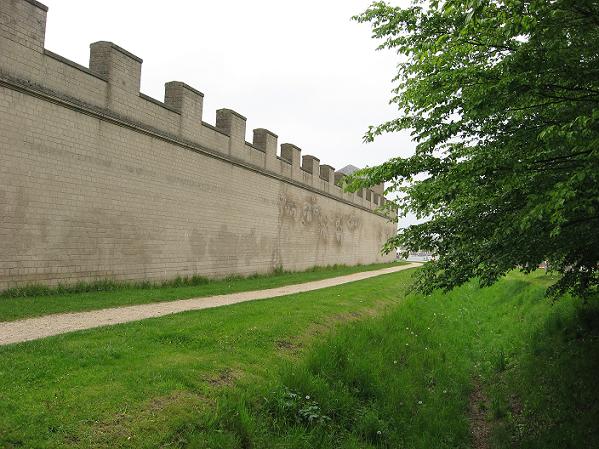 The CUT encompassed 73 hectares and had 10,000 inhabitants, but it was almost completely destroyed by an attack of the Franks in 275. The garrison of Vetera II and the remains of the population rebuilt the town in smaller scale (400 x 400 metres) which was better fortified and easier to defend. The new place was called Tricensimae. But the Frankish raids increased; the settlement was destroyed in 352 and rebuilt again, but in the end the place was abandoned in the 5th century. The youngest coin found in the area dates to 426 AD.

Luckily for archaeologists, the Mediaeval town started around a centre on the ancient grave field near CUT, thus leaving the remains of the Roman settlement free of buildings. 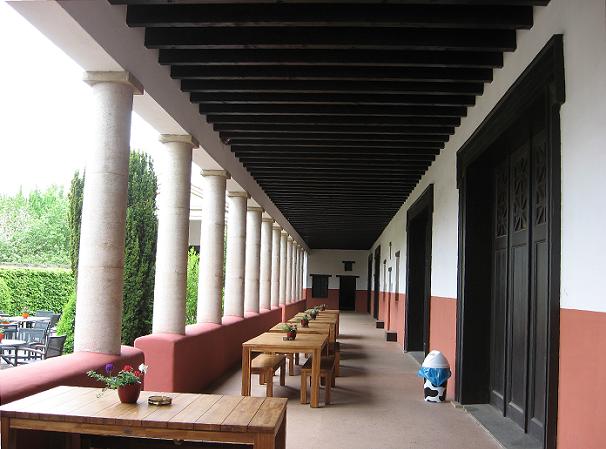 Reconstructed inn in the Archaeological Park
In 1977, an Archaeological Park was opened on the site of the Roman town. Some Roman buildings have been reconstructed; the most elaborate one is the inn, complete with baths and sleeping rooms. It houses a restaurant which offers Roman food. Other sites have been partly reconstructed, like the Harbour Temple and the amphitheatre. New features are added all the time - right now the artisan quarter is being built, using old techniques and materials as far as possible (albeit with a modern scaffolding; I suppose it's safer) There are digs going on as well.

The latest addition, open to the public since 2009, is the museum that has been erected on the foundations of the basilica attached to the baths. The remains of the baths itself have been roofed in to protect them from the weather. The modern metal and glass buildings show the size of the original structures which are pretty impressive. 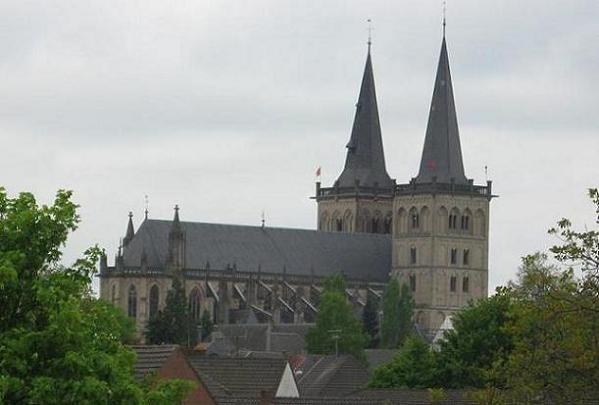 St.Victor Cathedral, seen from the amphitheatre in the APX
The modern name Xanten comes from ad Sanctos (by the Saints), a name given to the 8th century settlement that developed around a Carolingian chapter church. It was assumed the church had been erected over the grave of St.Victor and other members of the Theban Legion; Roman Christians who may have been executed in Xanten in the 3rd century because they refused to sacrifice to the Roman gods. Helena, the mother of Constantine the Great, is said to have collected the bones from the swamp into which they had been thrown, and buried them in the Roman grave field. But the archaeological traces of Victor's remains are murky, and the site of the church is not his burial place.

The church was destroyed during the Viking incursion in 863, and replaced by a Romanesque church that was expanded in the 12th century. Its westwork with the two towers remains until today. 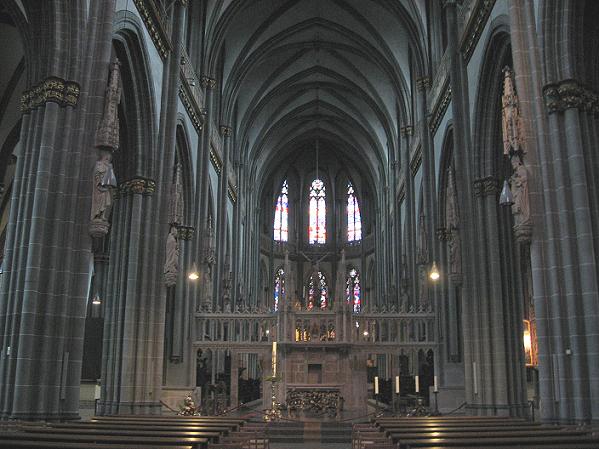 St.Victor Cathedral, interior
The Gothic cathedral we can see today was commissioned by the archdeacon Friedrich von Hochstaden, a brother of the archbishop of Cologne, in 1263. The eastern part of the five nave basilica was finished in 1437, the western part that connected with the Romaesque west choir in 1519. The cathedral was completed when the Holy Ghost Chapel was consecrated in 1544. It became the centre of an archdeaconry that managed to retain a certain degree of independence towards the archdiocese of Cologne.

The chapter remained independent from the town as well. The ring of buildings belonging to the chapter was enclosed by a wall, and enjoyed immunity, which means that the jurisdiction lay in the hands of the provost as head of the chapter, not the town major. Part of those Immunity Walls can still be seen today. 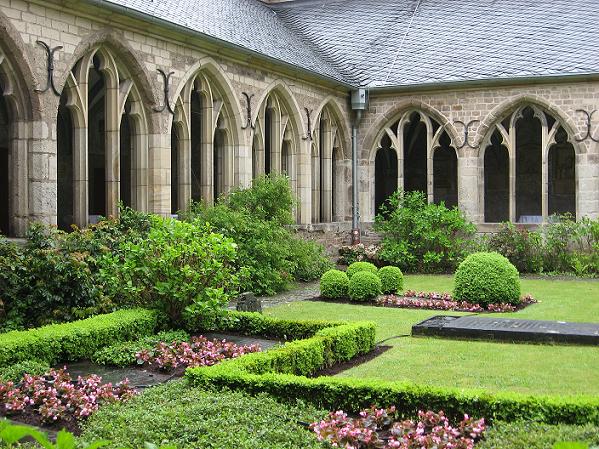 St.Victor Cathedral, cloister
The cathedral was badly damaged by bombs during WW2. Fortunately, the rich furnishings, the altars, and the beautiful windows had already been brought to a safe place. The cathedral was restored immediately after the war, and great care was taken to stay true to the original. That work was completed in 1966.

Xanten had been granted the rights of a town in 1228, but only in 1389 the town itself was fortified with walls, a result of an ongoing feud with the neighbouring Counts of Kleve. Of the four gates and eighteen towers only few remain today, among them the Kleve Gate and the Kriemhild Mill. 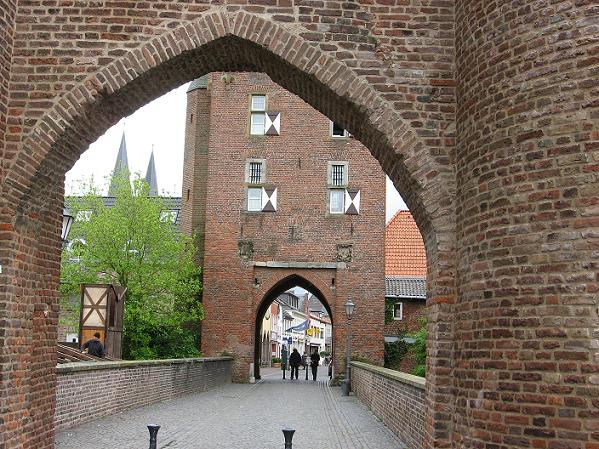 Kleve Gate, view to the inner gate
The Kleve Gate, dating from 1393, is a double gate connected by a bridge over the ditch that surrounded the town. The inner gate consists of a quadratic tower, the outer gate of two round towers, the so-called Owl Towers, and an arch. The inner tower has seen several different uses, among others as prison. When most of the town walls were dismantled in the 19th century, the town council voted against destructing the Kleve Gate; instead it was renovated in 1843.

The lower part still shows the original Medieaval structure, but the upper part had been destroyed in WW2 and was restored. Today the inner gate houses self catering appartments. 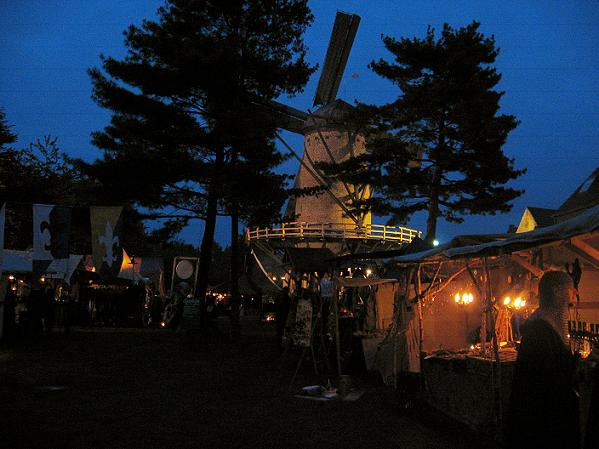 Kriemhild Mill by night
In the 17th and 18th centuries several of the eighteen towers of the town fortifications served as living quarters for town employees. The one now called Kriemhild Mill (1) was the Night Watchman Tower. The towers, often in bad repair, were sold in late 18th century, and most of them broken down by their new owners. Our tower had better luck since the merchant who bought it in 1778, repaired it and turned it into a summer house. In 1804, he changed the tower into a wind powered oil mill by adding stocks and sweeps (and the whole interior mechanism). Somewhat later it became a grist mill which was bought by the town. The mill is in use again since 1992, and can be visited.

Xanten has some pretty, old houses as well, but those will be for another post. 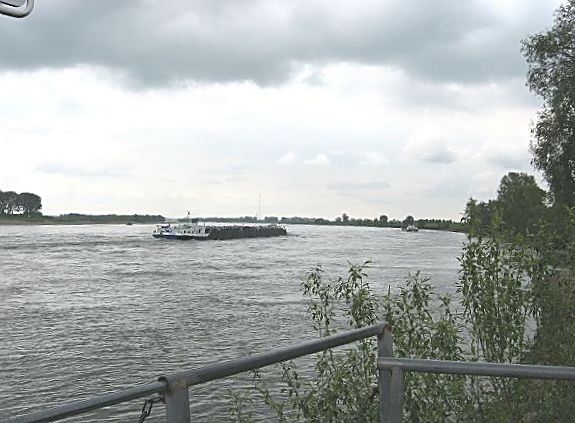 The Rhine near Xanten
A branch of the Rhine once ran close to CUT, but the river has changed its course a few times, flooding the fort Vetera II, for example. The harbour of Mediaeval Xanten was cut off in the 16th century, one of the reasons for the decline of the town. I rented a bicycle to better get around and took a tour to the Rhine, among other places.


(1) The name Kriemhild comes from the German epic Song of the Nibelungs. In the Edda poems she's known as Gudrun, wife of Sigurd (Siegfried in the German version) who is murdered by her brothers. The German Siegfried is called 'of Xanten' and that's the reason you'll find a lot of Siegfried and Nibelung references in the town.  ¶ August 23, 2010

Comments:
such a pretty place - especially that cathedral!!

Yes, the cathedral's glorious isn't it? Possibly also worth mentioning the Annales Xantenses, which are one of the most detailed sources for the Viking raids on the Carolingian Empire--though, for obvious reasons, not much beyond 863...

Jonathan, the cathedral is great. And since it has been restored so early the rebuilt parts already have aged a bit which looks better. (Though too aged is not so nice, either; some of the churches in the Rhineland are in dire need of sandblasting).
I'll get those Annales in when I post a more detailed version about the history of the cathedral. Can't cover everything in one post. Even if I stopped traveling now - which I hope won't happen any time soon - I'd have enough material to last me a few more years. :)

I've been meaning to visit Xanten for ages, and still haven't! :-( Really must do, one of these days...Great pics, Gabriele!

You really should go there, Kathryn. But plan an entire day for the Archaeological Park. :)

I would love to visit the Archaeological Park! It looks and sounds fantastic. A lot of effort has been put into the reconstruction of the buildings.

Sorry to be a stranger Gabriele - I tend to lurk rather than post. I know so little about your era of interest, but find the posts fascinating - I'm learning:>

Anerje, it's the same for me when it comes to a certain handsome Gascon and his royal boyfriend. ;) Though I'm getting better informed thanks to some blogs.

I just came across your blog thanks to the recent Carnivalesque and want to mention how very impressed I am. I'm going to enjoy working my way through it.

Thank you for your kind words, Curt, and welcome to my blog.