14 Jun 2014
Pretty Things That go Boom
Yesterday, I promised Brian McClellan* on Twitter that I would post some photos of historical guns and rifles I took in the museum in Coburg Fortress. So here we go.

*BTW, go check out his Flintlock Fantasy novels, they're a lot of fun. A revolution, guns, magic, a divine chef, and things blowing up. 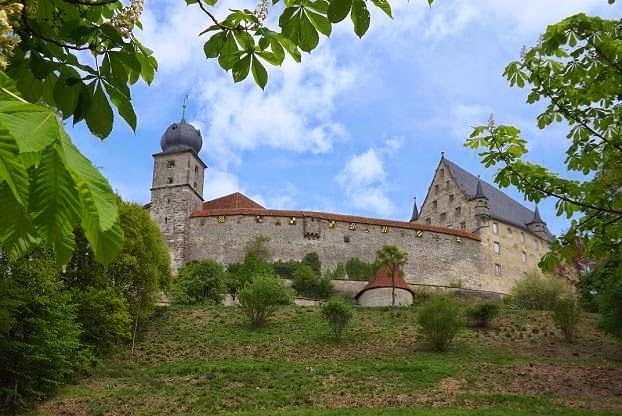 Coburg Fortress; the Blue Tower to the left and the High House to the right

The history of Coburg Fortress (Veste Coburg) goes back to the 11th century, but I'll leave that for another post. It is one of the castles that has never fallen into ruins, but was altered significantly over time. Albeit some old features still remain, like the Romanesque lower part of the Blue Tower or the Gothic High House, the most striking parts today are the fortifications from the 16th century.

The name Coburg likely will ring a bell for those interested in history. The town and fortress are today in Bavaria, bordering Thuringia, but once the land belonged to the Dukes of Saxe-Coburg-Saalfeld and Saxe-Coburg-Gotha. Want some geneaology again? I'll try to make it easy, I promise. 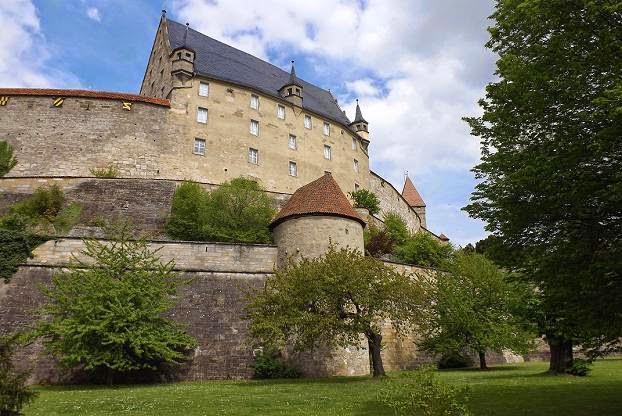 Marie Louise's brother, also named Ernest (1784-1844), would become the first duke of Saxe-Coburg-Gotha in 1826 due to some altered distributions of the landed heritage. He is the father of Prince Albert (1819-1861), later Consort of Queen Victoria. Albert's mother was Princess Louise of Saxe-Gotha-Altenburg whom Ernest divorced in 1826. 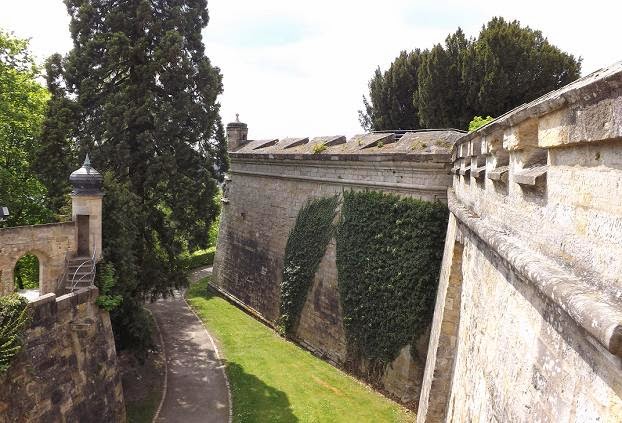 Outer defenses of the castle
Ernest's older son, another Ernest (1818-1893) who became second Duke of Saxe-Coburg-Gotha, would add significantly to the collection of arts and weapons in Coburg Fortress which his grandfather Francis had started in Saalfeld ansd which Ernest transfered to Couburg.

The family lived in Ehrenburg Palace in the town, though the last Duke, Carl Eduard (1884-1954) lived in the fortress which had been sold to the county of Bavaria in 1920. 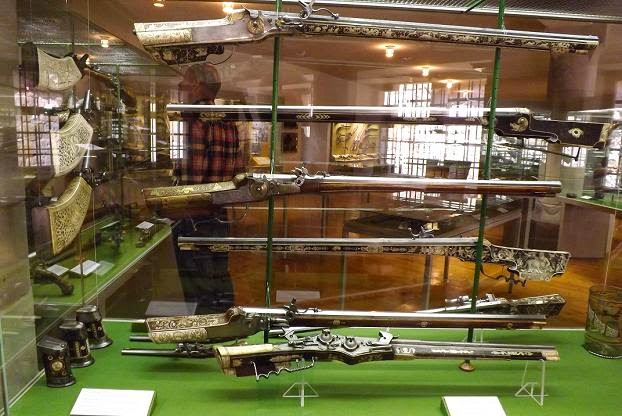 One of the vitrines with guns
The collections displayed in several rooms in the castle include copper engravings, paintings, glassware and coins, as well as lots of weapons and amour, including historical guns, rifles, and pistols - that part encompasses about 10,000 pieces. I had a field day there, though of course, I took even more pics of the swords and the armour than of the guns. There are also some parade coaches and sleighs. 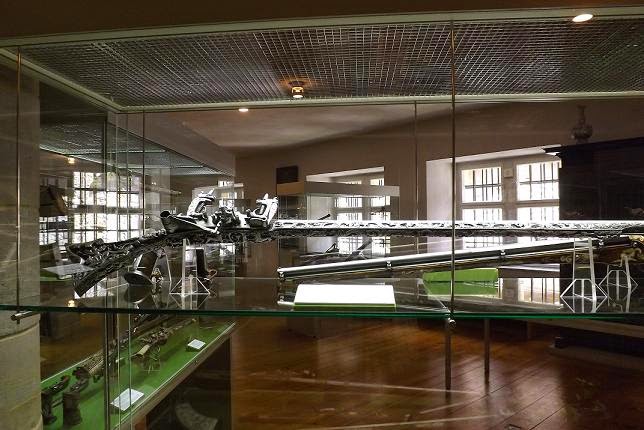 A flintlock gun
There is one hall full of vitrines with guns, rifles, pistols, and a few crossbows, mostly used for the hunt and sport shooting; some 300 pieces in all.

My father's friends from the sport shooting club would likely get lost in that room for hours. Well, the museum is couple friendly; you can leave the spouses to look at the glassware instead. ;-) Though personally I still prefer the guns. 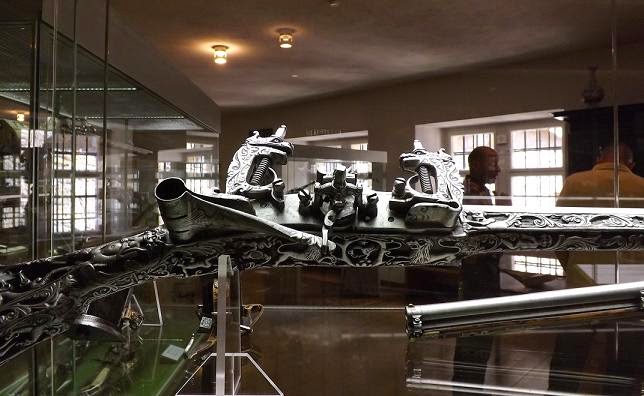 Closeup of the trigger meachnism
Since it's not one of my special areas, I concentrated on the prettily decorated - and mostly older - pieces. If someone wants high resolution versions of some of the photos to better see the ivory inlays and other decorations, feel free to contact me. 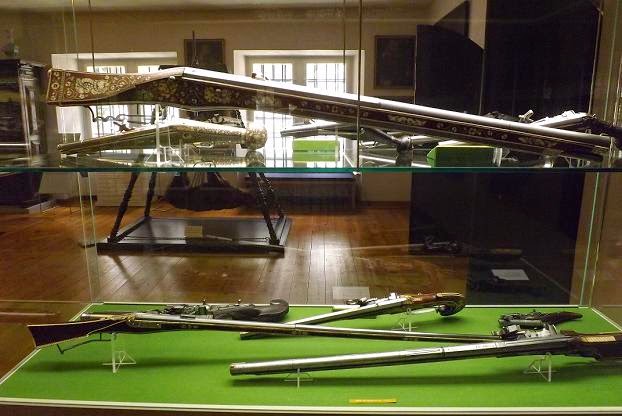 Another vitrine with guns and pistols
This one looks like an early version of a flintlock. There's a video showing how the mechanism works, and the difference between various ways of firing a gun. I'm not a specialist on the variants of wheel locks and flint locks and their dates, but some of the older mechanisms look intriguing. Though I wonder how often those things blew off in the wrong direction. 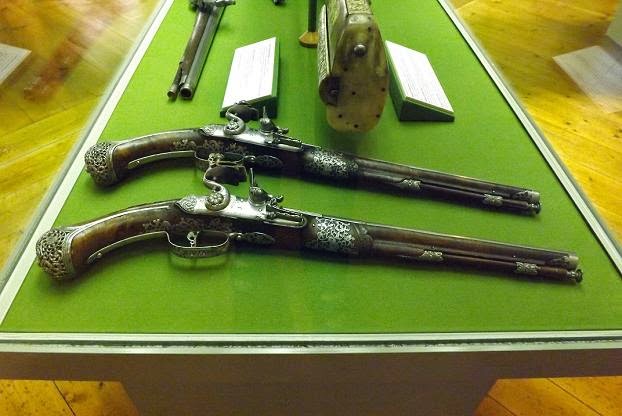 Duelling pistols
Taniel gifts duelling pistols to his father in McClellan's Promise of Blood. Maybe they looked a bit like the ones above. 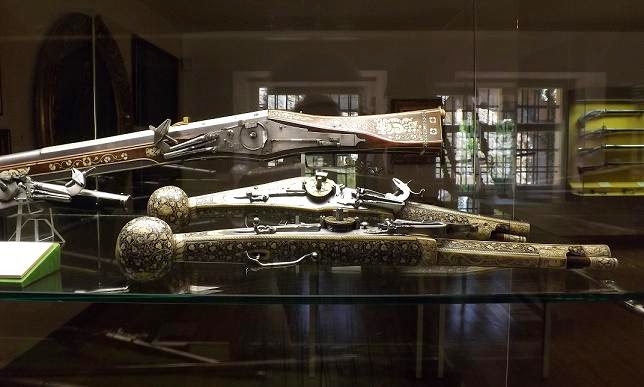 Wheel lock pistols
The collection is one of the most important ones in Europe. The weapons date from the late 16th century until present time and geographically reach from Russia to Spain and Sweden. Some famous gunsmiths are Zacharias Herold in Dresden (~ 1580), Lazarino Cominazzo, Brescia (~ 1680), Bertrand Piraube, Paris (~1700) and Ivan Permjakov, St.Petersburg (late 18th century). 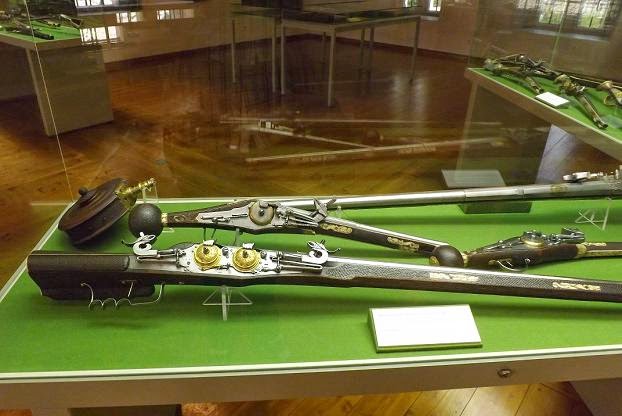 Matching gun and pistol
The weapons and armour were mostly collected by Duke Ernest II of Saxe-Coburg-Gotha. He also obtained part of the contents of the arsenal of the town Coburg and moved Francis' collction of glass and copper engravings to Coburg. He had the rooms renovated, and the castle and its collections opened for the public in 1839, which was a suprisingly modern decision at the time. 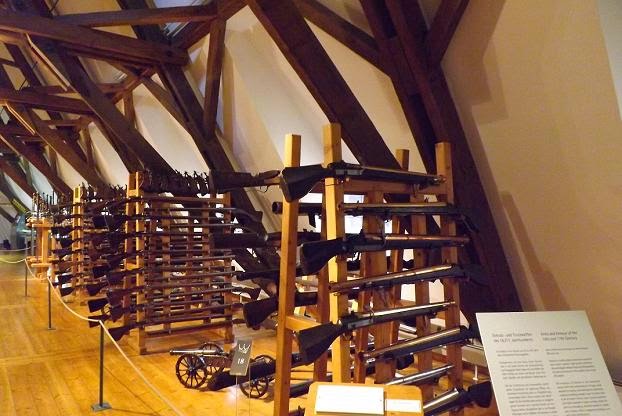 Racks with guns
There is another room with racks full of armour and guns from the 16th and 17th century, the Rüstkammer. Those were actually used to equip armies. They are much more utilitarian, and some of the armour sets, swords, halberds and guns show signs of use. Most of those come from the town arsenal. 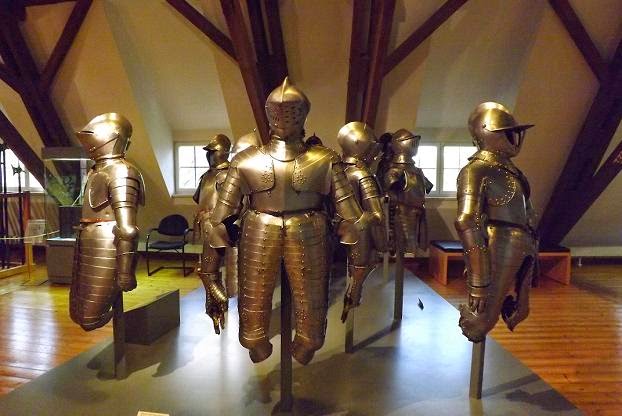 Bulletproof armour
One of the things I found interesting was a group of armour sets that were supposed to be bullet proof. The sign of quality was a bullet shot (or several) that would leave a dent but not go through. You can see one in the left armour and there's a smaller dent at the junction between the right (left on the photo) leg and the body part in the middle one.

That armour was heavy, though, 20-30 kg. It was mostly used by the cuirassiers, the heavy cavalry which obviously got its name for a reason, lol. 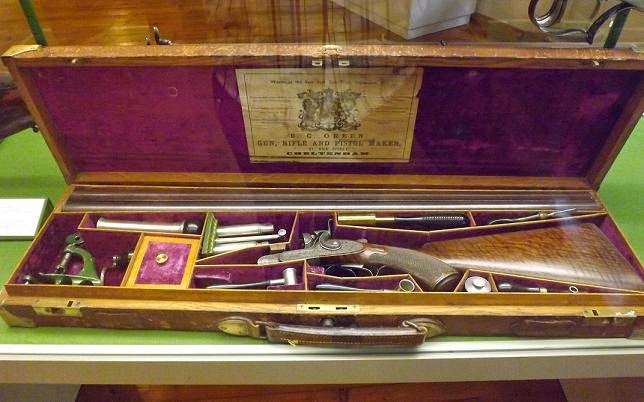 Boxed set
Other exhibits include the stuff that is part of using a gun or rifle, like powder kegs, rammers, fuses and magazine boxes. They're mostly distributed among the guns and pistols in the various vitrines. 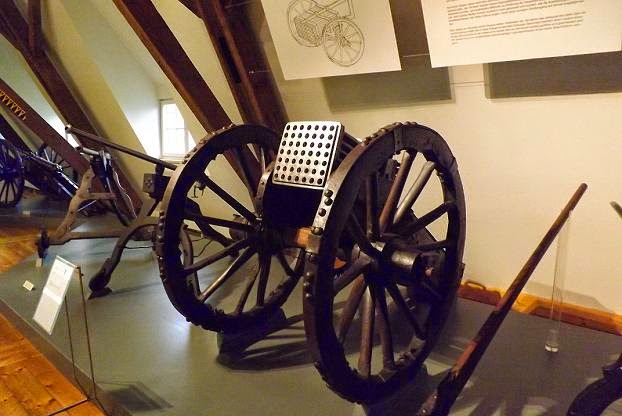 Organ mortar
There are also some cannons. I really liked this one, the predecessor of the magazine gun. It's called an 'organ', a sort of mortar that can shoot 49 bullets in salvas of 7 (one row). Nasty thing to have on a battlefield. 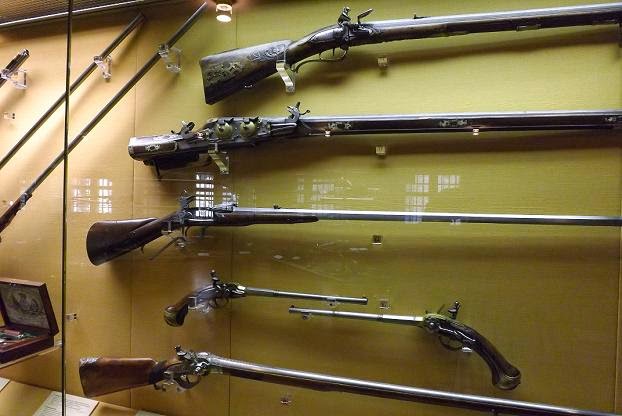 Some modern guns
Of course, there were several vitrines with more modern guns, pistols, and air guns as well, but I found those less interesting. Weapon fans may disagree, *grin* The above display shows some development of the trigger.
¶ June 14, 2014

Comments:
Excellent photos! Thank you so much for posting. This is another place I must add to my visiting list.
Best wishes,
Jason

Coburg Frotress looks really impressive, especially in your pictures :-) Great shots! And thank you for introducing me to Prince Albert's family history. I did not know much about his family background.

Great photos. The collection looks amazing. It's striking how ornate some of the posh guns are - reminds me of some of the decorated Viking battle axes etc. I suppose it's all a continuation of the same long tradition.