22 Apr 2015
Two Fairy Tale Castles - Trendelburg and Sababurg
I'll be away on the little trip to the Baltic Sea I mentioned in the post below until the beginning of May. But I'll leave you with some photos of fairy tale castles that have been connected to the stories collected and retold by the Grimm Brothers. The Grimm Brothers lived, studied and worked first in Kassel, later in Göttingen, and part of the oral traditon that was included in their fairy tale collection came from the area around these towns. So it is no surprise that some castles became connected with those tales. The local tourist management is grateful for that. *grin* 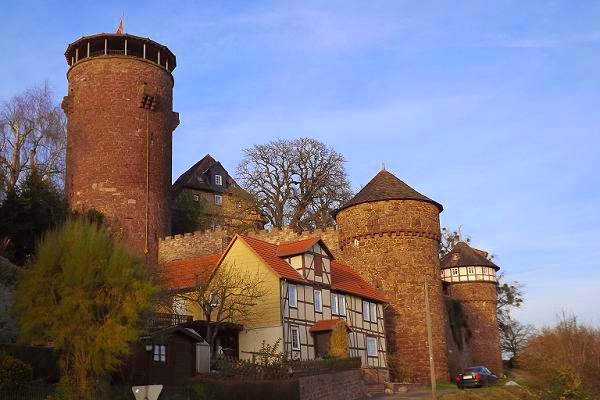 The Trendelburg, situated on a promontory in the Reinhardswald Forest in the western Weser uplands, is said to have been the home of Rapunzel or the Maiden in the Tower. The 38 metres high keep would indeed make a prison for a fair princess. Though today there is a door ar ground level so you don't have to climb a hairy ladder. :-) 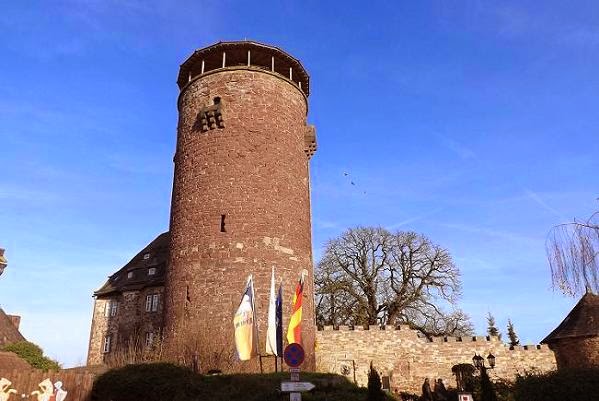 Castle Trendelburg, the keep, also known as Rapunzel -Tower
The Trendelburg dates back to the 13th century when it was in possession of the Counts of Schöneberg who lost it to the bishopric of Paderborn. Eventually, the castle fell to Heinrich I Landgrave of Hesse-Kassel. (Yes, there's a longer post hiding in that fun bit of history). Another landgrave turned the castle into a hunting lodge in the 1650ies. In the 19th century, the castle held the offices of the forestry administration, and in 1901 it was sold into private hands. Today it is accomodates a hotel and restaurant. And sometimes you can spy Rapunzel walking around. 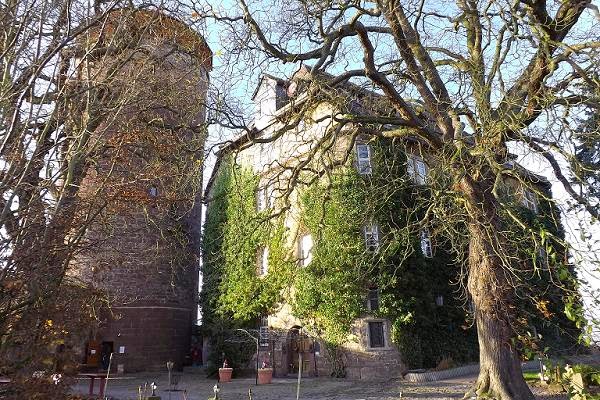 Rapunzel Tower and the great hall
The castle retains a number of its old features, like the keep and three other towers, the great hall, the main gate, and parts of the curtain wall. The battlements have been renovated, as well as parts of the towers and other buildings, first when the landgrave of Hessia used the place as hunting lodge, and again when the castle was turned into a hotel. A trench and a earthen wall as additional fortifications have mostly been flattened over time; in the Middle Ages, the main gate could only be reached by a drawbridge. 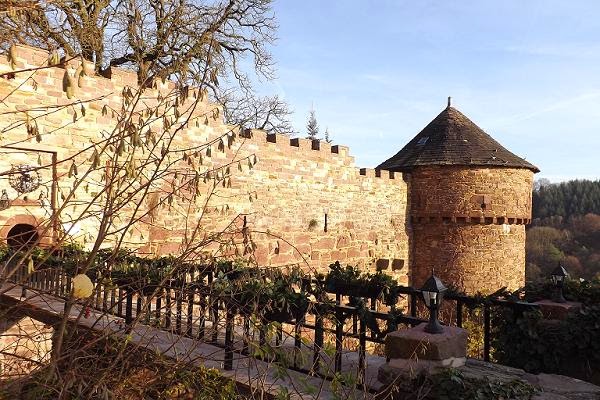 The bridge spanning the remains of the trench, and parts of the curtain wall
The Trendelburg still gives the impression of a Mediaeval castle, with its bulky towers and the formidable keep.

The Sababurg has been altered more, but even there you can find old parts. The Sababurg is the castle of the Sleeping Beauty (Dornröschen in German), and it too, is a hotel and restaurant today. Complete with a dressed-up prince whom I spotted when we had some smoked trout on the terrace on a sunny spring afternoon. 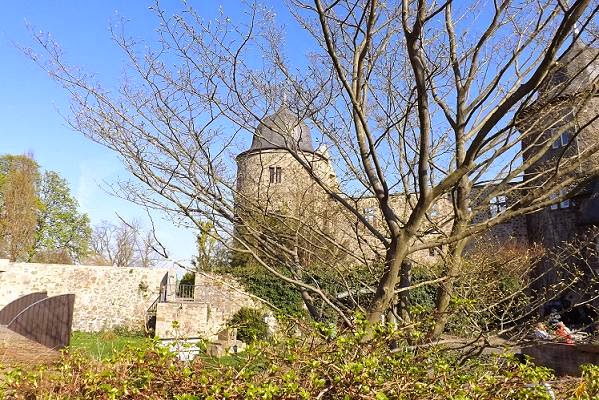 Sababurg, the castle of the Sleeping Beauty, in early spring
The Sababurg (its older name was Zappaborg) was built in 1334 to protect the pilgrimage church of nearby Gottsbühren, initiated by the bishop of Mainz. Now, the archbishop of Mainz was constantly at cahoots with the bishop of Paderborn and the landgraves of Hessia, so the castle, while not involved in any military actions as far as I know, became a focus of the quarreling parties nevertheless, changing possession a few times. As a result, it was abandoned and basically a ruin in 1455. 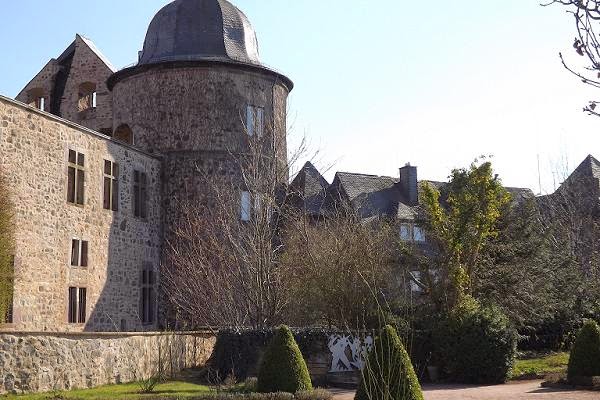 Sababurg, inner bailey with remains of the palas to the left
Those landgraves liked their castle style hunting lodges. Landgrave Wilhelm I of Hessia erected one on the remains of the Sababurg in 1490. The palas which today is a ruin was finished in 1519. The landgraves planted a thorny hedge to protect their animal park (there is still an animal park today, quite a tourist attraction on a sunny spring day). After the Thirty Years War the castle fell into ruins and was so overgrown with brambles that is was easy to imagine it having been the castle of the Sleeping Beauty. 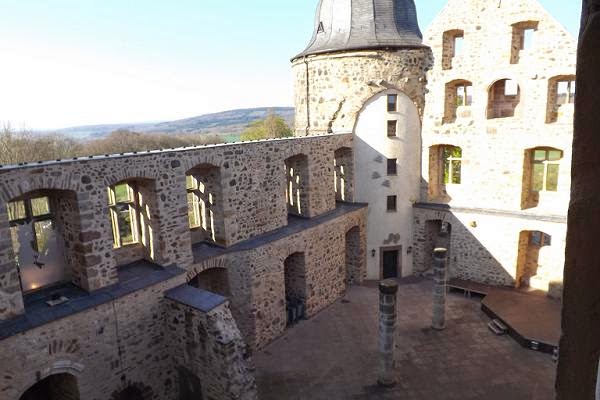 The remains of the palas seen from one of the towers
Another landgrave of Hessia, Karl, got rid of the brambles and repaired the castle. But it became less important over time, some of the buildings were taken down, and in the 19th century it was but the lodgings of the local forester. Today the county of Hessia is charged with the repairs and restorations. The curtain walls and the palace are ruins, but some other buildings, including two of the towers, have been turned into a hotel with restaurant. Rose bushes have been planted in some spots which shall cover part of the walls in the years to come. 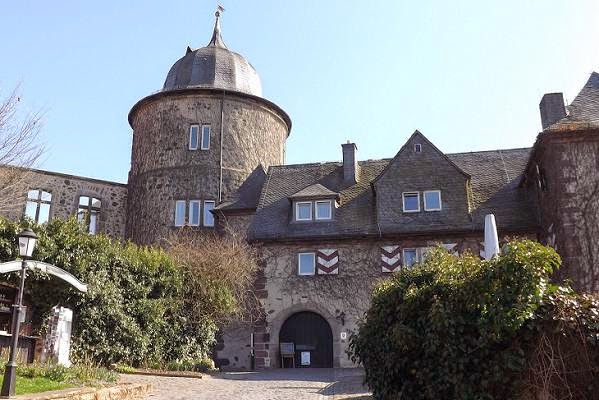 Another view of the inner bailey
The castles Trendelburg, Sababurg and Bramburg also feature in a tale not collected by the Grimm Brothers. A giant named Kruko (see Krukenburg) had three daughters, Saba, Brama and Trendula. Saba and Brama were Christians but Trendula remaind a pagan. Saba and Brama wept a lot for her sister, but to no avail; she stubbornly held to the old ways. In the end the sisters decided to build each their own castle. One day Trendula invited Saba for a visit and killed her; Trendula was struck by a lightning and died a grisly death. No prince anywhere in sight in that one.   ¶ April 22, 2015

What happened to the third sister?

Trendelburg itself looks as if taken out of a fairy tale :-) Perfect setting for stories and legends. I love the pic of the bridge and the curtain wall - great shot.

Indeed: what happened to Brama? I hope she lived happily ever after :-)
Have a lovely holiday, and I look forward to more of your photos when you get back.

Hank and Carla, the story doesn't tell us what happened to Brama. She may have ended up in a nunnery as typical fate for a woman, but there is none connected with her legend.