26 May 2015
Contested Imperial Fief, and A Lucky Escape - The History of Scharzfels Castle
I've briefly touched Scharzfels castle in the southern Harz back in 2009. I've now tried to find out a bit more about its history (1) to go with another set of photos. 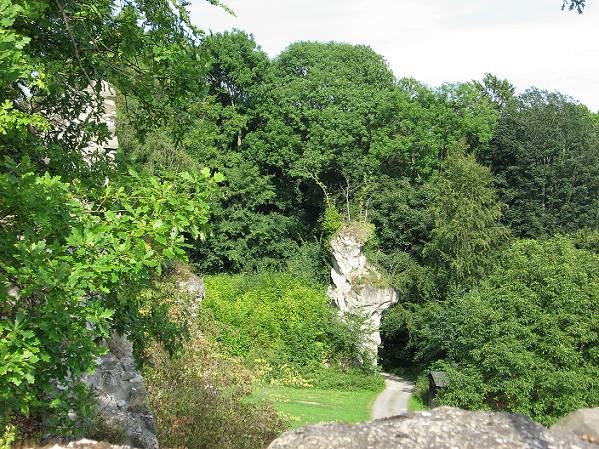 Mathilde, widow of Henry the Fowler and mother of the emperor Otto the Great, was given the monastery at Pöhlde as widow's seat in 952; twenty years later Otto granted the monastery the nearby lands and the village Scharzfeld. It is possible that there already was a castle on the promontory, but it is not specifically mentioned (2). Another mention I found online but can't prove, is said to be a charte or chronicle which names a knight Albrecht von der Helden as chatellain of Scharzfels castle in 1080. 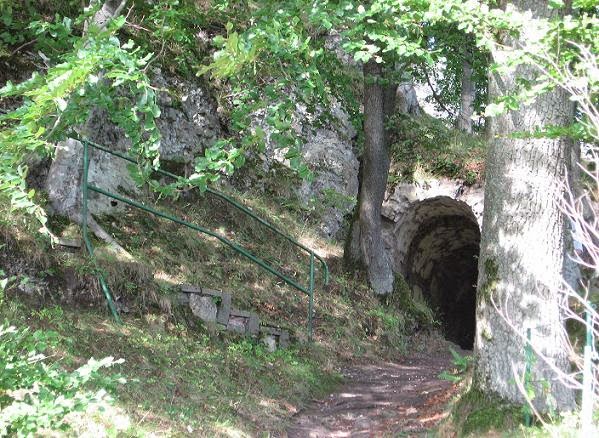 Entrance to one of the caves
The castle comes into the focus of history when the emperor Lothar of Süpplingenburg got the castle - then called Scartveld - from the archbishopric Magdeburg in 1131 (which implies there had been a castle for some time, so maybe that chatellain Albrecht did exist). It was an official act - likely in exchange for other lands - taking place during an imperial diet in Goslar. Lothar made the castle into what is called a Reichsfeste, an imperial fief, meaning a castle that belonged directly to the emperor (3). Lothar also seems to have extended the fortifications. 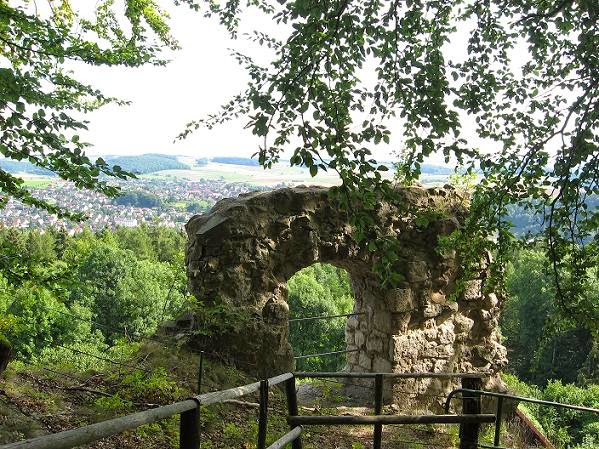 Remains of a sentinel gate in the upper (third) bailey
I could not reliably prove the information that the castle had been an imperial fief already in the 11th century when the emperor Heinrich IV gave it to one Wittekind of Wolfenbüttel in 1091. Wittekind died without male offspring, so the castle fell back to the realm in 1118 (4). A Wittekind is mentioned in Bruno's Bellum Saxonicum as one of the Saxon nobles who joined the rebellion against the emperor, but I can't say for sure if it is the same person. 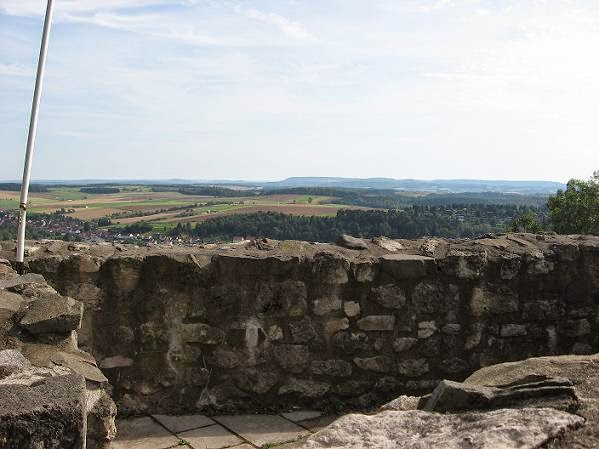 Remains of the curtain wall and battlements of the upper bailey
Lothar gave the castle and the bailiwick of Pöhlde as imperial fief to Siegebodo Count of Lauterberg-Scharzfels, probably the founder of the family of counts of Scharzfeld and Lauterberg (also spelled Lutterberg) - at least they took their name from those castles since 1132 resp. 1190. The counts of Scharzfeld died out in about 1297 (last mention in a charte), their cousins, the counts of Lauterberg held both castle as fief until 1372, when they too, died out. 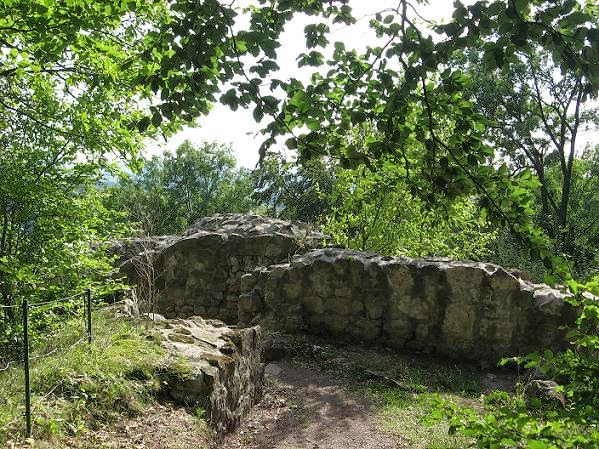 Remains of a house in the upper bailey
The next confirmed information dates to 1157 when the emperor Friedrich Barbarossa gave Duke Heinrich the Lion of Saxony lands in the Harz as reward, as well as exchanging some imperial fiefs, among them Scharzfels, for other lands (all great nobles had a checkerboard of lands spread over a vast area and they were usually interested in getting large connected bits, thus the excange). At that time Heinrich was one of the emperor's closest and most powerful allies. After Heinrich and Friedrich fell out and war began in spring 1180, the counts of Scharzfeld and other lords immediately sided with the emperor, thus the Scharzfeld kept the fief. 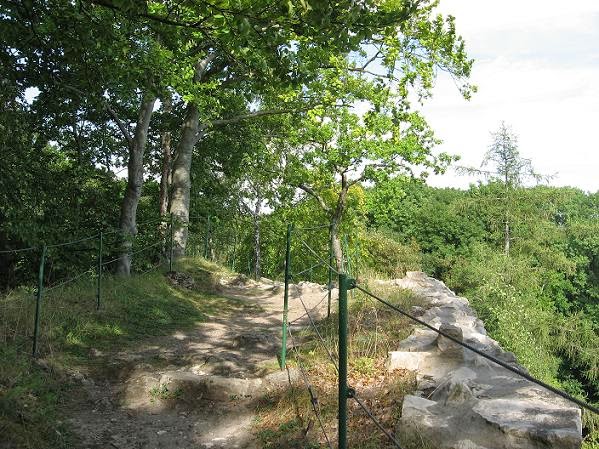 Way to the plateau of the uppermost bailey (fourth bailey)
Scharzfels Castle must have come back to the Welfen at some point after Heinrich the Lion had forfeited the fief and it was returned to imperial immediacy. When the lines of Lauterberg-Scharzfeld had died out, castle and likely the land as well were in possession of the Welfen line of Braunschweig-Grubenhagen. In 1402 Erich I of Braunschweig-Grubenhagen pawned out the castle to the counts of Hohnstein. It didn't keep the counts of Hohnstein from feuding with the duke, though (5). 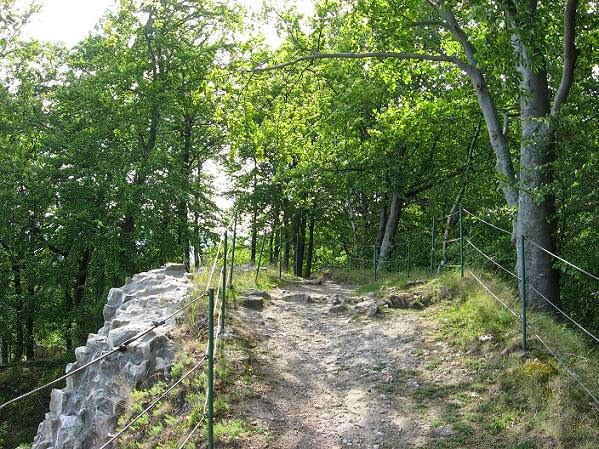 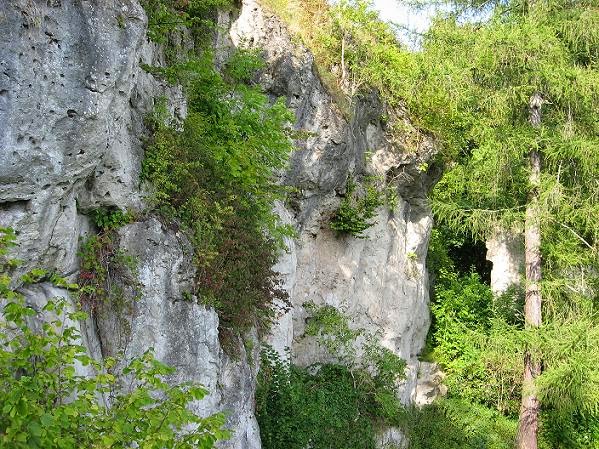 The northern curtain wall of the middle bailey from the inside
The castle played a - indirect - role in connection with the unfortunate Sophia Dorothea Electoral Princess of Hannover (1666-1726). She was married to her cousin, Georg Ludwig Duke of Braunschweig and Lüneburg, and King George I of England since 1714. The marriage obviously was not happy. Sophia Dorothea may have started an affair with the Count of Königsmarck; at least she confided in him by letters and planned an escape, which was to become her downfall. The Count of Königsmarck mysteriously disappeared when visiting her in Hannover, and Sophie Dorothea was accused of adultery, divorced, and exiled to spend the rest of her life in Castle Ahlden in 1694. 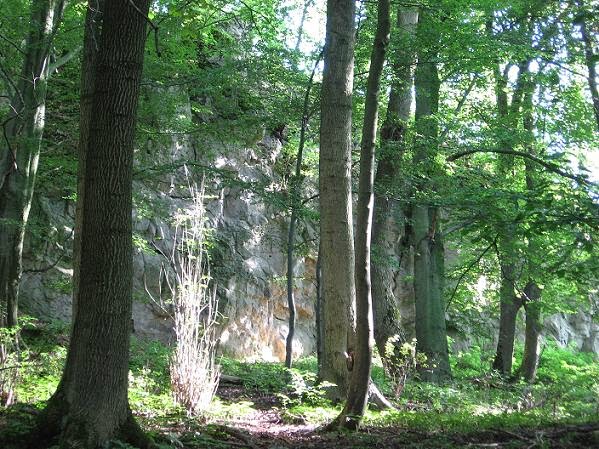 The natural curtain wall in the north from the outside
Her lady-in-waiting and confidante Eleonore of Knesebeck was imprisoned in Scharzfels Castle, confined to one room with only an elderly woman to wait on her. Her family strove to get her a proper legal process and offered a bail, but in vain. Finally they managed to convince the roof tiler Veit Rensch to help Eleonore to escape. He made a hole into the roof covering her chamber, drew her up with a rope and then both climbed down the 20 metres high, steep cliffs to firmer ground, where Eleonore's brother-in-law waited with some horses (1697). Eleonore fled to Vienna, obtained an imperial pardon, and eventually returned to Braunschweig where she led a quiet life. I could not find out what happened to the daring roof tiler; maybe he accompagnied her since he likely would have gotten in trouble staying at Scharzfels. 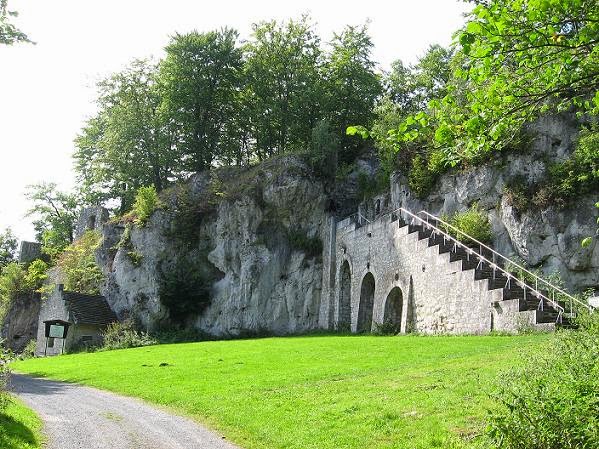 The dolomite rock with the 19th century staircase
During the Seven Years War between Prussia and Great Britain / Hannover on one side, and France, the Habsburg Monarchy, and Russia on the other, the castle was partly destroyed by a French army in 1761, after the garrison surrendered.

Luckily, King George V of Hannover and Duke of Cumberland was fond of old ruins and repaired part of the place, adding the new staircase in 1857. Most of his additions have now been dismantled, except for the stairs leading to the upper bailey. 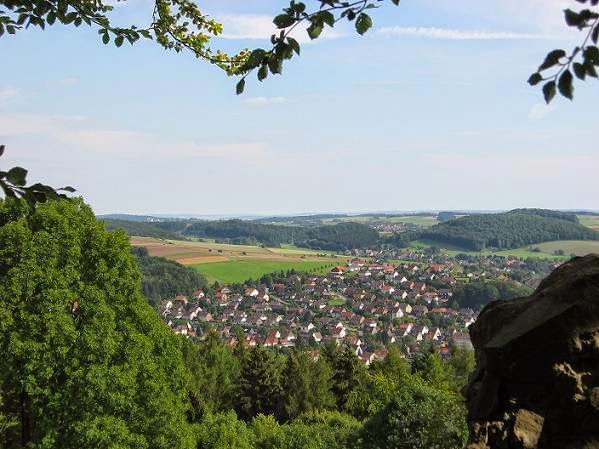 View from the castle to the village of Barbis
Footnotes
1) Unfortunately, a guidebook to the castle is no longer avaliable, so I had to rely on online information. I've decided to only present the bits as fact which all sources agree upon, and mark information I could not crosscheck as such.
2) I stay with the more careful sources that mention the existence of a castle as possibility, not as fact.
3) This is something all sites agree upon.
4) That bit of information may have been copied from a badly edited website set up to sell a self-published book, with some more unproven 'facts' like the Counts of Lauterberg holding the castle from 969 until the 11th century. The family first took the name of Lauterberg in addition to Scharzfeld when the sons of Sigebodo I split their heritage and built a second castle on a hill above the town of Bad Lauterberg (1190).
5) There may have been a political rather than a feudal reason. See this post.   ¶ May 26, 2015

Comments:
Well done on your excellent research, especially as there was no guidebook. What a shame there isn't much left, considering it was 'improved' in the 1800s.

I agree with Anerje, great post, especially as the research must have been quite a challenge. We too have similar castles in Poland - there are paintings or drawings showing them in perfect condition still in the 1800s or 1900s and today there'e hardly anything left. Pińczów is such a place - it was the greatest castle in the Lesser Poland district in the 16th/17th/18th century and now there's not a trace left of it, except for one small garden pavilon. Sad, isn't it?