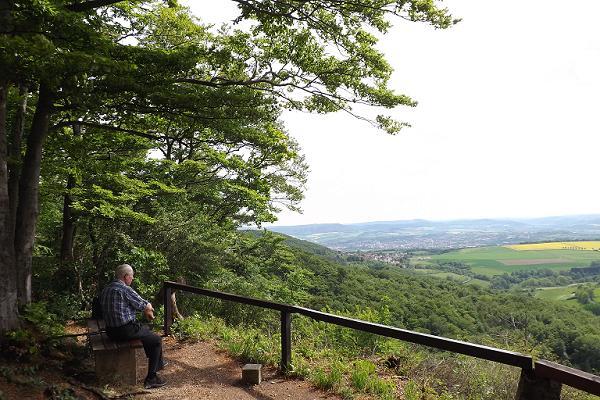 View from the 'Salt Woman' viewpoint towards Eschwege

The dominating feature of the area is the Gobert, a musselkalk ridge which runs from the Hainich in Thuringia to the Werra valley in Hessia. It is one of the largest sturzstrom areas in Germany - errant rocks and boulders of the prehistoric slides can still be seen all over the place. A sturzstrom is basically an XXL landslide with a much larger horizontal impact and distribution of material. Another pretty view
The plateau of the Gobert proper near the village of Hitzelrode is about 570 metres high and covered with calcareous beech forest and some rare orchids which I can never find. Several hiking tours explore the ridges and valleys that have been cut into the mussekalk by brooks and rivers. The tour we did is not so difficult, but there is another tour that comes so close to some cliffs that you need a good head for heights (which I don''t have). 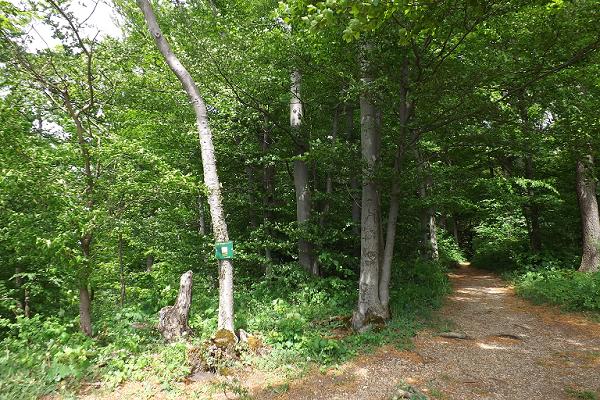 The way on top of the Gobert
The particular geology of the area goes back to the border between the Upper Bunter sandstone (some 245 million years ago) which consists of 'waterproof' layers of clay and silt, and the strata of water permeable musselkalk above it. Due to the water that permeates through the musselkalk and collects on the clay of the upper Bunter, the rocks formations in the area have been rather unstable, leading to landslides, sturzstroms and rockfalls, the formation of cliffs, crevices and caves. 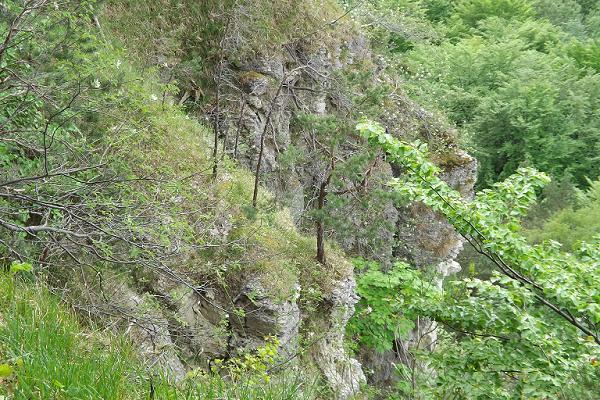 Cliffs at the Horse Cave
Both rock strata - together with the third and youngest, Keuper - belong to the Germanic Trias which followed the period of the Zechstein Sea. The Zechstein Sea and the following age of alternating arid times and ingressions by the sea stretched from England in the west to Poland in the east; it's nothern border were the Iro-Scottish highlands, then still connected with northern America. 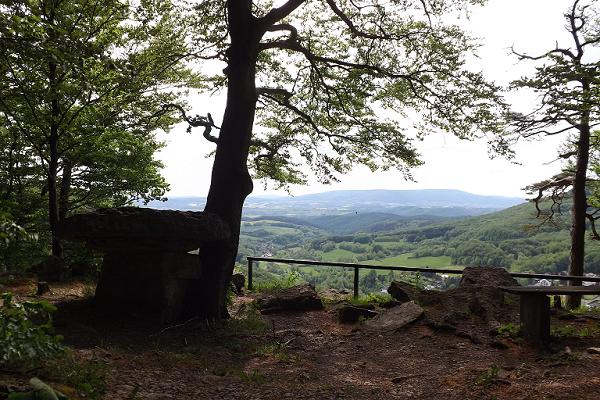 New vistas around every bend
Well, back to the hiking. We had to ascend a pretty steep path until we reached the plateau, but from there it was nice going through the beech forest, with several pretty views at the surrounding landscape. Those spots are well protected by rails and offer benches for a rest. Some of them are connected with historical events or interesting rock formations. 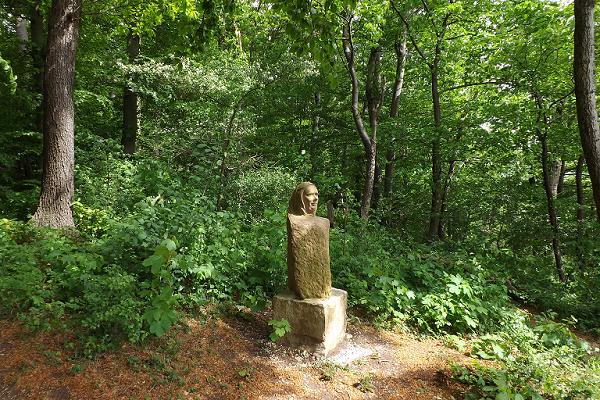 The Salt Woman
Another geological feature are the salt deposits of the Zechstein Sea which have come close to the surface in some spots thanks to the geological changes. One of these deposits can be found nearby - the town Bad Sooden-Allendorf is named for it. The spot on the photo above was either a resting place for women carrying salt along the ridge path, or the guardpost of the wives of salt smugglers who could see far into the valley below and warn their men of patrols. 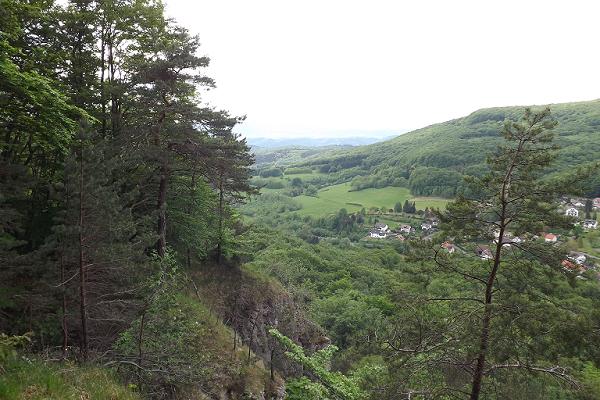 View from the Horse Cave towards the village of Hitzelrode
Another interesting spot is the Horse Cave or Horse Hole (Pferdeloch). The Horse Cave is a ravine with several musselkalk pillars and chimneys (you can see a photo of the cliffs above). It is said that the ravine has been used as hiding place for the villagers' horses and cattle during the Thirty Years War. 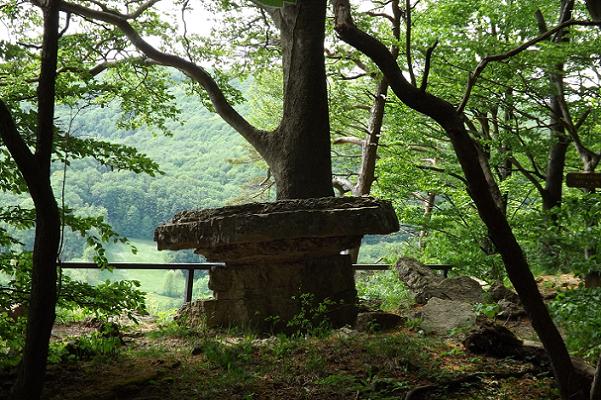 The Wolf Table
The Wolf Table (Wolfstisch) is a musselkalk plate on a boulder of similar material - the combination looks pretty much like a table. It is only a few metres away from another cliff and may have been used as sacrifical place during the Iron Age and perhaps as a secret meeting place in the Middle Ages. It surely is the sort of natural feature that would have been interpreted as having been created by the gods. 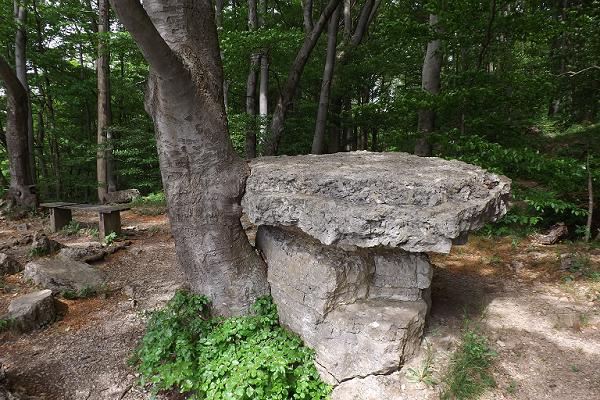 Wolf Table, seen from a different angle
It were not the gods, of course, but erosion. The cliff once had been a larger plateau that eroded over time. Besides the Wolf Table, there are several more rocks that have withstood erosion a bit better than the surrounding material. But some - likely far - time in the future, the edge of the cliff will reach the table and it will slide down into the valley. 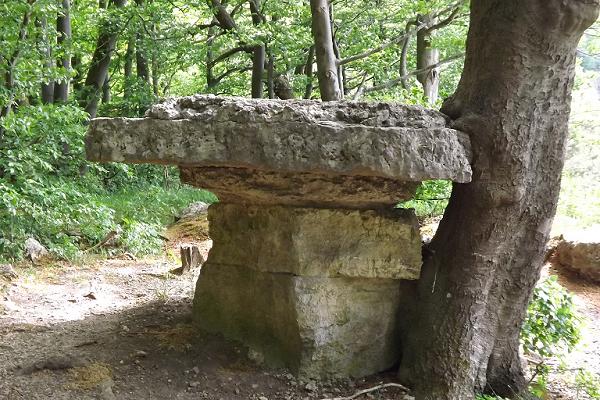 Closeup of the Wolf Table
The inner German border after WW2 ran directly across the Gobert. The American occupied part in Hessia became part of the BRD in May 1949, while the Sovyet occupied land in Thuringia was part of the GDR since October 1949. For 40 years, this part was inaccessible for us though we lived in Eschwege in the 80ies. 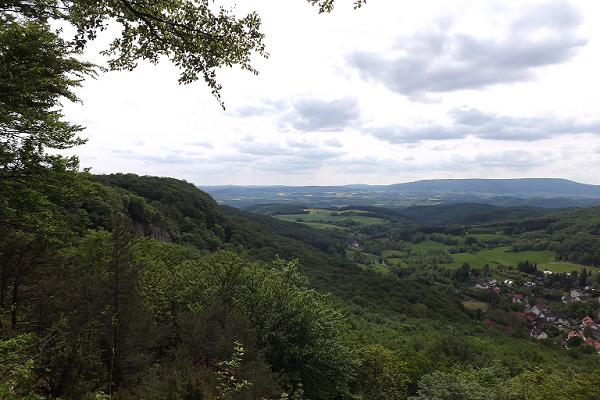 View from the Wolf Table into the valley
There is a second loop of the way on the Goberg plateau on the Thuringian side, which runs directly on the Green Belt for some part. The Green Belt is the result of the former border which had been depopulated and served as refuge for rare species of fauna and flora. After the German reunion, large parts of the belt have been turned into nature parks and biosphere reserves where hiking is allowed, but no building projects and such. 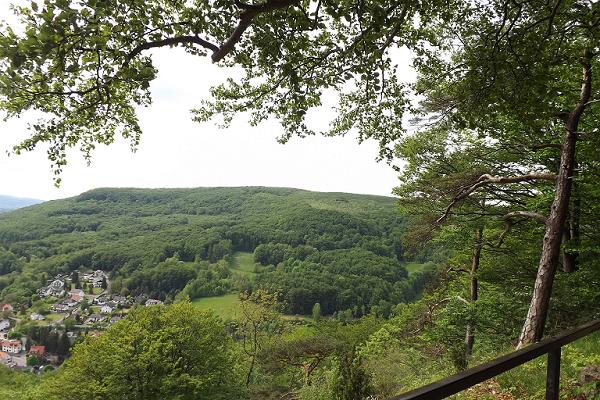 View from the Wolf Table, different angle
We plan to do the second circular route as soon as the weather will allow it. For now, I'll leave you with another pretty view.
¶ July 31, 2016