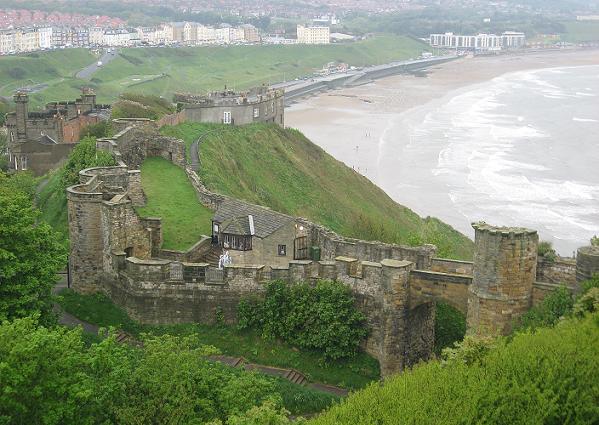 The barbican seen from the viewing platform;
the double D-shaped outer gate is to the left, the first bridge to the right

Since the castle is situated on a headland with steep cliffs (about 90 metres / 300 feet high) on three sides, there was only the landward side which needed additional protection. A double ditch was cut and curtain walls put up; the remains of the present ones date mostly from the 12th and early 13th centuries. The entrance was defended by a gatehouse with a double D-shaped tower on the land side, as well as two drawbridges (which today have been rebuilt in stone) and a walled-in walkway. There likely had been a portcullis, too. 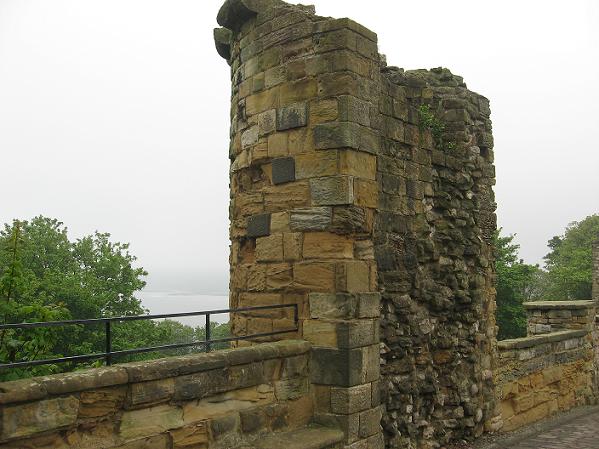 Tower protecting the barbican bridge
The barbican, which is first mentioned in a source from 1175, has been altered considerably during the history of the castle. The tower protecting the walkway between outer gate and castle gate was built by King Henry III in 1243, for example. You can see the different stones: ashlar for the filling, and cut stones for the shell. 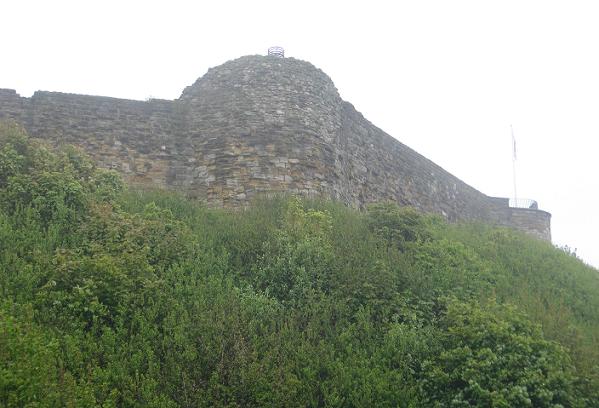 One of the wall towers seen from the outside
The curtain walls were futher protected by towers; 12 in all, which were added at different times. The towers along the inner bailey were hollow, allowing the insertion of two floors - with arrow slits - while the towers further toward the sea were solid with battlements on the top. 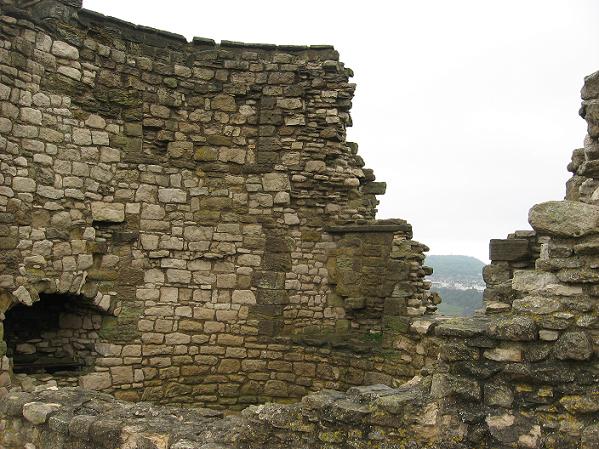 Interior of one of King John's towers
Several towers were added by King John; those are D-shaped, a 'modern' design for England at the time where most towers were still suqare. One of the towers in the inner bailey - albeit no longer standing to its full height - holds a viewing platform for the visitors of the castle which gives a fine view over the landward defenses. King John's chambers with the keep in the background
King John also build what is refered to as King John's Chambers or Mosdale Hall; a two storeyed hall built against the townside curtain wall in the outer bailey. Only the basement survives today. The upper storey would have housed the royal appartments and maybe a chapel as well; the rooms were heated by fireplaces. The basement storey consisted of a hall and smaller chambers which probably were used by the household officials. The staircase was located in a tower adjacent the main building. But the hall fell into ruins in the 16th century. It was briefly reused as barracks during WW1 when brick buildings were put up inside the remains, but those were destroyed and dismantled after the war. 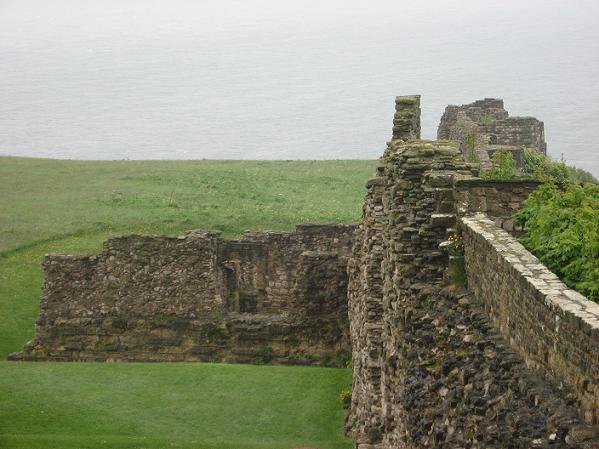 Outer curtain wall seen from above, with the remains of Mosdale Hall
The inner bailey was once protected by its own curtain wall and ditch that separated it from the outer bailey, with two gates for access. Remains of wall and ditch can still be seen. Today, only the keep survives, but at the time of King Henry II the inner bailey included several more domestic buildings. Some of the stones in King John's Chambers were reused from the remains of those buildings which must have fallen into decay at an early stage. 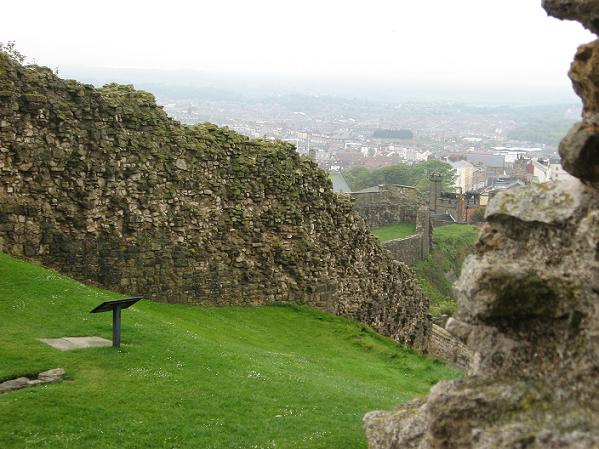 The inner curtain walls
The rectangular keep, even in its ruinous state, still dominates the castle and appears on several of the photos I added in my prior posts. King Henry II put it on the highest spot of the headland where one could overlook the town and approach to the castle. The keep was built some time between 1159 and 1169; it was about 27 metres (90ft.) high, with walls that were up to 3.5 m (12ft.) thick. 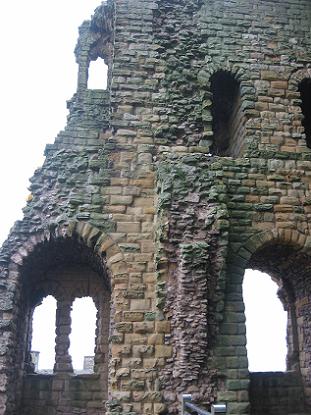 King Henry's Norman keep, inside
The keep was erected on a sloping stone base and consisted of a basement and two additional storeys; the access was by a door in the first floor. The original staircase was housed in a tower, a forebuilding, which had two floors that did not correspond to the storeys of the main keep.

Originally, each corner of the keep proper had a turret overlooking the battlements which made it look even taller. Those battlements were higher than the countersunk roof of the quarters inside the walls (1). Countersunk roofs were rather common in Norman keeps; the fake walls hid the level of the actual roof in case of bombardements during a siege. 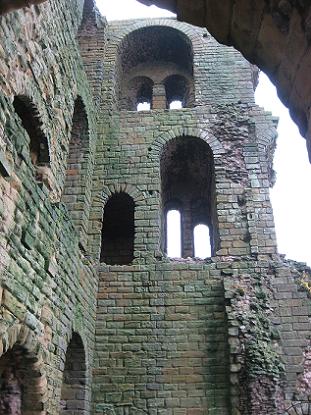 Interior of the keep, different angle
The present level of access is above the basement from where one can see the remains of the walls and window openings, as well as a fireplace. Some of the windows have scuncheon seats as you can see in the photo above (the uppermost window with the double arch).

Both first and second floor were divided into two rooms along the east-west range. Those walls contained one great arch on the first and three smaller ones on the second floor. Traces of those partition walls remain as well (see the first of the photos of the keep's interior here). The staircase, and latrines on both floors were hiding in the thick walls. 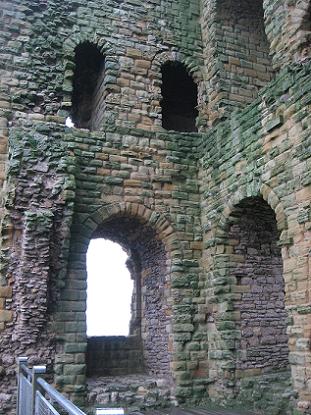 Another shot of the keep from the inside
The basement was used for storage. The first floor contained the great hall which was semi-separated by the arch. The chapel was a few stairs above hall level in the forebuilding. The second storey with the two rooms may have provided living quarters for the king, with the first room directly accessed from the staircase serving as a more official reception room and the second as his private quarters

The keep likely served as place for grand events during the entire Middle Ages even after King John built the living quarters at Mosdale Hall. 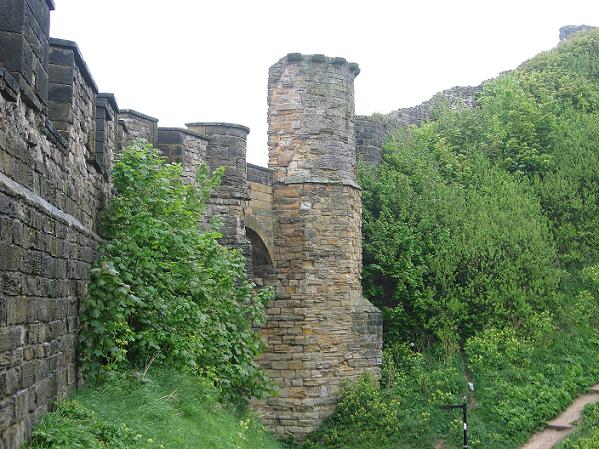 Barbican wall with merlons, Henry's Tower (middle),
and curtain walls seen from outside
Footnotes
1) It has formerly been assumed that there was an additonal storey, since there are traces of windows in the north wall, but any support for another floor is missing, as are fireplaces and hints to partition walls.

Comments:
It's been a while since I've dipped in to The Lost Fort. Glad to see you're keeping up the high quality, superbly detailed posts and the fantastic images, Gabriele! I stumbled on one of Kirsten Campbell's blog posts when I was researching the Picts. Sadly, Valerius has ridden his last patrol and I've moved on to a different era now. Hope all's well with you. Doug Jackson

Hi Doug,
thanks for stopping by and the kind comment. My corner in the internet has become rather quiet these days with the raise of Facebook, Instagram and such, but I still like it here and I'm glad there are still people who read my blog.

Poor Valerius. But he rode well for nine books, so he deserves some rest - eternal, I suspect, because he'd not spend a long time in peace before trouble found him again. *wink*