25 Oct 2010
Walkenried - From Monastery to Museum
I have too many photos in my files. When I posted those pictures from odd angles a few weeks ago, I added one from Walkenried monastery and realised I had never introduced you to the place. So here we go.

Walkenried was founded as Cistercian monastery by Countess Adelheid of Clettenberg in 1127, member of one of the smaller and more obscure noble families in the Harz area. 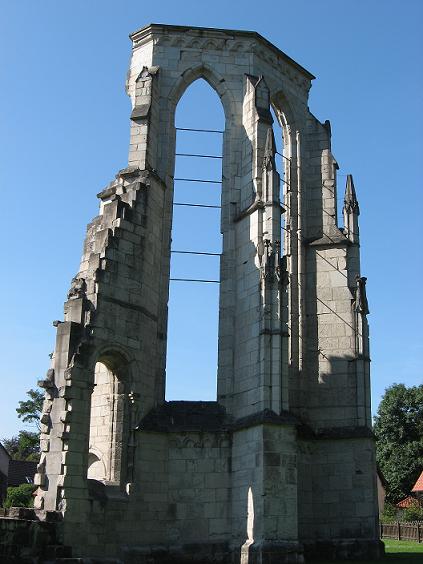 (Remains of the choir against the autumn sky)

The Cistercians were an enclosed order which means they had to stay within the confines of the land belonging to the monastery. Other orders, like for example Benedictines and Franciscans, enjoyed more freedom of movement. Cistercians were a fairly new order that started in Citeaux / Burgundy in 1098 out of the Benedictine rule which they still fowllowed in a purified version. Adelheid had met them in Kamp at the lower Rhine. She invited some monks to move to the Harz foothills and offered them a suitable piece of land, sufficiently distant from settlements, with water access and chances of agricultural development. A first convent moved in and started building the first church on the grounds, in the older Romanesque style. They got additional money from Emperor Lothar of Süpplingenburg (the one who founded the church in Königslutter), and in 1137, Pope Innocenz II officially confirmed the foundation.

The white monks (as they were called because of their white habits) started to drain the swamps along the southern Harz to gain arable land, got involved in mining in the Harz mountains that are rich in silver and other ore, and also in financial transactions. Their possessions - fields, mines, forests and charcoal kilns - grew during the next two centuries and extended outside the Harz area. More than a hundred monks and two hundred lay brothers worked on Walkenried lands in the 13th century.

It was one of the foremost tasks of the Cistercians to cultivate lands and establish an infrastructure in hence 'wild' areas. They had special knowledge in techniques like draining swamps and improving soil for the growth of corn, or the breeding of farm animals. Though the monks did a lot of work themselves, the also employed lay servants. 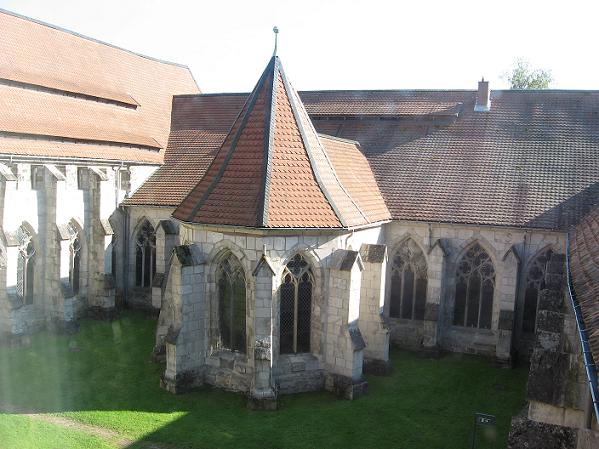 Walkenried became one of the richest and politically important Cistercian monasteries. Heidenreich of Walkenried became abbot of Morimond, one of the four Citeaux daughter foundations in 1202. Duke Heinrich the Lion spent some time in the monastery to recover from a riding accident (1194) and his son, Emperor Otto IV, received the sacrament of the extreme unction from the hands of the Abbot of Walkenried as he lay dying in Harzburg Castle in 1218. 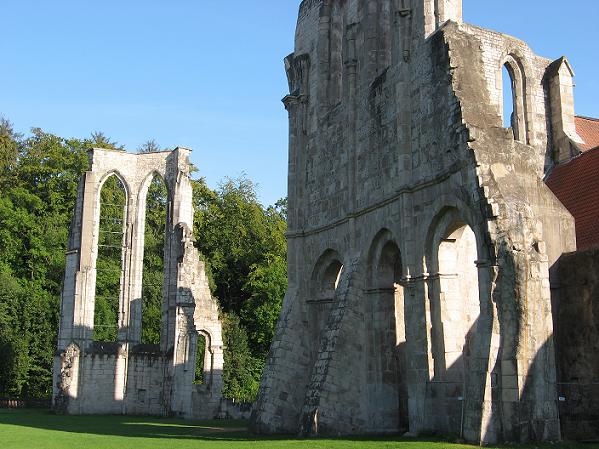 View from the main nave to the ruins of the choir
The timeline on the official website mentions a meeting of 53 Cistercian abbots under the leadership of Abbot Heidenreich and Emperor Otto IV in 1209. Too bad nothing is mentioned of the reason for that meeting, but it surely underlines the importance of Walkenried. Heidenreich initiated the building of a new church in the early Gothic style, an endeavour that was financially supported by Otto.

The new building followed a layout taken from Morimond, a three nave basilica with five bays in the main nave. The eastern part was used for service since 1253, but the entire church would only be finished in 1290. With a length of 90 metres it was one of the largest sacral buildings in northern Germany at that time. The original choir was replaced by an equilateral polygon in the 14th century - some of it is left today. 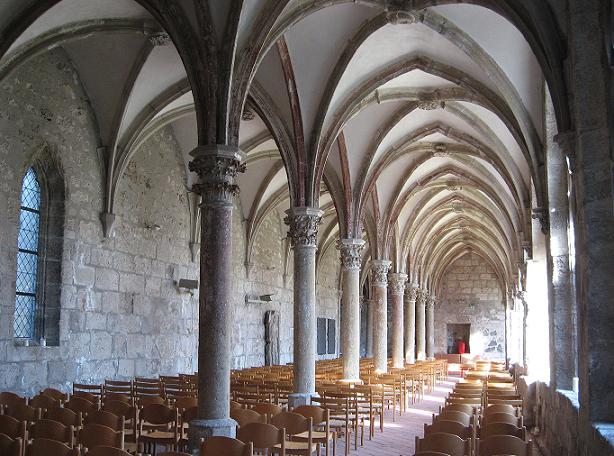 The double cloister
The enclosure (the cloister with the rooms above, like dormitory, library etc.) was finished in 1330. It is one of the most beautiful examples of Gothic cloisters in Germany with an unusual double-naved northern wing where the gross grain vaults are supported by an additional row of pillars. This part of the cloister is today used as concert hall.

The decline of the monastery began in the 14th century with a crisis of the Harz mines, plague and other problems. The monastery was attacked during the Peasant War in 1525, though the monks had fled and taken most of the valuables and manuscripts with them. But the crossing vault was badly damaged and the church could no longer be used. When the monks returned, they changed the chapter house into a church. 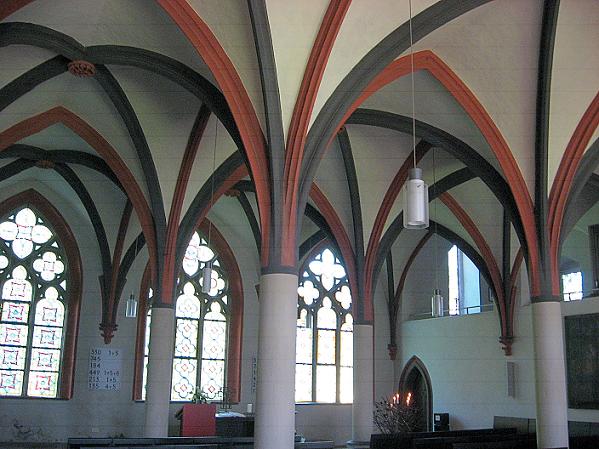 Chapter house
The few remaining monks converted to Protestantism in 1546 and the church was used as quarry. The enclosure housed a Latin school since 1556, and most of the lands were sold or pawned out.

The counts of Hohnstein took over the administration of the monastery in 1578 until the line died out in 1593 and Walkenried fell to the dukes of Braunschweig-Lüneburg. An interesting tidbit is that the father of the last count, one Volkmar Wolf of Hohnstein was married to Agnes of Everstein, descendant of the family we have met in Kugelsburg Castle. 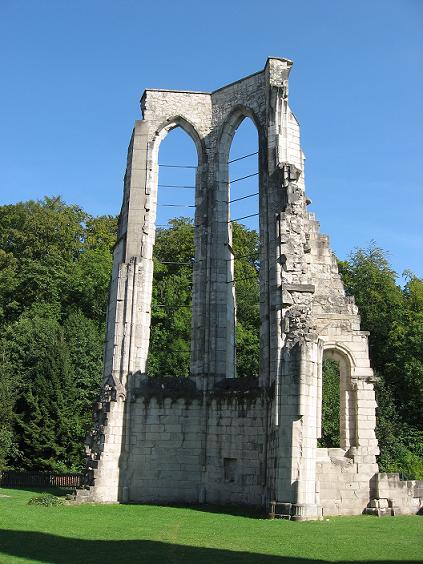 (Another shot of the remains of the choir)

The remains of the church and the enclosure that was still in decent condition have been preserved and renovated since 1977, when the monastery was taken over by the Foundation Braunschweigischer Kulturbesitz. Part of the choir polygon had to be rebuilt to prevent further decline in 1988, and the cloister got glass windows. Archaeological digs showed some foundations of the older Romanesque church.

Today the buildings are still used. The chapter house is a Protestant church, concerts take place in the cloister since 1984, and a new museum about the Cistercians and about the history of Walkenried monastery opened in the rooms above the cloister in 2006. The museum won a few prizes for innovative presentation of history - and rightfully so; the hour we spent there wasn't enough to do it justice, so it's on the Have to Go There Again-list.  ¶ October 25, 2010

Comments:
Wow, what a lovely, lovely place (and a great blue sky too!) I especially like the chapter house.

Very impressive, especially that the buildings are still in use after 900 years. Countess Adelheid might have been pleased about that.

What a beautiful building!

What a beautiful site! I wonder if the statue pictured on the official website Timeline page is of Countess Adelheid?

Carla, yes I think she would be pleased.

Annis, good question. Have to try and find out.

And you are right of course...I NEVER tire of them. Though they DO tend to blend in together...

Stag, I can't blame you for mixing them up. It's sometimes difficult to tell a bunch of churches apart if you only have photos to go by.

Visiting them in real is different; there's always a particular atmosphere to a place, for those who can feel it.