10 Jan 2009
Winter Wonderland - Views from my Balcony
This post is a collection of several winter posts with photos taken from my balcony, because I love me some snow (and hoarfrost). 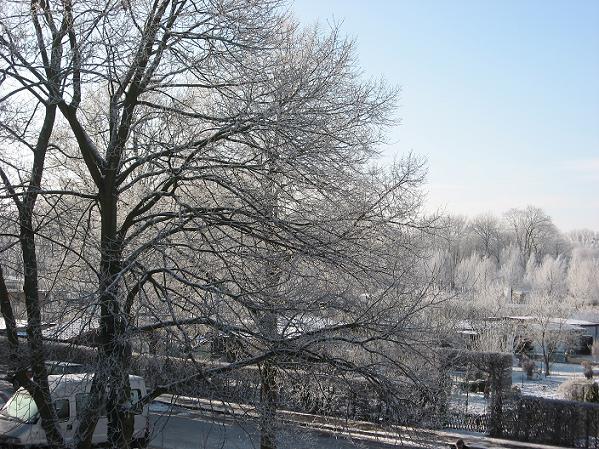 Hoarfrost on the famous tree in front of my balcony

The temperatures demonstrated how far they can get down when they really want. The record was -24°C on the night to Tuesday. And I seem to be the only one to like such temperatures, lol. 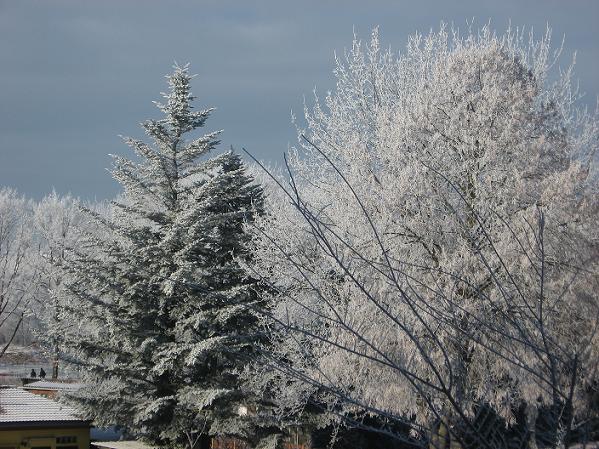 View from the kitchen window
We got a bit snow, too. I took a few pics when it fell at night. The ones I took with a flash make the snow flakes sparkle; it's a very pretty effect. Snowfall at night
It's not enough for skiing, though. There is more snow in the Harz, but since I only have the weekends to myself these days, and the Harz is overrun by tourists who can't drive in winter, I haven't been there yet. 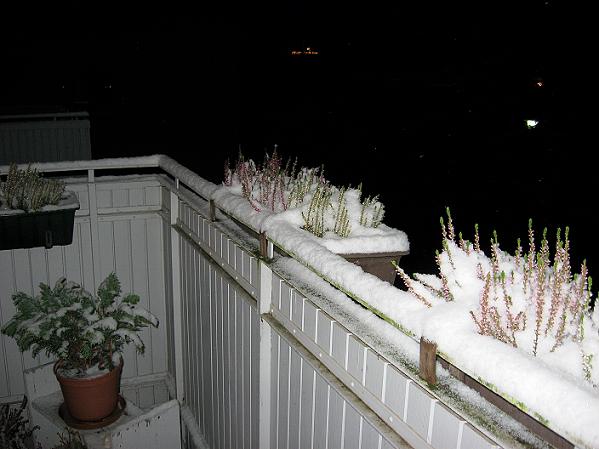 Snow on my balcony
It's still very cold. It makes you wonder how people in pre-central heating times coped with winters like this. Those castles must have been freezing cold - the fireplaces were not enough to warm the large halls, though maybe the cooks were happy. Alianore has a post about some cold winters during the time of Edward II. 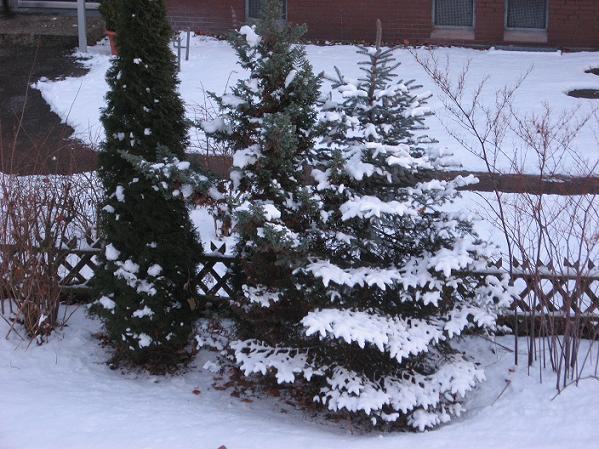 Trees in the garden after sunset
According to the forecast, the cold will stay with us a bit longer. Some more snow would be nice, of course, but you can't have everything. It's a lot more winter than I got those last years, and I missed it. View from my balcony a few minutes ago
Inside, it's nice and warm, the candles are burning and I got some hot tea and ginger cake. The writing still goes reasonably well though not at Nano speed. And of course, there are plotholes you can drive a truck through which I now have to fill in. 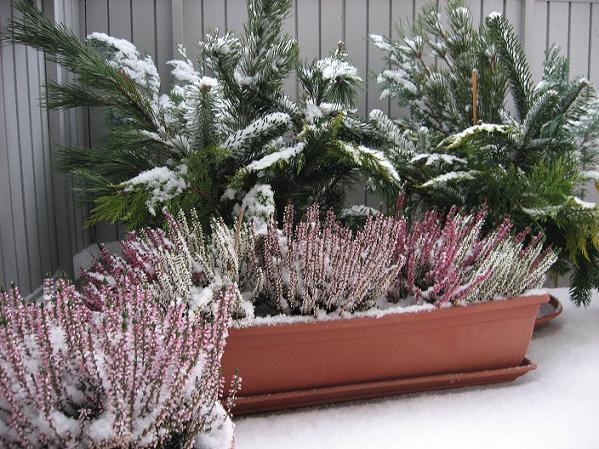 Snow on the winter plants on my balcony
Advent time with snow; a rare thing in Germany. The flip side of this time is that the town is always crowded with people and grocery shopping is even less fun than the rest of the year.

With the new year (2010), the winter has come to Germany with snow and temperatures of minus 10°C -15°C during the nights and still below zero during the days. 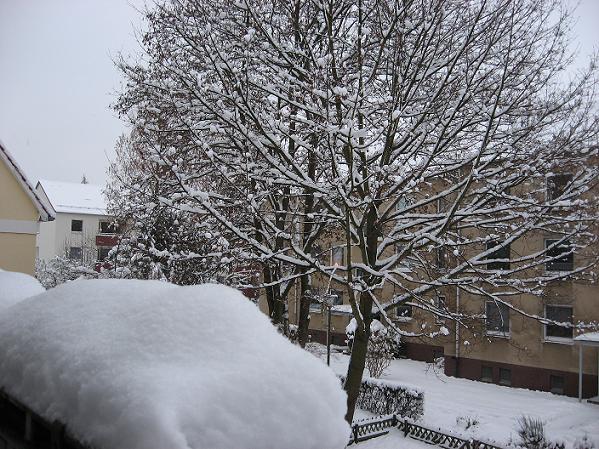 Fluffy stuff
The pretty pillows in the foreground are some of my potted heather. Yep, we got a nice amount of the white fluff this time, and more is to come next weekend, hopefully. 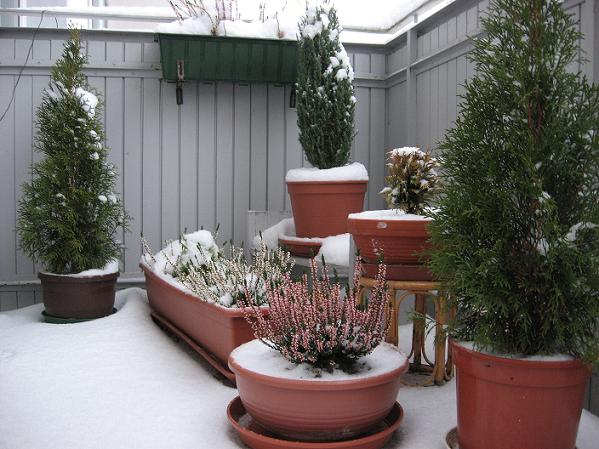 My balcony again
My balcony is somewhat sheltered by the balcony above, but some snow found its way inside to powder my conifers. 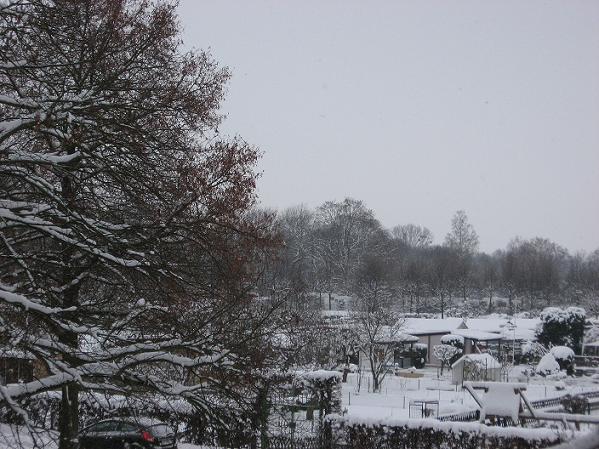 Gardens in the snow
The summer gardens in the Leine valley offer a beautiful view from my balcony all year round. Now they are snowed in - let's hope for some time. Rainy winters are so dreary.
¶ January 10, 2009

Comments:
Lovely photos and I, too, enjoy winter...even the cold. Though for the trees and plants it is better to have a layer of snow to protect the ground.

The pix are lovely - like Fairyland! But the thought of 24 below is horrific. I feel cold as soon as the temperature drops below 20 degrees Celsius!

Ooh, snow! We had an early snow, but nothing since then, not even very low temps. Beautiful pictures.

Happy New Year, Gabriele! The pics are gorgeous, especially the snow at night one.

I love really cold temperatures, too. I lived in Poland one winter, and had lots of days where the max daytime temp was about minus 15 or 18 C, falling to about minus 28 or 30 at night. Fantastic!

Beautiful photos, Gabriele. I especially like the night shots.

Oh, the hoar frost is beautiful. I've only ever seen it like that in Norway.

I have a real winter as well (finally). It started to snow on Christmas eve and since then the temperatures kept low and kept the snow all the while. I didn't had such a winter in long time and I have to admit I love it :)

Beautiful photos! I shoveled 7 inches of the stuff yesterday...that's the not so fun part of all that gorgeousness.

Some parts of Canada are -57F/-49C this week and its all heading to Boston by Friday for cold cold times, highs of 10F/-12C and windchills at -20F/-28C. NOT looking forward to that.

Pretty photos. And here we are sweltering in heat. When we went to National Park it was 40C and the tar melted on the roads.

Shelley, that sound much worse than really cold temperatures. At leas to me; anything above 25°C is a heatwave. :)

Great pics! Even though I'm no fan of the cold (or the heat), you made it look so beautiful. I really liked the one of the snowflakes at night!