11 Dec 2010
St.Mary's Abbey in Magdeburg, Part 2 - Emperor Otto IV and Archbishop Adalbert II
After the building of St.Mary's Church was completed under Archbishop Norbert, little has been changed during time. A few Gothic elements like cross grain vaults in the naves and Gothic windows in the apses have been introduced, the columns in the main nave were replaced with pillars (between 1220-1240), but overall the Romanesque character of the church remains intact. 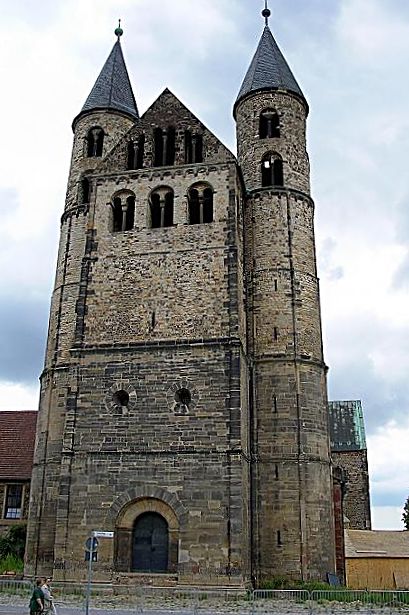 On Good Friday 1207 the old cathedral in Magdeburg was destroyed by a fire. St.Mary's Church was immediately elevated to the status of cathedral so Archbishop Adalbert II of Käfernburg could celebrate the Easter mass there.

A cathedral (German: Dom or Kathedrale) usually refers to a church that contains the seat of a bishop and serves as central church of a diocese or episcopate. But the word is also used for Protestant churches that started out as cathedral, and sometimes simply for large and important churches (St.Victor in Xanten is technically a chapter church but refered to as Xantener Dom - Cathedral of Xanten; while other chapter churches are sometimes called minster; but that denomination is also on occasion used for former abbey churches; it's very confusing, just look at a name like Westminster Abbey).

Adalbert II (alternate spellings: Albert, Albrecht) had the cathedral rebuilt in the Gothic style (that's another post that needs to be rewritten), but for several years he had to use St.Mary's Church. One important historical incident - and another thread in the tapestry of German history I try to weave on my blog - taking place in that church was Adalbert proclaiming the excommunication of Emperor Otto IV in 1211.

Adalbert of Käfernburg, born 1170, was the son of a Thuringian count, destined for a clerical life. He studied in Paris and Bologna and became provost in Magdeburg in 1200. 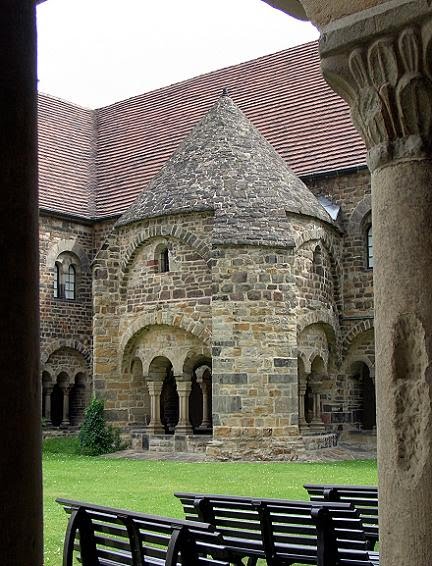 The archdiocese of Magdeburg had traditionally sided with the Staufen against the Welfen. Archbishop Wichmann had been a stout supporter of Friedrich Barbarossa and caused Duke Heinrich 'the Lion' of Saxony a lot of trouble. In the quarrel between Friedrich's son Philipp of Swabia and Heinrich's son Otto, Magdeburg took the side of Philipp, and his party elected Adalbert archbishop in 1205. Philipp, who considered himself rightful king (as did Otto), immediately invested Adalbert who kept supporting Philipp though that was not without risk. The main seat of the Welfen, Braunschweig, is not so far away from Magdeburg, and Otto had sent some troops before. They could not take the fortified town - and probably didn't intend to at the time - but they pillaged and burned the lands belonging to the diocese. Not a nice thing to do, of course, but it was a normal part of Mediaeval warfare (and Wichmann had done the same to Duke Heinrich, destroying fe. the town of Haldensleben and integrating it into the archdiocese of Magdeburg).

Pope Innocenz III who supported Otto, confirmed Adalbert as archbishop only after Adalbert had visited him and tried - not without success, it seems - to work towards an agreement between Innocenz, Otto, and Philipp.

But when Philipp of Swabia was assassinated in 1208, the Staufen party lost a great deal of power and influence. Otto suddenly found himself King of Germany uncontested, esp. since Pope Innocenz did not want the Staufen heir and King of Sicily, Friedrich II (son of Heinrich VI and grandson of Friedrich Barbarossa) to become King of Germany, and continued to support Otto.

So Adalbert decided to open up negotiations with Otto. He wanted concessions, of course. Otto should permanently renounce all Welfen rights to Haldensleben (which Wichmann had annexed in 1181), pay 3000 gold marks towards the new cathedral, and accept Adalbert as first counsellor. Adalbert's support must have been important for Otto to agree to those conditions. Otto was indeed elected king - again, lol - in Frankfurt a few months after Philipp's death, and this time unanimously. 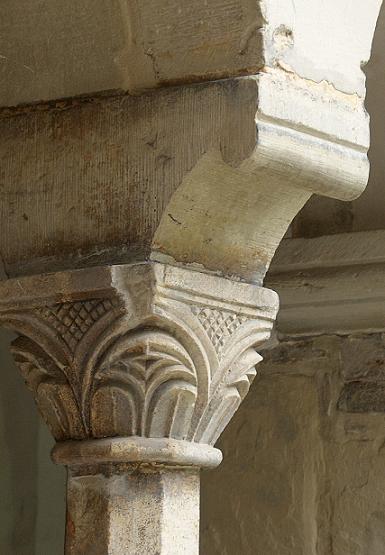 (Pillar capital from the cloister walk)

Adalbert accompagnied Otto to Rome where he was crowned emperor in October 1209. Pope Innocenz wanted concessions, too, the most important being a promise that Otto would not claim the rule over the towns in Italy that traditionally belonged to the German kings, and over Sicily.

A few days later, on their way back from Rome, Otto and Adalbert quarreled big style. Unfortunately the chronicles do what they like to do (ask Kathryn, lol) and don't mention the reason for the quarrel. Several guesses have been made; one that sounds plausible is that Otto obviously was slow in signing over Haldensleben to the archdiocese of Magdeburg. We'll see that he tried to wiggle out of other agreements as well.

The following year Otto returned to Italy to do exactly what he had promised not to do: having Italian towns hail him as king. It's an understandable move, in a way, since there was always the danger that Friedrich II would try the same, but to the pope, it was blatant oathbreaking. Which isn't entirely true; from what I could find out it was not a formal oath but a private promise, and there's a difference between those in the Middle Ages.

Well, Innocenz excommunicated Otto and told the German princes they were free to elect another king and emperor-to-be. They chose Friedrich II who in fact had the strongest claim among the members of the Staufen family. Otto gallloped back to Germany, but his support was melting like the snow outside my window. Adalbert had joined the princes who voted for Friedrich but on the other hand, he was loth to announce Otto's excommunication in his diocese. It took an angry letter from the pope until Adalbert finally proclaimed Otto an heretic and all oaths towards him invalid in front of the altar in St.Mary's Church in February 1211.

Otto in turn gathered the followers he still had in a Imperial diet and put Adalbert and the archdiocese of Magdeburg under Imperial ban (basically declaring the people that lived on the land outlaws, including the archbishop). The surroundings of Magdeburg were attacked by Otto's armies several times in the years to follow; once Adalbert barely escaped capture. One may wonder why Otto put so much effort into that adventure, esp. after the lost Battle of Bouvines (1214). My guess is that Otto needed to give the vassals he still had in Saxony and at the Lower Rhine a chance to gain some riches because he had not much left to distribute. A catch like Adalbert or conquering a rich town like Magdeburg would have filled a few purses and kept a few vassals by his side.

Otto IV died 1218, Adalbert II 1233. He was buried in the cathedral which was partly finished at that time.

Comments:
Fascinating to read all this German history! Love it!

"Unfortunately the chronicles do what they like to do". Ohhhh yes. :-))

Yeah, you'd think that if a chronicler deems a quarrel important enough to mention it, he could mention the reason for said quarrel as well. Otto and Adalbert traveled with a large entourage; there must have been people around who heard it - I can imagine the two men got a bit loud. Otto was a Plantagenet, after all. ;)

I love the way you can see different building dates by the sizes of stones in the walls. Additions are hard to hide!

Stag, yes there are changes in the stonework, though some of it may be due to the repairs after WW2. Few German churches escaped that on unscathed.

Anerje, the compliments go to my father this time. We visited Magedburg in 2005, before I got my digital camera. (He reads my blog so he will see the comment.)

It must run in the family:>