23 Feb 2010
Birdoswald - The Timber Halls
I'm being very lazy with this post, because Carla Nayland has written such excellent essays about the Dark Age activity on the site of Birdoswald (the Roman Banna), one of the Hadrian's Wall forts, where excavations have brought to light traces of two large timber halls that made use of the Roman granary foundations.

I'm only going to add the illustrations. :) 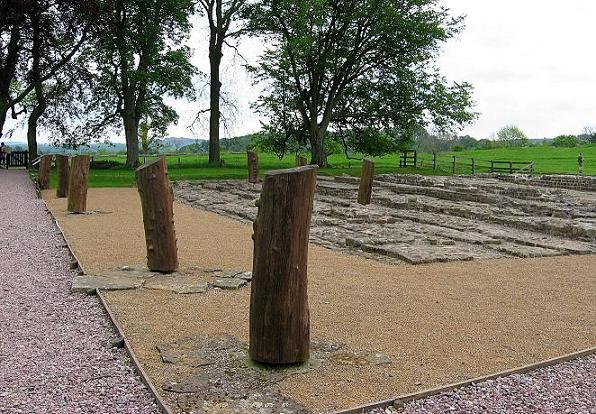 Row of posts compared to the street and north granary foundations

The second timber hall has been excavated in 1987 and marked with timber posts in the ancient post holes so that visitors can get an image of size of the hall and its situation in relation to the granaries.

A somewhat earlier timber hall had been constructed over the south granary, but it was no longer use when the northern hall was built. This makes sense because a timber building had an average life span of 30 years and would then be rebuilt on a new place instead of undergoing repairs. 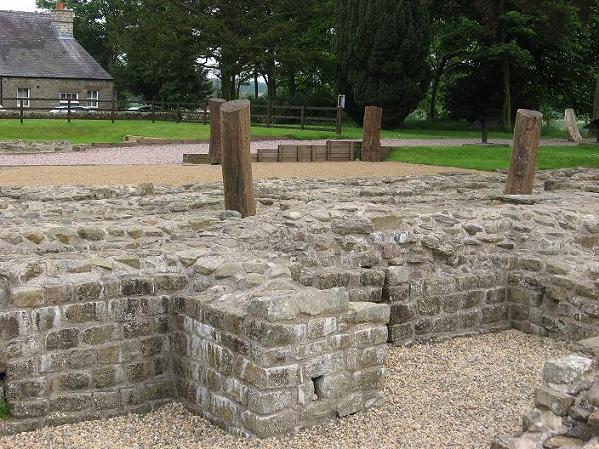 View from the other side, with the foundations of the second granary in the foreground
The style reminds of a Saxon long house, and according to the description and a drawing on site it looks like some sort of Meduseld. There are also some finds of Anglo-Saxon jewelry.

It would not be the first case where a local ruler saw the advantage of the Roman remains and the strategical situation of the place. The Norman keep in Cardiff is another example. What I'd like to know is whether the wall and trench fortifications at Birdoswald were still in maintained during the Dark Ages. Those times weren't exactly peaceful, after all.  ¶ February 23, 2010

Comments:
Thanks for the pics, Gabriele!

Hi Gabriele! Followed your comment from SF Novelists to here. I'll second Kathryn and say you have some lovely photos on your site.

Also, if I need to be in touch re: ancient history ('cos, y'know, reading about actual history is just soooooooo boring), I'll know where to come. Cathars in 25 words or less, that kinda thing. Sure you're up to it! ;)

The west gateway was still in use in the medieval period because there's a worn track through it, which implies that the walls were still significant obstacles, at least in that area of the fort, then and presumably at earlier periods too.

Thanks for the photos! I'll add a link.

Hi Kaz, thank you and welcome to my blog. Lol, I know that comment is tongue in cheek - what I really didn't get about the email I mentioned is why someone who doesn't like to read about history wants to write about it.
Cathars in 25 words? Have to think about that one. :)

Carla, yes, still having a gate implies that there were walls. Maybe even a fresh set of palisades; those were not foreign to the Anglo-Saxons, after all.

Those long halls go back pretty far; we have examples in Germany that predate the Roman 'invasion'. I'm pretty sure Arminius had one as well, and to call him Prince of the Cherusci (a title the Romans gave him) feels more wrong than to call him Thane, though the latter has maybe a too strong Anglo-Saxon connotation.

The most common version of those long houses included the stables because the cattle would add warmth in winter. Natural energies, though they come with a smell. :)
Do we know if any research about animals inside the Birdoswald house has been done? There's a method to measure the ammoniac in the ground.

'Thane' spelt like that is more Scots than Old English, so two problems for the price of one. Not that I have a better suggestion, mind. Do we have enough really early German to guess what vowels 'thegn' would have had in your period?

Meanwhile: Cathars in twenty-five words or less? How about...

24! Leaves out all the gory bits and weirdness, of course, and the entire political context for their support, but it's a start... Why yes, I do have to lecture on this in about ten days...

Jonathan,
I agree, Thane has all the wrong connotations. So far I've settled for 'sword leader' (Schwertführer) which is a bit of a made up title but would work in Germanic context. But that may change.

Any chance to read that lecture on your blog later?

I don't know of any research on animals in the Birdoswald halls, though there's no mention of drains in the flagstone floors and (as I understand it) the byre houses that housed animals at one end usually do have drains.

I have read that the byre houses found in North-west Europe, with the animals housed at one end, don't occur in Britain; instead you get a similar style of house but without the bit for the animals. The explanation I've usually seen for this is that the wet maritime climate is more temperate than in Continental Europe so there isn't as much need to house livestock indoors during the winter.

In the Borders area in the 15th and 16th century you get a building type called the bastle house, and one of those was found at Birdoswald just inside the west gate, again built on parts of Roman foundations (I think in that case it was parts of the exercise basilica and/or the rectangular building next to it, but I haven't looked it up so don't quote me). A bastle house is a two-storey house with the livestock downstairs and the living accommodation above. Some central heating off the cattle (especially effective in a two storey building as heat rises), and - probably more important in the days of the Reivers - some security for the cattle against rustlers.

'Sword leader' as a title sounds reasonable to me.

Great pics - hope the original posts were straighter than the ones placed there today though lol!

Carla, that makes sense about not needing to keep the cattle inside (and the drains as well). I wonder if the structure of the long house was used even without the cattle stalls simply because people knew how to build those. Foolproof model since before AD. :)

Most finds in Germany are houses that seemed to have had room for cattle, but I wonder if it was indeed the only type. Lack of finds doesn't say that much, esp. not in case of timber buildings. I'm pretty sure Arminius had more cattle than what would have fit into one house, so in my novel he has a hall and separate stables because he a) can afford some extra insualtion by the way of furs and tapestries, and b) needs to demonstate his position by being able to house a considerable number of guests. The same goes for some other leaders. I'm pretty sure there was a difference between your average freeborn man and a 'prince' (to use the Roman word) so maybe we just haven't found any 1st century AD German Meduseld yet. ;)

Gabriele, I doubt very much I'll have a text and I'm sure there must be better resources than whatever I'll produce out there about the Cathars. I'm not sure this is one, but it does make it clear that the whole thing still matters to people...

Thanks, Jonathan. I'm reading a novel about the Cathars right now, but I don't intend to write one, or do academic research about the topic, so I was looking for some easy to find but reliable information.