2 Aug 2010
The Kugelsburg - Part 2: Troubled Times
The Everstein family spread into several branches and some of its members appear in various positions and places in Germany for the next centuries. One Gertrude of Everstein was abbess of Gernrode in late 14th century, for example, and one Otto of Everstein-Polle was marshal of Westphalia acting on behalf of the archbishop of Cologne around the same time. But the prodigious offspring of Albert III seems to have led to increasing financial problems because of the need to split the possessions and provide dowries, and the loss of the main seat of Everstein probably increased those troubles.

At some point the Everstein must have pawned out part of the Kugelsburg to the archbishop of Cologne, because in 1303 Otto of Everstein renounced his rights to that part of the castle in favour of Cologne. That was something he could only do if his liegelord - Corvey - agreed. It could work out because Corvey itself had submitted to the protection of Cologne in 1298. 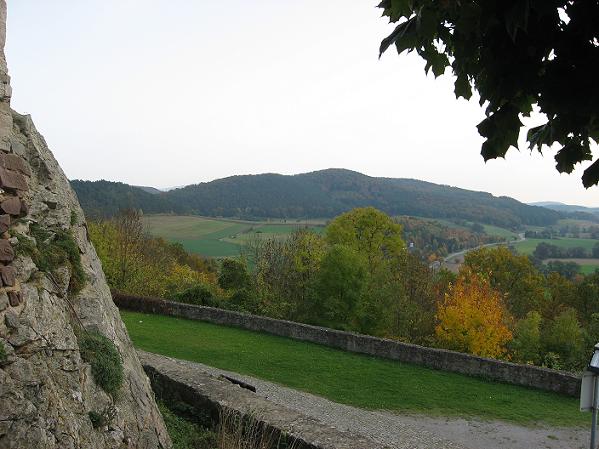 Archbishop Wigbold fortified the castle and had the round keep built. His successor archbishop Walram gave the Cologne part of the Kugelsburg as fief to his marshal Berthold of Büren, a member of the Everstein family in 1335, but in 1339 the same Walram gave the castle to the brothers Rabe von Papenheim; the family were hereditary stewards of Corvey since 1106. You see, the feudal connections remain complicated.

The Rabe family which soon called themselves Rabe von Cogelenburg lived in the castle from 1346 - 1530 as chatellains or Burgmannen, men of noble birth charged with the defense of a castle. They built the Gothic palas. Thus it must have been a member of that family who held the castle during the Hessian Brother War in the 15th century (see below). 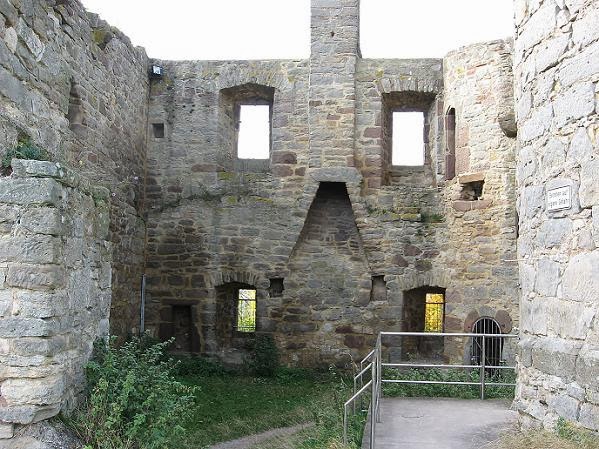 The main line of the Everstein family, the counts of Everstein, kept having troubles with the dukes of Braunschweig. When Hermann VII of Everstein had no male heirs, he decided to make and end and betrothed his daughter Elisabeth to Otto IV Duke of Braunschweig-Lüneburg in 1408. The marriage took place the same year despite the girl being only four years old. Herman VII Count of Everstein went into exile; the line died with him. 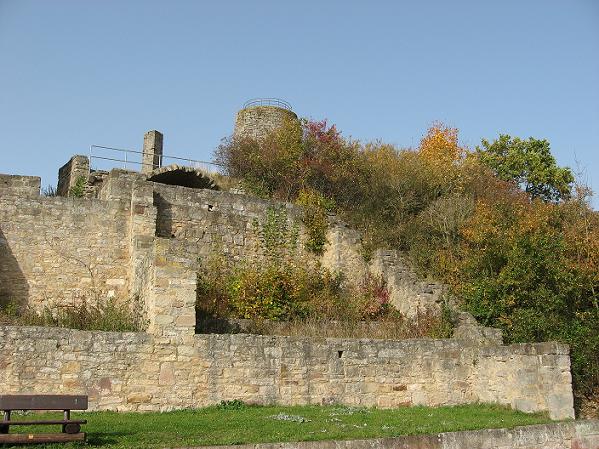 Outhouses attached to the inner curtain wall
Meanwhile, the Rabe of Cogelenburg sat in the castle without too many troubles until they got embroiled in the Hessian Brother War. When Ludwig I Landgrave of Hessia died in 1458, he left no detailed will though he had recommended that his older sons Ludwig II and Heinrich III should part the lands, with Lower Hessia (the area around Eschwege and Kassel; with Volkmarsen at its western border) going to Ludwig and Upper Hessia (the area around Marburg and the Lahn river) and the former county of Ziegenhain (in between those two parts) going to Heinrich. But the brothers could never agree about where exactly the border was to be and who held which rights, so open war broke out in 1469.

Heinrich sided with an old archenemy of the landgraves of Hessia, the archbishop of Mainz, one of the electorates. Mainz had possessions east of Hessia, among them the town of Erfurt, and therefore wanted to gain supremacy over the landgrave. The counts of Ziegenhain had asked Mainz for aid before, because the landgrave of Hessia didn't like to have an independent lord between his territories, either, and attacked them. The counts of Ziegenhain lost the war in 1437 and had to accept their lands as fief from Hessia. 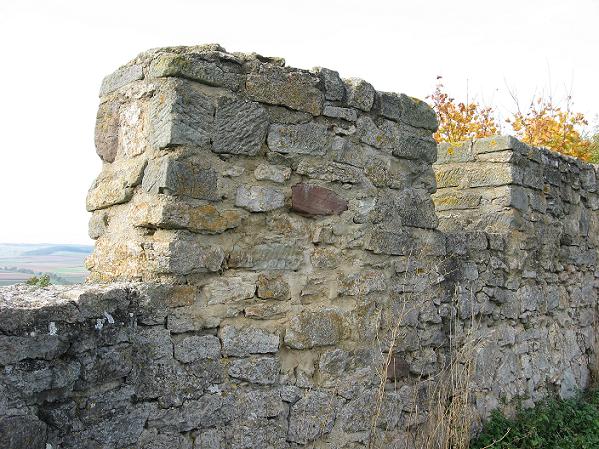 Merlons
When the last count died in 1450 without male offspring, landgrave Ludwig I considered the fief to have fallen back to him, but the Ziegenhain family thought otherwise. Heinrich had inherited an old quarrel, and a new alliance - to the Electorate of Mainz.

But it was Ludwig who had the greater military success, destroying several castles and villages in the process.

In the end, their third brother, Hermann Archbishop of Cologne, got them to the negotiation table and in 1470 they came to an agreement. But Ludwig died in 1471 and Heinrich acted as regent for his young sons, ruling over both Lower and Upper Hessia until his death in 1483. 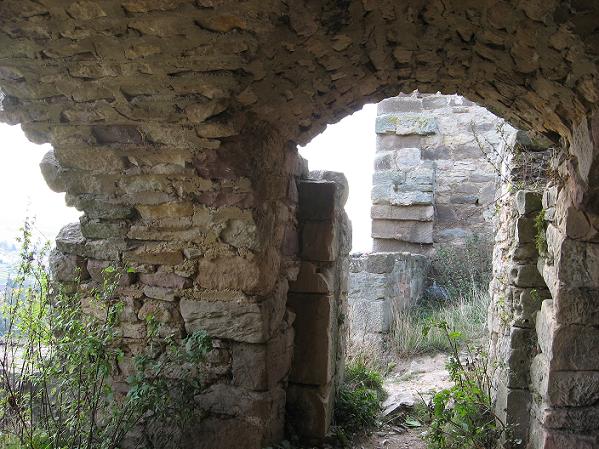 Kugelsburg, view from out of a cellar
It was after that war that the Kugelsburg comes into focus again. When archbishop Hermann gave the castle and the town of Volkmarsen to his brother Heinrich in 1474, both castle (which means the Burgmann, a Rabe of Cogelenburg) and town refused the oath of fealty to their new lord. It makes one wonder about the motives for that disobedience. Maybe they had faced an attack by Heinrich during the war that is not mentioned in the still existing chronicles (which don't need to be complete), maybe they were angry that Heinrich sided with Mainz which obviously had caused problems before.

They should have known better. Heinrich came back with an army and conquered the Kugelsburg in 1475. Why he waited until 1477 to deal with Volkmarsen as well I don't know; one possible explanation is that he tried negotiations first. But in the end he covered the town by missiles from the castle and when it fell, set it on fire. 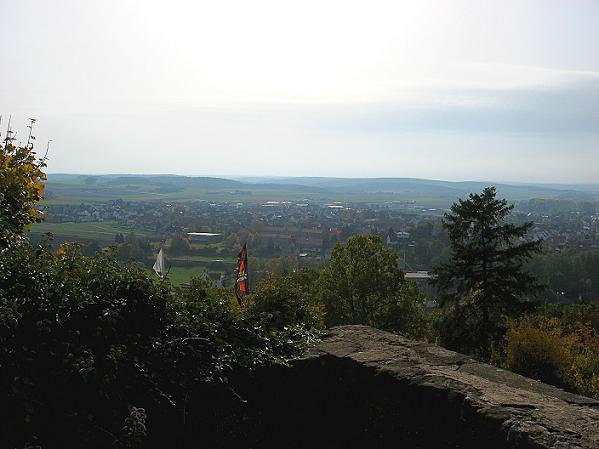 View from the outer bailey towards Volkmarsen
Archbishop Hermann renewed the rights of distraint from Hessia after Heinrich's death, and there was a Hessian garrison in the Kugelsburg until 1507. Since the Rabe of Cogelenburg sat in the castle until 1530, they must have made their peace with the landgrave and now commanded the Hessian garrison. Hessia was united under Wilhelm II, son of Ludwig, after Heinrich's son died rather young.

Comments:
Lovely view. Could see those engineers coming from miles away. :)

Hello greetings from England, thanks for the nice comments and I'm glad you like the Blog. Batavians are my favourites when It comes to Roman Auxiliary troops, I have just unbercoated some Batavians figures and drawn a picture of them for the Blog, so your timing is very good. Hopefully I will start painting them next week so you'll see some more Batavians quite soon.

Constance, that was the reason castles were built on hills. :P

Welcome to my blog, Secundus. I have a soft spot for the Batavians too, though I also like your Romans and Celts.

Lovely pics as always, Gabriele! And it's great to learn about these German noble families.

Thank you, Kathryn. The 15th century is past my time of interest beyond what I can find online easily, but the earlier times were interesting as well. When I'm done with the Romans, I may come up with a few posts about the Ottonian and Salian emperors.

Very complicated! Church and State seem rather intertwined in medieval Germany. Reminds me of the Prince-Bishops of Durham on a grand scale.

Carla, the Church not only held a lot of land (so did the English one until Henry VIII decided he'd like the land for himself) but was firmly integrated into the feudal system which means a lot of bishops, abbots and archbishops had vernacular powers and responsibilites as well. But their loyalty was always divided between the emperor (or some other feudal lord) and the pope.

The pope used the powerful position of the Church to get his hands into German politics. Canossa was only the beginning of that mess, and Luther not the end.