26 Mar 2011
Oil Lamps, Curse Tablets, and a Naughty Dwarf
I had promised a post about the finds in the Isis Temple in Mainz which are displayed in the room protecting the excavated foundations, so here we go.

Oil lamps must have played more or less the same role in the temples as votive candles in Christian churches. Some 300 have been found in the Isis temple, all with traces of soot that proves they were used. Most of them were found lying on top of places of burnt offerings where they obviously had been deposed after the ritual was finished. But oil lamps also served to illuminate the temple. 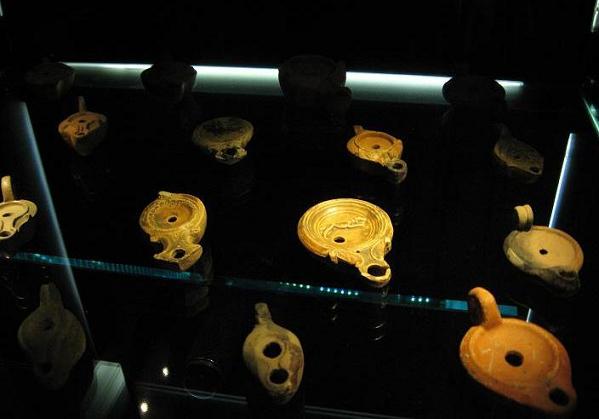 Whatever Prima Aemilia, lover of Narcissus, will attempt and will do, wrong shall it go for her. She shall never let anything blossom; she shall be out of her mind, and all she does shall be a lie. Whatever happens to her shall be wrong. This shall be the fate of Prima [lover] of Narcissus by this tablet [...] never bloom.

This is the translation of one of the 34 curse tablets found in the temple. Some girl who was after Narcissus herself wanted to get rid of a rival, it seems. Other such tablets curse people involved in embezzlements and other unsavoury practics. It wasn't exactly legal in the Roman Empire, and thus curse tablets are usually found in temples and gathering places of the mystery cults where such rituals could be conducted in secrecy. It is assumed that these curse rituals provided the priests and priestesses with some extra income. 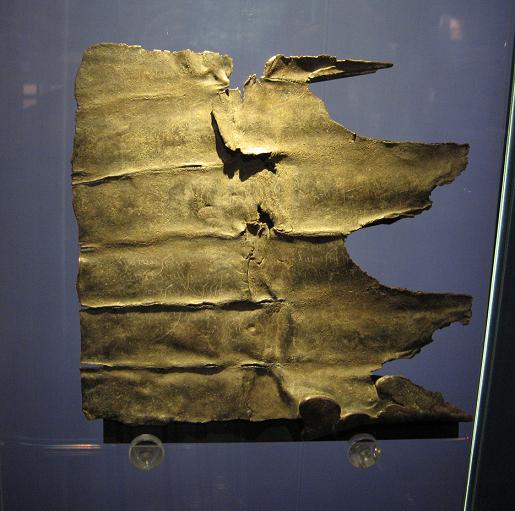 Curse tablet
The tablets, made of thin bronze in varying sizes from 3x5 to 10x20 cm, were usually folded (you can see the folding edges on the photo). One was found wrapped around a chicken bone; the only occurance of this magic variant outside Egypt. Only some of the texts are written in Vulgar Latin, the majority is in educated Latin with rhetorical embellishments; the script is the Latin majuscule. Isis figures most prominently on those tablets, but some of them address Magna Mater and/or her consort Attis. Another way to work magic included the use of clay figures (see below).

Two of those magic figures have been found, both crudely formed of clay and with stab holes on their body. They had been deposed in a well within the temple area. It is assumed that the voodoo-like holes had some magic purpose, but it was a love spell rather than a death one. Maybe they symbolized Armor's (or Cupido's, in Rome) arrows. Judging by a rather prominent feature on the lower body part one may guess what the caster of the magic really wanted. *grin* One of the figures came with a little bronze tablet to identify the recipient, one 'Tutmo son of Clitmo' (the names are Romanised Celtic).

(Right: Bronze figure of a dwarf; click to embiggen)

To the right is one of the most precious finds: a bronze figure of a male dwarf from the 1st century BC, which made it an antiquity already at the time it was placed in the temple. Makes you wonder why someone would sacrifice such a valuable item. The wreath on the dwarf's head is of copper and the nails of silver. The dwarf was probalby holding something on his left hand (maybe a plate with grapes, is my guess), and he was certainly enjoying the party very much. Reminded me of Tyrion Lannister. *grin*
(For those of you who haven't read the books, Tyrion is one of the main characters in George RR Martin's Fantasy series, A Song of Ice and Fire.) 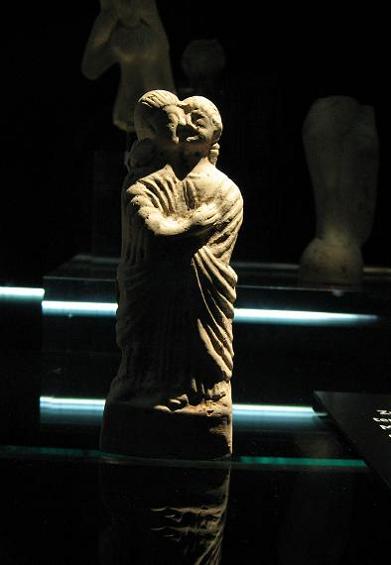 There are more clay and some bronze figures, often animals (in stead of the real ones), and oddly enough, other gods / goddesses like Venus or Merkur. Henotheism at its best.

I could only catch some of those with my camera because of that mystic light, or lack thereof. Some are worked with quite some details while others are more crude renderings, but they're all a better quality than the handmade magic figure above. Obviously, those clay figures were mass produced by professionals while the magic one needed the personal act of creation for the spell to work.

Embracing lovers are certainly a nicer way to set up a love spell than poking holes into some clay figure.

The figures of soldiers (see below) in old fashioned armour were dedicated to the goddess by the pausarii, members of the male temple staff who were organised in an association with a military structure. The etymology of the word is interesting, because a pausarius was the man who beat the time for the oarsmen on a galley. The nautic term may have originated in the Isis processions on the Nile. I could not find any information about female temple staff though I'm sure there must have priestesses for both Isis and Mater Magna - I'm in fact intrigued by the existance of an obviously significant male element. Maybe the priestesses and other women (servants etc.) were not organised the same way as the men. 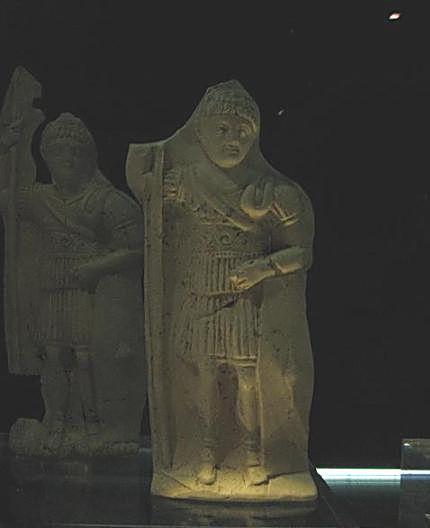 Figure of a soldier
A great number of small offerings has been found, coins, hair pins made of bone, miniature axes made of bronze, dices, and the above mentioned clay figures. Coins make sense, of course, but I would like to know more about the special significance of sacrificing hair pins (there's a whole bunch of those). 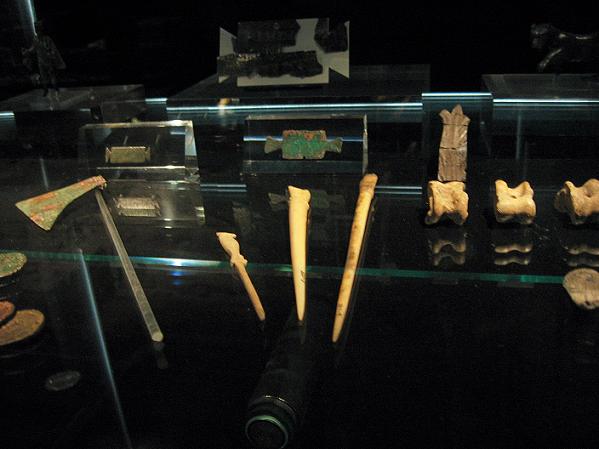 Assorted small finds
There are also fragments from the decoration of the temple, like shards of decorated tiles and painted bits from the walls, which are still researched and may teach us more about the look of the buildings. A book about all the finds is in planning but we'll have to wait a bit yet. 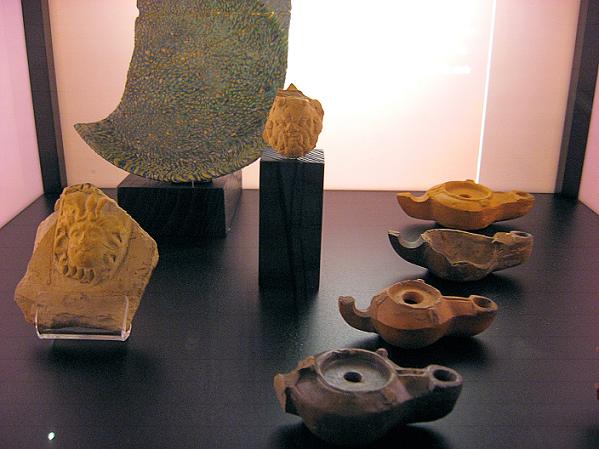 More small finds, among them Serapis heads from the decorative friezes
Other finds include the remains from burnt offerings which mostly have been found in trash pits. Among those are bones, especially of chickens, but other birds as well, burnt remains of bread and cakes, pits and seeds of fruits, remains of dates, figs and nuts, pine cones and chicken eggs. 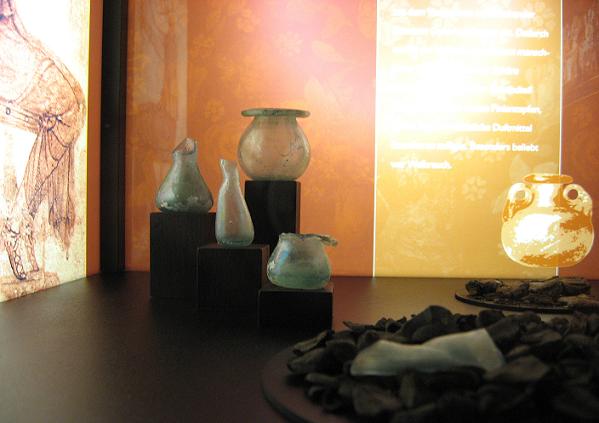 Glass wares
Another group of finds are tableware and dishes. Some of those were sacrificed, but other pieces had been used, probably for ritual meals in the temple. The glass flasks may have contained incenses or expensive oils and perfumes.   ¶ March 26, 2011

Comments:
I decided to play safe about the non PG13 photos because I know that there are mothers among my readers who have their kids look over their shoulder at the photos. So far this blog has been pretty safe for kids to look at and I want to keep it that way, without denying my adult readers some fun. Hope this works.

Kathryn, better don't such a thing it at home, though. :D

How very interesting - it's hard to single something out for mention, but the curse tablets are certainly amazing! I wonder what the curser would have thought if he/she had known we'd be looking at them all these years later...

Thank you for the site. Very enjoyable.

A thought on the deities. Dr. E.C. Krupp, archaeoastronomer as source.

Osiris was constellation Orion the Hunter. Apis the Bull was Taurus the Bull. Usir-Apis or Serapis was the combined version of Orion and Taurus constellations during the Ptolmaic dynasty. The plural was Seraphim.

Syncretic religions might have been adopting the various names given to the same constellations by different cultures and languages.