18 Jun 2011
Baiting Bears and Torturing Martyrs - The Amphitheatre in Birten / Xanten
The first legionary fort on the Fürstenberg hill near Xanten, known as Castra Vetera I, goes back to at least 12 BC when Drusus started his campaigns into Germania. Digs during the first third of the 20th century have shown a number of at least five forts that were built partly over each other, so that most traces of the older ones have been obscured. Moreover, the first forts had been constructed in half-timbered style with earth or timber/earth walls. Aerial surveys in the last years have rendered more traces of those. But the best-researched is the fort from Nero's time that later got destroyed during the Batavian rebellion in AD 70. 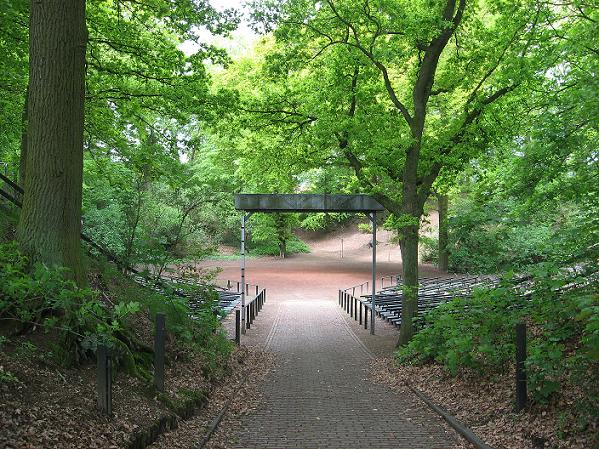 After the war, the fort was rebuilt nearby as Vetera II, in a space now under the waters of the shifting Rhine. The various version of Vetera I lie under agricultural fields these days.

Vetera I had been a fort for two legions since the time of Germanicus (AD 14) if not earlier. As such it attracted a cannabae legionis, but those civilian settlements have left even fewer traces and were never really researched, though aerial surveys show a regular Roman street pattern outside the Neronic fort, so one can conclude that the the place became a Roman-planned settlement at some point. There also seems to have been a 100 metres 'safety distance' between fort and settlement. 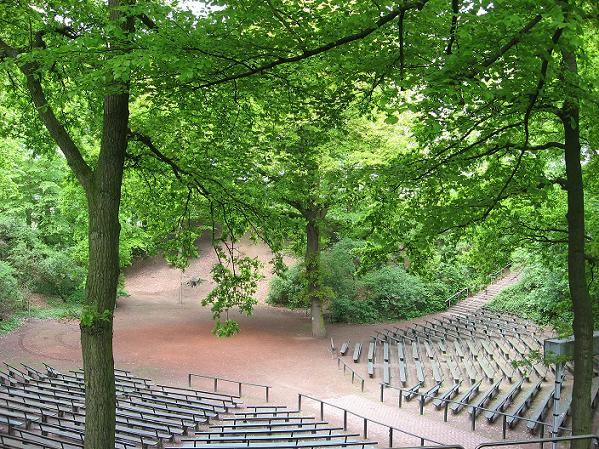 View from above the spectator rows
The cannabae were destroyed during the Batavian rebellion as well, and when the fort was moved, a new settlement - later to become Colonia Ulpia Traiana - was created in the place that now hosts the Archaeological Park. The only remains of the old cannabae today is an amphitheatre in the village of Birten.

When we think of amphitheatres today, we have an image of the often stunning stone buildings that are spread all over the Roman Empire. But they started out much smaller: For a long time, the arenas for gladitorial combat were timber structures that would be dismantled again after the performances. But some of those collapsed and killed people, so during the time of Caesar, the specatator rows more and more often were erected on firm ground, using natural slopes or earth and timber walls (like Augustean fortifications), and eventually developed into stone buildings which also allowed for much larger constructions. 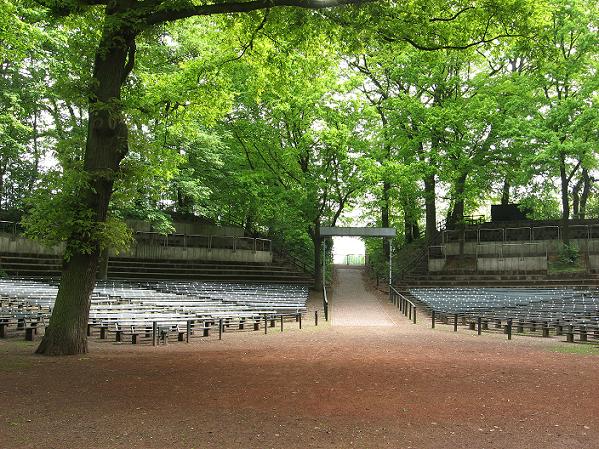 View from the arena to the entrance
Leginonaries got grumpy when they couldn't watcht the occasional gladiator fight or bear baiting (bear bones have been found in Birten), so it's no surprise that a large fort like Vetera would eventually get its own amphitheatre. It's an oval earthern structure of 98 x 84 metres; the arena proper measures 55.5 x 42.5 metres. The walls had originally been 8 metres high, and the theatre could hold 10.000 spectators. The seats once had been of wood, but now there are modern chairs on one side of the arena because the theatre is used for concerts and play performances today. It's a pretty place, surrounded by trees and deceivingly peaceful, considering its violent past. 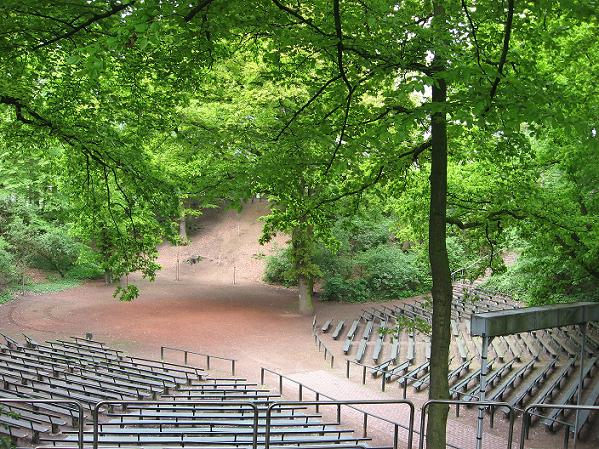 Another view from above
A reason the amphitheatre survived is its connection with the martyr St.Victor who is said to have been executed in the arena. Victor was a member of the Theban legion of legends and Christian historiography. It is said to have been a 3rd century legion entirely converting to Christian faith, which got decimated several times on the march through the Alpes, France and along the Rhine. Victor and some 300 of his men were the last ones to end that way - well, Xanten was the last place to kill them before they would have reached the sea. The legion became the collection bin for pretty much every saint along the way, most prominently among them St.Maurice (aka St.Mark). 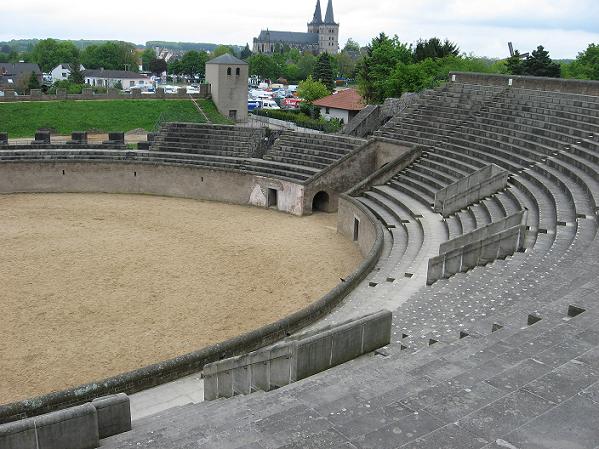 The reconstructed amphitheatre in the APX Xanten
I don't know why the connection was made between Victor and Birten in the Middle Ages; if he was indeed member of a Roman legion and executed for his faith somewhere near Xanten, the stone amphitheatre in the Colonia Ulpia Traiana would have been a more likely place. It was still in use at the time of Constantin the Great († AD 337), while Victor's martydom took place somewhat earlier. One explanatiion could be the fact that the veneration of St.Victor can be traced clearly only to the 8th century, and by then a transfer of the legend to the amphitheatre in Birten would be possible.

Comments:
Great pics and post. And with yet another example of the medieval practice of adopt-a-Saint!

I first read 'cannabae legionis' as 'cannibal legion' and then as 'cannabis legion', hehe. :-)

Saints were tourist attractions back then, so it's no wonder every town tried to get something; bones, a legend, whatever. :)

Lol, Kathryn, cannabis legion - myabe that was the true reason the Theban legion got decimated; the guys were high and didn't keep formation. :D

I must confess I knew nothing of St Victor, so thanks for the insight. Wonderful to think this amphiteatre is still used today.

Love the views. Gives a good idea of what it was like. Hard to believe the amphitheaters held so many people.

Anerje, there are too many saints around. Probably takes someone who actually listened during religion lessons to sort them out. :)

Constance, the walls had been higher in Roman times.

Yes, if St Victor hit the big time in the 8th century, possibly anything suitably 'Roman'-looking in approximately the right area could have become a location for the story. Is it known whether the Birten amphitheatre would have been visible at the time?

Some of it may have been still visible, but a 15-20 minutes bicycle ride away are the remains of the stone amphitheatre of the Colonia Ulpia Traiana, which must have been a much more impressive structure, even partly dismatled as it might have been at a time when churches were been built of stone. I wonder why not those got picked. Present day (and Mediaeval) Xanten lies more or less in between both amphitheatres.

Curious. Stone structures in a poor state of repair can be dangerous places, and it might be not so good an idea to direct pilgrims to such a site and risk an accident that might be a bad advert. Or if the stone remains were being used as an active quarry for building materials, the owner might not have wanted the site to be frequented by pilgrims, who would get in the way (and might even object to dismantling a sacred site...). Or maybe the Birten amphitheatre was conveniently near a local church or monastery with a shrine to St Victor, so pilgrims to the shrine could be easily taken there on a guided tour.

Is it possible that the same name could have been used interchangeably for both amphitheatres, or used for one and then transferred to the other?

Carla, there was a chapel, but it was located where today the cathedral stands, that is, slightly closer to the amphitheatre of the Colonia Ulpia Traiana than Vetera/Birten. The oldest document we have is Gregor of Tours' Liber in gloria Martyrum (AD 590) where he mentions a cella memoria near a place called Bertuna. But the problem is that this little chapel was erected in honour of St.Mallosus, while St.Victor only gets a footnote, 'his bones are said to be somewhere, too'. So, if Bertuna is Birten (and it is an old spelling of the name), we got the wrong saint - albeit Mallosus got shoved into the Theban legion at some point, like anyone else. Another interpretation is to read Bertuna as 'Verdun' in France, where Mallosus is indeed venerated as Saint Maur until today.

Another version is the legend that Helena, the mother of Constantine the Great (who did spend considerable time in Germany), had found Victor's remains in the swamps where his body had been thrown after the execution, and built a chapel there. Swamps would indeed point at the surroundings of Birten rather than the other side of Fürstenberg hill, where the colonia with the stone amphitheatre stood.

No remains of a chapel have been found in Birten, but there are several cellae memoria in the Roman cemetary outside the former colonia where the Medieaval town developed, and it may have been developing there instead of on the remains of the Roman town, like in most other cases, because there was a chapel dedicated to a saint. The oldest of these dates to the 4th century AD and was extended into a double-grave chapel in the 6th century (which fits with the time of Gregor of Tours). One theory is that the chapel originally was erected for St.Mallosus and then expanded when St.Victor's bones had been found as well. But if this is Helena's chapel, things get complicated again. (The problem is that you can find plenty of bones around a place that first was attacked by Civilis' rebellious Batavians in AD 70 and then again several times durng the 3rd and 4th century by the Franks - personally I'm not sure they ever got Victor's if he was indeed put to death in Birten or Xanten).

We know that St.Victor was venerated in Xanten already before 863 when his - alleged - remains were brought to Cologne for some time, to save them from the Vikings. At that time he seems to have replaced Mallosus, in case that saint ever played a role in Xanten. The old name Ad Sanctos is an argument in favour of two saints.

Thanks for the detailed reply! Two saints does look like a distinct possibility.