3 Jul 2011
Bearded Seals
Only a little intermediate post today. Sort of fits the weather, though. We got our summer in April and now it's autumn, at least on the temperature and rain scale.

So let's visit the bearded seals in the Polaria in Tromsø, a mix of aquarium, museum, and research centre. Polaria was established in 1997, in order to make people acquainted with the Arctic flora and fauna, and environmental problems. It is part of the Polar Environment Centre, an institution which includes a number of research bodies, among them the Norwegian Polar Institute. 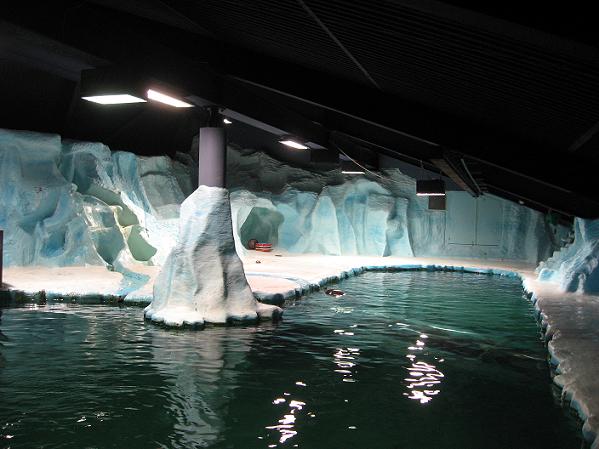 The seal swimming pool in the Polaria

Seals are cute, and that's reason enough to post some photos. Unfortunately, they were the only ones I could catch with my camera. There's a big aquarium with a walkthrough tunnel and all, but it's impossible to get pics through the glass. Arctic waters are no sunlit coral reefs, but amazingly full of life nevertheless.

At the time I visted Polaria, there were six seals, but not all of them full grown. They get fed twice a day, but the little tricks they have to perform are not so much for the vistors but to mentally stimulate the seals which are quite intelligent animals. 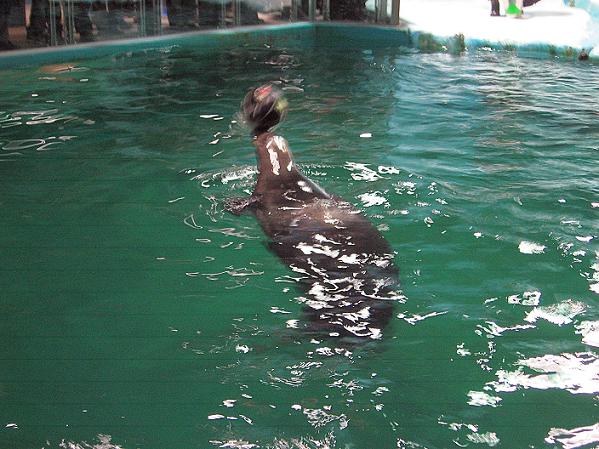 No wonder they are the favourite dinner of polar bears. Seals are also a main food stock of the Inuit who not only use their meat and blubber, but the rest of the animal as well. The traditional Umiak boats are covered with seal skin, for example.

Both sexes are the same size. Other distinguishing features of bearded seals are the square fore flippers and the thick bristles on the muzzle. 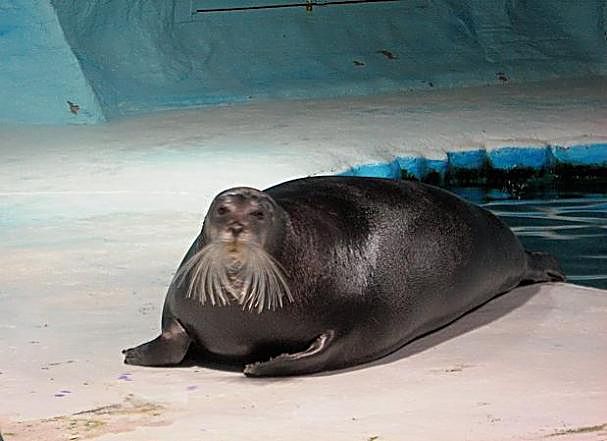 That's why we're called Bearded Seals
Bearded seals feed on small prey found on the ocean ground, like clams, squids, and fish. That's where those whiskers come handy; they serve as feelers in the soft bottom sediments. Bearded seals prefer the shallower coastal areas and seldom dive deeper than 300 metres (980 ft) though they have been spotted at 450 metres (1480 ft) on occasion. Esp. the younger ones are more adventurous.

Pups are born on drifting floes in shallow water in spring (late April / May). They weigh 30-40 kg and they grow. Fast. About 3 kg a day. It takes about 8 litres of mommy's milk every day during the 18-24 days mom feeds the pup. You have to hurry things up in the short Arctic summer. Baby seals also get into the water a few hours after they've been born, and soon become good divers. 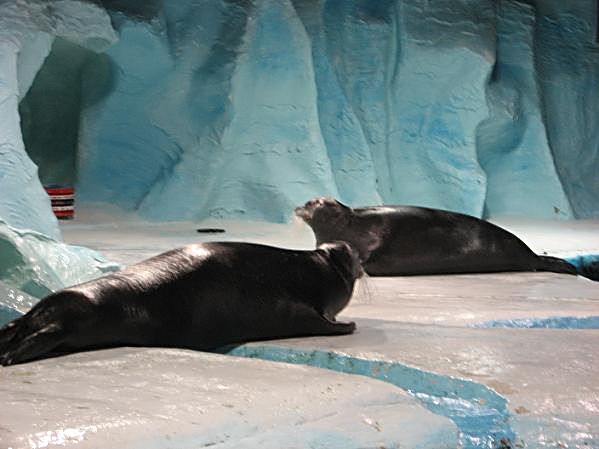 Lazing out on fake ice in a polar bear-free zone
The mother will stay with the pup and protect it for some time after it is weaned, but a new mating cycle takes place immediately. The bearded seals - like many Arctic mammals - have a delayed implantation; that means, the embryo will only start to develop a few months after the egg has been fertilised. Thus the gestation period is 11 months but the active part only 9 months.

Males are territoriall. When they want to proclaim their territory or attract a female, they emit a long, warbling note ending in a sort of moan; their 'song'.   ¶ July 03, 2011

Comments:
They are completely irresistible! I'm glad you posted the pics.

All that's missing is a fat cigar for the one with the full on beard.

Can see him sitting on a rocking chair, puffing away and talking about the old days.

Vicky, they were totally cute indeed.

Paul, and a pint of beer.

You get to see the most interesting things!

I agree with Paul.. with a cigar in a rocking chair, the bearded seal would have looked really good. :)

Great pictures! I don't think I've seen bearded seals before. Do they all have the magnificent whiskers, or only the males of a certain age?

They're completely fantastic! Love them!

Summer briefly returned here yesterday, but otherwise yes, it might as well be autumn...

aw, they are adorable!

Constance, that's why I spend way too much money on traveling. :)

Laurence, too bad I can't draw worth crap; this is an image that should be painted.

Carla, bearded seals are all for gender equality; the girls got whiskers, too. They are tactile organs and needed to find food, not just decoration.

Kathryn and Anerje, thank you.

Now THAT is a tasty treat!