2 Oct 2011
Two Castles in One - The Brandenburg in Thuringia
I've been making the best of the current Indian Summer while it lasts and used the little spare time to visit some more interesting places. One of the castles I visited together with my father gave me an abundance of photos but not so much information about its history. Brandenburg Castle in Thuringia must have been a large and well fortified place once - its remains are still impressive - but it never played a significant role in history. 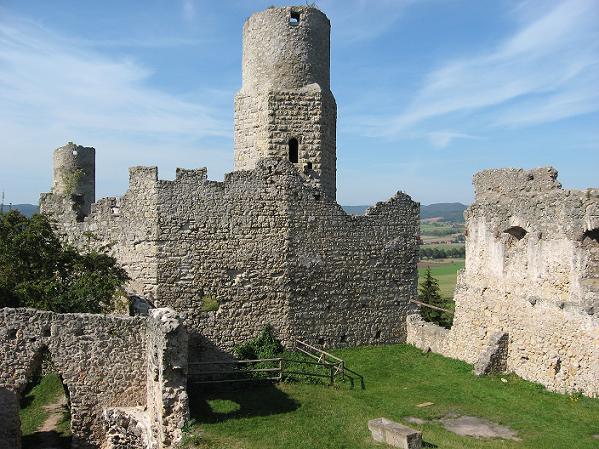 View from the eastern keep: East gate (left) with gate house and cistern, remains of the palas (right),
inner curtain wall of the East Castle with the Hexagon Tower in the background
The castle is situated on a mountain at the foothills of the Thuringian Forest, guarding a ford across the Werra river and the road from Hersfeld to Eisenach, one of the important roads in the Middle Ages. The Brandenburg is a double castle which means it consists of two separate castles, one - the Westburg - sitting on a promontory, and the other - the Ostburg (East Castle) - on the peak itself; both are separated by a natural trench and have their own sets of curtain walls, towers and gates. Another gate with fortifications may have been at the foot of the hill, there are some worked stones lying around, and traces of an artificial trench. The other side of the hill facing the Werra river is steeper and didn't require additional fortifications. 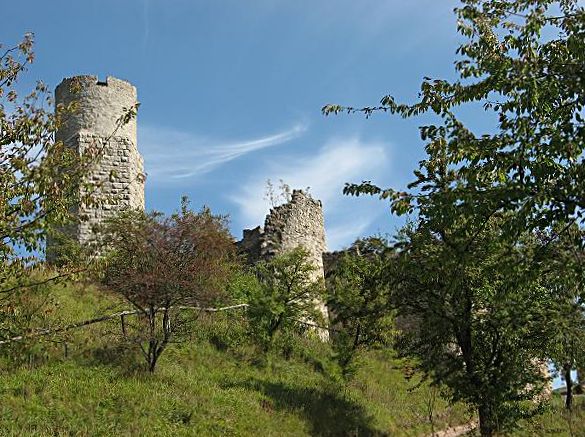 Hexagon Tower and curtain wall of the East Castle
One can easily imagine that a double castle like this is more difficult to conquer. It takes a larger army to lay siege to it, there are more walls where the defenders can pour and throw down all sort of interesting things, and if you manage to conquer one castle, there's still another one left. As far as I know, the Brandenburg was never besieged.

For a long time the castle had been a veritable seat of the Sleeping Beauty with trees growing in its yards and vines covering the tumbling walls. During the time of the German separation, the Brandenburg was in the so-called Sperrzone, an area along the East German border that was forbidden for everyone; even the people living in the villages in that zone needed special permits to get in an out - only in East Germany, of course, from the west you could always get as far as the first fence. Thus the castle was abandoned for 40 years, left to the trees and the birds. 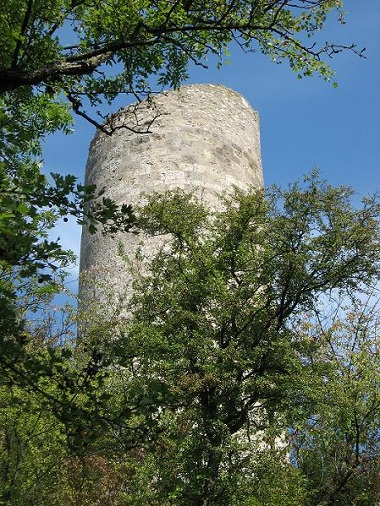 The keep of the West Castle

One could always see the towers from afar. Nearby Herleshausen was one of the places where you could cross the border into East Germany (which we never did). 20 years after the reunion only a road sign remains where once were fences and mine fields, and the Brandenburg is accessible for visitors.

We had sometimes been hiking in the area before the family moved to Göttingen, often seeing the death zone and watch towers, but this time we could not for sure remember where exactly the border ran so well has it been ereased. After 20 years, a whole generation has grown up without the sight of those fences and forbidden zones, or the attempt to make one of the GDR soldiers in the towers wave back (I remember one did once, shyly and cautiously when his colleague was looking the other direction; it was a dangerous thing to do for them). 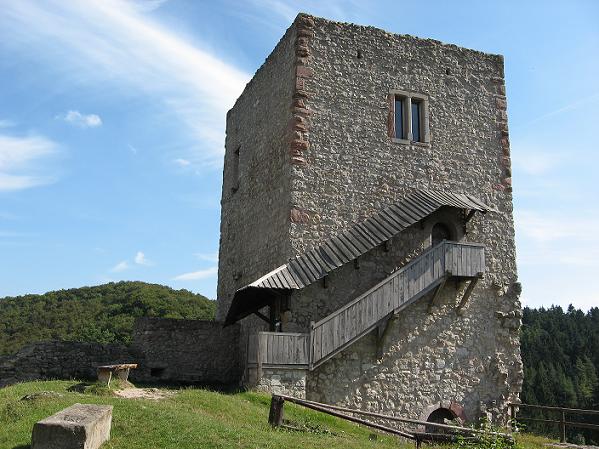 Main keep of the East Castle
The village at the foot of the castle, Lauchröden, is first mentioned in a charte dating to 1019, and in 1144, one Wigger of Wartberg and his brother Gottfried are mentioned as protectors and reeves of said village and its church. Wigger is called comes - count. He held the position of châtelain or burgrave of the nearby Wartburg, seat of the Landgraves of Thuringia, since at least 1138. Because of the family's interests in Lauchröden, it is assumed that they built the first Brandenburg castle, the Westburg around 1140. 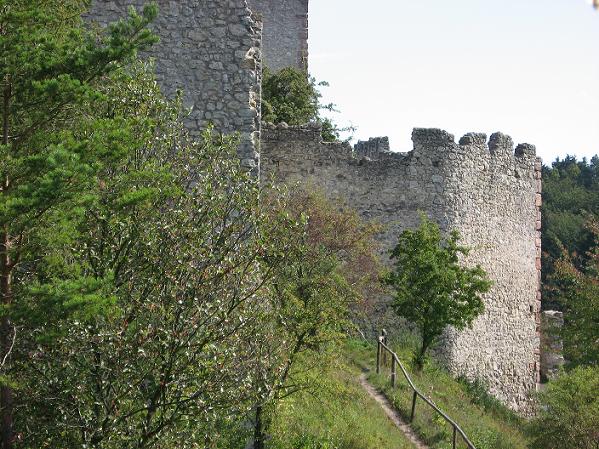 View from the West Castle to the East Castle (zoomed in)
A few years later, Wigger of Wartberg held possessions along the Werra, around Eisenach and Gotha in Thuringia, and in Hessia (near Kassel). The family certainly was on the rise. His son Burchardt followed his father as burgrave of the Wartburg.

The East Castle likely was built about 1170, but it took until 1224 for the family to take their name after their main seat and not their hereditary position as châtelains at the court of the landgraves of Thuringia: the 'von Wartberg' became 'von Brandenberg'. 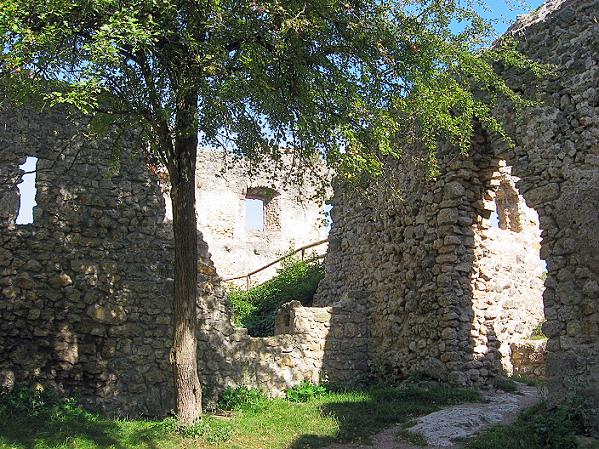 Eastern main gate and cistern, with the palas in the background
I could only find glimpses of the Wartbeg / Brandenberg family in the sources, despite the fact they still were châtelains of the Wartburg and their life often connected with the fate of the landgraves of Thuringia. Count Ludwig I of Wartberg participated in the crusade 1197/98 together with Landgrave Hermann I, but contrary to his lord who died of a fever, Ludwig survived. His successor Ludwig II shared the fate of Landgrave Ludwig IV, they both died during the crusade in 1227, and the position of the burgraves of the Wartbug discontinued. Ludwig's cousin Burchard of Brandenberg survived and returned home. 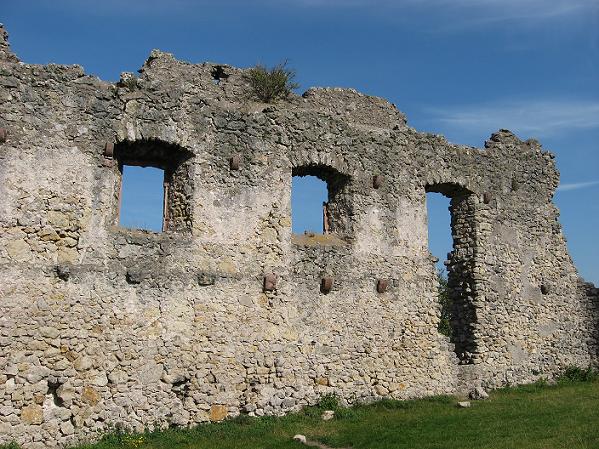 Remains of the palas of the East Castle
But the family got in financial troubles, like other nobles of their time. They were obliged to keep up a certain lifestyle, represent, donate land and money to churches and sub-vassals and other expensive habits, and not every family had the income to back this up. In 1280, Albert II of Brandenberg sold Brandenburg Castle to Landgrave Albrecht. He rremained the landgrave's counselor, but with their main possession lost, the family also lost the title of 'count' and became mere ministeriales again (a status from which they had risen with Wigger 150 years before). The last time the family Brandenberg is mentioned dates to 1435; they probably died out soon thereafter.

Albrecht II of Thuringia (nicknamed 'the Degenerate') gave the Brandenburg to his son Apitz in 1290 who spent some time in the castle. 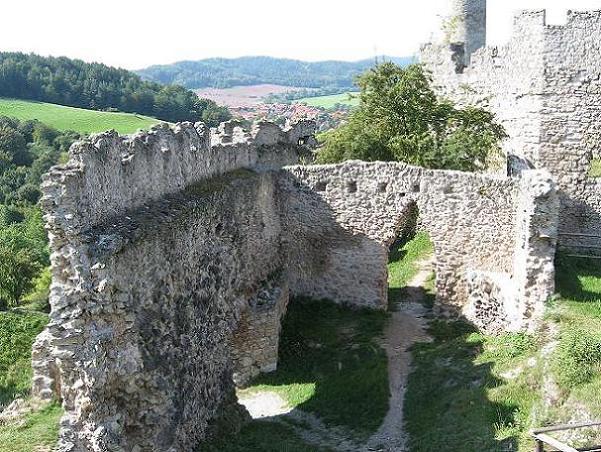 Outer and inner gate of the East Castle with curtain wall in the background, seen from the keep
The last time both castles were held by the same family was 1322 - 1359 when the lords of Heringen took them as fief from the landgraves of Thuringia.

After that time, the East Castle changed hands several times until the lords Herda zu Brandenburg held it from 1415 - 1892, after which the line died out and the castle fell back to the Great Duke of Saxe-Weimar-Eisenach (no, I didn't make that title up). He forbade further dismantling of the castle and instead had it somewhat restored.

The Brandenburg became a tourist attractions in the early 20th century. Picturesque castle ruins were pretty popular then. 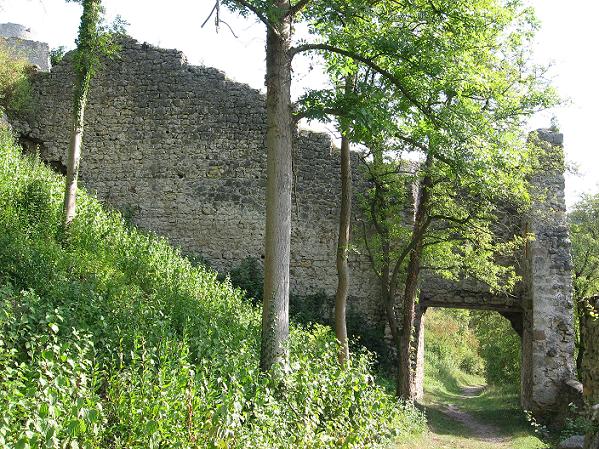 Main gate of the West Castle, seen from the bailey
The West Castle came into possession of the Reckrodt family (1440 - 1720). One of their members, Georg of Reckrodt, was a famous mercenary leader in the 16th century. He died on the Brandenburg in 1559. After that time, both castles were no longer inhabited, and were soon used as quarries to build a modern palace in Lauchröden (a fate the Brandenburg shared with most Roman remains and other castles).

The West Castle changed possession a few more times until 1936 when the last owner sold it to the County of Thuringia. He probably didn't want to pay for the upkeep of some uninhabitable ruins; that can get rather expensive. 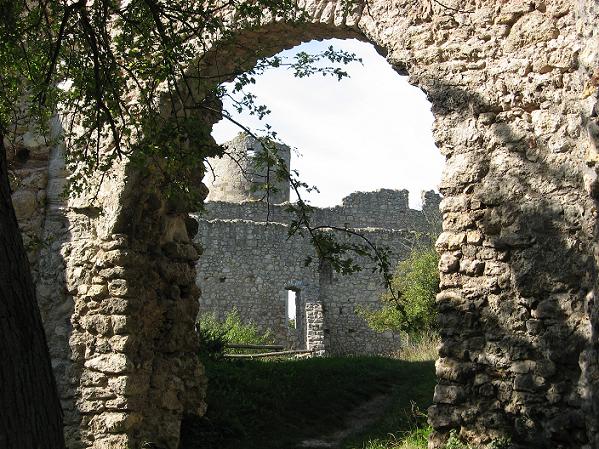 View from the gate into the east bailey
After the sleeping beauty was woken again in 1989, it needed some thorough restoration to make the place safe for visitors. Between 1990 - 1994 the keep and gate of the West Castle were partially restored, as well as the keep of the East Castle which houses a little museum (which was alas, closed). Some steps and rails were added to make access easier though it's still a bit of a climb to reach both castles.

The Brandenburg is cared for by the Thuringian Castles and Gardens Foundation. Here's another post about the castle.

Comments:
Yes, there seems to be some freak weather about! Certainly time to make the most of castle visiting - splendid pix once again!

Fantastic place! And great that you made the most of the stunning weather, Gabriele - it's certainly over now. :-(

Thank you, Anerje and Kathryn.

And Stag haz google-fu again. :) There is a German website, but it's not much more encompassing than this one.