1 Feb 2015
Chepstow Castle, Part 1: Beginnings unto Bigod
Chepstow Castle is one of the first generation Norman castles in Wales, built in the wake of William the Conqueror's conquest of England and what parts of Wales and Scotland he could snatch. The Welsh didn't like being snatched, though, and thus William had to erect a number of castles in the borderlands, the Marches, as defense as well as base for further conquests.

Throughout the Middle Ages, Chepstow was the administrative centre of the Marcher lordship of Striguil. During those years, the castle had been expanded and altered, but the first keep, the Great Hall, still stands. 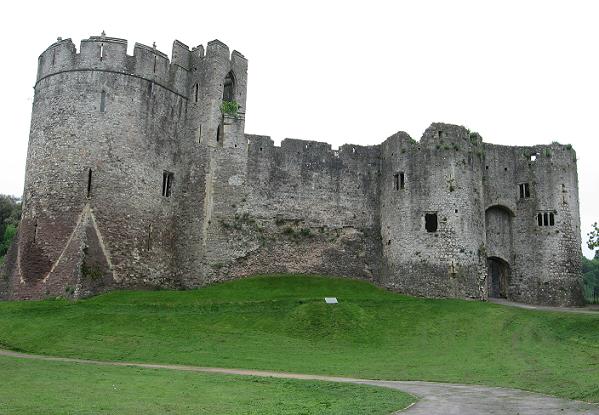 Outer Gatehouse and Marten's Tower (to the left)

King William gave the task of organising the border defenses to William FitzOsbern lord of Breteuil, his childhood, friend, later his steward and his chief military strategist. FitzOsbern also led men of his own at the conquest.

Like most of the noblemen in William's entourage, FitzOsbern got lands in England and the title of Earl of Hereford; tasked with the defense of the border to Wales. In 1067, he started the construction of Chepstow Castle, situated on a limestone cliff above the river Wye. 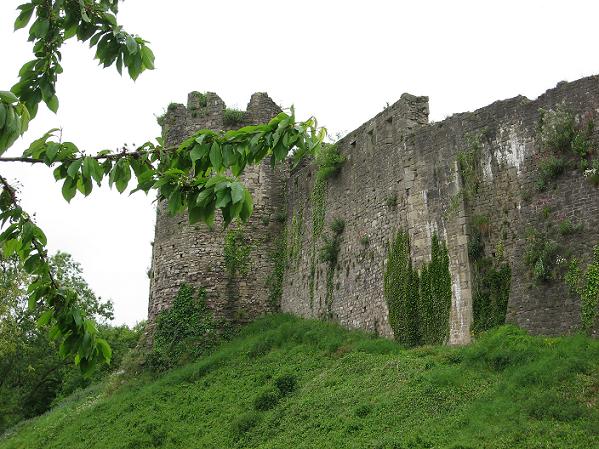 Southern curtain wall with one of the round towers
FitzOsbern surely built the first defenses on the hill, but whether the Great Hall can be ascribed to him has been recently disputed. He died in battle in 1071, and Chepstow was not the only, nor the most major castle, in his possession. Moreover, the interior of the hall does not show a pattern typical for the living quarters of a lord; it is a more representative room.

FitzOsbern's son, Roger of Breteuil, rebelled against King William and was imprisoned (1075) and his lands forfeited. So the possible commissoner of the great hall can well have been King William - it follows the pattern of other representative halls or audience chambers he used for crown wearing ceremonies and such. He may have planned to stage submission ceremonies of Welsh lords there. William visited Chepstow Castle in 1081, but no grand events are recorded. 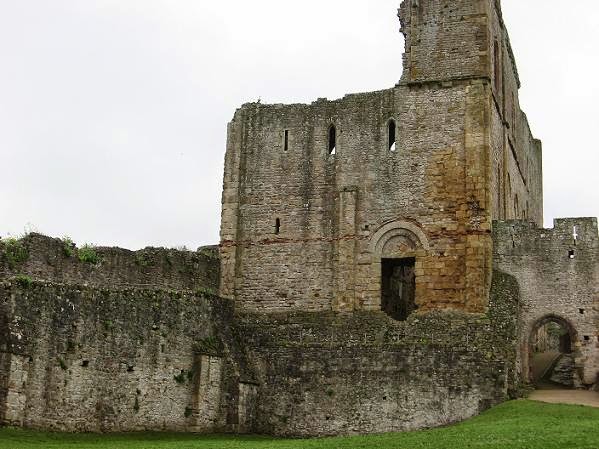 Chepstow Castle, the Great Hall
The hill between the Wye to the north and the steep slopes of the Dell valley to the south is about a hundred metres long and 20 metres wide; space enough for a big Norman whopper castle. Chepstow does not follow the typical Norman motte and bailey-style - like for example Cardiff - but makes use of the natural features of the hill. The first castle only occupied part of the plateau.

In building the great hall, the masons used some Roman stones, probably taken from the ruins of nearby Caerwent. 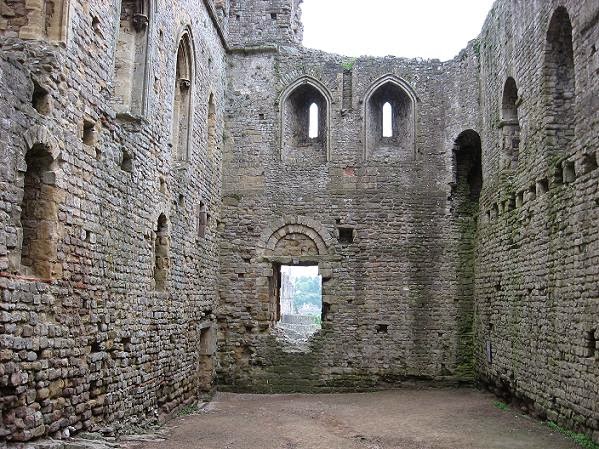 Interior of the Great Hall
Chepstow remained in possession of the royal family until Henry I gave it to Walter fitzRichard of Clare in 1115. Walter and his successors did not make any significant additions to the castle, but Walter founded nearby Tintern Abbey. The best known of the name is Earl Richard 'Strongbow', conquerer of the Irish province of Leinster († 1176). He left behind a son † (1185) and a daughter with his Irish wife Aiofe. The daughter, Isabel de Clare was a ward of King Henry II until he gave her - and the vast de Clare estates in Wales and Ireland - in marriage to William Marshal in 1189. You can find more information about this remarkable man who started out as knight of fortune and ended up as one of the most powerful magnates of the kingdom in the blog of Elisabeth Chadwick. 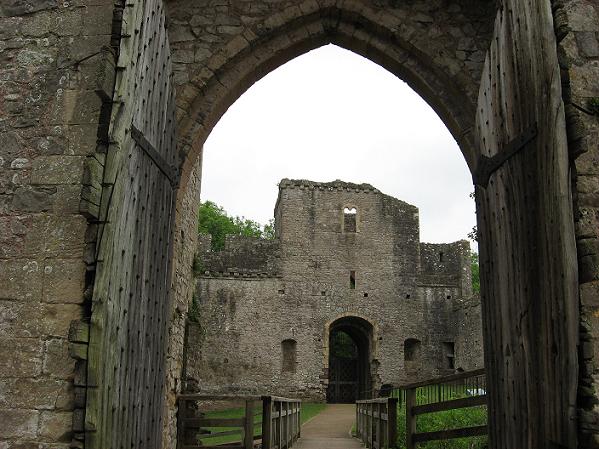 Upper Gatehouse at the west barbican with view to William Marshal's private quarters
William brought the outmoded 11th century castle up to date. He had the money and the experience to make Chepstow a formidable fortress. William had seen new features, esp. the round towers that were to replace the former square design in France and during his pilgrimage to Jerusalem. Those would soon become fashion in English castles

William rebuilt the east and south walls as proper curtain walls, and added a gatehouse (1) with two round towers projecting outwards (see photo above). Those had arrow slits from where the defenders could cover the area directly in front of the wall. A second line of defenses was added between the lower and middle bailey, again with round towers. In a last step, the curtain wall of the upper bailey was heightened and William constructed a square tower for himself and his family to live in. Since it was located in the uppermost corner of the castle, it would have provided some privacy. The middle bailey
William died in 1219 and was succeeded by his five sons in turn. His sons further improved the defenses and also the comfort of the interior lodgings. There is proof for several grants of 'good oak' by the king; those timbers would have been used to refine the interior of buildings (addition of walls and floors, for example). One of the more striking featues were the two elaborate arches dividing the hall in the great tower into a - somewhat smaller - hall and a more private chamber that could be used for more intimate meetings with trusted advisors. They also added another floor to the tower which was used as bedchamber. 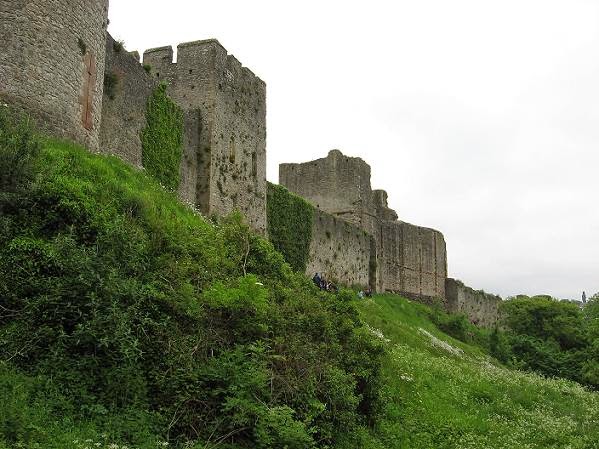 Southern curtain wall seen from the Dell valley; from left to right:
southwest tower of the upper barbican, Marshal's Tower, Great Tower, a round tower of the middle bailey
King Henry III visited Chepstow several times. The second Marshal son, Richard, quarreled with Henry III, but withdrew to Ireland where he was killed in 1234. The third son, Gilbert, reconciled with the king. He added the southwest tower to the upper barbican. He died in a tournament in 1241.

William Marshal's last son, Anselme, died in 1245, and the estates were divided among the surviving five daughters or their heirs. Chepstow fell to Maud, the eldest, who had married Hugh Bigod (there is an essay by Elizabeth Chadwick here). Their eldest son was Roger Bigod Earl of Norfolk, who after Maud's death inherited Chepstow. He liked the place as hunting ground, but it would fall upon his nephew and heir, another Roger Earl of Norfolk (1245-1306; he inherited Chepstow in 1270), to bring the castle to its greatest splendour. 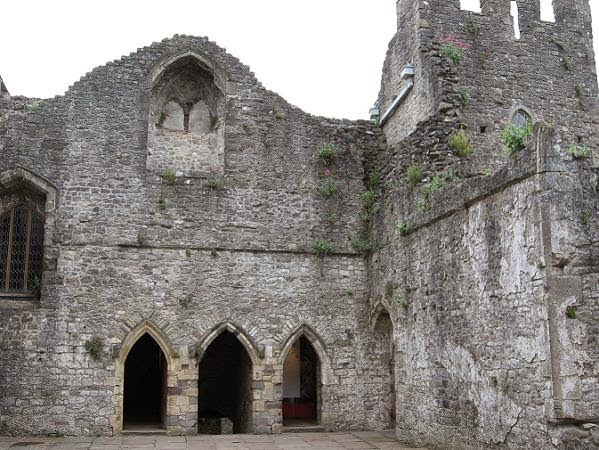 Bigod's Hall, interior
Roger Bigod II held the title of earl of Norfolk and the position of Earl Mashal for more than thirty years (1270-1306), a timespan that fell into the reign of King Edward I. At first, Roger Bigod and the king got along well; Roger raised an army to fight for the king in the Welsh wars 1276-77 and 1282-83 where Edward subdued Llywelyn ap Gruffudd of Gwynedd; and in 1287 he led the king's armies in Scotland.

But Edward's increasing financial demands led to disagreement, and in 1297, open conflict broke out when Roger Bigod refused to join the king's muster and lead an army he had raised into Gascony. Edward I had to give in because the Scots caused trouble again thanks to a certain William Wallace, but the political victory broke Bigod financially. When Roger Bigod died childless in 1306, his estates were returned to the king. 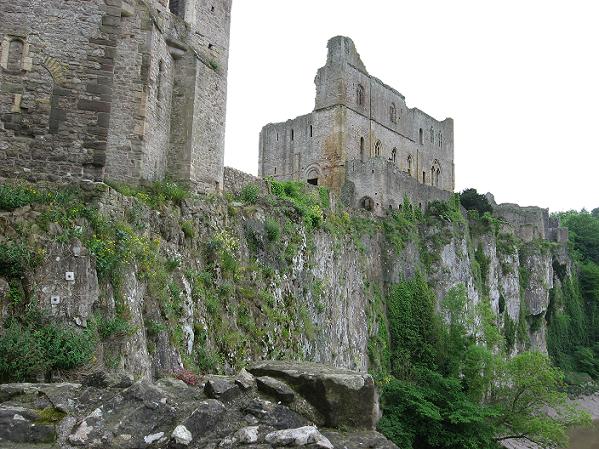 One of Bigod's towers in the foreground, the Great Hall in the background; seen from the river
During the time he was still affluent, Roger turned Chepstow, which he used as main residence, into a palatial stronghold. He constructed a maginificient new hall (including the sea gate) on the cliff side of the castle to represent his status as one of the most powerful magnates of his time. That building included a cellar, kitchen, accomodation rooms, and the hall itself. Bigod also added another tower later known as Marten's Tower (you can lose count of those in Norman castles) that would provide suitable rooms for high ranking guests. King Edward and Queen Eleanor visited the castle ein December 1284. Bigod also added another storey to the Great Hall. 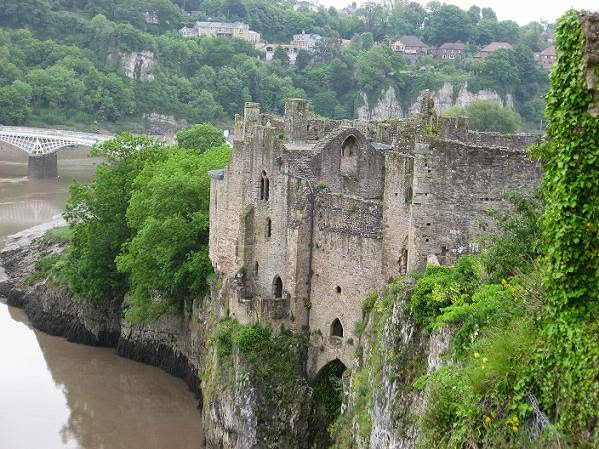 Chepstow Castle, the sea gate opening to the Wye river
After Edward I's death in 1307, the castle came to his son and successor Edward II. Edward seemed to have developed a liking for Chepstow. He would grant it to Hugh Despenser in 1323, but that tale I'll leave to Hugh's faithful scribess who has written an interesting blogpost about Hugh and Chepstow.

More about the history of Chepstow Castle can be found here and here. 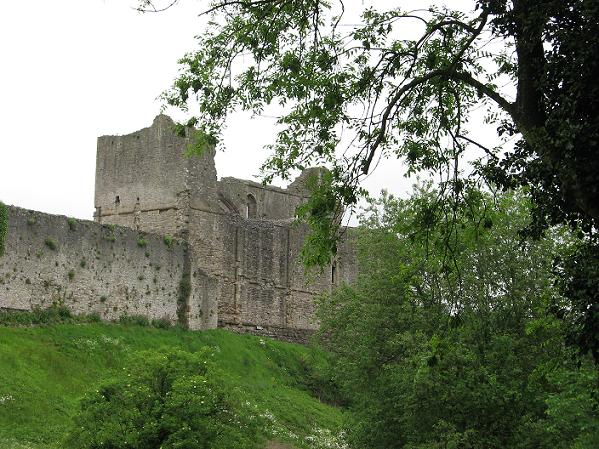 Remains of the Great Tower, seen from the Dell valley
Footnotes:
This is an extended version of a post from 2009.
1) The erection of the gatehouse had long been ascribed to William's sons, but dendrochronological dating of oak timbers from the doors shows that it has been built already in the 1190ies.

Comments:
Chepstow Castle is magnificent. It's also huge! I lasted visited it about 3 years ago.

I did not know Chepstow's story after William Marshal's death. Thank you for a fascinating read, Gabriele!

That's a spectacular site for a castle, perched up on the river cliff. Your photos show it well.

I didn't know that round towers were a William Marshal innovation in castle design. Roman forts sometimes had round towers or bastions. They must have gone out out of fashion for a while.

Looks rather formidable. Would be a challenge to take. Love the sea gate opening picture.