21 Jan 2018
A Fake Death and a Secret Mistress - The Stauffenburg near Seesen / Harz
Today I'll show you another rather obscure castle in my surroundings: the Stauffenburg near Seesen in the Harz mountain range (1). The castle may have been built by a 'Gerberdus of Stouphenburch', a member or vassal - the sources are not clear about that - of the family of the Counts of Katlenburg who served as imperial reeves. Unfortunately, I must rely on online sources and thus got two contradictory dates for the first mention of the Stauffenberg family: 1050 or 1154. The 1154 date seems more likely since it is connected with a feudal transaction involving Duke Heinrich of Saxony, a rather well documented time. But it is likely that a castle was built much earlier, maybe around 1050. The castle protected the ore mines in the surroundings and the road to Nordhausen. 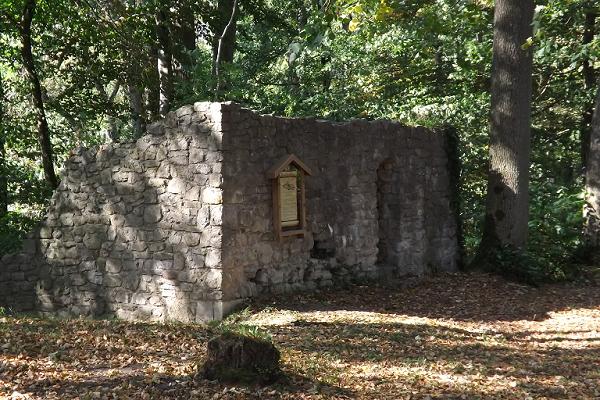 Stauffenburg, remains of the keep seen from the bailey 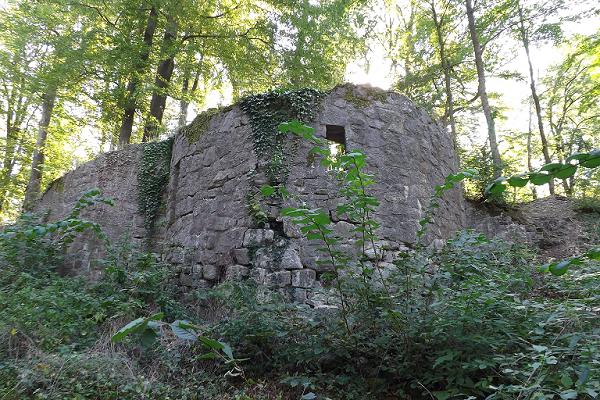 Remains of the main gate with one of the gate towers and curtain wall
The castle fell to Duke Heinrich the Lion of Saxony, but the Stauffenburg family, now ministeriales of the duke (3) still held the castle for him. Duke Heinrich pawned out the castle, and there are some stories about it becoming a stronghold of robbers which I could not confirm. That sort of legend gets attached to a lot of castles.

After Heinrich fell from power in 1180, the castle came into possession of the emperor Friedrich Barbarossa. When Heinrich returned from exile in 1189 and regained the former allodial possessions of his family, the Stauffenburg obviously was one of the contested places; there was a long legal shuffle between the emperor, the Welfen, and the archbishop of Magdeburg, though I could not figure out what rights the latter had to the castle. The emperor could at least claim the castle to have been built on former imperial land. It gets even more interesting since the emperor 1209-1218 was Otto IV, of the Welfen family. His successor was Friedrich II of Staufen. The quarrels shows that the castle must have been an important place in the late 12th to 13th century. 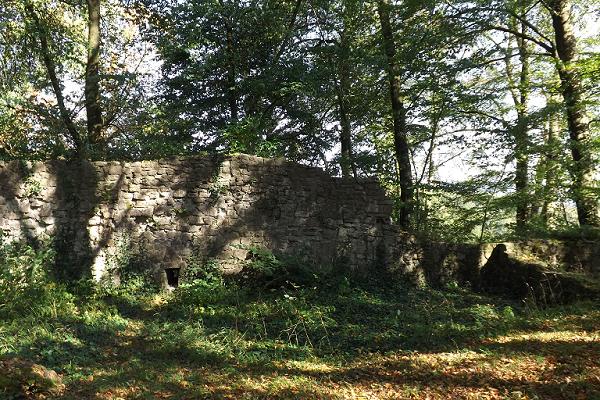 Remains of the curtain walls in the inner bailey
The Imperial Steward Gunzelin of Wolfenbüttel who held the castle for some time, managed to get along with both Otto IV and Friedrich II. His father had been a vassal of Duke Heinrich the Lion in the rank of ministeriales, but Gunzelin rose to the rank of higher nobility and expanded his possession to include allodial lands around Wolfenbüttel. The Stauffenburg was one of his responsibilites, and one of his younger sons would later take the name from it: 'Guncelinus de Stoyphonborg' (in 1254). The gate tower seen from above
The Stauffenburg finally came into uncontested possession of the Welfen family in 1429. It served as widow's seat of Duchess Elisabeth of Braunschweig-Wolfenbüttel 1503-1522. The castle must have been at the height of comfort for that time, since a dowager duchess would likely not live in a draughty ruin with leaky roofs.

Elisabeth, born 1434, was the daughter of Count Botho of Stolberg; she was betrothed to Duke Wilhelm II of Braunschweig-Wolfenbüttel - one of the several branches of the Welfen family (4) - already as child and moved with him to Göttingen in 1454. During her time in the Stauffenburg she promoted the advancement of mining techniques for silver and iron in the mountains of the area. She was a busy old lady, and one can imagine the castle must have been a lively place in those years. 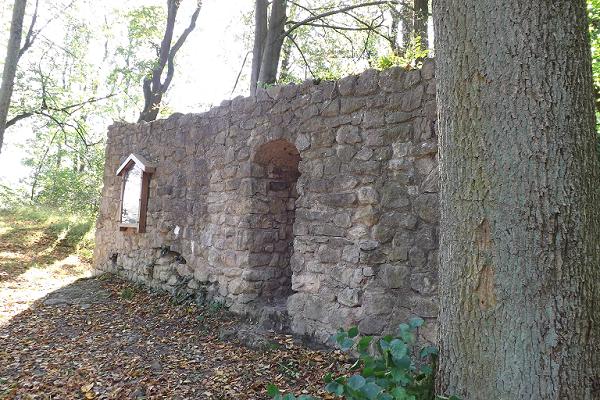 The keep
The next tidbit of history connected with the Stauffenburg involves Duke Heinrich II 'the Younger' of Braunschweig-Wolfenbüttel (1489-1568; 5). He ruled at a time when the Reformation had split Germany into Catholic and Reformed / Lutheran principalities and duchies. Duke Heinrich was a stout Catholic - the last of the Welfen to remain so; his surviving son Julius would join the Reformation as other branches of the family had already done. Heinrich got involved in various conflicts with the Schmalkaldic League, a military alliance of Lutheran princes, led by the landgrave of Hessia and the prince elector of Saxony. But Heinrich had the support of the emperor Karl (Charles) V.

The Schmalkaldic League conquered Heinrich's lands in 1342. Heinrich fled to Bavaria, returned with an army, but was taken prisoner by Hessian troops in 1545. When Emperor Karl V and his Catholic allies, including forces from Spain, won the Battle of Mühlberg in 1547, Heinrich finally was released from captivity and restored to his duchy.

But what gained him the nickname Wild Hal (der wilde Heinz) were not his wars against Protestant Princes; it was his affair with Eva von Trott. 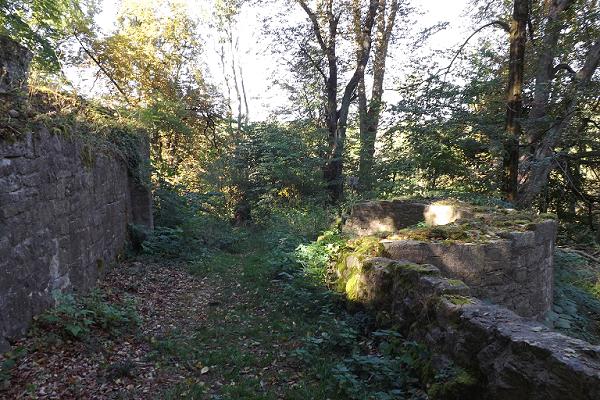 Zwinger between keep (left) and gate tower (right)
Eva von Trott was a member of the Hessian noble family Trott zu Solz. She came to Wolfenbüttel as the duchess' maid of honour in 1522, aged sixteen. Duchess Maria of Württemberg was Heinrich's first wife with whom he had eleven children.

But Wild Hal was more busy than that. Two years after her arrival Eva was pregnant by the duke. She said she wanted to visit her family, but traveled to the Stauffenburg instead where she delivered a boy. The kid was raised by trusted servants of Duke Heinrich. That was repeated two more times until pretty much everyone got suspicious. Both the duchess and Eva's family pressured Heinrich into ending the affair, and Maria sent the girl away. Eva came as far as Gandersheim chapter where she died of the plague and was duly buried. 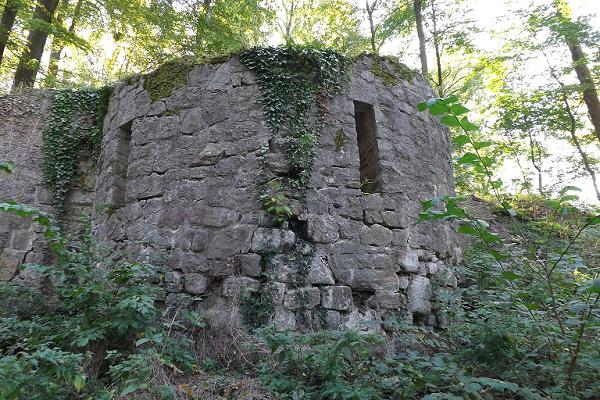 Gate tower
But it was a ruse. A sculptor had carved a likeness of Eva's head which was attached to a straw puppet dressed in Eva's fine clothes. I suppose a few people were bribed into not looking too closely at the body in the sarcophagus. The girl herself dressed up as peasant and fled to the Stauffenburg where she lived from 1532 to 1541. Duke Heinrich liked the hunt near the castle and Eva got seven more children. To keep people from prying around, some scary ghost stories were told, including visions of a woman in a white shroud, and so Eva lived in the castle with her children and some trusted servants. Many of the buildings have been lost today, but they had a lot more living space than the remaining keep and gate house. Remains of the curtain walls in the inner bailey, different angle
Duchess Maria died in 1541, but a marriage of Heinrich with Eva was not possible due to class distinction. When their affair and her survival became publicily know at the diet of Regensburg, and the Schmalkaldic League drove Heinrich from his lands, Eva fled the Stauffenburg in turn. Here whereabouts are difficult to trace. She spent some time in Halberstadt and in various castles. Duke Heinrich finally found her a place in the chapter of Hildesheim in 1558; she died there in 1567.

Heinrich obtained the title 'of Kirchberg' for his surviving children with Eva. He married again in 1556: Zofia Jagiellonka, the daughter of King Zygmunt (Sigismund) I of Poland. 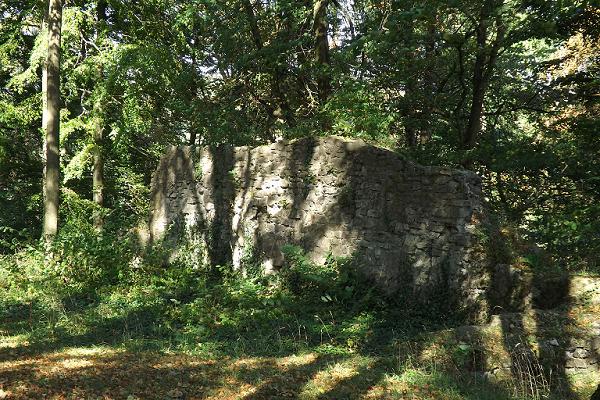 More remains of curtain walls
The Stauffenburg was a widow's seat again 1569-1580 when the eldest daugher of Duke Heinrich, Margaretha of Münsterberg, lived there. Margaretha had been married to the Silesian Duke Johann of Münsterberg, who died after four years of a marriage which remained childless. She turned the castle into a hospital and spent her time caring for the poor. The castle must have been a much different place then than thirty years earlier when children played in the yard during Eva's time.

Another scandal took place in 1587. The Protestant abbess of Gandersheim chapter, Margarethe of Warberg, spent the rest of her - rather short - life as prisoner in the castle. It is said that she had murdered her baby, the result of an illicit affair (6). 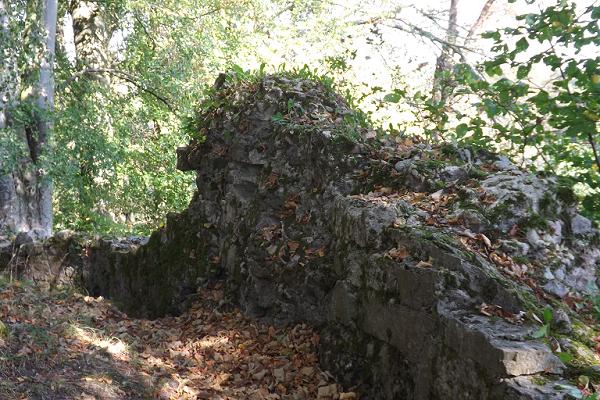 Curtain walls on the cliff side
The Stauffenburg was used seat of the administration office and prison of the Welfen dukes since 1600. 1713 the office was moved to the domain in the valley and the castle lost its importance. It was used as quarry, like so many defunct castles in Germany.

The keep and one of the towers have been restored to the first floor level during renovation work, and the remaining parts of the castle are secured against further decay, but the place is one of the more obscure castles today, with only a few visitors even on a nice, warm autumn day. 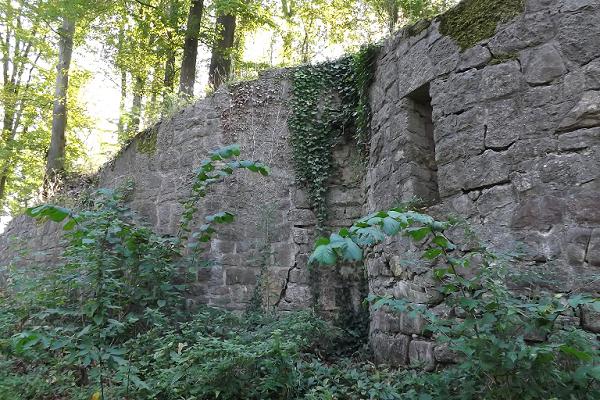 Different angle of gate tower and curtain wall
An old hollow way leads to the steep-sided promontory on which the Stauffenburg is situated. The upper part of the way is framed by earthen walls which may have been part of the outer defenses. A trench which cut the promontory off the ridge once separated the way from the gate, but it has long been filled in. Remains can be seen in some places, though. The entire castle measured about 200x90 metres, the inner bailey 85x30 metres.

The gate house with its flanking tower has been partly reconstructed. The remains are still impressive. Foundations of another tower remain, as do considerable bits of curtain walls, though not up to their original heigth. Several more buidings, probably some in half timbered style, must have framed the large inner bailey. 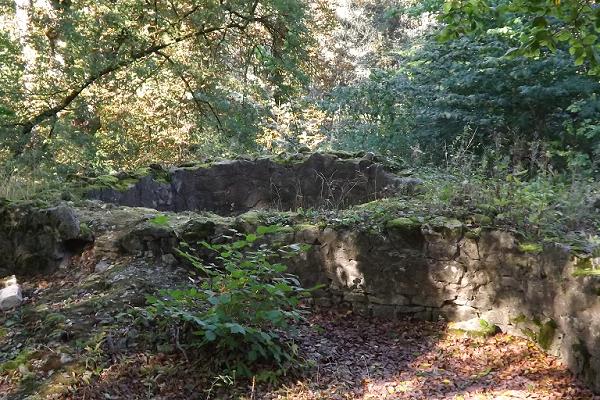 Foundations of a round tower
The partly reconstruced keep was not particularly large, it measured 7x7 metres. Main living quarters of the castle was likely a great hall which has been lost when the stones from the castle were used to build the domain in Gittelde. I could not find any information about the original heigth of the keep; maybe it can no longer be estimated. The keep has a cellar which was used as prison (though not in case of the abbess Mathilde who was allowed to move around within the confines of the walls). 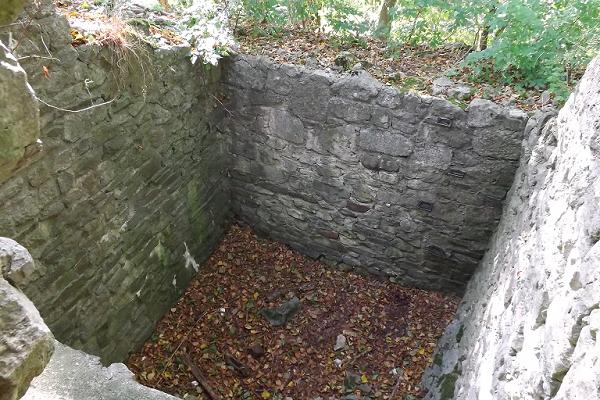 Cellar
Footnotes
1) The castle is not connected with the House of Staufen / Hohenstaufen which provided Germany with a dynasty of kings.
2) The story that the Stauffenburg was a favourite castle of Otto's father, King Heinrich I 'the Fowler' († 936), is a legend. The biography by Wolfgang Giese (Darmstadt 2008) doesn't mention either Gittelde or the Stauffenburg. We can't even be sure that Hermann Billung ever stayed in Gittelde; such settlements were mostly a source of income.
3) If they were ministeriales, the Stauffenberg were likely vassals of the counts of Katlenburg and not a branch of the family, who were freeborn nobility.
4) More about the various branches of the Welfen family can be found here
5) In English research literature he is also known as Henry V of Brunswick-Wolfenbüttel.
6) Her case is less well documented and subject to legend; the only proven fact is her captivity in the Stauffenburg. 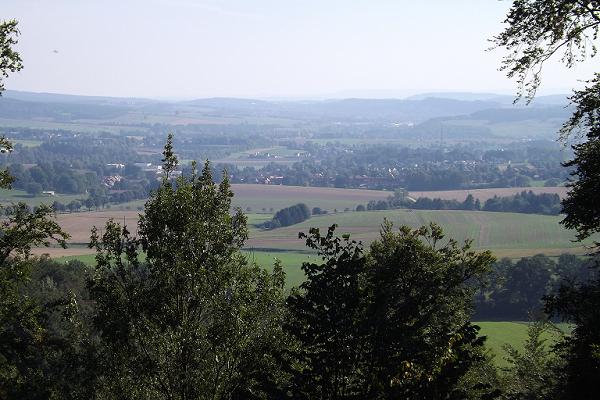 View from the Stauffenburg
And finally a pretty view from the castle. One can imagine that dowager duchess Elisabeth stood here wondering how much ore was to be found in yonder mountains, that the unhappy abbess Margarethe tried to glimpse the tower of the church in Gittelde where she was eventually allowed to visit and pray, and Eva looked out for her lover Heinrich.  ¶ January 21, 2018