11 Mar 2018
A Trace of Spring in Dovrefjell - From Trondheim to Oslo by Train
I took the train from Trondheim to Oslo mid-April 2011 after the Hurtigruten voyage and managed to take some photos out of the moving train. The usual caveat for pictures taken out of a train or bus applies: there might be some reflections from the windows and slight blurs. 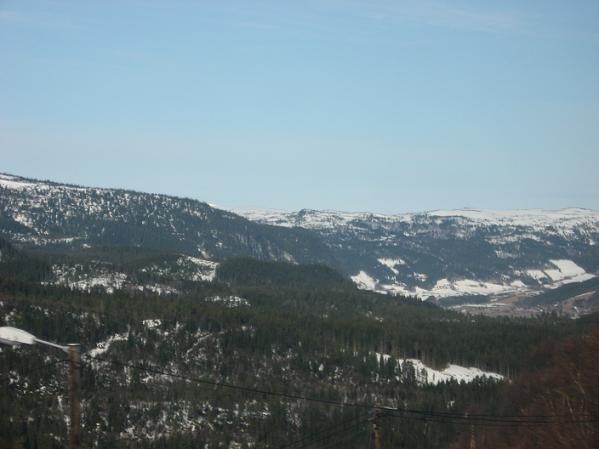 Kongsvoll Mountains
I traveled the Dovre Railway in the 'wrong' direction. When it was built, the first stage covered the way from Oslo to Eidsvoll and was the first railway in Norway (1854). The line was then built in bits and parts. The stretch between Søren and Trondheim dates to 1864, followed the connections between Eidsvoll - Hamar - Lillehammer etc., while the last part from Dombås to Søren - the original Dovre Railway which today gives the name to the entire route - was finished in 1921. 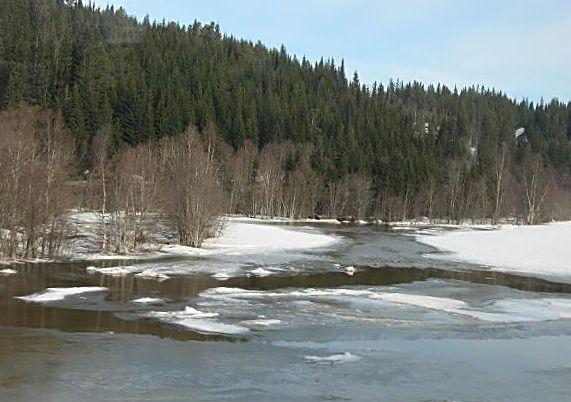 Melting ice on the river Driva
The railway follows the Mediaeval pilgrim's route from Oslo and surroundings to the cathedral and the shrine of St.Olav in Nidaros, as Trondheim was then called. The journey would take several days; the lake Mjøsa was crossed by boat in summer, and in winter the Dovrefjell was sometimes impassable at all. Today the journey takes about 6 hours. 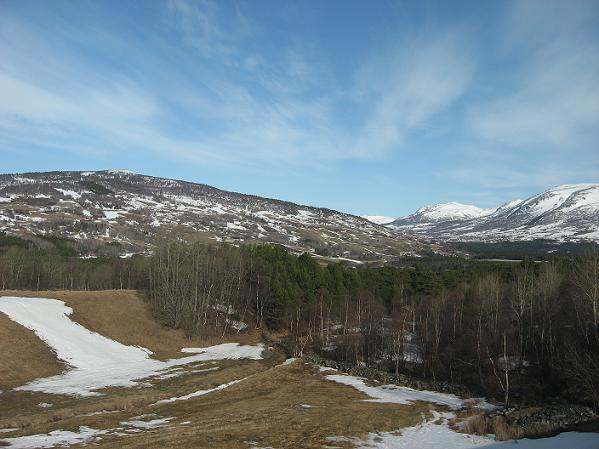 Mountains in the Dovrefjell
The first mountain range some 150 kilometres south of Trondheim is the Kongsvoll (886 metres above sea level). The area is knows for a rich and varied mountain flora. The railway runs beside the river Driva (see photos above). 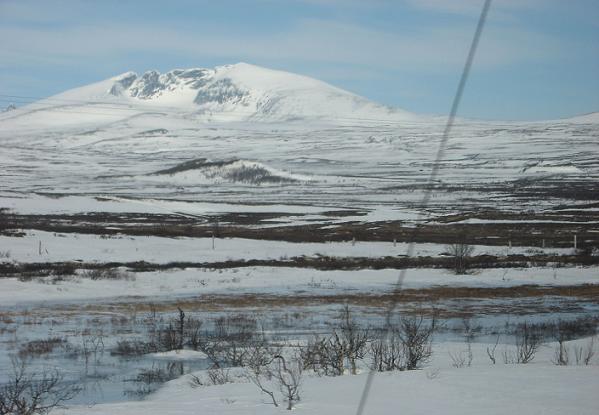 More mountains in the Dovrefjell
The Kongsvoll gives way to one of the larger mountain ranges in Norway, the Dovrefjell. The hightest point of the railway is at Hjerkinn, 1025 metres above sea level. The highest mountain, the Snøhetta, is even higher at 2286 metres. The Dovrefjell and the bogs at Fokstumyrene are rich in wildlife: moose, reindeer and musk ox can be found here. The site was declared a national park as early as 1923. 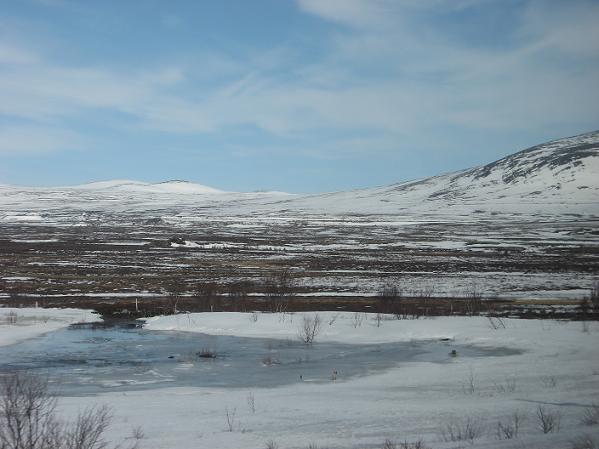 Bogs in Dovrefjell
The train then follows the river Gudbrandsdalslågen down to Lillehammer and Lake Mjøsa. The Gudbrandsdal (dal = valley) is a popular area for tourists who love nature and hiking. The river and its tributaries are fed from the glacier at Jotunheimen. 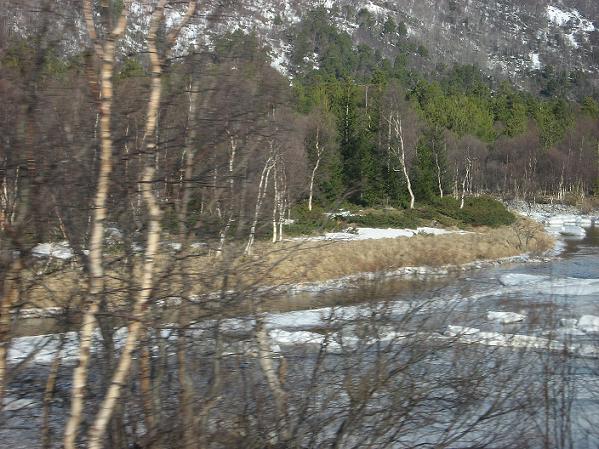 River Gudbrandsdalslågen
Lake Mjøsa is Norway's largest lake. It is 120 kilometres long (360 square km expanse) and the train follows its shore almost the entire way. Other than the fast running rivers which were busy thawing, most of the lake was still frozen, though I'm not sure if the ice still carried. It did on the lakes near Kirkenes, but that is a far way futher north. 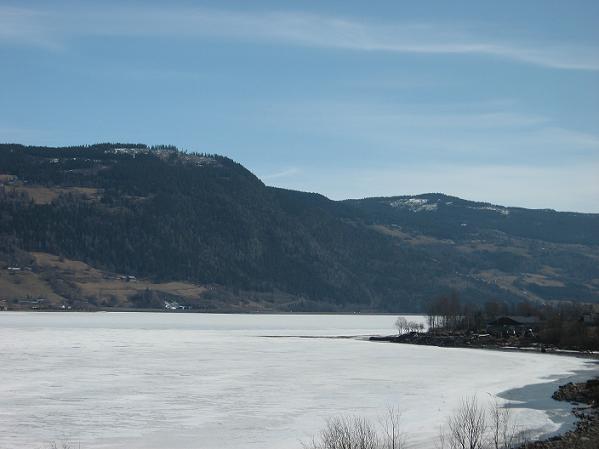 Lake Mjøsa was still frozen
From Eidsvoll at the end of Lake Mjøsa it is about 70 km to the final destination: Oslo. I arrived in Oslo on a sunny and rather warm early afternoon, very different from the cold and overcast weather two weeks ago when I came from Copenhagen to stay a few hours before I took the train to Bergen. Spring had arrived in southern Norway. 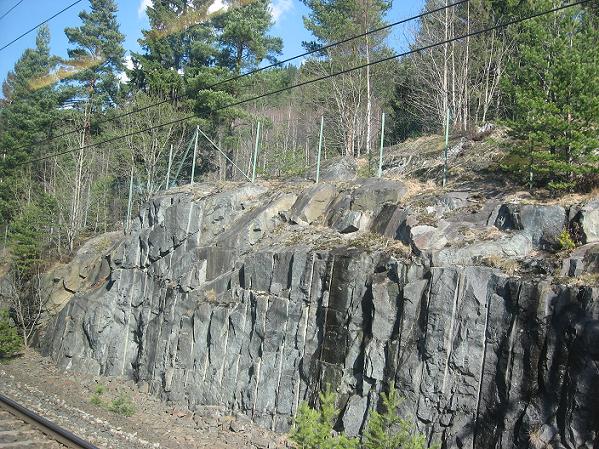 The railway cuts through basalt cliffs near Oslo
I hope you liked the little tour through a part of Norway at a time of the year when the weather can change between winter and spring within a few hours.

Looks like the snow in the UK is mostly gone now as well. There was no snow where I live, but some really cold days. At least a bit of winter. 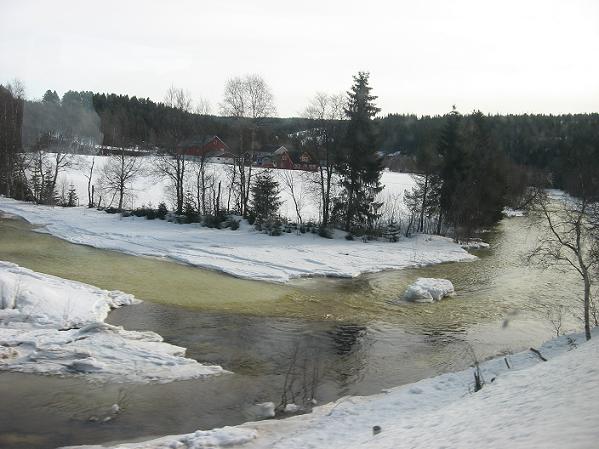 A thawing river
The information in this article comes from a little guidebook the NSB customer Service offered the guests of the railway: Dovrebanen Oslo - Trondheim - I pilegrimens fotspor, 2002.  ¶ March 11, 2018