15 Aug 2007
The Saalburg, A Reconstructed Limes Fort
The German Limes was a frontier cutting through the right angle formed by Rhine and Danube, the first borders of Germania. It starts north-east of Wiesbaden and meets the Danube near Regensburg, thus adding not only the Taunus and Odenwald forests but also the fertile lands of the Wetterau and Neckar plains to the Roman Empire. Those areas were called agri decumantes.

The first stage in the development of the Limes was Domitian's victory against the Chatti in 83 AD. To keep them off, a series of watchtowers and forts, connected by a road, were built. The early Saalburg fort (the Roman name is unknown) was a wall and timber fort with wooden buildings housing about hundred men.

The next stage 90 AD was a larger fort, but still a timber construction fortified with walls and trenches. It was flattened when in 135 AD the second Raetian cohors equitata (a 500 man troop of mixed horse and infantry) was stationed in the Saalburg and built a new fort. 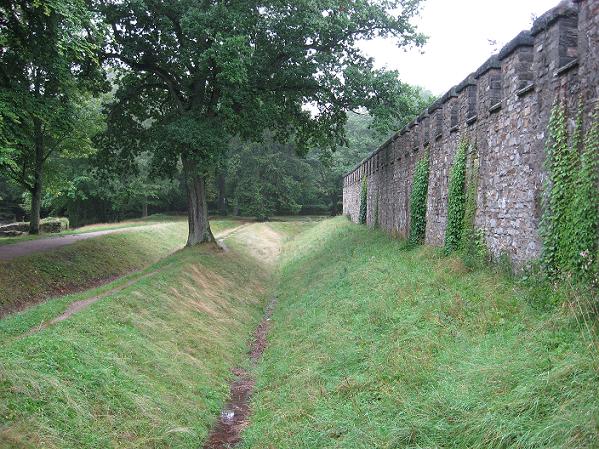 Saalburg, wall and trenches outside the fort

The new fort encompassed an area of 147 x 221 metres, surrounded by a stone wall and with both stone (headquarters) and timber buildings (barracks, stables). Outside the fort a village developed where artisans and traders lived. The Romans added a stone bath and a guest house. It is estimated that up to 2000 people lived in fort and village.

After several massive Germanic incursions into the agri decumantes, the Limes was abandoned in 260 AD, fort and village fell into decline. The walls of the fort were used as quarry in the Middle Ages, much like the Hadrian's Wall. 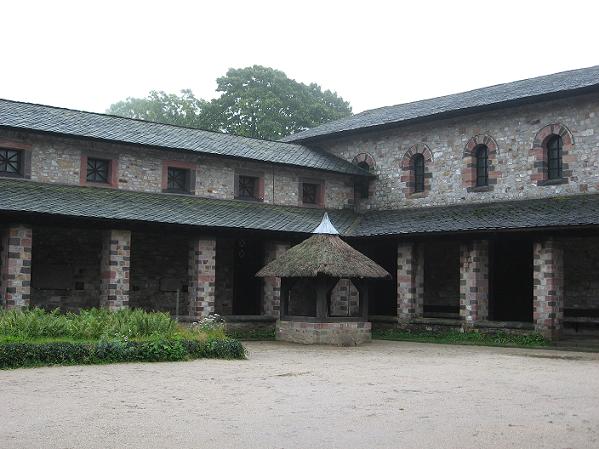 Inner yard of the principia
In the 19th century, interest in Antiquity grew, and from 1894 on the Saalburg was excavated under the leadership of the archaeologist Louis Jacobi. The fort and its surroundings have been excavated fully which was an important achievement for the time, albeit modern archaeolgical techniques would be able to answer some questions better today.

Emperor Wilhelm II who took a keen interest in the discoveries, ordered the Saalburg fortress to be rebuilt in 1897. Leader of the reconstruction was Jacobi.

Between 1897 and 1907 the Saalburg fort was reconstructed on the foundations of the old castellum. Jacobi used other known Roman buildings as foil and thus managed to reconstruct a somewhat close representation of a Roman fort. Though some details are wrong like the space between the merlons which is too small. It is said that Wilhelm ordered it that way, and who can argue with an emperor. Also, the white paint with the red lines is missing, thus making the walls appear aged instead of correctly Roman. 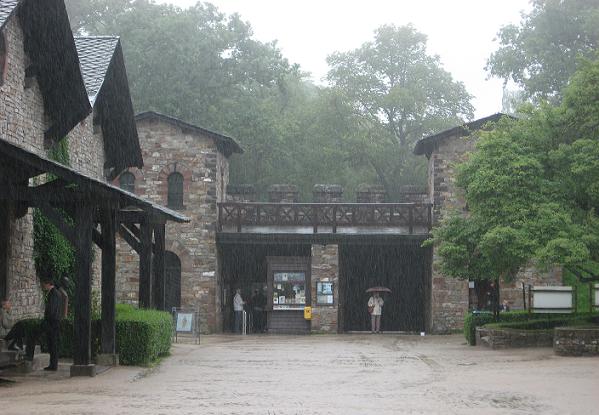 Via praetoria leading to the south gate, on a very rainy day
Not all buildings inside the fort have been reconstructed, instead leaving space for a park-like area with lawns and trees. The horreum (granary) hosts a museum; the principia (headquarters) have been completely rebuilt as well as a wooden barrack serving as taberna (restaurant), and several wells. Further reconstruction is going on these days; side wings and a peristyle garden have been added to the praetorium (commander's house) which is the seat of the museum administration, and more barracks are to be built.

Since the entire outer wall stands in its original dimensions, one can get a good impression of the size of a Roman military fort. Quite impressive, despite the rain. And there's one advantage to the sucky weather - less tourists standing around in your photos. :)

Lol I hear you on the sucky weather--those days are the best to do that stuff.

Lovely pics. Funny, you don't think about stuff like that so much when you think of Germany. I mean, there's that fairy-tale Schloss (Neuschwanstein?), and I hear Munich is adorable (and totally want to go there one day!) but I guess because I didn't learn a lot of German history in school I never thought about it.

That was fascinating, a lot there I didn't know. And more great pictures (you do take really good pictures). Thanks for sharing them.

Hi Oscar, thank you and welcome to my blog.

December,
I know Neuschwanstein somehow outshines 2500+ years of German history in the US and Japan, lol. But we have Iron Age hill forts, Celtic remains from 400 BC, Romans, lots of Mediaeval stuff and quite some Renaissance and Baroque buildings. If you scroll down my ever growing sidebar to Important Blog Entries and further to Peregrinationes (travels), you'll find more Romans and some Mediaeval things. :)

Thank you, Ann. Photographing is a hobby I'm indeed getting quite good at, and it's fun.

Gabriele, about how tall was the wall?

Nice photos and a good description. Looks like a fun place to visit.

Did you notice the ditches are cut at exactly the correct angle? I hope every thing was that well done.

Hank, it is a fun place to visit. Most of it was well done according to the knowledge of a hundred years ago, except the wrong merlons and maybe the decision not to paint the walls. With the new reconstructed buildings, this is done, but it was decided not to change the original reconstructions since they're part of our history by now - a museum in a mueum, so to speak.

We're having mega sucky weather down here at the moment, but you're right about it being better for seeing the sites!

I love the photos. It looks like an interesting place to visit.

Shelley,
it's a great place to visit, and with all the additional reconstruction going on right now, it should be more fun in 2008. If only the Autobahn Kassel/Frankfurt wasn't so stuffed with trucks and most of the drivers such idiots, the two-and-a-half hours drive would be less of a hassle.

Constance,
I haven't found detailed measures, but judging from standing in front of the thing, I'd say 3.50 to 4 metres.

Wow...I vaguely remember goign there when I was a kid.

It at least looks very familiar.

Hi Library Rat, thanks for stopping by.

The Saalburg is one of those places teachers love to take the kids. :)

This looks so wonderfully familiar.... I visited the Saalburg multiple times on Latin class field trips in high school. Great site. Don't forget the foundations of buildings still visible outside the fort--my favorite is the bathhouse where you can still see some of the pillars supporting the hypocaustum floor. The earth mounds and ditches constructed as part of the Limes wall are still visible in places throughout that area of Germany. I remember climbing around them in the woods as a kid. There are the foundations of a guard tower with a reconstruction right next to it near our favorite swimming pool.

Have you ever visited the excavations and reconstructions at Colonia Ulpia Troianum (I think that's what the Roman name was; I can't remember the German name)?

Thank you for the pictures.