8 Sept 2008
A Fancy Park and Palace
Last week I went to revisit a non-Medieaval place, the Rococo palace Kassel-Wilhelmsthal. The prettiest feature that one offers is the large park, a mix of Rococo and English landscape style, with fountains, lakes, pavillions, alleys, a fake Mediaeval tower, and a few gilded statues. Here's a photo collection. 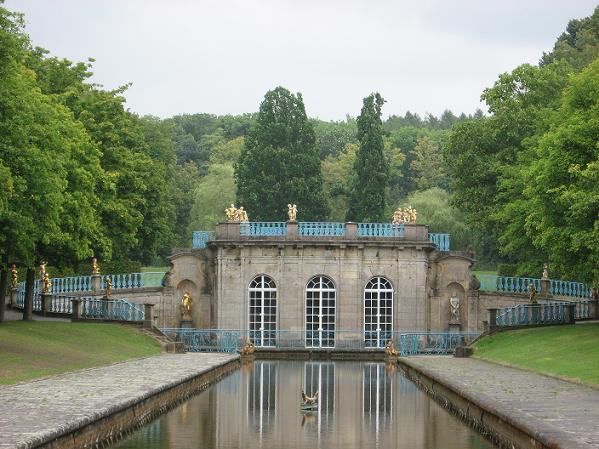 The great pavillion with artifical 'river' 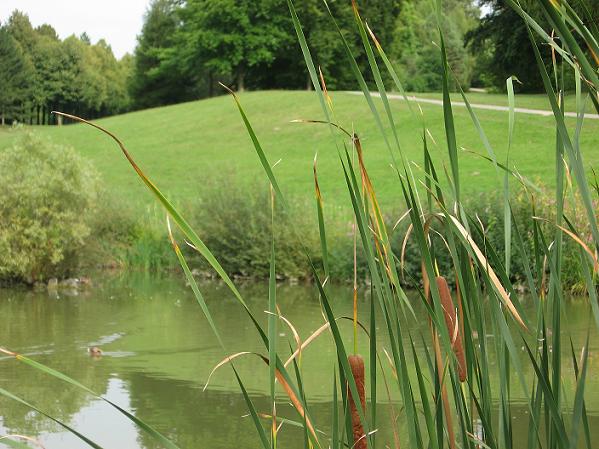 Reeds in a lake, part of the English garden 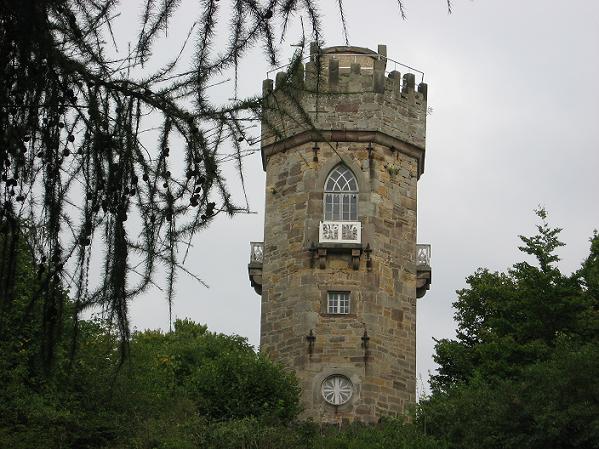 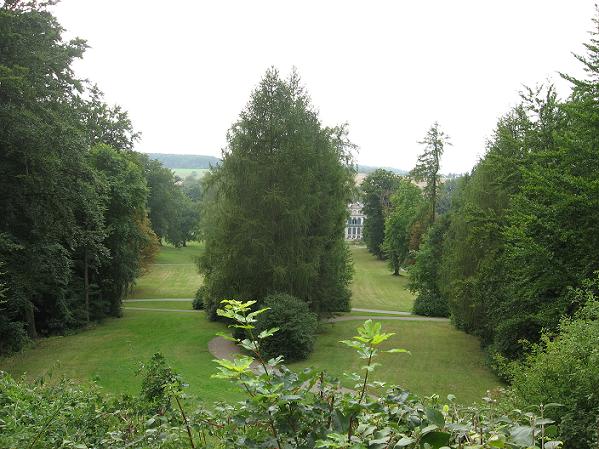 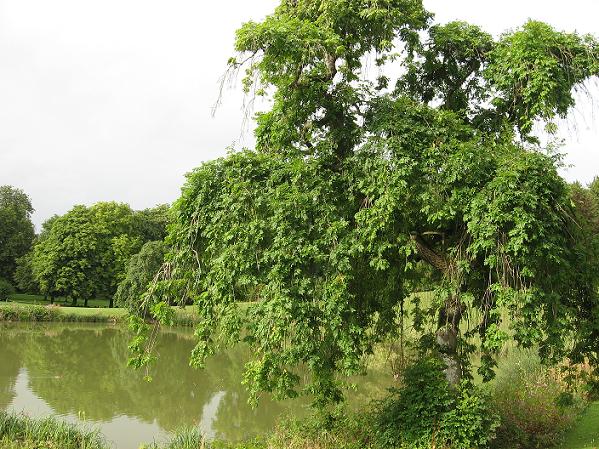 Artificial lake near the palace
Below we'll have a look at the palace building which - against the rules of landscape architecture of the time - lies in the vale, not on top of the hill. 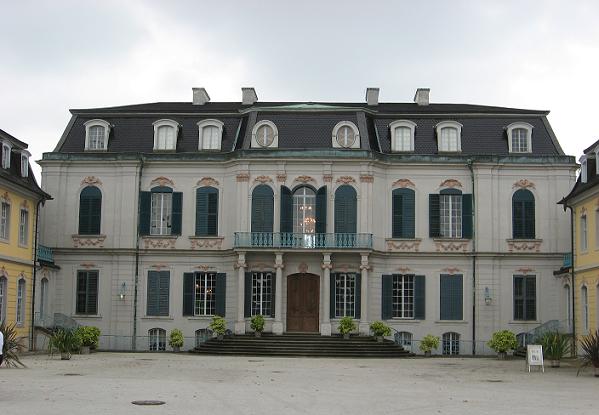 Wilhelmsthal Palace, front side
Landgrave Wilhelm VIII of Kassel wanted a summer palace, a maison de plaisance, outside the town, and had the construction of Wilhelmsthal Palace started in 1743. But he died before palace and park were finished. 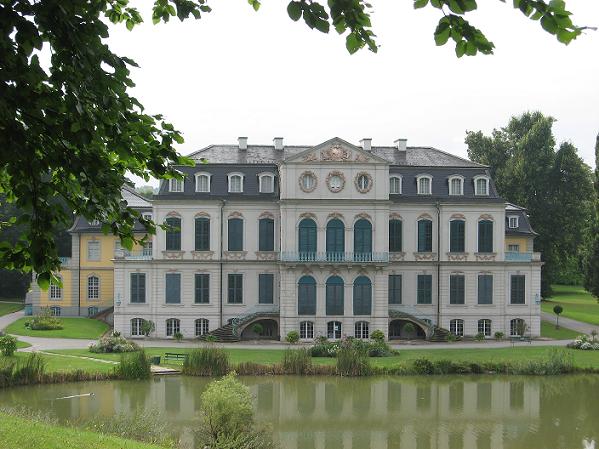 Wilhelmsthal Palace, the so called 'seaside'
The famous Rococo architect François de Cuivilliés the Elder who mostly worked as Bavarian Court architect in Munich, developed the plans of the two storey main building with side wings and guard pavillions. The interior stuccoes and wood carvings were created by Johann August Nahl who had already worked in Berlin and Potsdam for Friedrich the Great; the paintings by Johann Heinrich Tischbein the Elder. Most of the tapestries and furniture came from England. 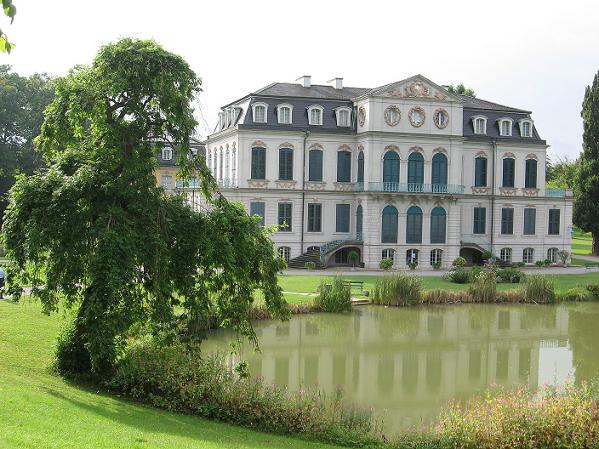 Another view from the park
Wilhelmsthal Palace in one of the most important Rococo buildings in Germany, but the palace is in dire need of some fresh paint. I haven't been inside this time, and I only have some vague memories from a visit some twenty years past, but somehow the place has lost some of its splendour. Let's hope there'll be money for renovation.  ¶ September 08, 2008

Comments:
All it needs is a few Corgis, and it would be perfect!

So pretty and green!

I really enjoy the pictures you take. The digital quality is so good you can almost smell the grass. Thank you for the tours.

Grinling Gibbons would be straining at his leash to "fix" that garden.

I LOVE the first picture! It could be on the cover of a magazine!

Lol, he corgies would love the place. So much space to run about and enough chances to get into mischief. :)

Alianore, the result of your average German summmer, lol.

Stag, the gibbons can join Constance's corgies, and then we'll soon have a very creative garden. :)

Meghan, full with people in period dress. I think it would work best on a Romance cover.

I love the Roccoco style - we have a garden near me - Painswick House Gardens which was landscaped like that. It's really beautiful and ha a relaxing atmosphere.

Somehow I never thought of that style being found anywhere else lol!

What is animal is swimming in the cattail photo?
You take beautiful pictures.

Lady D, we have a number of these gardens. It goes back to the time when Germany was a quilt of small, more or less independant entities, and the Prince Elector of This and the the Duke of That all wanted their own little Versailles, their own landscaped park, a hunting lodge and whatever. Some of those survived.

Thank you, Bernita. It's a duck, one of several living there.

Very pretty. The first shot looks like a miniature Versailles.

Great photos as always. I agree with Constance...the Corgis would be an asset.