18 Feb 2010
Beautiful Roman Daggers
I've collected virtual Roman military daggers, pugii (the singular is pugio), for some time now whenever a museum allowed taking pictures. Here are some pretty ones found in Germany, dating from Augustean and Tiberian times.

For some reason, daggers are more frequently found than swords of the short gladius or the longer spatha type (though some gladius fragments have been found in Hedemünden). Maybe those have been recycled more often. 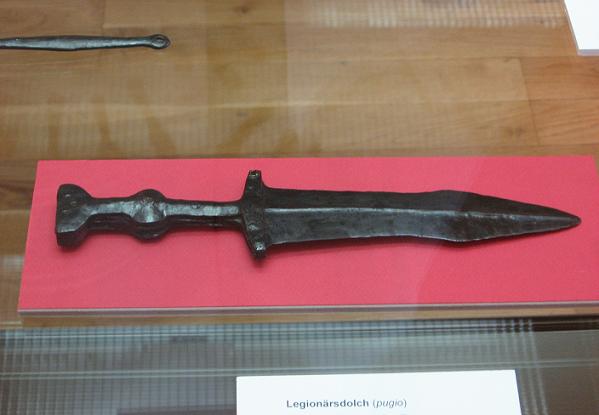 The iron pugio was found in Hedemünden main camp (camp 1), and cleaned and conserved by the company of H. Biebler in Mühlhausen / Thuringia. What you find isn't such a shiny item, but some caked mix of metal, rust and dirt. It takes lot of experience to see there's something cool hiding in such a lump.

The photo was taken at the exhibition of the Hedemünden finds in Hannoversch-Münden, 2009. 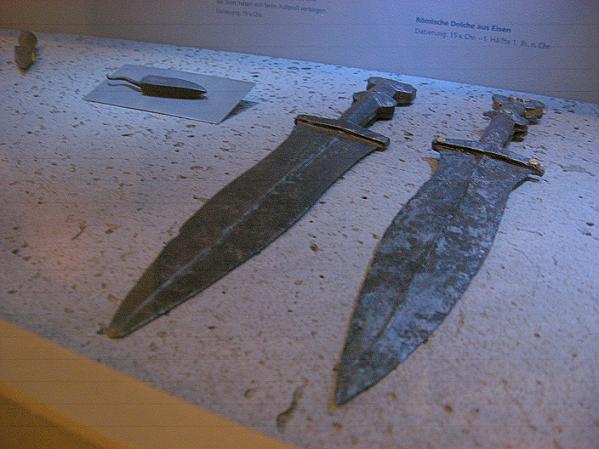 Roman dagger, Oberammergau / Bavaria
This one is from the Imperium Exhibition in the Seelandhalle, Haltern. The notched exemplar to the left is an original found in Bavaria; the right side one a reconstruction. The dagger has a burr along the middle of the blade; the handle was fixed to the blade with five iron rivets. The weapon dates between 15 BC and the first half of the first century AD (a loan from the Landesmuseum Munich).

The item in the background that looks like the Roman version of a computer mouse is a catapult bolt with a bent pin that would have fixed it to the short wooden shaft. 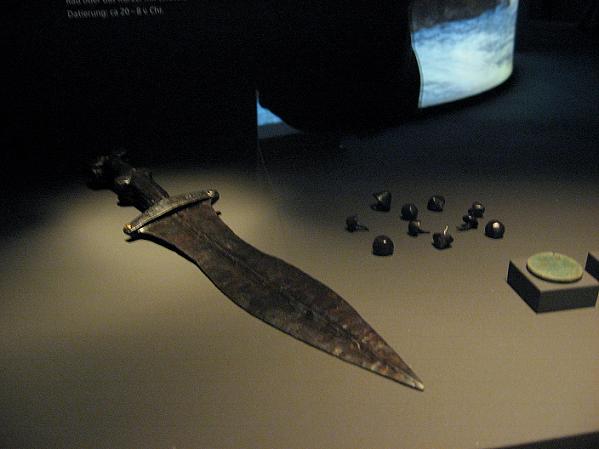 Decorated pugio, found near the Hedemünden camp
The second Hedemünden dagger, found on the way between the main camp and the recently discovered smaller camp on the Kring hill. The find is interesting because it had been carefully deposited under a stone, and not simply lost. It may have been a sacrifice. (Displayed in the Imperium Exhibition 2009, together with some sandal nails.)

The pugio is damasced, with a middle burr and fullers running along both sides of it. The handle is layered. Around the iron nucleus - a continuation of the blade - there's a layer of bone and another iron one, held together with wire and rivets of non-ferrous metal. The iron-sheeted pommel has a wooden nucleus. A rather elaborately made and pretty weapon. 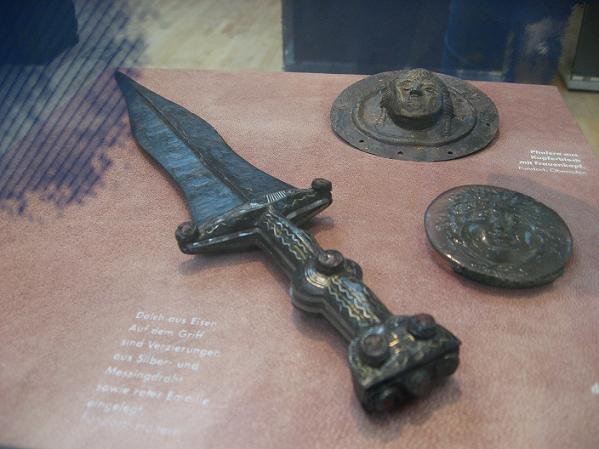 Decorated pugio, LWL Museum, Haltern
A local find from the Lippe river where the Romans had several forts and camps until the Varus disaster (and maybe even longer, as is now discussed). This pugio has a decorative pattern of silver and brass wire. Another beautiful weapon that may have been the possession of an officer, a centurion maybe. The higher ranking officers probably had even more expensive ones.   ¶ February 18, 2010

Comments:
Those are some heavy-duty weapons ... they look like Bilbo's Sting!

Very, very nice.
Am surprised to see they appear to be so broad of blade.

Thanks so much for collecting and posting these photos. It helps to visualize these daggers for research and writing. Well done!

I wouldn't like to argue with one of those :-)

Brian, they were used in close combat. You could always lose or break your short sword, and a dagger was the next best thing.

Thank you, Mirella. You're welcome. BTW, Erfurt is on my list of short trips this year - finally.

Carla, depends on how long your own weapon is. A spear would win. :)

While swords are weapons that would come out for cleaning training and of course fighthing, daggers were also everyday working tools, so their would be much more oppertunity to lose them.

I have been hooking up rusty old horseshoes to electricity to try and reverse the corrosion. Quite an interesting experimental procedure. Someday I will get the nerve to try that on an armour....
Or a pugio.

It's quite surprising just how solid those daggers look - especially the first one - that looks quite heavy. Also, were the handles left as we see them, or would they have had some kind of leather covering for grip?

Good point, Hank. We seldom know how a still intact weapon came into the ground, though the second Hedemünden find is interesting because the find situation looks like a sacrifice, not a loss. Whatever altar there may have been above the covering stone is long lost. A Roman sacrifice is considered the most likely (maybe the chap survived the attack at the Kring 'mile castle'), but one can't exclude a German victory sacrifice like the Danish sword finds. It's what makes Archaeology so much fun. :)

Jules, probably yes, esp. in case of the first two. The handles are a) unadorned, and b) would get slippery when wet or bloody. I'm less sure about the second Hedemünden one, and the Haltern dagger with its silver wire decorations may not have been covered. The wire would have given you a good grip, plus you don't use expensive decoration if you can't show it off. :)

Constance, make sure you take the guys out with your trebuchet before they can come at you with those daggers. :D

Thanks for posting these photos. The daggers look terrifying enough, I can't imagine the swords!

It's amazing they've survived the centuries. History come to life.

Brad, the Roman gladius-type swords were rather short, nothing like the ones the Vikings and Normans were waving around a few centuries later. :)