12 Jul 2010
Ships on the Rhine, Roman Style
A Roman legionary got 960 gram wheat every day, for bread or porridge. A full strength legion had about 5000-5500 men, and Varus fielded three legions in 9 AD (plus two left behind in Moguntiacum). Do the maths - that's a lot of wheat. Plus wine, olives, cheese, bacon and other food, leather and cloth, iron to repair weapons .... The supplies for the army were always a logistic nightmare, and even more so in countries with no Roman infrastructure. Nor did the German tribes grow enough grain to feed that swarm of mail-clad cicadas.

Rivers played an important role in the supply lines. The area in question (middle and northern Germany) was framed by the south-north running Rhine and Elbe, with the Ems and Weser cutting their way in the same direction in between. Two larger rivers run east-west towards the Rhine, the Lippe (which confluences at Vetera/Xanten) and the Main (which meets the Rhine at Moguntiacum/Mainz). Those two rivers became the main deployment lines into Germania during the conquests of Drusus (11 BC) until Germanicus' campaigns (16 AD). 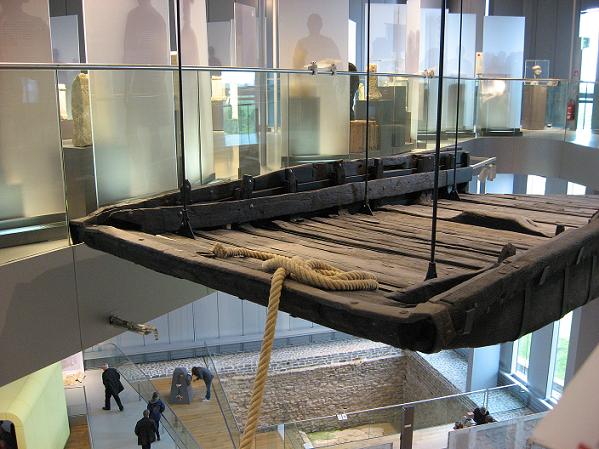 Even a smaller barge like this one found in Waadt near Xanten could transport 10 tons of cargo, way more than a mule cart or ox waggon. It was originally 14-15 metres long but had a draught of only 50 cm which allowed manoeuvering in flat waters. The curve of the prow allowed to drag it onshore without needs of a proper quai. It was discovered in 1991, in a place that once had been a canal leading from the Rhine to the harbour in Colonia Ulpia Traiana (Xanten*). According to dendrochronology it dates to 95 AD but the barges used in earlier times were much the same.

Larger barges could be up to 35 metres long and 6 metres wide, with a draught of 1m - they looked much like a smaller version of the modern transport barges. Often they were dismantled when they were in bad repair, and the hulk used as foundation for dykes and such, but some better preserved finds show that at least some of them had a cabin or two at the back. 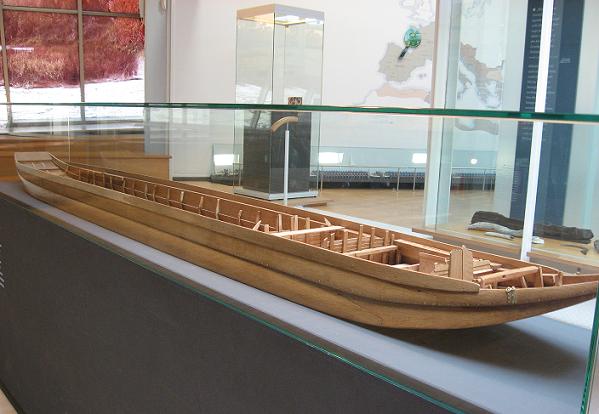 Model of the De Meern barge (Utrecht / Haltern)
This model of a barge found near Utrecht (Netherlands) represents one of those lucky finds not part of the Roman reuse program, but probably a shipwreck. The bulkheads are well preserved as are traces of the cabin and the open kitchen with a tile stove. The cabin contained a bed and a clothes chest that also served as chair, and the bargee was the proud owner of several saws, a hovel, a drill, and other tools of a carpenter as well as a stylus and wax tablets. The vessel shows traces of a new caulking and has been upkept for some 30 years.

This barge, dating to 148 AD, is unusually slender, 14.7 metres in length but only 1.7 metres wide. Maybe it was a repair barge that would mostly carry things needed for the work of a carpenter who travelled to the forts at the Lippe river to help with kaput furniture and other items. Though timber itself was the one thing you could easily find in Germania.

Close to this one another barge has been found that transported 20 tons of wheat. Analysis of weeds mixed in has shown that it came from Gaul.

Remains of the Zwammerdam 3 barge, Utrecht
(lent to the LWL Museum Haltern for the Imperium exhibition 2009)
This one, another find from Utrecht displayed in Haltern last year, is particularly interesting because it follows the structure of a dugout, not the usual Roman plank techinque, though several features have been added that turn this one into a Roman ship, like holdings for a mast, gunwale and frames. With a size of 10.7 x 1.25 metres it's another slender barge, suited for use also in smaller rivers with even more meanders than the ancient Rhine.

Roman tranport barges were mostly hauled, though they had a sail as well. The average distance was 15 kilometres a day upriver, that would mean a boat could cover the way from Vetera to Haltern in four days. Since the rivers changed so much, no traces of hauling paths have been found.

Not all of this work was done by the Roman army, it's assumed that some of the transport business was given to private companies. 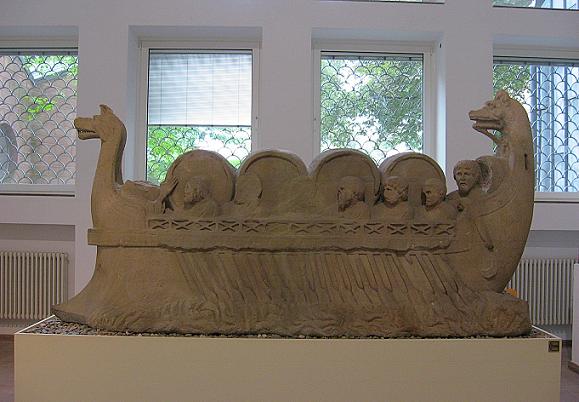 The Neumagen wine ship
A somewhat younger (220 AD) and different ship is represented in this stone carved grave monument found in Neumagen-Dhron at the Moselle (which confluences into the Rhine at Koblenz). That area belonged to the province of Gallia Belgica and was thus Romanised. The Moselle was part of the river system infrastructure that connected Gaul with Germania back when the Romans were present in the latter. The Gallic wheat mentioned above may have come down the Moselle.

The monument can be seen in the Rheinisches Landesmuseum Trier. It was commissioned by a wealthy wine merchant and originally consisted of two ships. That guy surely liked it big. The display side of the ship shows four large wine barrels, six oarsmen but 22 oars, and a helmsman.

The ship has been reconstructed in 2007, using this monument and other finds as foil. It's 18 metres long with 42 oars, but it has a modern engine as well. The Stella Noviomagi (Star of Neumagen) can be rent for cruises on the Moselle. 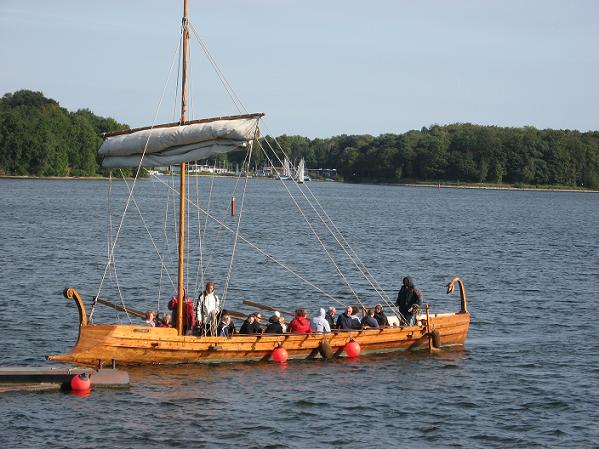 A question still disputed is whether some of the patrol ships would serve as escort of transport barges, or whether the barges may rather have added some soldiers to the crew. It could even be that the Romans felt so secure in Germania after the mass surrender to Tiberius in 4 AD that they didn't protect their transports.


* Vetera is the Roman fort, Colonia Ulpia Traiana the town that developed near it and was granted rights of a colonia under Trajan (53-117 AD; its remains are now part of the Archaeological Park Xanten).

Gabriele, I love your boat stories!

Can you remember back to http://lostfort.blogspot.com/2009/01/autumn-at-werra.html and tell me anything about the time period of the original boat on which the medieval "reconstructed river merchant ship" was based? Its design is similar to the "reconstructed Victoria" in today's post... not much changed over the centuries!

You wrote today "Roman transport barges were mostly hauled, though they had a sail as well." Hauled by oxen? May I assume that boat masts were hinged for when a bridge was encountered?

Great post! I love discovering things about the Romans I didn't know. Any signs of boat mounted catapults? *g*

Probably both options (patrol ships and added soldiers) were used depending on the circumstances. Can't see it as an either/ or (oar!)

I find information about the logistics of supplying armies fascinating - thanks for this post, Gabriele.

ThisWas, the ship in th Werra was a late Mediaeval cog. It was just anchoring there but no information avaliable. I'll try and hunt something down if I can find it online.
Since none of the haulings paths remained (rivers changed a lot by nature and recently also by man) we can't say for sure, but my guess is that at a time where humans were easily avaliable (slaves) they would have been used. Oxen may have been used as well.

Constance, the seagoing war ships had catapults, and pretty big ones at that. River patrol ships could mount a smaller one in the back, and it's not impossible that the Romans might have put one or two on a barge on occasion as well, but none has been found in that context so far (which doesn't say much since so many barges have been dismantled).

I think so, too, Bernita.

Having spent a week on a narrow boat last winter, I think that is a remarkably civilized way to travel.

Thirty years! Amazing! Most wooden ships out of the salt water don't last that long! The rot sets in too quickly!

Fascinating post, thank you. You have to hand it to the Roman Army for managing logistics.

Stag, more fun than crowded interstates, I'm sure.
The boat in question may have been an exception; I don't think they were all kept 30 years. It probably depended on the repair cost / building a new one-ratio. But it's certainly not true what had been assumed by some researchers that those barges were one way articles, only to be reused in some dyke or wall construction. Some of them were recycled, yes, but I'm sure after some time in service.

Carla, I suspect the Romans loved paperwork a bit much and that's why their logistics worked, too. ;)

Superior culture at governing and organising better than anybody else back then, but probably very superior to scores of states today.