9 Jan 2011
Limes Fort Osterburken - Part 4: The Annex Fort
The Osterburken main fort (the cohort castellum) was built about AD 155. As a feature unique to the forts of the Limes, an annex fort was added some time between AD 185-192, during the reign of Commodus. A building inscription mentions the Legio VIII pia fidelis constans, a legion stationed in Strasbourg (Argentorate). It got the honour denomination constans (=steadfast) after it withstood a siege of a rebel force in AD 185. Another interesting aspect of the inscription is a scratched C with several following letters missing. The name could have been Commodus (of 'Gladiator' fame, though the movie got more things wrong than I want to think about). He was condemned to damnatio memoriae after his death, that means his statues were destroyed and his name ereased from inscriptions. Someone obviously took a chisel to the building inscription in Osterburken. 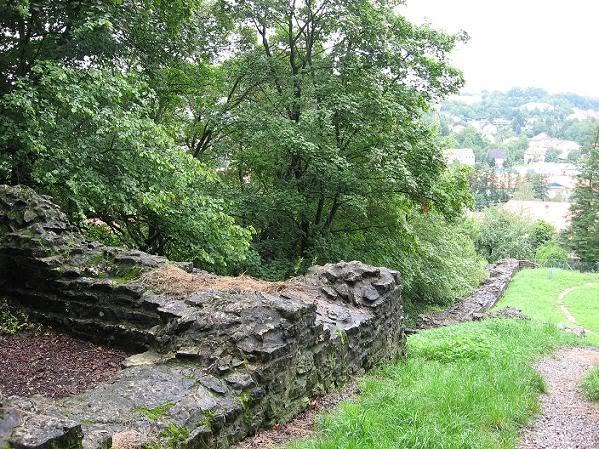 View from the west gate down into the valley

One reason to build an annex may have been the geographical situation of the fort. The Limes runs in a very straight line here with no consideration for the terrain. Osterburken lies on an alluvial sand depository in the Kirnau valley; behind the fort the terrain slopes upward the Hundsrück hill and thus gives an advantage to possible assailants who could throw pointy things into the fort from above. Although no traces of ancient roads have been discovered so far, Osterburken must have been a major knot the road and relais network, as the cove of the beneficarii proves. Thus there were good reasons to build the fort here and not somewhat further south where the Kirnau valley broadens and the terrain would have been more suitable.

Another reason to erect an annex fort on the slope may have been the need for a larger garrison. There was an interesting find in the southern trench of the main fort: two burnt layers, one dating prior to the buidling of the annex (coin finds from the time of Trajan to Marc Aurel, AD 161-180) so the annex could have been an immediate reaction to an attack; the second one dates to after AD 244 (Gordianus III, see below). 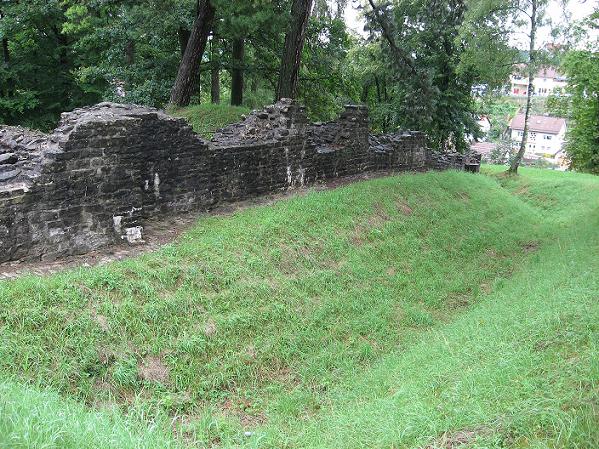 The trench in front of the south wall
The rock of the hill is shelliferous limestone (Muschelkalk), a geological formation typical for Middle Germany. It forced the Romans to go for an irregular trapezoid layout of 186 metres (adjoining the south wall of the main fort) x 86 (west wall, with an incline of 22 metres) x 99 (south wall) x 143 (east wall, with an incline of 20 metres) that covered 1.35 hectares. The three sides had gates protected by towers, and there were additional towers in the corners. One trench surrounding the annex has been proven, but there may have been a second one, at least along the most vulnerable south wall.

The walls were built in the usual bivalve technique with two walls of hewn stones, filed with a mix of pebbles and opus caementicium. The east and west walls are about 2.40 metres deep, the south wall only 1.60 metres, but it had several additional towers. 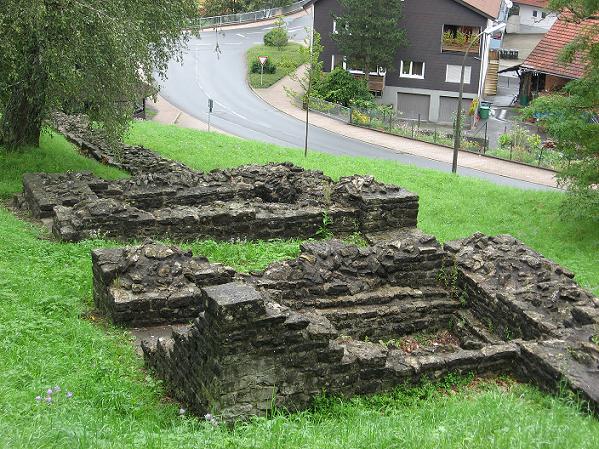 Remains of the east gate
The gates were single winged and less than four metres wide; a significant difference to the double gates of main fort, though they still had two towers each. But the most interesting discovery is a burnt layer on the way into the east gate, and traces that both the east and south gate had been walled in at some point. So the fort must have been attacked though not conquered (because the burnt layers are only local and don't cover the entire area). The gates probably were walled in as a result, or, if you prefer a more dramatic scenario, during the siege by using stones from the interior buildings.

The connection with the cohort castellum is a bit of a puzzle. The trench remained; it only was walled in at the sides, but there is no trace of a dyke or stone bridge crossing the trench. A wooden bridge thus is the most likely connection. There must have been such a connection at least after the doors of the annex fort were walled in. 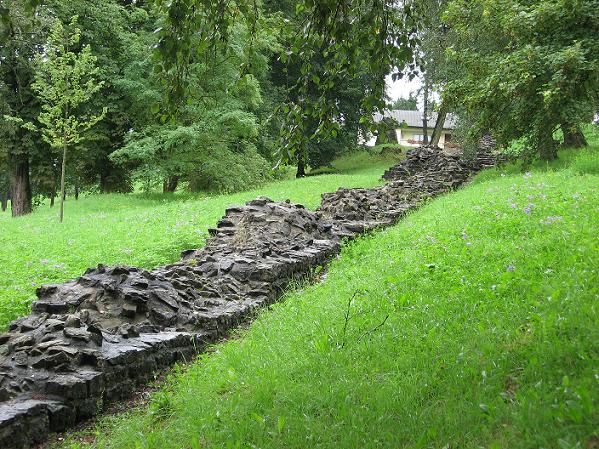 Annex fort, foundations of the upper east wall
Almost no traces of the interior remain though there may still be some foundations underneath the park and the WW1 monument that today cover the place. Some foundations on the north side I had thought to be a gate but Neumaier lists them as unidentified. The annex fort was an independent unit and must have had its own headquarter, albeit a smaller one considering the fact that the numerus garrison was led by a praepositus, a seasoned centurion, not by an officer of equestrian rank with a larger staff. Neumaier thinks the middle part of the annex was free of buildings because of the steep slope, but examples like Housesteads show that the Romans built according to their layout no matter the terrain. Neumaier/Schumacher did not interpret the northern foundations as part of the principia (they surely are not barracks or granaries because those are easy to identfy), thus the location of the principia remains unknown. 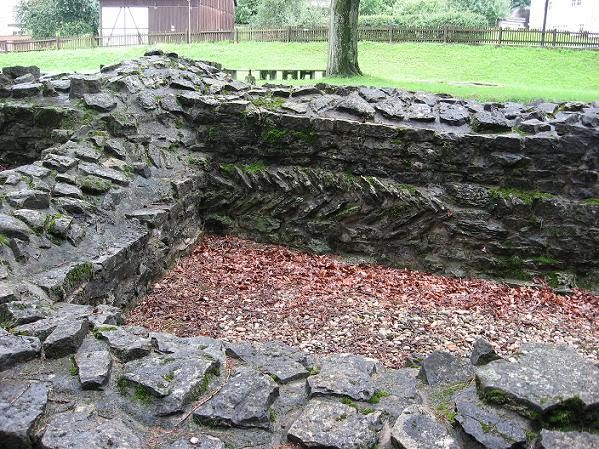 Guard room in the south gate
(The stones are laid out in a decorative herringbone pattern)
The second layer of burnt material in the main fort trench I mentioned above includes coins from Julia Mamea († 235) to Gordianus III (†244), the latest coin found inside the fort had been issued by Philippus Arabs (244-249). During that time the second baths outside the fort belonging to the annex had been reduced in size which may infer a reduced garrison. The walling in of some the gates (both the annex fort, and wings of the cohort castellum gates) could point in the same direction; less men are required to guard them.

The age of the Soldier Emperors which started with Maximinus Thrax AD 235 was a mess with several civil wars, and most of the emperors stayed in job shorter than the coach of a losing soccer team. Troops were called off the borders to be used in those fights for power and the Germanic tribes, most notably the Alamanni, attacked the undergarrisoned Limes. 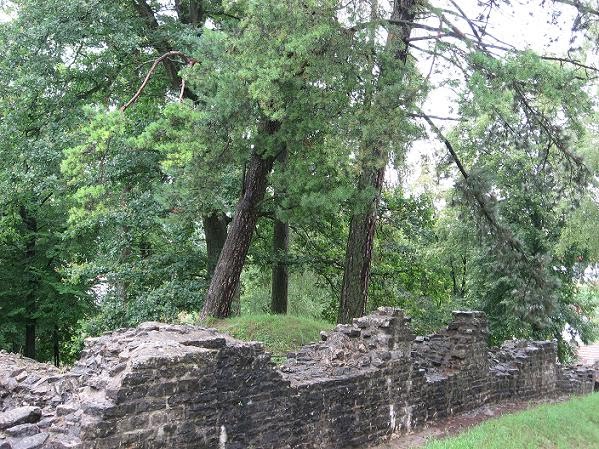 South wall
We can't say for sure if the burnt layer at the east door of the annex is the result of the same attack that also caused a layer of burnt material along part of the south wall of the cohort castellum. Since the trench was connected to the annex by walls on both sides, the latter would imply that the Alamanni somehow climbed or destroyed that wall in which case there should be more damage in the annex (which would have been unprotected from the north) than has been foud. But as mentioned, the interior of the annex has never been thoroughly researched. It could well have been that the annex was abandoned and the main fort still held against the assailants.

What we do know is that the Alamanni used the fort in the 4th - 6th centuries. Several Germanic fibulas, two swords, and a number of agricultural tools have been found as hoard hidden in the south trench of the annex. One can therefore assume that the Roman defense structures were in sufficiently good condition to attract some thane of the Alamanni to make the annex fort his seat. So even a scenario that connects the burnt layer at the east gate of the annex, together with the deposit find, to some strife between different groups of Germans - fe. Alamanni against Franks - is possible.   ¶ January 09, 2011

Comments:
The 'fire layer' or 'layer of burnt material' are my attempts to translate the German word, Brandschicht for which I didn't find a translation. Or did you just steal the German word? *grin*

Wow, those are some ruins! Impressive!

We may have stolen your word: most archaeology I can think of would call that ` a burnt layer'. By way of exchange, let me offer you the word `herringbone' for that fish gill pattern of stonework there; I think that's the word English would usually use for that...

Kathryn, they look even more amazing in the original. More the pity that the remains of the cohort castellum were built over. But the foundations of the second baths remain; I'll get a post up about those at some point.

Jonathan, thank you for the tranlsations. I changed the words in the text to 'burnt layer' and 'herringbone pattern'. I have no idea why such words aren't in the dictionary I have, or to be found online; they're not that exotic. ;)

Wow that gate seems a lot smaller than I imagined a gate to be. Too much movie influence on me, no doubt.

Well, it's a single wing gate. Most gates had two doors, and movies would show those, of course. ;)