18 Mar 2011
The Wartburg, Main Seat of the Landgraves of Thuringia - A Virtual Tour
I was doing some research on the landgraves of Thuringia to go with the Ebersburg photos, and that gave me the idea to revisit their main seat, the Wartburg, which is in driving distance. And I want to show you that we not only have kaput castles in Germany but some intact ones as well. :) 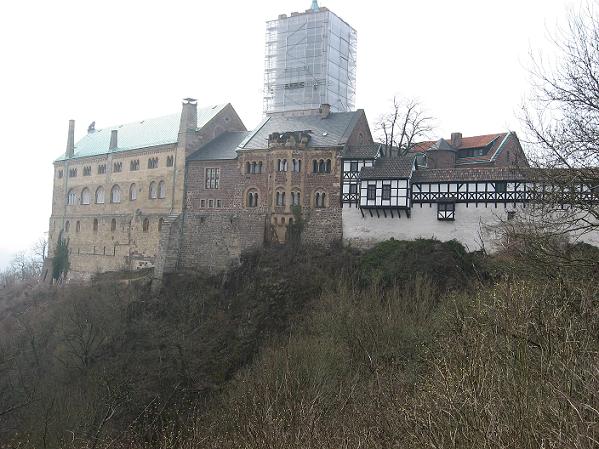 Wartburg, eastern front.
The buidling to the left is the 12th century palas, followed by the 19th century keep;
the half timbered part is from the 15th century on older foundations

We'd been there shortly after the Wall fell, and the place was stuffed to the brim with tourists who got the same idea. The castle had been preserved during GDR times because it played such an important role in German history. Well, there were fewer tourists this time since it's not yet holiday season, but there already were international; groups from the US, Mexico, and France. A few Germans, too, but we were outnumbered.

The Wartburg, today part of the World Heritage, combines buildings from the 12th, the 14th and 15th, and the 19th centuries. The rooms can only be visited by guided tours and thus I could not avoid to have some people on those pics, but it was much better photographing than last time, overall. So here's a little illustrated tour to give you some first impressions. 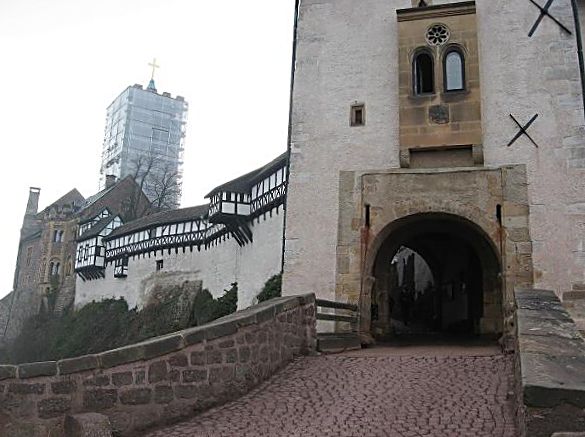 The outer gate
There's a parking lot some way up but we (my father and I) still got to do some climbing. German hilltop castles are good for your health, lol. You get the first view (photo above) from the former bulwark, the outermost fortifications that had been dismantled in the early 19th century.

The Wartburg sits on a 200 metres high promontory overlooking a former trade road near the town of Eisenach. The oblong site covers an area of 45x80 metres and can only be accessed from the north; the other slopes are too steep. It's the sort of place that called for a castle in the Middle Ages.

The castle was founded by Ludwig the Leaper some time between 1067 and 1080 (it is mentioned in Bruno of Merseburg's De bello Saxonico in context of the war of the Saxon nobles against Heinrich IV). No traces of this first castle have been found; it most likely was a timber construction protected by earth walls which was not that unusual for the time. 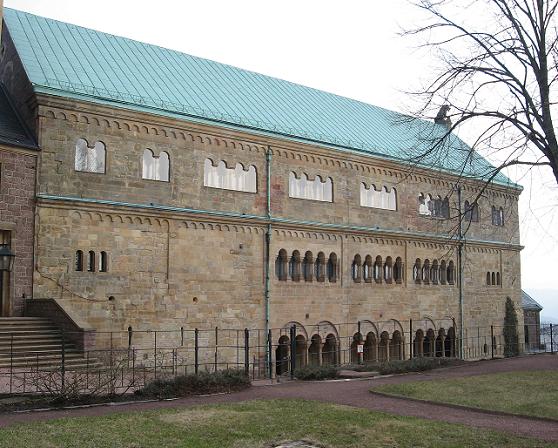 The Romanesque palas, seen from the yard
The next important step in the development of the Wartburg took place in 1158 when Landgrave Ludwig II, son in law of the Emperor Barbarossa, built a palas, a representative house with living quarters and a hall, in Italian style. The palas remains until today (though the first version had only two storeys) and is one of the most important examples of Romanesque palaces in Germany.

Other features dating back to the time of Ludwig II are the curtain walls and the outer gate. His keep had been replaced with a new one in the 19th century - it had been a ruin at that time. The south tower dates to the 14th century, and the new keep does a pretty good job imitating its style.

More changes were made after a fire in 1317 (the castle already was in the hands of the Wettin family at that time). Besides the construction of the south tower, a third floor was added to the palas, and the chapel moved inside the palas to replace the destroyed one on the castle grounds. 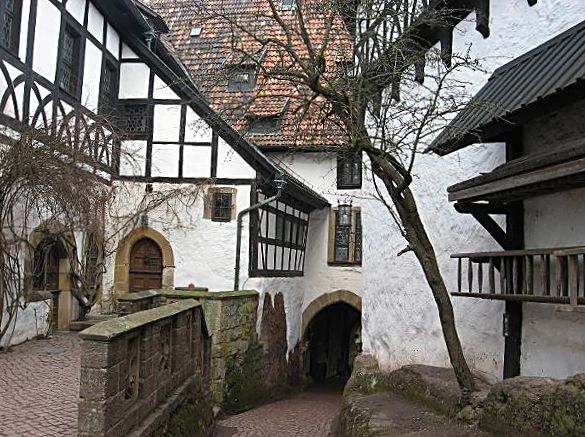 Outer bailey with the bailiff's house (left) and Elisabeth hallway (right)
The half-timbered buildings in the outer bailey or forework (in German usually called Vorburg), the knight's house and the bailiff's house (Vogtei), were added in the late 15th century. The battlements were roofed in and became hallways that connect the buildings of the outer bailey with the - then still existant - old keep and the guest house.

The Wartburg declined in importance and became but a minor residence of the landgraves of Thuringia, but the castle is still considered as 'well preserved' by a chronicler from Eisenach in 1769. A few years later the famous author and minister at the ducal court of Weimar, Johann Wolfgang von Goethe, visited the Wartburg and got the idea to establish the castle as museum for Mediaeval exhibits. 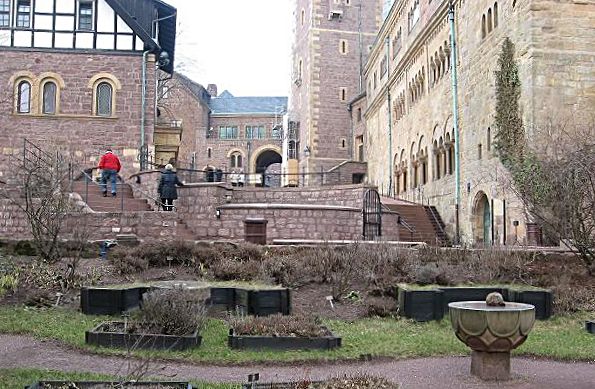 View from the herb garden to the inner yard with the palas and keep to the right,
guest house to the left, and the 19th century gate hall in the background
But it would take until 1853 for the Wartburg to get a makeover under supervision of Carl Alexander Grand Duke of Saxe-Weimar-Eisenach (no, I didn't make that name up). Carl Alexander chose the place as his main residence again. Fortunately, the buildings still intact were preserved and only those in bad shape were replaced with new buildings in old style (Historicism). New buildings are the guest house, the inner gate, and the so-called Dirnitz, a representative house with fire places (a second, somewhat smaller palas, in a way).

Following Goethe's suggestion, Carl Alexander collected Medieaval furniture and artefacts and displayed them in the Romanesque palas. The palas also got a makeover of the interior in the style of Historicism. Most important are the frescoes by Moritz von Schwindt. 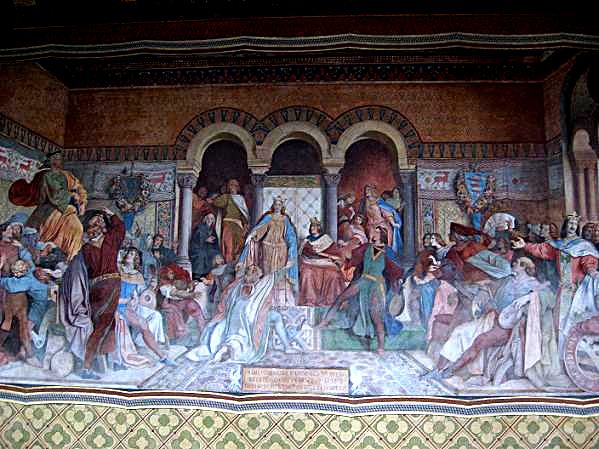 Sängerkrieg fresco in the singers' hall
Several important events took place on the Wartburg. The first is the Wartburg Song Contest (Sängerkrieg auf der Wartburg) in 1206. Landgrave Hermann I was a great patron of troubadours, the Minnesänger, and saw the most famous ones of his time, men like Walther von der Vogelweide, Wolfram von Eschenbach, or Heinrich von Ofterdingen, at his court. Legend has it that a contest was held, but instead of giving the winner a contract for some CDs, the loser would lose his head (that would probably increase the quality of the European Song Contest somewhat).

The scene of the fresco shows poor Heinrich von Ofterdingen, who was stupid enough to sing the praise of Duke Leopold of Austria instead of Landgrave Hermann, pleading for grace and be spared the executioner's axe. There's a happy end, of course. The story inspired Richard Wagner to his opera Tannhäuser (1845). 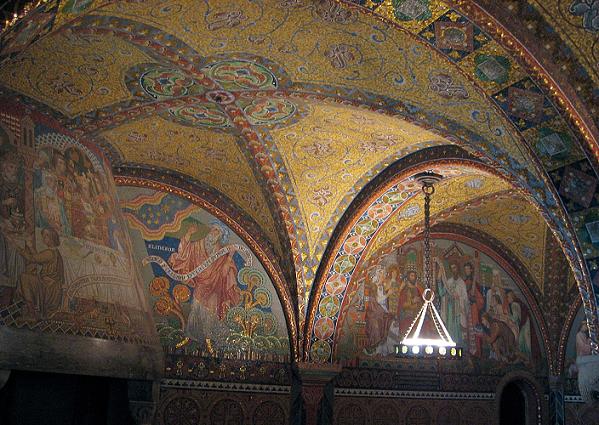 Elisabeth's chamber; mosaic ceiling
Another event that left strong traces in the 19th century decorations is the fact that Saint Elisabeth lived on the Wartburg 1211-1228. Elisabeth von Hungary was the wife of Landgrave Ludwig IV. She lived in the ascetic traditon of Francis of Assissi even though her charity and poverty went far beyond what was expected of a noble lady. After her husband's early death she moved to Marburg where she died of exhaustion (or anorexia, is my guess) at the age of 24.

There is a chamber, today called Elisabethkemenate, in the palas that was decorated with mosaics in a mix of neo Byzantine and Art Nouveau style in 1906. Emperor Wilhelm II liked not only the Romans but the Middle Ages as well and paid for the shiny fun. The artist who did the work was August Oetken. Some of the mosaics - 4 million tiny glass pieces - show scenes from Elisabeth's life as well. 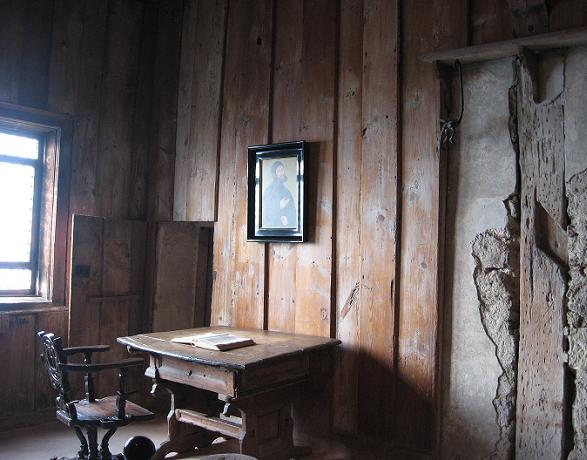 Martin Luther's room
Much less sparkly but historical is Martin Luther's chamber in the bailiff's house. Luther (born 1483) had gotten himself deep into trouble with his anti-indulgence theses and other 'heretic' texts when he was called before the diet of Worms in 1521. Of course, he refused to renounce anything he had said and thus was declared outlaw by Emperor Charles V after he already he been excommunicated a few years before. But Luther had one stout supporter, Friedrich III Elector of Saxony. Friedrich had Luther spirited away to the Wartburg where he lived in disguise for ten months and used some of the time to translate the Gospels - in their Greek version - into German.

Legend has it that Luther was visited by the devil one night and could only get rid of him by throwing an ink pot at the intruder. Maybe it was the vision of an overworked and frightened man, maybe it was just a good story embellishing Luther's remark that he had 'fought the devil with ink'. Whatever, in the following time there was an ink stain at the wall and Protestant pilgrims used to chop off little bits of the roughcast as souvenir. The stain was renewed a few times but by now that has stopped (thought a somewhat damanged part of the wall is left behind). 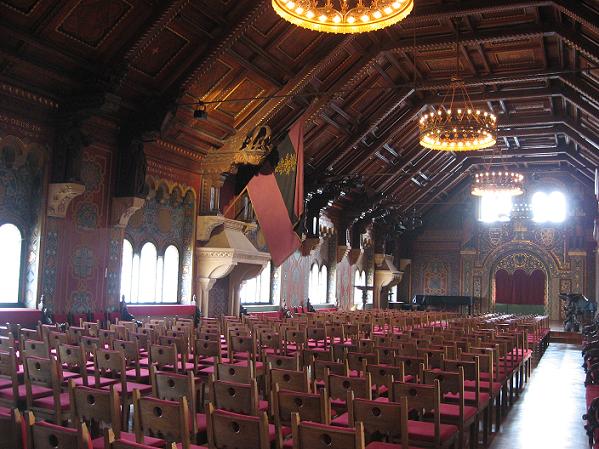 The great hall
Another fine example of Historicism is the Rittersaal, the great hall in the uppermost floor of the palace. The building itself is from the 12th century, but the trapezoid wooden ceiling as well as the decorative paintings are 19th century. The hall, as well as the chapel, are used for concerts today which is the reason for all the chairs. Wagner's opera Tannhäuser is played here in summer, but tickets are sold out for several years in advance.

Ludwig II of Bavaria used this hall and the singers' hall as models for some of the rooms in Neuschwanstein Castle. 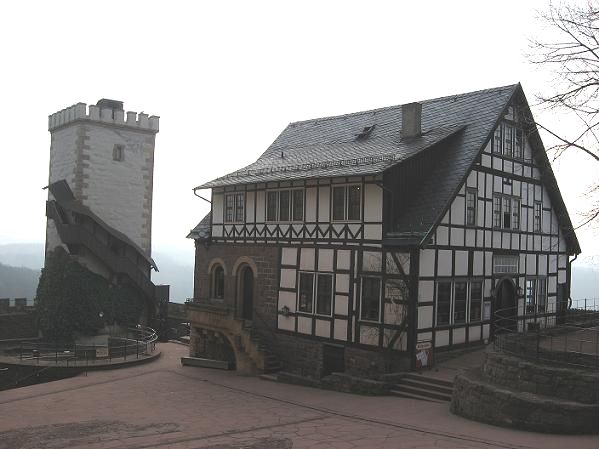 The guest house with the south tower in the background
OK, time for a piece of cake and a cup of tea in the guest house, I think. We'll visit the museum in the Dirnitz the next time. :)

The guest house is from the 19th century as well, built on the foundations of the old stables. Its half timbered style corresponds well with the buildings in the outer bailey.

Comments:
It is nice to see an intact castle for a change (although the x's on the front gate just scream: Catapult rock here...).

I love the picture of the great hall, really puts the size in perspective for me. Thanks!

You'll have to get a catapult up that hill first. :P

Yeah, the whole palas is an amazingly large building. The six rooms in the two lower floors together make for a nice little house of 300 square metres living quarters. With underfloor heating. :)

Beautiful, I want one!
Thank You.
http://woodsrunnersdiary.blogspot.com/

That garden is fantastic.

Looks like it was a good hike from the parking lot, it it doesn't kill you great for the heart.

Le Loup, and the staff to keep the place tidy. ;)

Kathryn, you should be able to hunt down some nice Fachwerkhäuser in Germany. The smaller towns along the Middle Rhine got them, for example.

Hank, my father and I take the climbing slowly. The doc told him it was good he had a daughter chasing him up some castles. :)

What a beautiful place! And I was particularly interested in the reference to Martin Luther, as I remember studying him in-depth for A level European history, and the time he spent hidden away.

Anerje, the room is pretty much the same Luther lived in, only the copy of the Cranach protrait showing Luther after his hair and beard had grwon out, was put up later.