5 May 2011
Huskies
One more picture post before we go back to the regularly scheduled posts about castles, cathedrals and Romans. It's just that I have so many photos that I could put up pic spam every week. :)

These are from the dog sled tour I took near Kirkenes. Because I'm sure you'll like some cuddly Huskies. 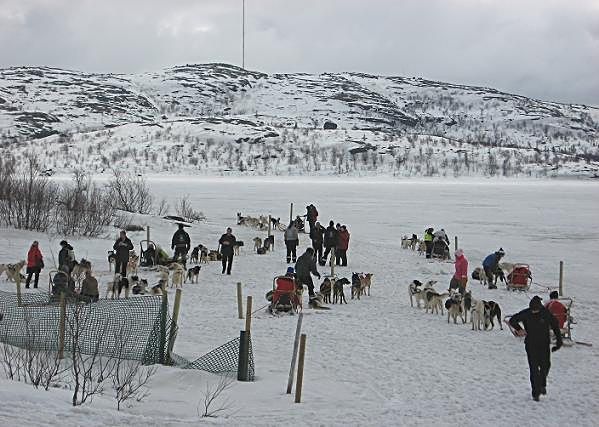 Where are those tourists? We want to play.

This blog should come with sound. All those huskies (and some other dogs among them) made a lot of noise, barking and yipping like mad. But they were very friendly dogs. 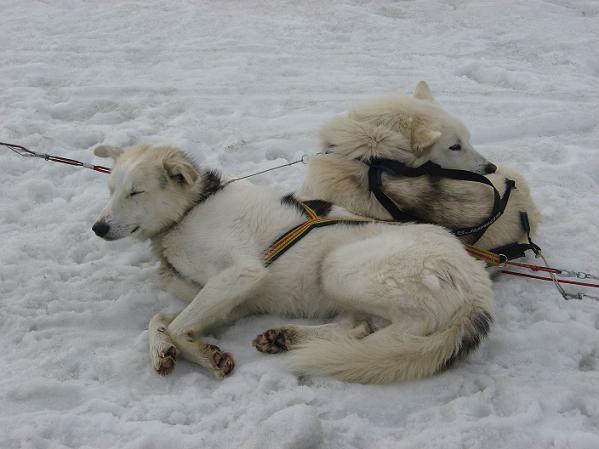 Nay, we want to have a little nap.
A few took it a bit more relaxed in between the rides. One tour is about an hour and they had two turns in the morning; this doesn't seem much for dogs that run for hours on expeditions. 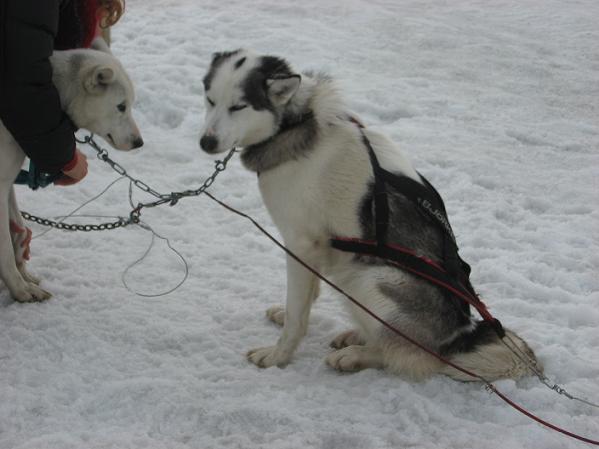 Lazy sods, those are.
The snow conditions weren't very good since it had thawed a bit the days before so the snow was sodden. This was the reason I decided against trying to guide the sled myself; it takes an experienced musher in conditions like this.

But there's still a lot of snow that far north. 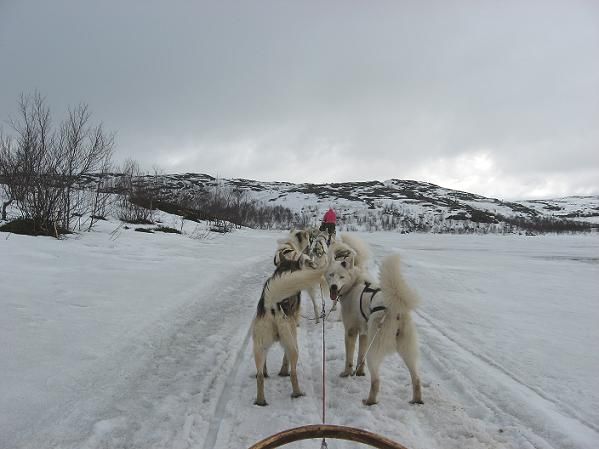 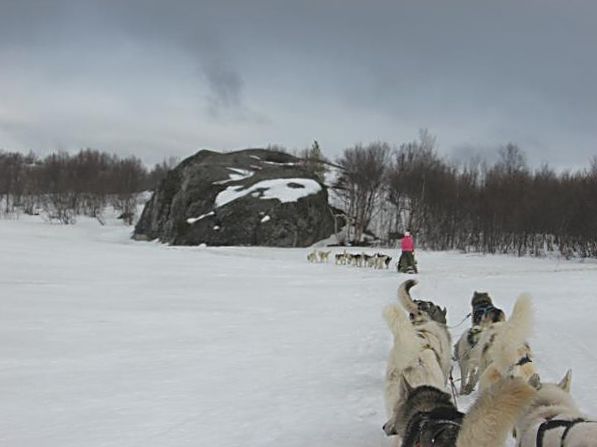 Hey pal, whaddaya think the tourists are here for, us or the landscape?
I can ensure you I came for both, my tail wiggling friends.

The landscape is rather flat near the Russian border, with gentler hills, and some rivers and lakes. The lakes were still frozen and part of the trail went right across one. The last ice age left a bunch of boulders behind, and there are spruces and pines as well as small birches, but the latter were still bare. 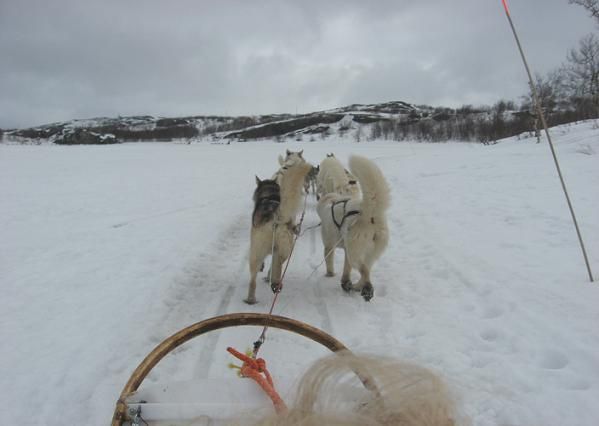 Yipee, that's fun!
It was not so easy to keep on the track in the wet snow, but only one other sled capsized. Sitting comfortably in a sleigh and having someone else do all the steering and balancing is a nice way to travel. 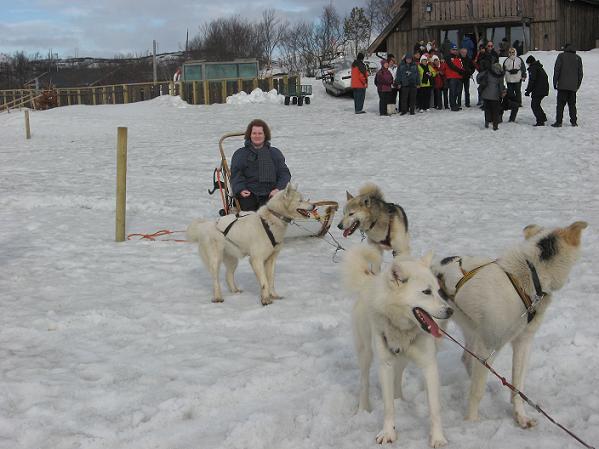 Yes, it was fun, wasn't it, pal?
It was one of the coolest things I did during my tour. And it wasn't too cold, either; I had actually counted on colder weather. Looks like the dogs enjoyed it as well.

And now, all together: Aawwwww. 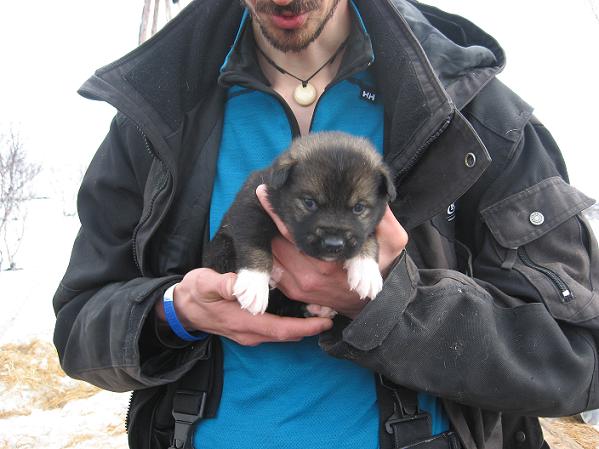 One of the pups
Who can resist Husky puppies? Though - very sensibly, imho - there was a fence, so tourists couldn't pet the pups; it might have irritated them else. You could pet the adults, though.   ¶ May 05, 2011

Comments:
I can't resist cuddly huskies! Friends of mine did a similar holiday to you also visited the huskies - and got to pet them:>

Oh man, what an awesome post! I love huskies. That is so awesome that you got to do this!

While I love seeing your posts of ruins, cathedrals and castles, this one was fun to see and I'm sure you had a great time! I've always been amazed at this tradition and means of transportation and marveled time and again over these dogs. Huskies are a popular breed in our new home (Washington State), so our Corgis - who wouldn't know how to herd a cow to save their little lives - seem a little small and silly. Thanks for sharing!

Anerje, I got to pet them, too. And get dog slobber on my face. As I said, they're very friendly, somewhat goofy dogs. :)

Vicky, it was a lot of fun. I could imagine doing a longer tour that way.

Elisabeth, but Corgis are royal dogs. :) And really cute. Constance from my blogroll sometimes posts about her corgis.

BTW, cool new blog about Lymond Crwaford you started there.

It was fun, Hank.

fifty five years a Canadian and I have NEVER ridden a dog sled.

Will have to remedy that.

Wonderful! That looks like so much fun! Love the pics, nice to get a different perspective on the world - even if it's a back end view. :)

Huskies are gorgeous. Where do they get all that enthusiasm from?

Awwwwww, what lovely pics of the huskies!

Carla, makes me wonder. But my niece got the same level of energy. :)

Love the Husky pics. Used to have them as a child, and have always wanted to go sledding. I'm green with envy! ;-)

That's me holding the little puppy and I'm still here far way north :-) That puppy is named Helga and now much bigger and quite active... nice to see that you enjoyed ur trip!
greetings from kirkenes,
michael the musher

Nice to see that you liked your trip with us :-) I'm the guy that showed you the pupps - this puppy ist named Helga but they're much bigger now and way more active... I'm still here in kirkenes with 'my' dogs and no one can get me away from here.... :-)

Hi Michael, thanks for visiting my blog. Yes, I really enjoyed the trip; thank you, guys and gals. I can imagine the puppies are much bigger now - dog teenagers up to all sorts of mischief, is my guess. ;)