5 Jun 2011
Castles of the Welsh Princes - Criccieth Castle 2: King Edward's Buildings
Edward's conquest of Wales should get its own post because he's to blame for some of those big castles I visited, but I'd need to find some reliable books or essays to draw upon. Well, here's a short version for starters.

Despite the Treaty of Montgomery, Llywelyn ap Gruffydd continued to face troubles with his Welsh neighbours (esp. the princes of Powys and Deheubarth) who didn't like being the vassals of another Welsh prince; the English Marcher lords who kept trying to nibble bits off Wales; and his brother Dafydd who, like any good Welsh brother, tried to kill Llywelyn and, when the plot failed, ran off to the king of England. 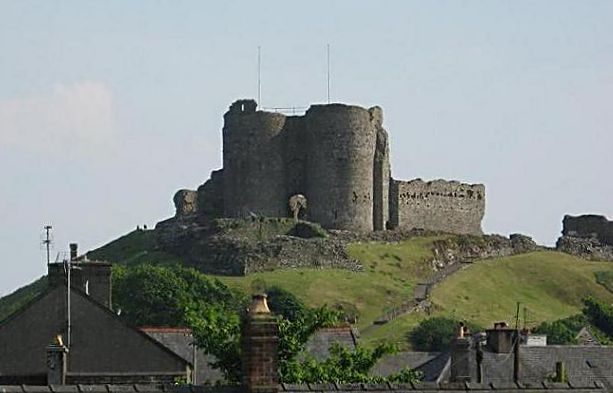 Criccieth Castle seen from the town

When Edward I ascended to the throne and summoned Llywelyn to renew his oath of fealty, Llywelyn replied that Edward should first address his grievances about Marcher lords and hiding brothers. From Edward's point, Llywelyn's refusal to swear fealty was, of course, treason. Moreover, Llywelyn was planning to marry Eleanor de Montfort, a daughter of that rebellious baron.

So Edward kidnapped Eleanor, took her into royal custody, and declared war on Llywelyn in 1276. Several of the Welsh rulers fell over each other to make peace with Edward (isn't that so Welsh?), and so the King of England could surround Llywelyn's lands and force him to surrender without too much trouble. The treaty of Aberconwy restored more or less the situation of the 1240ies: Llywelyn's possessions and feudal influence were reduced to the lands of his family, he had to pay out his brother's share in the heritage, accept the king's right to build castles and overall was reduced to a vassal at the king's beck and call, though he was allowed to keep the title Prince of Wales and marry Eleanor. 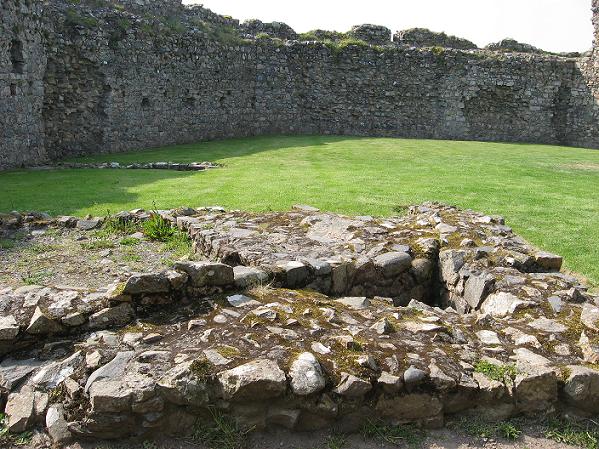 Inner curtain wall seen from inner ward
Edward could have had peace, but he overacted his authority and hammered it home to the Welsh lords who was boss. Plus he sent his lawyers in and they did what lawyers do best: dragging out processes and finding loopholes to use English law instead of the Welsh one. By 1282, Edward I had managed to alienate pretty much every Welsh noble in the area he had conquered a few years earlier; including Llywelyn's brother Dafydd. This second war - not a punitive expedition like in 1276, but a war of conquest - would not be an easy win for Edward; he had to fight for every castle and every path in the mountains because the Welsh had realised what was at stake.

Unfortunately for the Welsh, Edward could draw upon military ressources and money not all the Welsh chiefs combined could muster, and he was a skilled commander who went on his campaigns very methodically. Nevertheless, it took Llywelyn's death in an ambush for the Welsh resistance to break. Dafydd was captured and exedcuted by quartering soon thereafter. The war ended with a complete conquest of Wales in June 1283. In the following year, the Principality of Wales was incorporated into the English system of administration with counties policed by sheriffs, and English settlement in Wales increased. 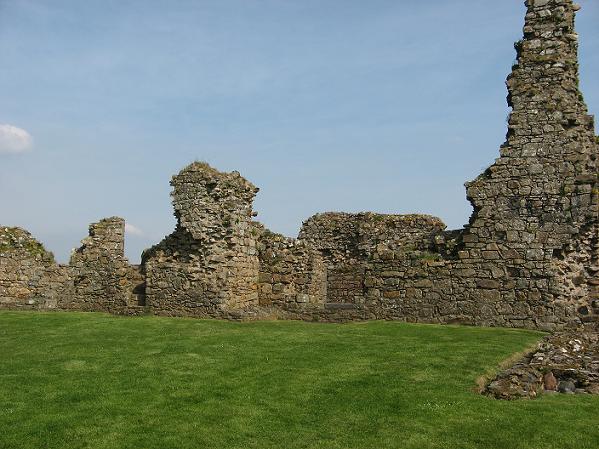 Outer ward
Edward had started to build castles in northern Wales already after 1277 (like Rhuddlan and Aberystwyth) but now he planted some real monsters: Caernarfon, Conwy, Harlech, Beaumaris. I've already introduced you to the man tasked with building those castles: Master James of St.George. Edward had been on a crusade, and so he and his leading architect introduced some features from the castles in the Holy Land, like arrowslits (thus those may have been part of the later additions to the gate towers in Criccieth) and the concentric layout.

Criccieth was taken by English forces in 1283, and renovated and extended (a job that was finished only in 1292). Master James got £ 500 for the task, a considerable sum at that time, which proves that Edward saw the strategic importance of the castle. 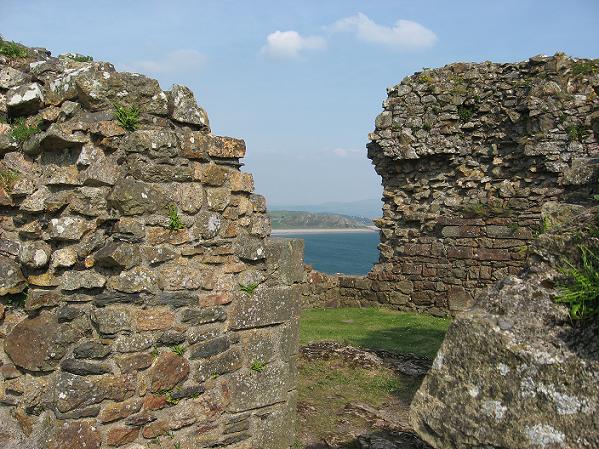 South-east tower (Leyburn Tower)
Among the added features was another tower adjacent to the wall of the inner ward, Leyburn Tower, which overlooked the northern gate. The main gate towers had another storey added, and the so called Engine Tower was either built or at least refortified by Edward (or rather, Master James).

The Engine Tower and the northern curtain wall are subject to some discussion about whether they were already built by Llywelyn ap Gruffydd or date to the time of Edward. The curtain wall extends the landward protections of Llywelyn the Great in a seamless way and thus could well date to his grandson's additons; after all, Llywelyn ap Gruffydd also added the seaward curtain wall and outer bailey at the south side. It would then have made sense to build a tower in the outermost corner, thus dating the first version of the Engine Tower to Llywelyn. The massive structure we can see today dates to the time of Edward, though. 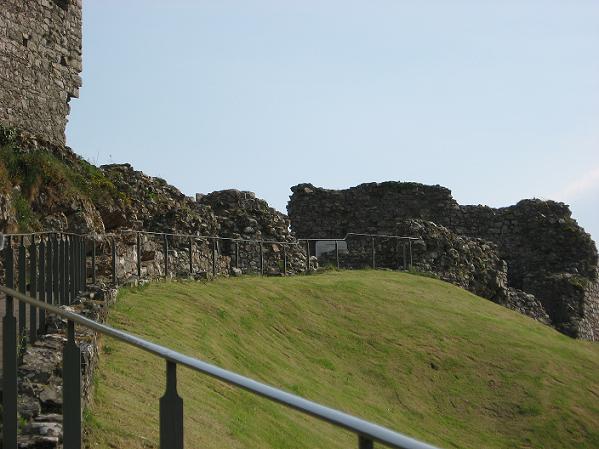 Way along the landward curtain wall with view to Engine Tower in the background
The tower got its name because it served as foundation for a catapult that could reach any attackers from the land side, and that was an Edwardian feature as well. Siege warfare became more important, and more deadly.

As mentioned in the first post, the principial residence during the times when members of House Aberffraw lived in the castle had been the south-west tower. But with the added storey under Edward, the main gate towers also became the main lodgings, and timber buildings, including a great hall, were erected in the inner bailey - one may wonder if they were planned to be replaced by stone buildings like in Caernarfon; though in both cases that step was never made. 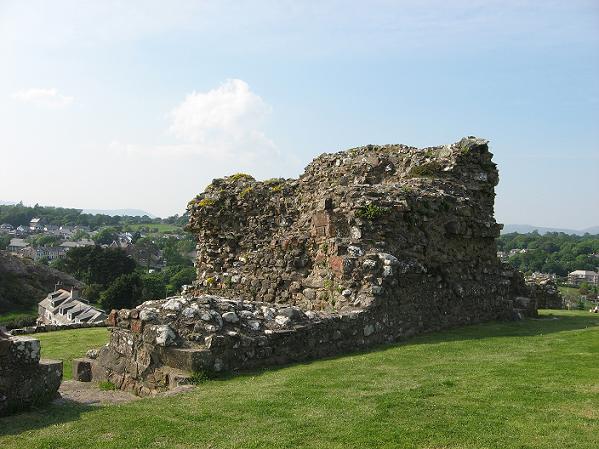 Remains of the Engine Tower
You didn't think the Welsh would meekly accept English overlordship, big castles or no, did you? Well, you're right. Two years after Criccieth Castle had partaken in the House Overhaul Program, a distant relation of Llywelyn ap Gruffydd, one Madoc ap Llywelyn (he styled himself Prince of Wales), rose against the English. The rebellion quickly spread - Edward still hadn't learned how to make friends, it seems - and several towns were razed, Caernarfon taken; the castles of Criccieth, Harlech and Aberystwyth were besieged. The English garrison at Criccieth could hold out because they got supplies by sea. But this uprising ended like the ones before. Edward managed to win the battle of Maes Moydog, Madoc was taken prisoner, the English sheriffs, lawyers and tax collectors reinstalled in Wales .... and the next Prince of Wales would be English: Edward II, born in Caernarfon Castle 1301. 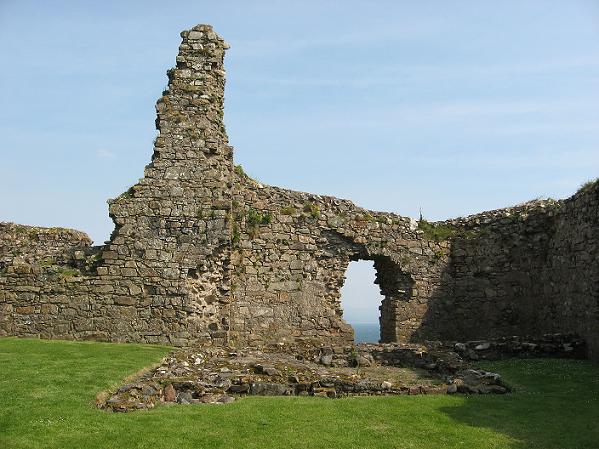 Outer gatehouse seen from outer ward
Criccieth was captured by the Welsh in another rebellion, though, that of Owain Glyndŵr which lasted several years (1400-1412). This time the garrison could not get resupplied by sea because Owain had the support of the French and a nice little fleet at his disposal. The castle fell in 1404 and was partly destroyed - there are still some scorch marks to be seen.

The rebellion was put down by Henry IV after the French had withdrawn their support, and Owain Glyndŵr vanished into the Welsh mountains and legends. Criccieth obviously lost its importance as coastal fortress and mostly disappears from the sources. It was in possession of the Lords of Harlech until 1933 when it came under the protection of the CADW trust.

Comments:
Just been reading about Llewelyn and Eleanor. Lovely photos! (as usual).

That was a marriage I wonder about, after all, Llywelyn was 30 years older than his wife. And poor Eleanor, getting kidnapped on the way to her wedding - or maybe she thought it was a good thing. Will we ever know?

To bad so much of it is in ruins, it must have been majestic in it's hayday.

Interesting stuff. :)
(Looks like the engineers already beat up on that poor castle)

Speactacular photographs (as ever). The amount of work that must have gone into building the fortifications is mind-boggling. Knocking it down can't have been an easy task either.

Thank you Hank. Yes, the castle must have been pretty impressive, judging form other castles that are less badly ruined (Caernarfon, Beaumaris).

Constance, not so much engineers as some REALLY angry Welsh. :) The castle held an English garisson since the time of Edward I, after all.

Thank you, Carla. Considering Master James was tasked with building and refortifying a dozen or so castles in Wales, the castle program of Edward is amazing (even though I don't particularly like the man).

Great post on a great castle! But it's making me bristle with rage when I think of the dreadful way Eddy I treated the mortal remains of the Welsh Royal Line!

Oh definitely. I'm fascinated by the architecture of the Norman castles, but I'm so not a fan of Edward I and some other Norman lords in Wales.

Don't like the way Eddy treated the Scots, either.