7 Apr 2012
Only the Keep Remains - Grubenhagen Castle
Not much remains of Grubenhagen Castle, only the - partly restored to its former 18 metres - keep, an 19th century stable, and traces of the trenches around the outer ward. Nor could I find much reliable information that is supported by more than one source about the place, either. 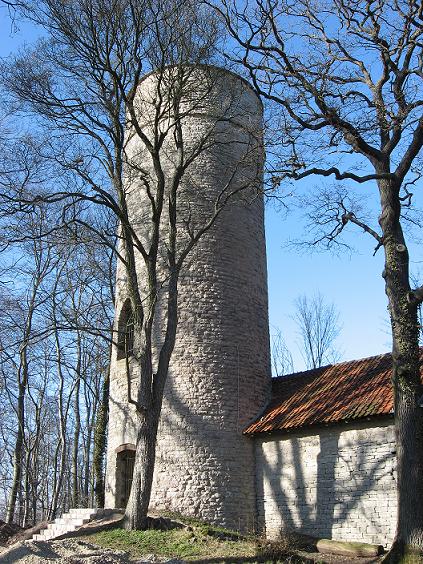 We don't even know who built the castle - the most likely candidates are Heinrich the Lion of Saxony, or Count Rainald of Dassel. The Dassel family held the lands of what today is called the Solling which bordered to lands held by the Welfen, so the confusion may be understandable. Possessions in such border regions often changed and the castle is mentioned in chartes only at a later time. Rainald von Dassel, Archbishop of Cologne, was the Imperial Chancellor (Reichskanzler) of Friedrich Barbarossa, one of the emperor's most trusted men until his death in the malaria epidemic during the unfortunate Italian campaign in 1167. His brother Ludolf fell in a battle in the same war. Duke Heinrich of Saxony had refused to participate in that campagin; as a result his relationship with the emperor soured which ultimately led to his downfall and exile.

Whoever built the castle (or rather, commissioned it; I very much doubt Heinrich or Rainald personally carried a single stone up that damn slope); in the 13th century it is in the possession of the dukes of Braunschweig-Lüneburg and held as chatellains by the Grubo of Grubenhagen, a famliy from the ministeriales nobility. One of the Welfen sidelines took their name from Grubenhagen Castle though it never was their main seat (that was the Heldenburg in Salzderhelden). If anything this may be the one argument in favour of Heinrich the Lion having built the castle, because that would put it into the fold of ancient allodial possessions of the Welfen, no matter whether the counts of Dassel may have held it during the time of Heinrich's exile. Sure, the family took the name only in the early 17th century, but it's still strange they picked an obscure castle over the ones like Salzderhelden or Herzberg where they actually lived.

Grubenhagen was not a very large castle - more a border fortification, as which it may have originally been intended. The inner bailey encompassed an oval of about 63 x 32 metres; of the outer ward nothing remains so we can't be sure about its size. The castle was surrounded by a double ditch and wall on three sides (the fourth is so steep it didn't need any defenses) and an old painting of the castle shows remains of a curtain wall with merlons around the inner bailey. 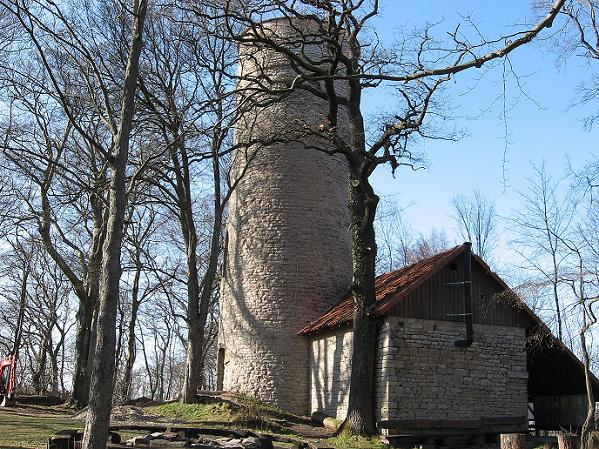 Another view of the keep (with the 19th century stable)

One member of the family who actually spent some time in the castle was Duke Erich I of Braunschweig-Grubenhagen (1383-1427). He was married to Elisabeth, a daughter of Otto the Quarrelsome from the Calenberg-Göttingen line of the Welfen family. Their eldest son, another Heinrich, may have gotten some of his granddad's genes since he started a feud with Landgrave Ludwig I of Hessia. The landgrave laid siege to the castle in 1447, getting two cannons up that hill, but to no avail. His attempt to take the nearby Heldenburg failed as well. But the army pillaged and burned the villages around Grubenhagen castle.

The summer palace in Rotenkirchen was rebuilt in 1520 as an agricultural property; the old castle fell into ruins. The place changed possession within the various lines of the Welfen family a few times over the next centuries. I'll spare you that mess of various Braunschweig-Someplaces. :) 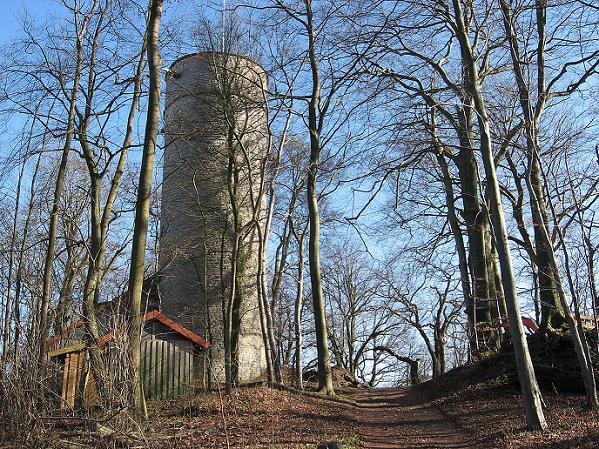 The keep seen from the south gate (well, where the gate should have been)
In 1815, the property in Rotenkrichen and Grubenhagen Castle (what was left of it) came into the hands of Prince Adolphus Duke of Cambridge, Viceroy of Hanover. He was the 7th son of King George III and Queen Charlotte; his granddaughter, Mary of Teck, would become Queen Consort to George V and thus is the paternal grandmother of Queen Elisabeth II. I don't know if the castle still belongs to the family - there's a society taking care of it nowadays.

Duke Adolphus had the main house of the property in Rotenkirchen altered into an elegant hunting lodge and a stable built on the site of the castle - though I don't know why the poor horses had to trudge up that hill instead of being housed in the property stables. The palace was the summer residence of the Kings of Hanover until 1866 but the castle kept crumbling.
¶ April 07, 2012

Comments:
This castle looks extraordinary - the keep dominates it and there is very little else.

Happy easter to you to!

That keep is awesome - not even tempted to knock it down! :)

Constance, I'm sure the society who's working on the maintenance of the keep will appreciate that. :)

Happy Easter, Gabriele! Hope the birch pollen is not too bad.

The keep looks most impressive. Can it be seen for miles around? Restoring it must have been quite a job.

Happy belated Easter! :) Hope you had a lovely weekend.