11 Jan 2014
Highland Landscapes
Here are some landscape photos to tide you over the wait for the next post about Scottish history. 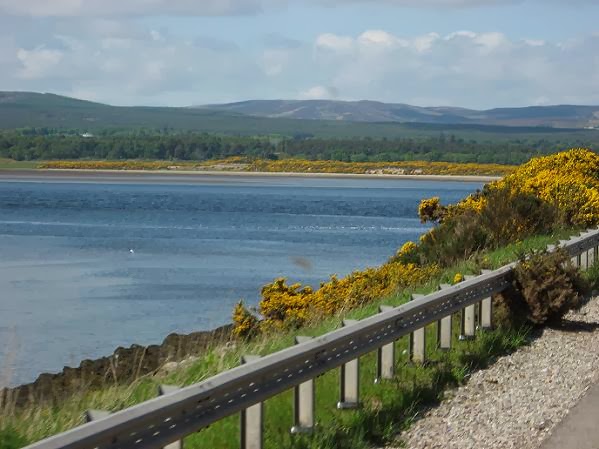 Bridge over the Moray Firth at Inverness
I took all the photos out of the bus, so there may be slight reflections from the window - I got a front seat - and some blurs. I deleted the worst offenders, but the pics are not up to my usual quality. Still, they're pretty enough to share. 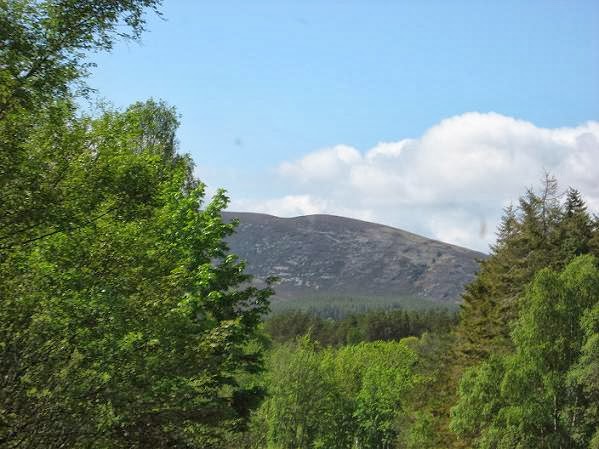 Sutherland landscape
I took the bus from Inverness to John O'Groats to get the ferry to Orkney. And I was lucky to catch a sunny day - yes, they do occur in Scotland. :-) 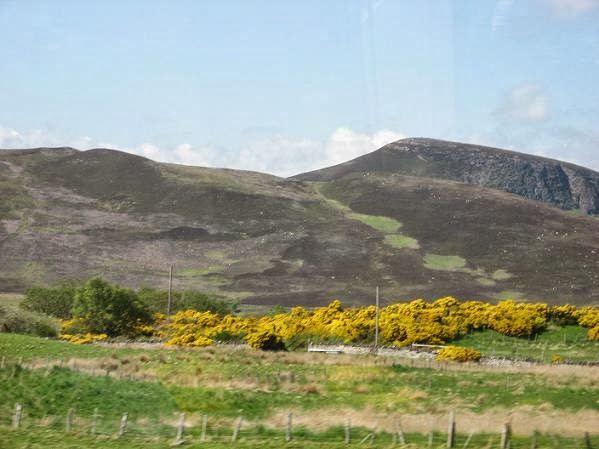 Mountains with gorse in the foreground
The sun made the gorse that was blooming in abundance even more cheerful. In early autumn, the heather on the upper part of the hills will bloom and that must be a pretty sight as well. 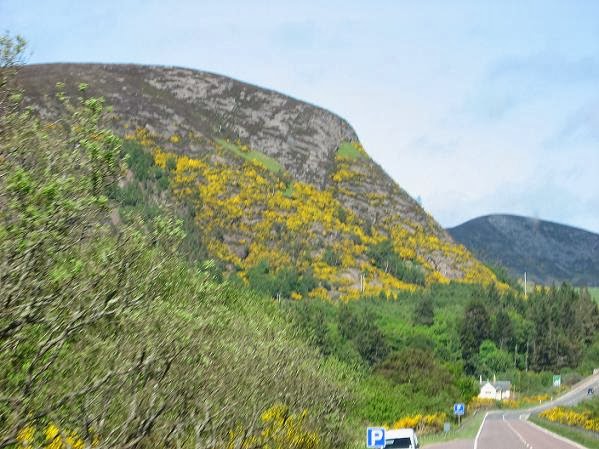 The road winds around the mountains
As we drove further into Sutherland, the mountains became higher and the landscape more rugged. After passing Cromarty Firth, the road goes along the coast for many miles; one of the most scenic routes. 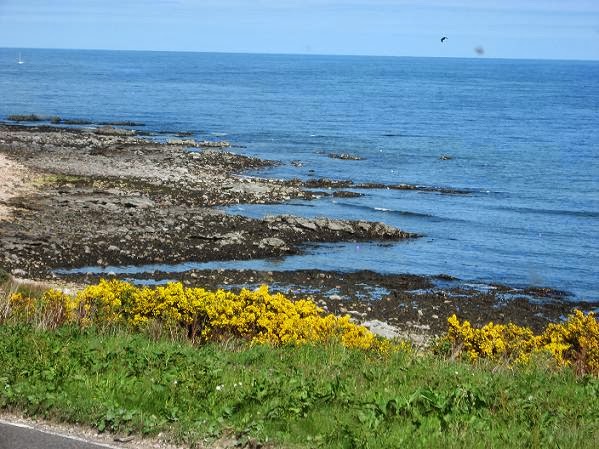 A view of the sea
Sometimes the bus driver alerted me to a particularly nice view, like this one. 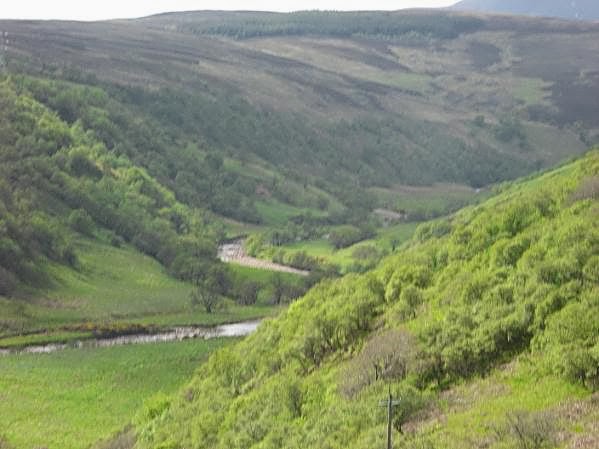 A picturesque valley
And the sea again, this time seen from higher up. The coast is rather steep in many parts. 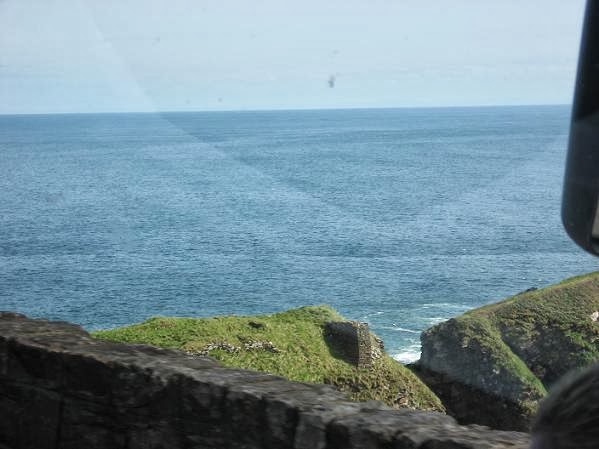 The sea seen from the road on the cliffs
The weather on the way back was more 'Scottish', with low clouds and a dreary feel, though the sun would come out later back in Inverness. 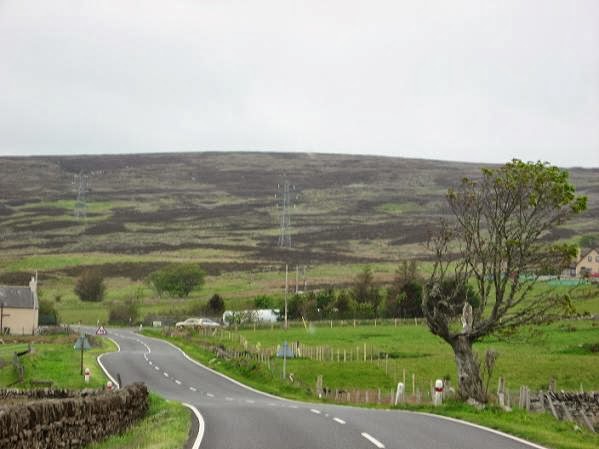 A road in Caithness
This is the way from Thurso back to the coast; the landscape of Caithness. Miles of hills, a few farms and sheep, and not much more. Coastal road in Sutherland
Back at the coast and into Sutherland, I caught a glimpse of Dunrobin Castle, with a farmhouse in front of the photo, and the coast to the left. It's rather archetypical. 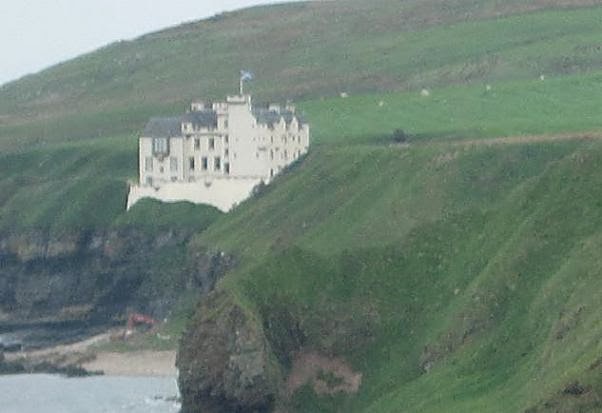 Dunrobin Castle
I even and even managed a close-up shot of Dunrobin Castle. I've seen photos on the net - it's quite a fairy tale building and not much like the austere stone castles I've seen on my journey else. 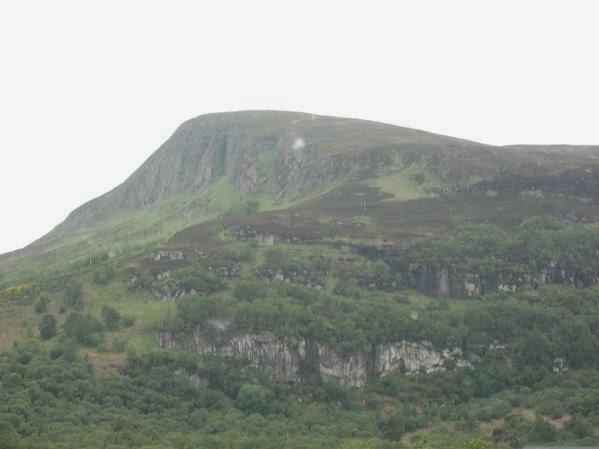 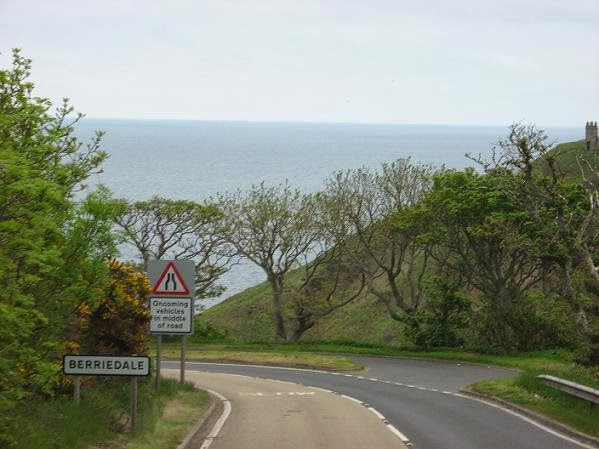 View to the coast again
And a final view to the coast at Berriedale. The sea is never far away. I didn't regret getting to Orkney this way instead of taking a flight from Aberdeen; it was a time well spent.

Comments:
I like the views of the sea. Since I live so far from it. :) The castle is intriguing. And probably tough to conquer!

I love Ailred of Rievaulx :-) The pics came out really well! They look great.

Beautiful pix of the landscape. Hope the book comes in soon - unless the person is allowed to re-new it? Does that happen in your libraries?

Constance, it's a fancy castle - some good trebuchet boulders and you're done. :-)

Anerje, you can't renew a book when someone else has preordered it. So either the person still needs it and is willing to pay the overtime fee, or it's a proverbial professor who missed the email alert, can't find the book, can't find the library or whatever ... ;-)

Time well spent, indeed. I am so glad you were lucky with the weather. Mist and cloud may be atmospheric and all that, but on a sunny day the Highlands are just jaw-droppingly beautiful. I don't think I've ever driven up the coast road north of Inverness (I tend to go to the west coast more than the north-east). It looks gorgeous.

Carla, as driver you'll have to concentrate more on the traffic than a tourist in a bus, but the coast road is indeed gorgeous.

I do agree with Constance, Gabriele, the photos of the sea are beautiful. And I too live in the mainland, far from such breathtaking scenery (in the south of Poland).

P.S. Did my last e-mail come through? The one in which I asked about Frederick Barbarossa? I just want to make sure, for recently I have encountered minor problems with sending messages.

Kasia, you should move to Gdansk. :-)

Sorry, yes I got it though late - Yahoo.mail isn't behaving most of the time these days. Unfortunately, the books I have about Heinrich the Lion and Frederick Barbarossa are in German. I don't know if there are any recent works in English though I should check that.

Thanks, Gabriele! Gdaśk is beautiful, isn't it? If my memory serves me you visited it once and returned with beautiful photos :-)

Don't worry about Frederick. I'll check the biographies in English myself. I'm looking forward to February. My brother-in-law is coming from Aberdeen with Otto and Rahewin's Deeds :-) I would love to learn your opinion about it. Is it a reliable source? I purchased it mainly due to Frederick's military expeditions (and his Polish policy) to Poland and his relations with Henry the Lion.

I should perhaps have said 'travelled' :-)