9 Nov 2014
Paderborn - The Town of Charlemagne and Bishop Meinwerk
This is only a brief introduction to the history and the historical buildings of Paderborn. There's much to see, and most of the churches and other buildings presented in this post deserve their own posts in the future. But for now, come with me on a short trip through a town rich in history and architecture. Sorry the weather wasn't playing more nicely; sunny photos would have been more pretty. 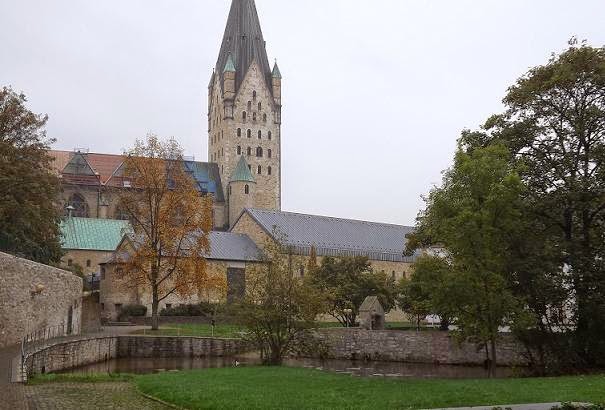 Overwiew of the old centre: The west tower of the cathedral, Ikenberg Chapel (left), Chapel of St. Bartholomew (left, the one with the green roof)
and the Ottonian palace (right), with the Pader springs in the foreground

Paderborn was founded by Charlemagne in 776, during the first years of his long war to conquer the - then pagan - Saxons. He built a palatine seat and a church, both surrounded by a wall since those Saxons were not exactly a peace loving lot at the time. He also held several diets in Paderborn. The town and the bishop's see that was established in 806 would play an important role for centuries to come. The bishops were elevated to princes of the realm in 1217. My regular readers will have come across the bishops of Paderborn a few times already (fe. in the recent post about Castle Plesse and the Counts of Winzenburg). Paderborn is an archespiscopal see until today. 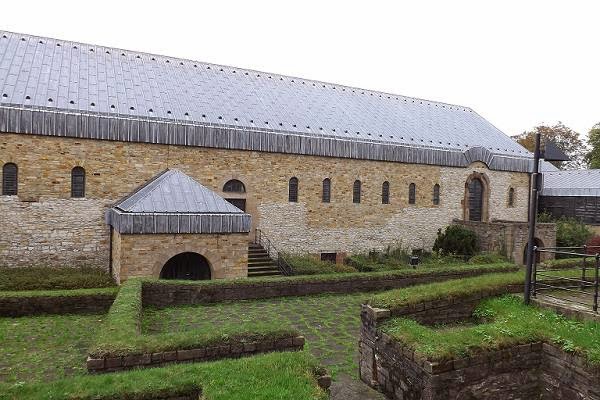 The Ottonian palace hall with the foundations of the Carolingian palatine seat in the foreground
Paderborn was an important palatine seat for the Ottonian kings as well. It was especially bishop Meinwerk (we came across him in the post about the Krukenburg) who held the see of Paderborn from 1009-1036 and who initiated the construction of most of the architectural landmarks of the town until today: the palatine seat, the cathedral, Abdinghof monstery and the chapter church of Busdorf. It was during Meinwerk's time (1011) that Paderborn became independent of the see of Mainz and began to establish its own role in the feudal network. 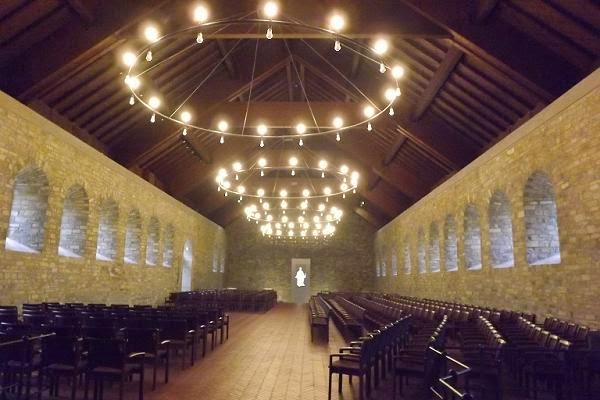 Interior of the - partly reconstructed - Ottonian palas, the great hall
The remains of the main hall of the Ottonian palatine seat and the attached Ikenberg Chapel are still substantial. Both have been reconstruced in 1978; you can clearly see the different stones that show the layers of original Ottonian and new masonry in the photo above. The foundations of the Carolingian palatine buildings, situated between the cathedral and the Ottonian hall, can be seen in the foreground; they have been excavated and preserved a few years ago. 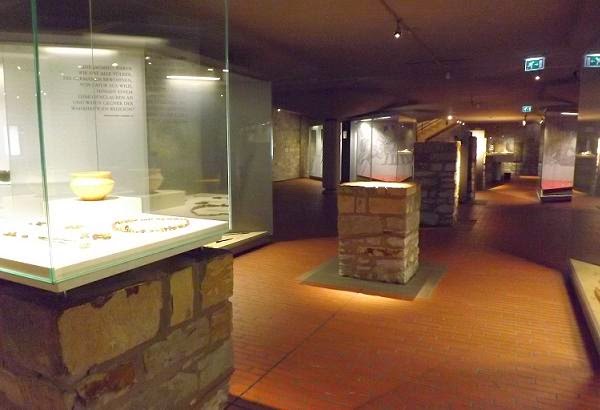 The Museum in the Palatine Seat
The palas building of the Ottonian seat today houses a very interesting museum in the lower floor; the upper floor, the reconstruced great hall, is used for events. The pillar foundations in the lower floor are partly still Ottonian masonry and it's a nice idea to use them to support exhibits today. It gives you a good impression of the layout of the building in the past. We spent some time in the museum because the exhibits (things that have been excavated in the area of the palatine seats) are interesting and well presented. 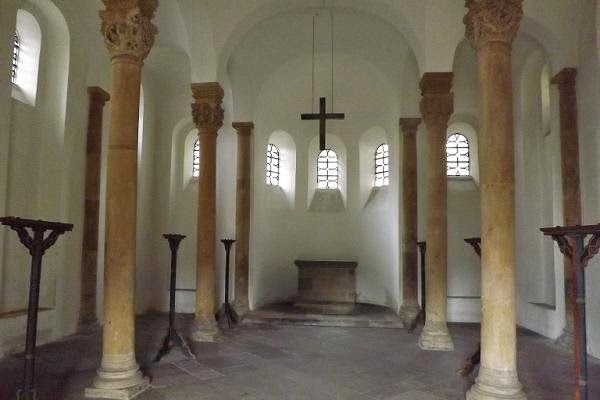 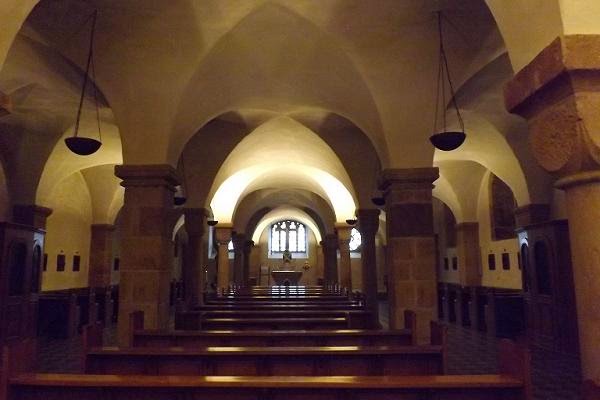 The cathedral of Paderborn, the Romanesque crypt
The history of the cathedral goes back all the way to Charlemagne, but the first building did not survive; and the one from Meinwerk's time has been altered considerably. The present church is mainly Gothic, except for the west tower, the crypt and the so-called Paradise Gate, but the interior has unfortunately been 'improved' with several huge Baroque altars and grave ornaments for dead bishops. The exterior is mostly scaffolded in right now. But the crypt, dating to 1120, is a beautiful, quiet place untouched by Baroque frills. 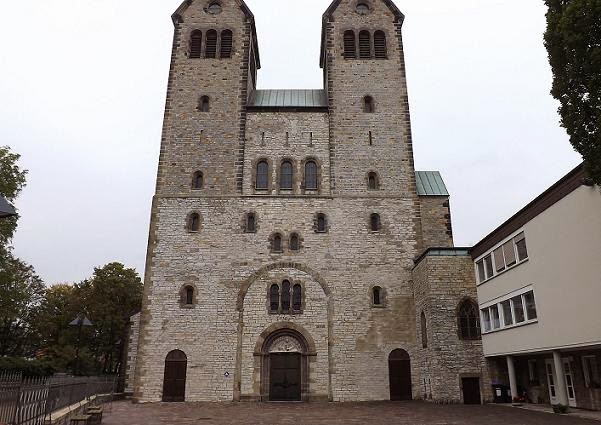 Abdinghof Church, the westwork
The so-called Abdinghof Monastery is another foundation of Bishop Meinwerk. It would become one of the richest and most influential monasteries in Germany during the high Middle Ages. The church, dedicated to St.Peter and Paul, has been changed from Meinwerk's building much less than the cathedral. It is still pure Romanesque and some alterations have been eliminated during the repairs after the damage of WW2, like the present, and original, flat timber ceiling in the main nave replacing the 12th century vaulted one. The main difference between the present look and the one in Meinwerk's time is the lack of murals, but those rarely survive. 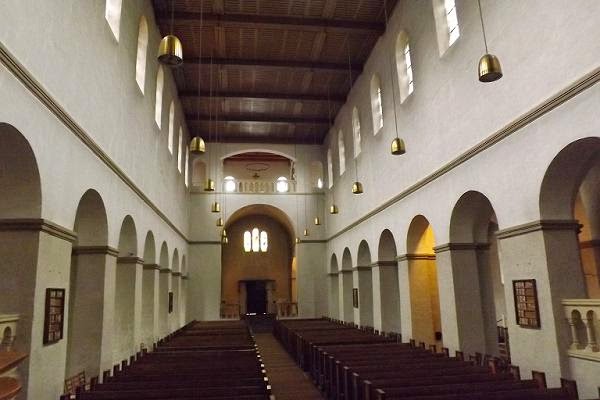 Abdinghof church, interior with view to the imperial lodge
The chapter church today knows as Busdorf Church (photo below) is the last of Meinwerk's buildings I want to show you. Meinwerk wanted to build it according to the Church of the Holy Sepulchre in Jerusalem and sent the abbot of Helmarshausen there to get the plans. Unfortunately, that first building from 1036 does not survive except for the west transept. But since the church was closed and I could only get some photos through a fence, I can't show you that one. The major parts of the church to the late 13th century (Gothic style), but the cloister is Romanesque. 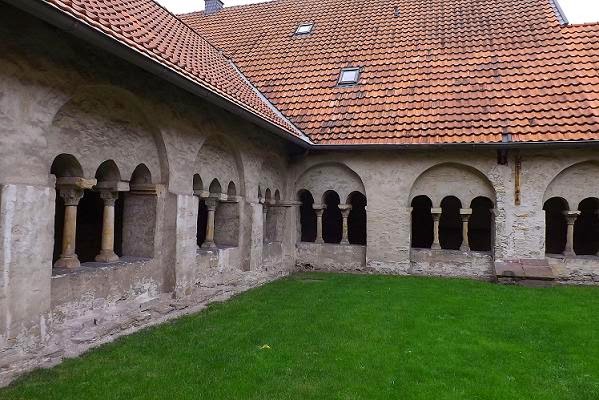 Busdorf Church, the cloister
The bishops of Paderborn kept getting into trouble with the burghers of the town and so they moved their main residence a few miles out of Paderborn in 1370. Palace Neuhaus has been built in several steps; the present building is the final result, dating to the late 16th century. It's a very symmetrical four winged palace with towers in each corner, surrounded by a water filled moat. It is situated in a large and beautiful garden. The shrubs and flowers close to the palace are kept in Baroque fashion, but the rest of the garden is English in style. 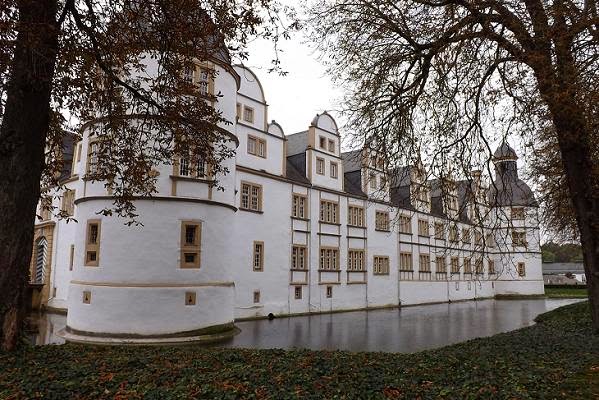 The Renaissance palace Neuhaus outside Paderborn
I'm not very active on the blog and those of my friends (lazy commenter, I know) during November, because I again participate in the National Novel Writing Month, and this time my progress so far has been very satisfying. Let's hope I can keep catching words. *grin*
¶ November 09, 2014

Comments:
I did a unit on the Carolingians at uni - wonderful to see these pictures.

I love St Bartholomew Chapel. Reminds me of St John Chapel in the Tower of London, one of my favourite places.

PS Gabriele, could you recommend any books on Heinrich, the son of Heinrich der Lowe and Matilda, or at least where biographical notes on him can be find?

The most important - and tallest - building in my hometown is a bank box.

Your photos look very impressive even without sunny weather :-)

Kasia, I'm afraid Heinrich, son of Heinrich the Lion got a bit neglected in literature; he mostly features in books about his father or his brother, Emperor Otto IV. Also most of the books I have are in German. I can try to gather some biographical notes for you once a) Nano is over, and b) I got a grip on the new job I'm starting in December and which will likely be stressful in the beginning. So maybe during the Christmas holidays.

Thank you, Gabriele! Yep, Heinrich IS a little bit elusive :-), but I have come across a wonderful book. Just in case you haven't read it: "Princely Brothers and Sisters: the Sibling Bond in German Politics 1100-1250" by Jonathan R. Lyon. What's the most important it's in English :-) Thank you for your kind permission to use the photos. Much appreciated. I am planning to go to Brunswick one day. my hubby saw your pics and wants to join in :-)

PS I didn't know that the Brunswick Lion was the oldest surviving sculpture north of the Alps. How very exciting!!!