15 Mar 2015
Nunnery and Ducal Burial - The Church in Wiebrechtshausen
The church in the small village of Wiebrechtshausen near Northeim is another of those pretty Romansque churches you can find in off road corners in Germany. It is one of the sites where I got a bunch of photos but not much information to go with them, in this case likely due to the fact that Wiebrechtshausen never played a significant role in the great historical events. 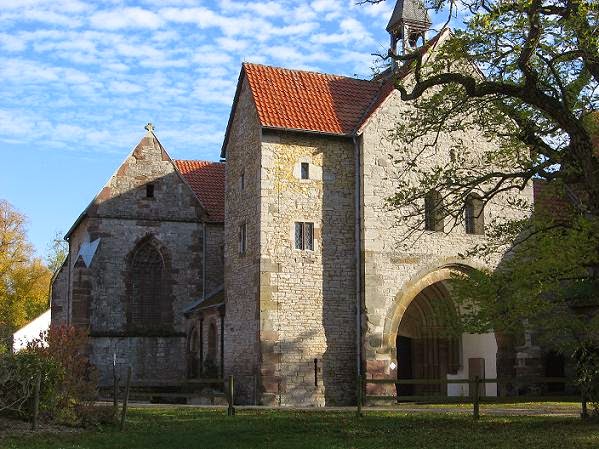 The most important event connected with the nunnery is the burial of Duke Otto of Braunschweig-Göttingen († 1394), first outside the church because he had been excommunicated. After his wife managed to get the ban lifted in 1400, a chapel connected to the church was erected over his tomb. The connection with House Hannover also helped in getting funds for repairs in later times, so the church is in a good condition today. 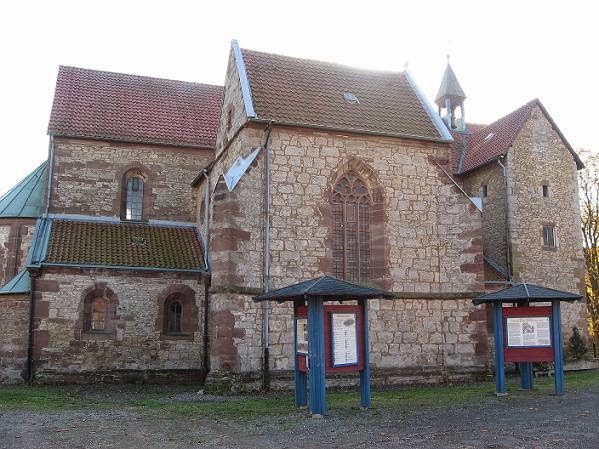 North side with the burial chapel of Duke Otto
Like in the case of other historical buildings from the earlier Middle Ages, the exact time of the foundation can not be traced; the first mention of a nunnery at Wiebrechtshausen dates from 1245. A hospice predates the nunnery; it is first listed in a charte of the archbishop Siegfried of Mainz for 1216. Dendrochronological dates of the remains of a window sill also point to a time between 1210 and 1240. 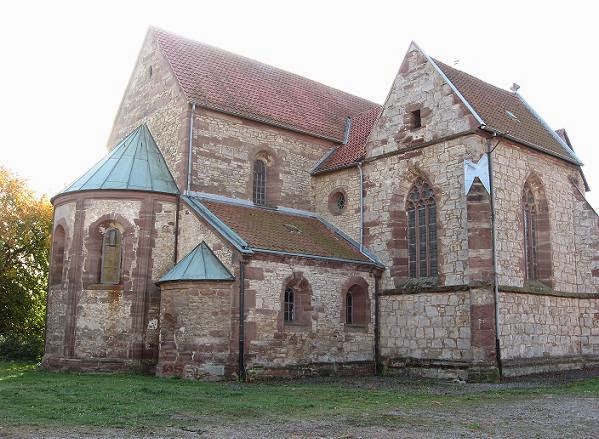 The church seen from the northeast with the main apse to the left
There may have been a hospice already in the 11th century, if the citation in Bishop Meinwerk of Paderborn's Vita of a 'Wicberneshusen' refers to a settlement close to the present day village. A hospice likely included a church, but the present one - dedicated to St.Mary - was built in the first half of the 13th century, on the threshold between the Romanesque and the Gothic style. It may have replaced an older building, though. 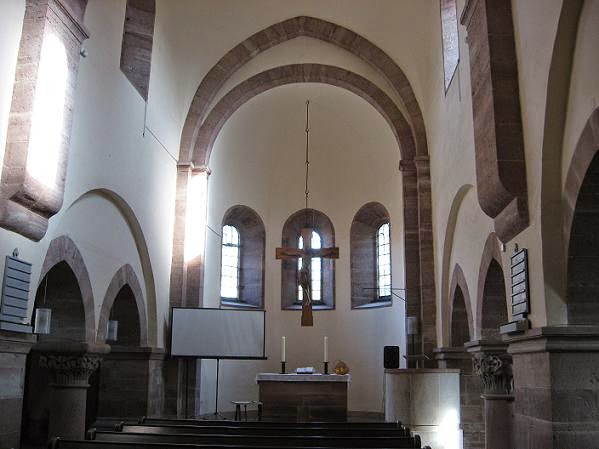 Interior, view to the altar
The founder of the nunnery was one Herewigus, but nothing more is known about him. The nuns and the abbess came from the nearby chapter in Northeim, as did most of the provosts. There is also no information about the lands given to the nunnery by Herewigus. Later, local nobles and rich burghers would donate lands so that the nunnery became an economic endeavour in its own right. 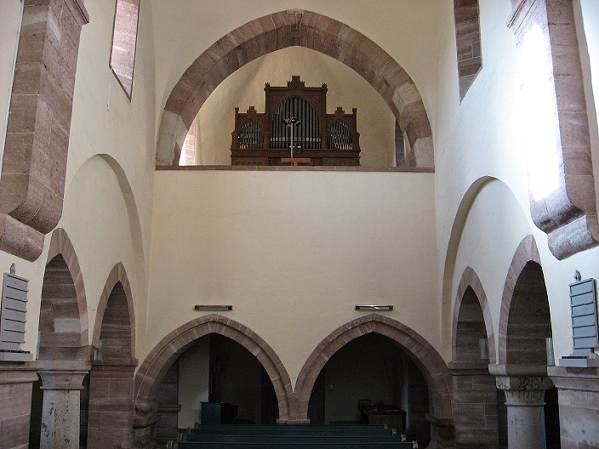 Interior, view to the nuns' gallery
The nuns in Wiebrechtshausen - on average twelve of them - followed the Cistercian rules which can be summarised by the famous ora et labora. Contrary to Cistercian monasteries like Walkenried, the nuns did not start out in the wilderness which they then cultivated. Instead, their houses were in places that already had a some sort of infrastructure, and they worked as scribes and illuminators. The hard work on the fields was done by lay servants. The nuns were well educated; a teacher is mentioned in 1318, and it is said they all had Latin (in a source from 1542). 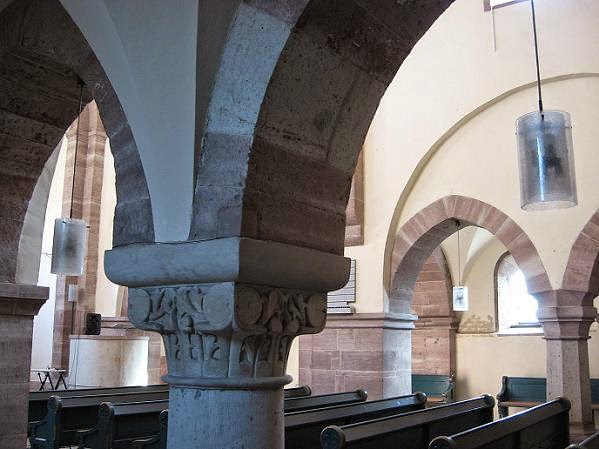 Another interior view
In the late 14th century, the dukes of Braunschweig began to take a closer interest in the nunnery. The most visible remain of this interest is the St. Anna's chapel which was erected over the tomb of Duke Otto of Braunschweig-Göttingen. Contrary to the church itself, the style is purely Gothic; a single room of 7,80 x 4,70 metres with three high Gothic windows and a gross grain vaulted ceiling supported by two pillars with buttresses on the outer wall. The material is sandstone for the foundations and sills, and limestone for the walls. 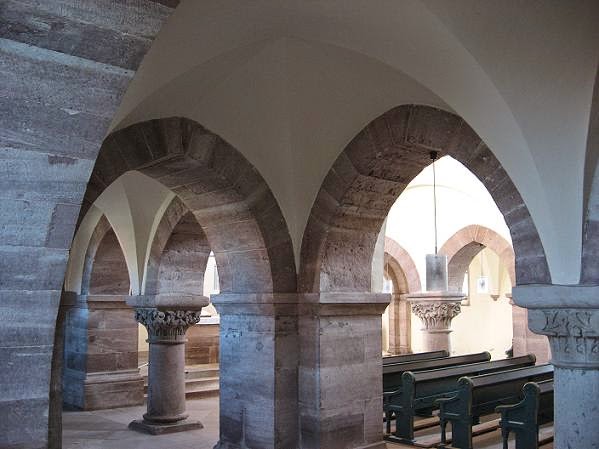 The church seen from St.Anna's chapel
The church itself is mostly constructed of roughly hewn limestone ashlar; the defining elements like window frames, foundations and corner stones are red sandstone. The church has no tower or transepts, but three apsides in the east and a pretty massive westwork with an entrance hall. The Romanesque windows are small but the basilica style with additional windows in the upper main nave gives enough light. The large Gothic window of the chapel stands out from the outside (see photo above). 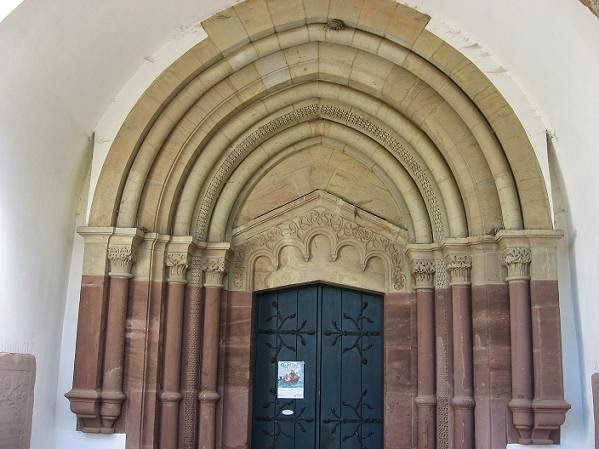 The main gate
The prettily decorated main gate already has a slightly pointed arch; a sign for the border between the Romanesque and Gothic style. But the overall impression of the interior is Romanesque with its alternating sturdy rectangular columns and more slender pillars supporting the vaulted ceiling. Some of the pillar capitals are decorated with flower and leaves tracework.

The church has a main nave and two lower side naves, but the view is drawn in more by details than by the whole because of the compartmentalisation of the architecture. 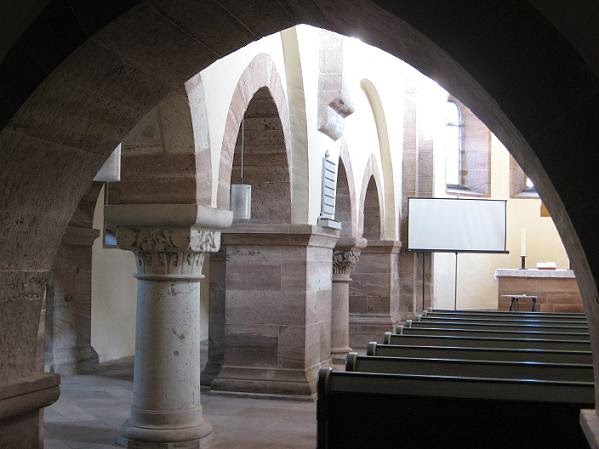 Interior, seen from the entrance arcades
The church measures 28,60 x 14,50 metres. The defining architectural elements like the frame of the vaults and windows, the vault support grains and the columns are again highlighted by red sandstone, the rest of the walls is today whitewashed. No traces of murals are mentioned, but there likely were frescoes in the Middle Ages. The westwork hall holds the nuns's gallery (see photo above) and here again you can see that the archs are already slightly pointed, while the apse windows in the altar room are still of the rounded Romanesque variant. 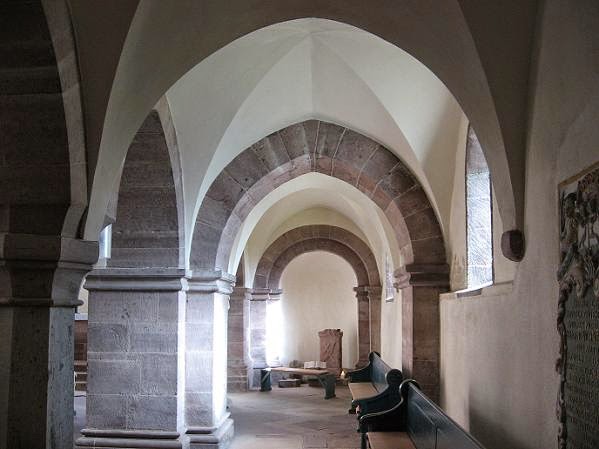 Southern side nave
The Wiebrechtshausen nunnery did well until the later 14th and 15th century when it faced periods of financial troubles, and sometimes had to pawn out land to keep afloat. Its last time of flower was under the provost Bertold Steinbuel (1475-1505) who managed to get the nunnery out of debt, reformed the agriculture and introduced new mills, barns and stables. 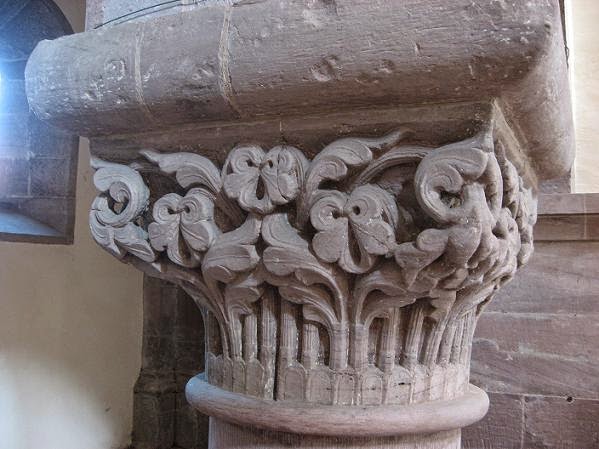 Closeup of a capital
In 1584, the Refomation was introduced, and the nunnery was finally secularised in 1615. The land fell to the dukes of Braunschweig who rented out the fields, mills and other sources of income. Today, Wiebrechtshausen is part of the Hannoverian monastery fonds and still a substantial agricultural endeavour. Most of the outer buidlings date to the 18th or 19th century but have been erected on older foundations. Part of the nuns' lodgings south of the west gate still retains some 13th century stonework, though the building has long been used as barn. 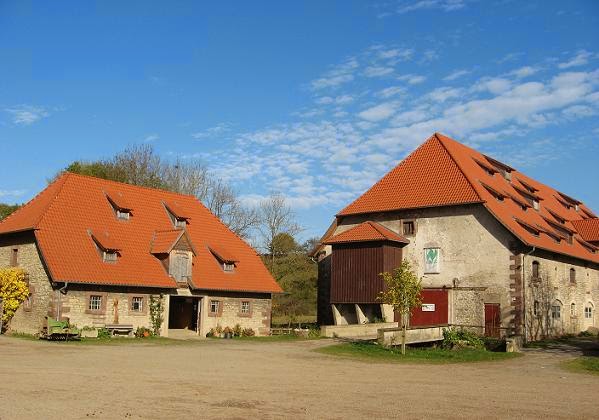 Wiebrechtshausen nunnery, outer buildings
Besides the remains of Duke Otto, the church is also said to hold the intestines of Duke Friedrich of Braunschweig-Lüneburg who was assassinated near Fritzlar in May 1400. He is buried in Braunschweig.

Comments:
The church is absolutely beautiful, Gabriele! And what a fascinating history involved, even if not the great events themselves.

Have I mentioned that I love Romanesque? :-)

Thanks for all the interior views. Is sandstone a usual material for interior parts?

Kasia, luckily there are a lot of Romanesque churches in Germany.

Constance, sandstone is easily avaliable locally. It's tougher than limestone (which also can be found in the area) but easier to work than the Harz granite.

Unfortunately, we have only few left in Poland :-( But due to the fact they are so very very precious...

"Wiebrechtshausen never played a significant role in the great historical events" For which the inhabitants were probably almighty thankful :-)
What a pretty church! Your photos are lovely.