6 Sept 2015
Surviving as Sacrifice - The Nydam Ship
The peninsula (1) between Baltic and North Sea is a typical terminal moraine landscape which developed after the last Ice Age (~ 11,700 BC). Fertile marshlands - albeit prone to flooding - in the west are followed by the sandy geest formation in the middle, and the uplands to the east. Those are a landscape of low hills and lakes, bays and firths, and bogs. The land had been settled since the Neolithic Age, but it would be the people from the Iron Age who left behind the most interesting remains in form of bog sacrifices. Among those is the famous Nydam Ship. 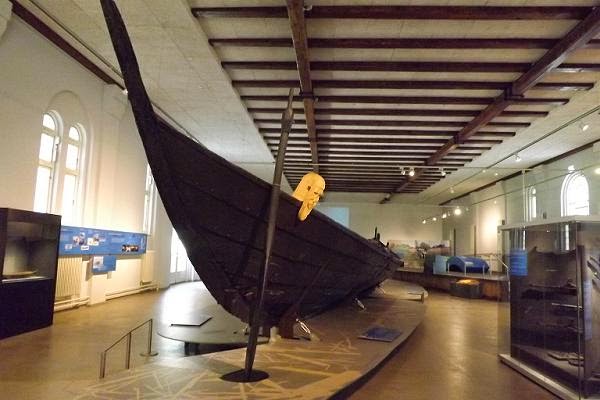 It is by ships like this the Angles and Jutes came to England. Imagine a fleet of those, some even larger, arriving at the shore close to your village, the crews brandishing the spears and swords also found in the bog. In AD 320 you could at least hope the local Roman garrison was on alert, but a hundred years later you might wonder if the Picts were really that bad. *wink* 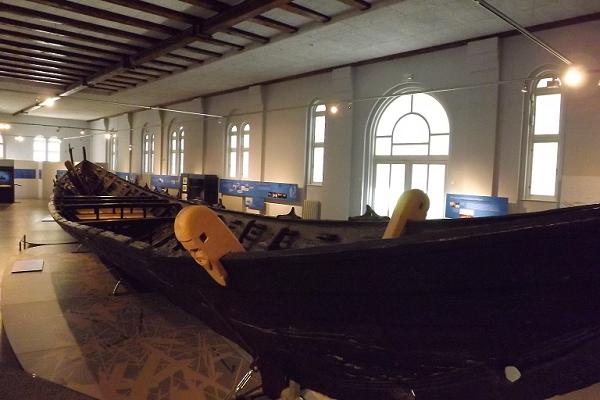 The Nydam Ship from a different angle
The Danish archaelogist Conrad Engelhardt discovered the Nydam Ship in a bog near Sønderborg in Denmark (3) in 1863. It was one of several ships that had been deposited in a lake between ~ AD 200-450. Another oak ship found at the site had been cut to pieces, but this one remained complete. A third find consisted of a complete ship made of pine, but it was lost during the Schleswig War in 1864. Parts of another, even larger oak ship have been discovered in 2011, but there are currently no plans to salvage it (4). The ships have been buried with lots of weapons and arms in what had then been a shallow lake. The lake silted over and the developing peat bog offered ideal conditions for the preservation of both wood and metal. 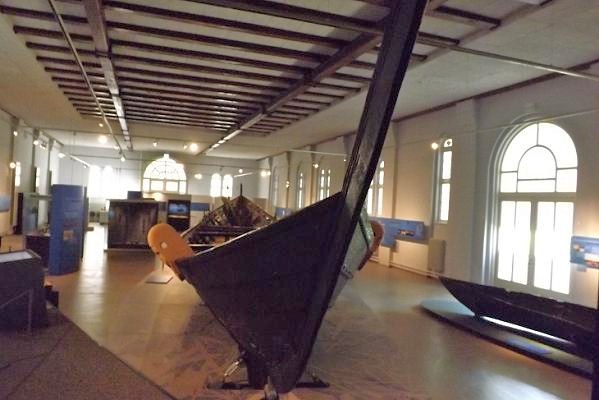 Seen from the 'bow'
When the ship was salvaged, some parts were missing or in such a bad shape that they had to be replaced with new ones when the ship was salvaged and restored. But the hull of the Nydam ship survived pretty much intact. It was constructed in clinker technique with overlapping planks, or strakes, above the keel. They were fixed by iron rivets (5). The planks had clefts left standing when they were cut, to which the frames that were lashed. The keel (14.30 metres long and 57 cm wide midships to 20 cm at the ends) was made from one piece of oak, but the strakes were scarved and consisted of more than one plank. The equally shaped bow and stern posts were interlocked with the keel. Caulking was done by wool soaked in sheep's tallow and birchwood pitch. 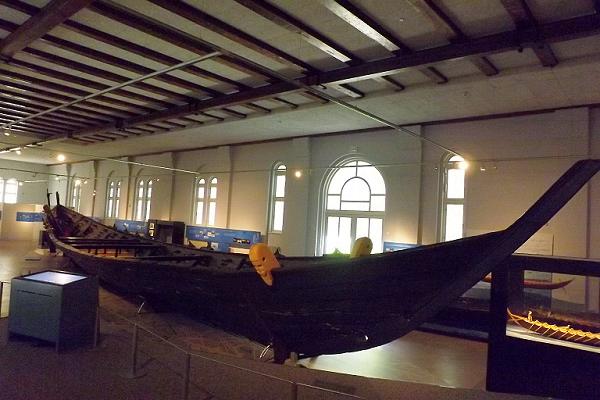 View from the side
(There is no distinction between starbord and port, because the symmetrical shape of the ship
does not have a clearly defined stern and bow)
The planks have shrunk a bit (from 56 cm to ~ 45 cm) since the boat came in contact with dry air. Its shape is not entirely correct as measurements undertaken in 1995 show: the prow should be higher, the draught deeper and the inside more V-shaped, but due to the altered condition of the wood, the ship cannot be taken apart and reassembled in its correct shape. 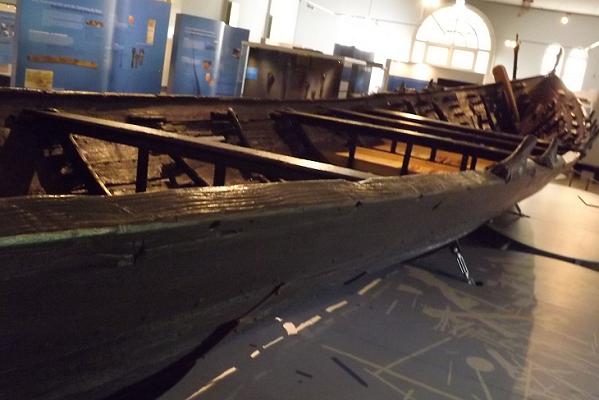 View to the inside
Only some bits of the frames - originally single pieces of oak each - survived, though we know by the clefts that they were set p about one metre apart. In the middle of the ship, each plank had two clefts, as does the keel; towards bow and stern the amount of clefts decreases.

It is assumed that the ship was weighted by ballast stones. Recently, parts of a deck, a layer of planks and wickerwork, resting on transverse sticks, have been excavated. A deck between the ribs and the rowing benches would have been necessary for the rowers to put their full power to the oars. The rowing benches are reconstructed as well; they were held by vertical wooden supports and about 30 cm wide (smaller in the middle). The ship would have required 15 oarsmen on each side. 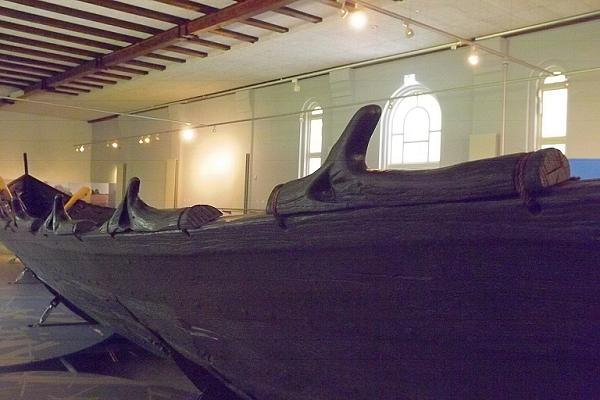 Rowlocks fixed to the gunwale
The gunwale on the 'port' side and the rowlocks also survive mostly in fragments. The rowlocks are interesting because they were crafted separately and latched to the gunwale. The rowlocks were made of forked branches from alder and birch, woods that are soft enough to counter the pressure from the hard ashen oars, and they could be easily replaced in case of wear. The second, chopped up oak boat found in the Nydam bog had its rowlocks cut into the oaken gunwale.

Engelhardt only discovered fragments of oars, but a dig in the 1990ies recovered about 20 oars in a pretty good condition. Some of them are assumed to have belonged to the Nydam Ship. They were made from radially split stem wood of the ash, about 3 metres long and with slim blades. Their shape and the short horizontal distance between rowlocks and thwart points at a rowing technique with short, quick strokes; different from later Viking ships. 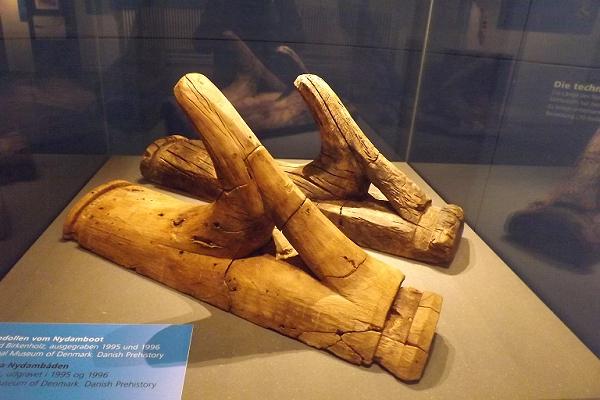 Two restored original rowlocks on display in the museum
The side oar attached to the ship is a copy, but the original blade survived albeit in bad condition. It is 55 cm wide with a sharp aft edge and a thicker, rounded fore edge.

Since both the steering oar and the rowlocks are only attached by ropes, they could be shifted to change the direction of the ship with its symmetrical bow/stern, though we don't know if that was actually done (fe. on a river too small to turn the ship). 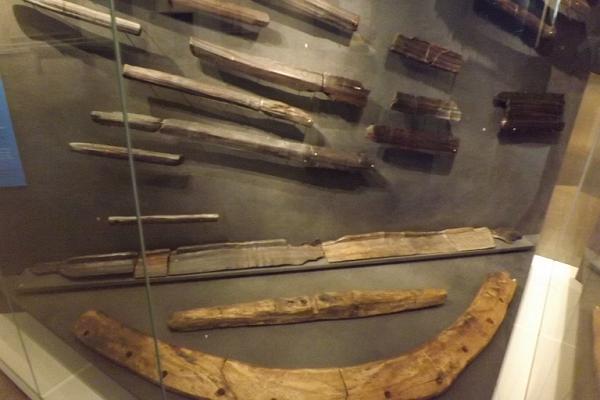 Remains of oars and frames discovered in 1863
You may have noted the carved heads on the photos; their light coloured wood sticks out in contrast to the dark boat. The bearded, cap wearing heads also have been discovered during the 1990ies dig. They rested on posts and were likely attached to the gunwale the way they are displayed today. Their function is not entirely clear.

The finds also included several hand bailers. The best preseved original is currently shown in Copenhagen. Remains of rope have been found as well. Parts of an iron anchor discovered by Engelhardt are lost today, but some drawings of the finds exist. 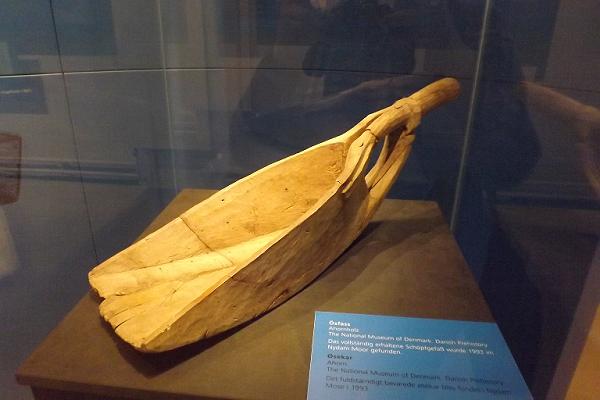 Reconstructed hand bailer
Whoever built the Nydam Ship had taken a close look to Roman ships from the time. Contact was likely established at the Dutch coast which was then part of the Roman province of Germania inferior, or in Britain. The clinker technique and the caulking with textiles were used by the Romans, as well as the frames to strengthen the hull, and the scarfing of bow and stern to the keel. The anchor fragments show Roman influence as well. I wonder why the people who built the Nydam Ship did not also copy the concept of having a sail in addition to the oars (6). 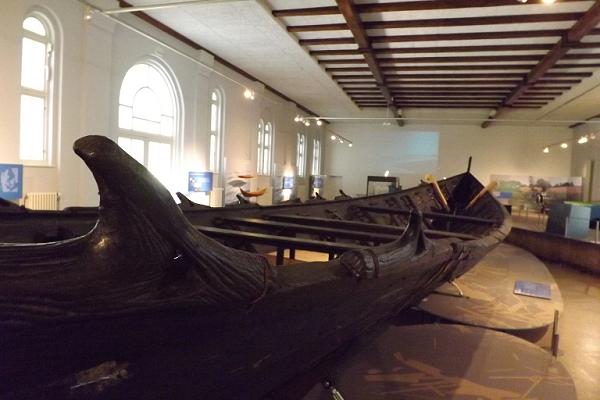 View to the inside with rowing benches
The Nydam Ship was built ~ AD 320 according to dendrochronological dating, and deposited in the bog in ~ AD 350. But after her discovery in 1863, her journey was not at an end, due to the political situation. Engelhardt prepared the ship and other finds for an exhibition in Flensburg, but the Schleswig War between Denmark and Prussia in 1864 forced him to store the ship in an attic. After the war, the town of Flensburg and Engelhardt's collection were given to Prussia. The ship was moved to Kiel where it again languished in an attic. It took until 1925 to present the ship and the other finds in the Museum vaterländischer Alterthümer in Kiel. During WW2 the Nydam Ship was removed to a lake near Mölln (south of Lübeck) where it was hidden on a barge. After the war, Denmark claimed the ship and the other Nydam finds since the bog lies on Danish territory, but the Allies allowed it to remain in Germany. The ship was moved to Schleswig where it is exhibited since 1947. It got a new hall in 2013 (7) 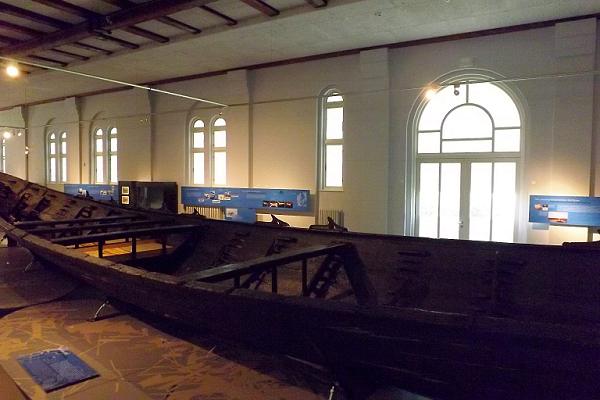 Another view from the side
A new excavation campaign was launched by the Danish National Museum (Institute of Maritime Archaeology) from 1989 to 1997 in order to look for remains missed by Engelhardt and new finds. The campaign was pretty successful and Copenhagen got its share of interesting things from the bog. But the main exhibition is still the one in the State Archaeological Museum in Gottorf Palace in Schleswig. Including lots of weapons I'm going to present in a future post. 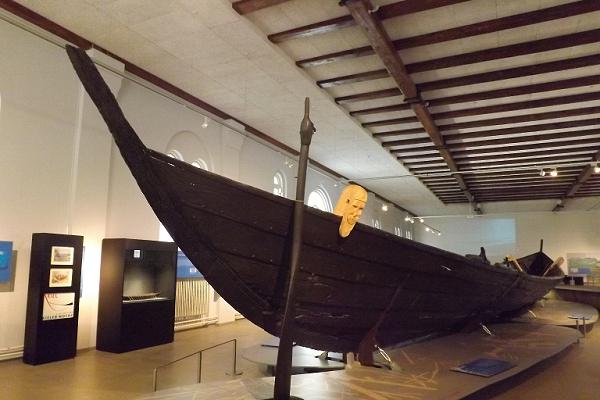 View from the bow with the steering oar
Footnotes
1) You can find Hamburg easily. North from there right into the peninusla, you will come across Schleswig and Flensburg (and, slightly east of Flensburg, Sønderburg with the Nydam Bog). North-east of Hamburg you'll touch Lübeck and if you go east from there along the coast, you'll come across Wismar all the way to Stralsund, the great towns of the Hansa League. South of Lübeck is Lüneburg which I've mentioned several times as possession of the Welfen dukes of Braunschweig.
2) I've found a crew of 45 mentioned on the internet, but I rather rely on the book by Abegg-Wigg.
3) Today's borders. The Schleswig peninsula was contested between Germany and Denmark for centuries, the frontiers moving to and fro with several wars.
4) The ship is larger and older than the Nydam Ship. Modern Archaeology doesn't always need to dig big holes and drag everything out to gain information, and therefore the ship will remain as long as the bog is the best way to preserve it.
5) The rivets have been replaced with new ones, but in case of the bog conserved Nydam Ship iron doesn not pose the same danger to the timber as in the salt water conserved Vasa.
6) It would be interesting to compare the Nydam Ship with the remains of the older one still in the bog and check that one for Roman influences, or lack thereof.
7) The Nydam Ship was lent to Copenhagen in 2003/04.

Comments:
Despite her age, she's a beauty :-) I have just pictured Angles and Jutes taking the risky sea-crossings in her. That must have been quite an experience, especially in the stormy weather.

Kasia, I suppose it's the tough guys who made it, and small surprise they snatched the better part of Britain in the generations to come. :-)

See the cover and content of Conway's History of the Ship - The earliest ships for more details of the Nydam vessel. Mark Myer's cover really brings it to life!