24 Oct 2016
14th Century Stonghold and Film Set - A Virtual Tour of Doune Castle
Ivanhoe has been there, Monty Python's knights in search of a grail, and Jamie Fraser and Claire Randall, the star crossed lovers from Outlander. Castle Doune, near Stirling in Scotland, has developed a certain sort of fame as film location (1).

In Outlander, the castle stands in for Castle Leoch, seat of Collum MacKenzie, chief of the clan, and his brother Dougal who is a supporter of Prince Charles Edward Stuart, better known as Bonnie Prince Charlie. It fits then, that in real history the castle was held for the prince by a McGregor of Glengyle in 1745.

If you are interested to see where Claire spent the first weeks after she went through a magic time-travel portal stone, follow me on a virtual tour of the castle: 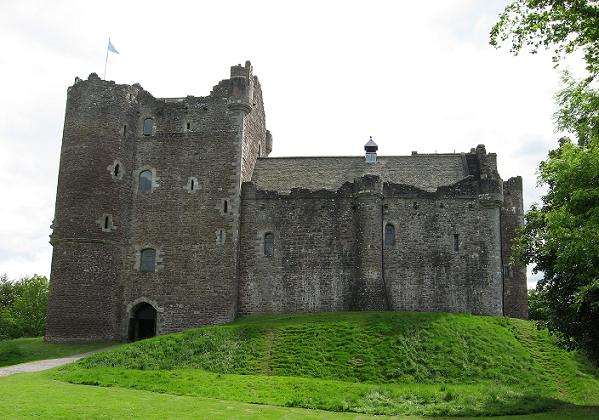 Contrary to most castles in Scotland that have been altered over the times, Doune is the product of a single building period and has survived relatively unchanged until today.

It was built by Robert Stewart, Duke of Albany (1340-1420, duke since 1398), son of King Robert II of Scotland and regent of Scotland in all but name since 1388, ruling first for his father, then his brother Robert III, and finally for his nephew, James I, who was a prisoner of the English. Robert Stewart became Earl of Menteith by marriage to the heiress Margaret Graham, and was granted the lands on which Castle Doune now stands in 1361. The castle was at least partially complete in 1381 when a charter was signed there. I'll get back to the history of the caste in another post. 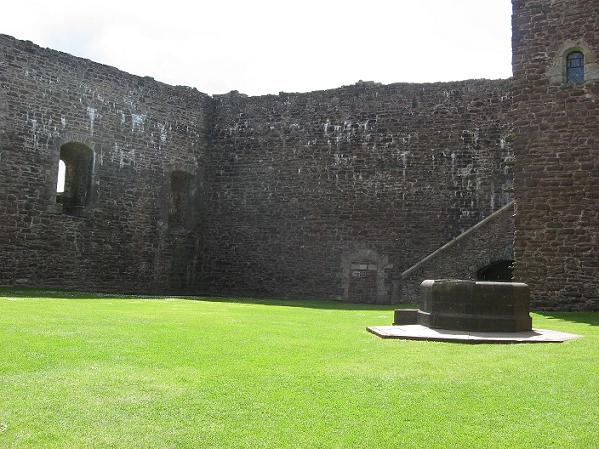 The courtyard
Doune was obviously planned as courtyard with buildings on all sides, but the only buildings that were completed are the gatehouse tower with the rooms of the lord and his family, the great hall, and the kitchen tower with kitchen and guest rooms. Those buildings range along the north and part of the west side. Doune can be seen as development towards the palaces arranged around a courtyard like Linlithgow, built in the 15th and 16th century. 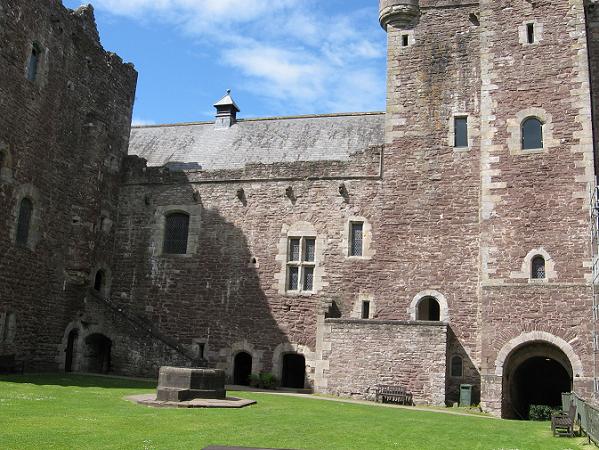 Hall and Gatehouse Tower, seen from the courtyard
Assumedly, Albany had originally intended to build his personal lodgings at the south side of the yard (there are three unusually large windows in the curtain wall), but they were never completed and he lived in the Gate Tower.

The advantage of the large courtyard is that film crews can set up timber buildings against the curtain walls. I've spotted a few in Outlander. They also replaced the lawn with mud. 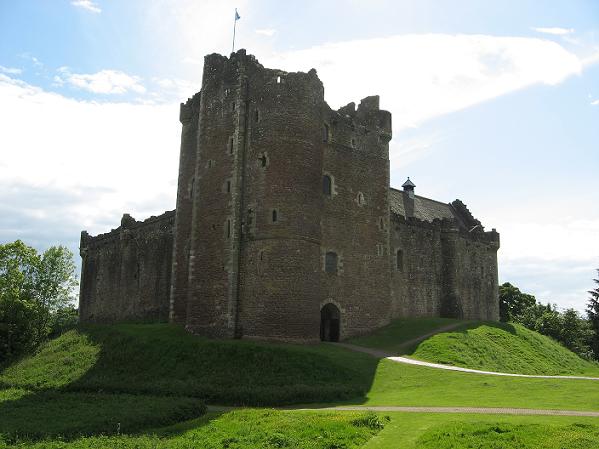 Doune Castle, Gatehouse Tower
The gatehouse tower has a size of 18 x 13 metres (59x43 ft) and rises to 29 metres (95 ft) (2). It held the lord's hall, the lady's chamber, and several more rooms. The function of most of those can only be guessed. There is a projecting round tower with an additonal rectangular tower on the north-east corner which holds the latrines and chimney flues, so the duke and duchess got ensuite rooms with central heating.

Another possible function could have been to shoot missiles at attackers of the gate - see the arrowslit windows. The somewhat older Dunstaffnage Castle once had a corner tower serving that purpose. 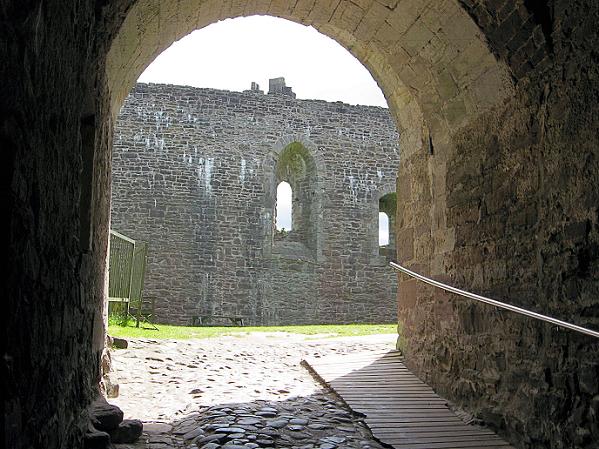 Entrance archway
The 14 metres long vaulted passage was once secured by timber doors and cross-bared iron grilles, so called yetts, on both ends. The outer one can still be seen. There is also a slit in the roof from which one could shoot arrows and any intruder. On the right side is the porter's room which serves as castle shop today, on the left a prison cell. The entire entrance was separated from the rest of the castle, and the thick stone vault protected the tower from fire.

The gate vault also makes for a scenic entrance to the castle to ride through. 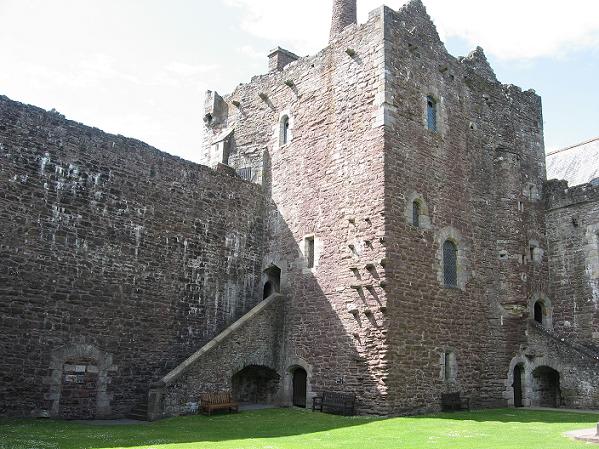 Kitchen Tower, seen from the courtyard
The kitchen tower can be considered as second tower house, measuring 17 x 8 metres (56x26 ft). The kitchen is on hall level, beneath are storage cellars. The kitchen had an oven for baking bread, and an 18 ft wide fireplace, large enough to roast entire animals on a spit. The vaulted ceiling has smoke holes above the windows, and there are slop-drains on one side. The Jacobite garrison built a bread oven in the kitchen, but that doesn't remain. 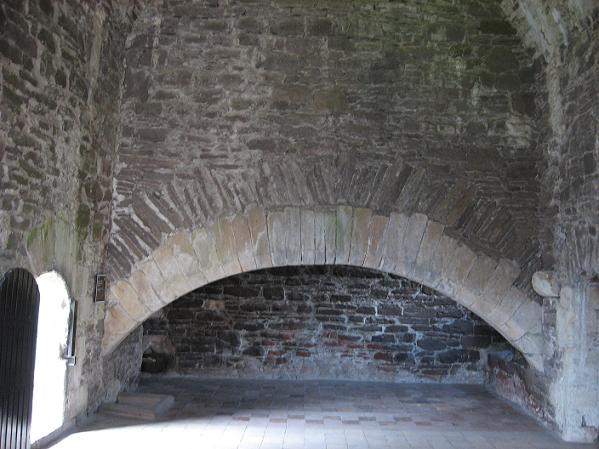 The great fireplace in the kitchen
A staircase leads to the so-called Royal Appertments on the upper floor. They are also known as Queen Mary's Chambers, for Mary Queen of Scots who briefly stayed in Doune Castle a few times. The chamber plus adjacent sleeping closet and latrine were fit to host guests of high rank. The location over the kitchen made the rooms some of the warmest in the castle. 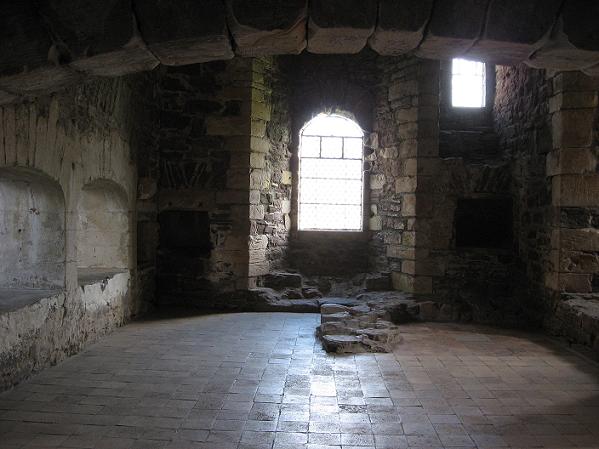 Servery, seen from the entrance to the Great Hall
There is a triangular anteroom which connects the kitchen tower with the great hall: the servery. You can see two arched serving hatches on the left, big enough to pass a roast hog through; a feature unusual for the period. In other castles like Caernarfon, the way between kitchen and hall was much longer. Looks like Albany wanted his food steaming hot. 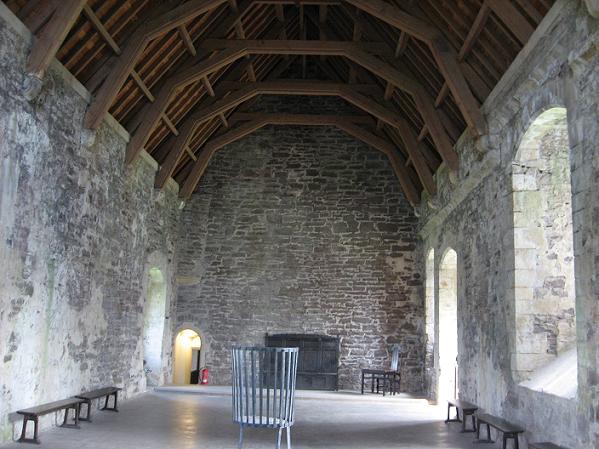 The Great Hall
The great hall is an impressive room of 20 x 8 metres (66x28 ft) and 12 metres (39 ft) high, with a vaulted timber roof (reconstructed in the 19th century) with a louver in the middle. The hall has no fireplace and was probably heated by a central fire in a fire basket like the one you can see today, though I wonder how much use that would be in a room of such dimensions. A roaring fireplace or two should have worked better. Well, maybe they had enough mulled wine to get warm from the inside. :-) 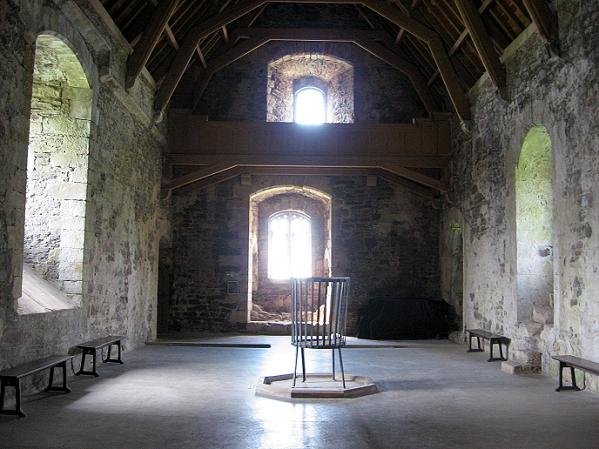 Great Hall with entrance and minstrel's gallery
The wooden minstrel's gallery is also reconstructed. A staircase leads down to the buttery where the wine and beer were kept. The walkways on the battlements could also be reached from the gallery.

Five windows of different shapes lit the hall. The large dais window in the back where the lord would have sat, hides a little side door to a latrine. 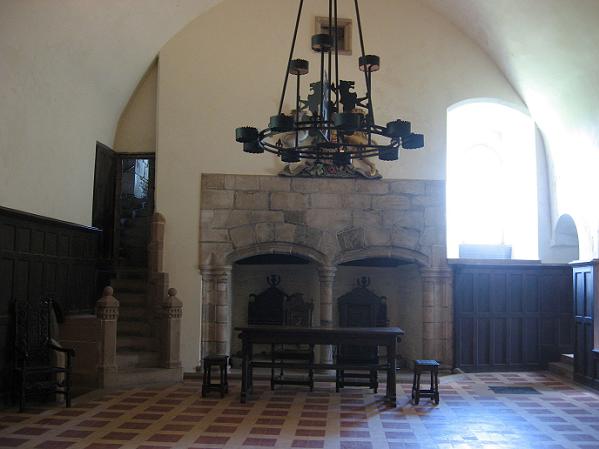 The double fireplace in the Lord's Hall
The large room above the entrance in the gatehouse tower and adjacent to the great hall is called the Duke's Hall. It would have been used for smaller parties and audiences. The room has an unusual double fireplace which is original, but the furniture dates to the renovation of 1883. A staircase on the north side gives access to the minstrel's gallery and the battlements. The Duchess' Hall
The hall above the Lord's Hall is supposed to have been the duchess' hall. At the courtyard side is some sort of large alcove that may have been screened from the rest of the room and served as oratory or private chapel (on the right side of the photo). On the wall is a so-called credence which held the consectated vessels and a basin with holy water. There would have been a small altar as well. The ceiling of the hall is missing today. 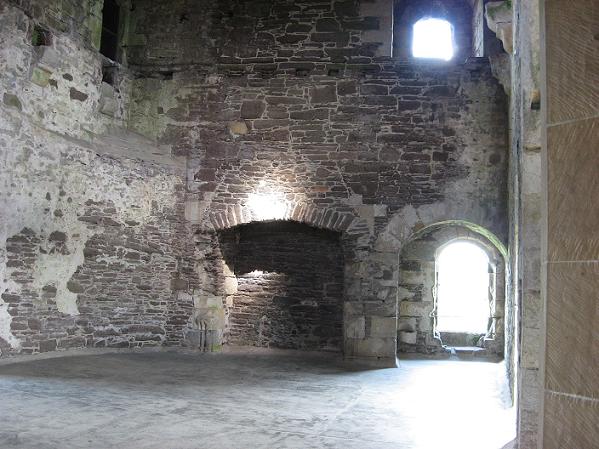 The duchess' bedchamber
The round tower at to the Gatehouse Tower (see photo above) housed the bedchambers of the duke and duchess. The chimney flues were not enough, both rooms also got fireplaces.

Those castles were cold; no wonder people back then wore several layers of clothes all the time. Claire's dresses are not only pretty, they'd be warm, too. 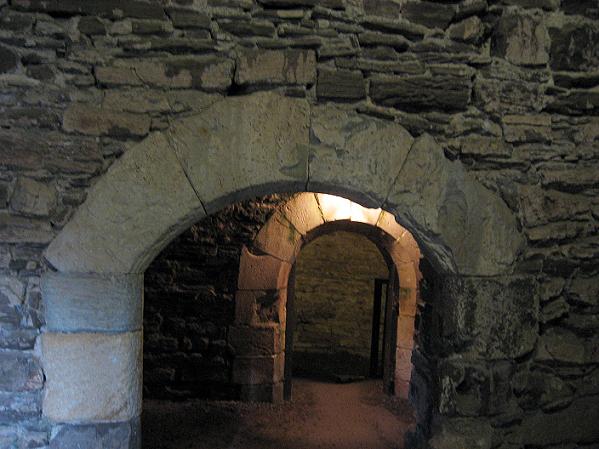 Cellars in the Kitchen Tower
Originally, the topmost floor might have been divided into smaller chambers for the duke's family and higher ranking members of the staff and the duchess' ladies-in-waiting. A man of the social status of the Duke of Albany would have had a permanent staff of some 50 people - most of those had to bed down in the great hall and kitchen.

The Duke of Albany died in 1420, and both dukedom and regency passed to his son Murdoch (born 1362). When King James I finally returned to Scotland after his ransom had been paid in 1424, he was not happy about the way some nobles had taken up control of the kingdom. He had Duke Murdoch of Albany and his sons arrested for treason and executed in 1425. Doune Castle fell to the Crown and served as hunting lodge and dower house for the Scottish monarchs during the next decades. 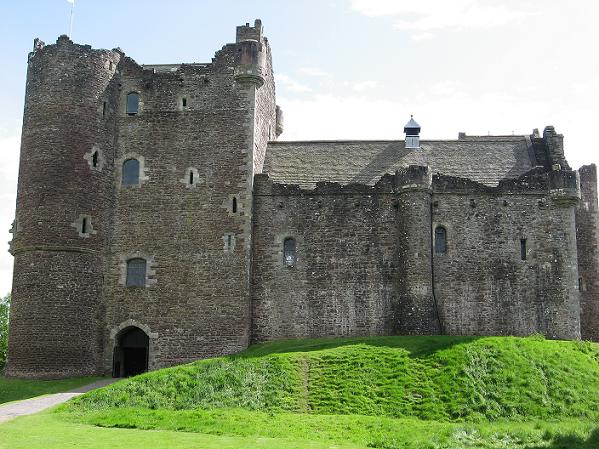 Another shot of the castle from the outside
Footnotes
1) Some Winterfell scenes of the pilot to A Game of Thrones have been filmed in Doune, but the pilot was never aired and filming of the series took place in Ireland, among other locations. I don't know if any of the Winterfell scenes taken in Doune remained in the season 1.
2) All measurements according to Wikipedia. The Historic Scotland guidebook gives no measurements.

Comments:
Hey there. It's Leech. This is so cool. I just started watching the Outlander series a few nights ago. I started the books recently as well. It seems that show does the castle some justice, but your photos, history and descriptions here are very nice, especially adding the dimensions so readers know how big some place really is.