23 Apr 2017
A Virtual Tour through Mediaeval Bruges
The weather turned into a mix of sunshine and clouds during the days I spent in Bruges, but despite the dramatic appearance of some of those clouds, it never rained. 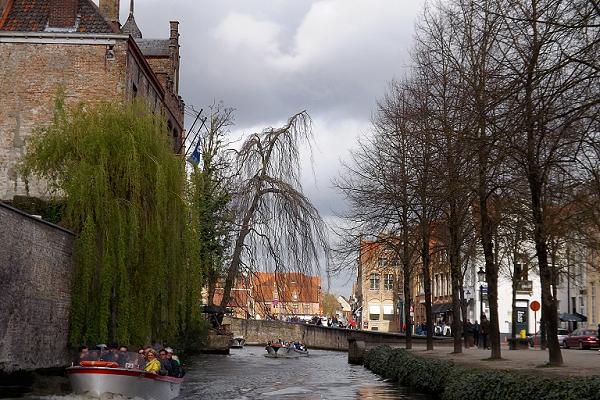 A tour on the canals is very popular

Bruges has even more canals than Ghent, so one of the first things I did was to take a tour on the water, which was almost as crowded as the streets. A bicycle taxi proved the fastest way to get to my hotel, winding its way through narrow lanes and tourist clusters. (Ghent has recently closed its old town for most cars which makes walking the narrow lanes easier.) And this is Bruges in April; in summer you'll better get a Nimbus 3000 to move around. *grin* 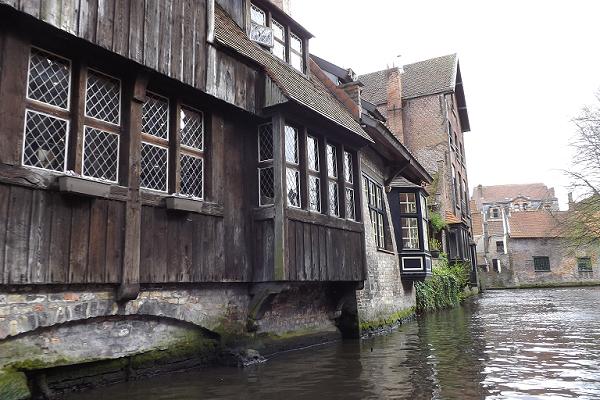 Old houses at the canals
There are a lot of old houses along the canals, and bits of green wherever it manages to grow. It is a lovely way to explore Bruges. I got a bunch of photos and will post more of them in a separate post some day.. 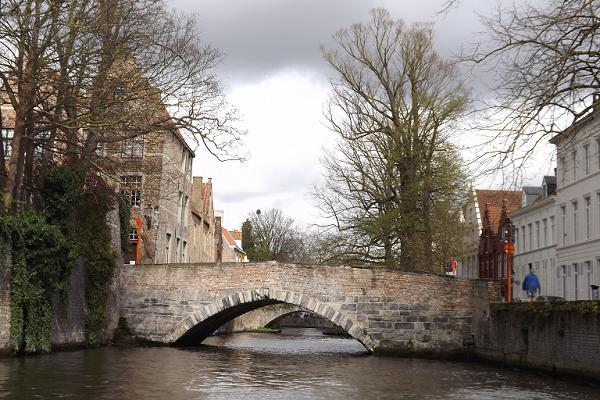 There are a lot of bridges
There are a lot of bridges as well. When you stand up to take a photo over the heads of the other people in the boat, you need to watch out for those and duck in time, because most of the bridges are very low. In the Middle Ages, cogs could reach the former Water Hall at the market place, but on the smaller canals, transport was done by barges. 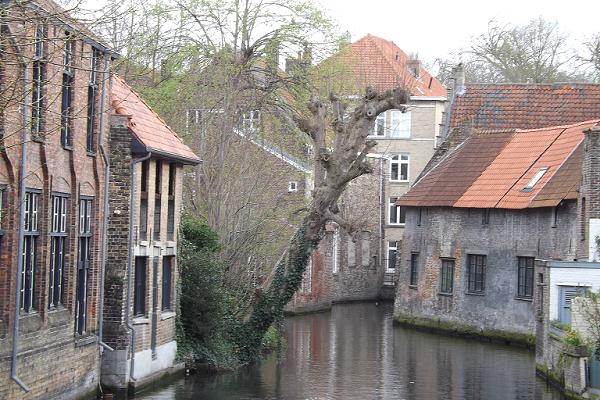 Bruges-la-morte
When the sun disappeared behind a layer of grey clouds, the vista reminded me a bit of the 19th century Bruges desribed in George Rodenbach's novel Bruges-la-morte (published 1892) with its grey houses, dark waters and mists. At that time, the town had lost its connection with the sea due to silting of the Zwin river, and the industry didn't take hold like fe. in Antwerp.

But today, tourists enliven the picture in most places even on a dreary day. Though there are spots where few tourists go (and miss out on some pretty and interesting places). 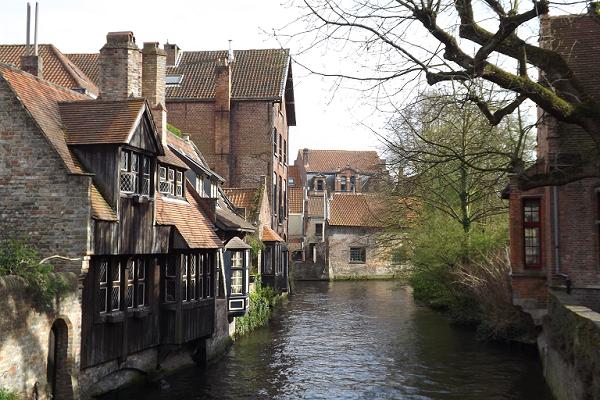 Sometimes the sun came out
And when the sun came out, the canals were a most lovely place. This charming spot can be found behind the choir of the Church of Our Dear Lady, Bruges' main church (more below). 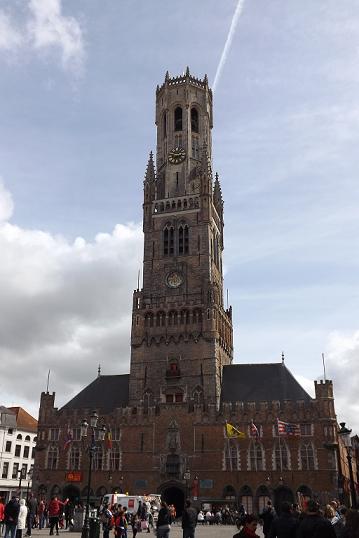 Cloth Hall with belfry
Bruges has its Cloth Merchants' Hall with a high belfry, too, dating to the 13th century. It is 83 metres (272 feet) high and can be ascended by 366 stairs. The view from top is probably spectacular, but I don't like heights and I didn't fell like ascending 366 stairs, either. Plus, those vistas never come out as grand on photos. In summer, people sometimes wait for an hour and more to get inside, because the number of people allowed in the tower is limited. 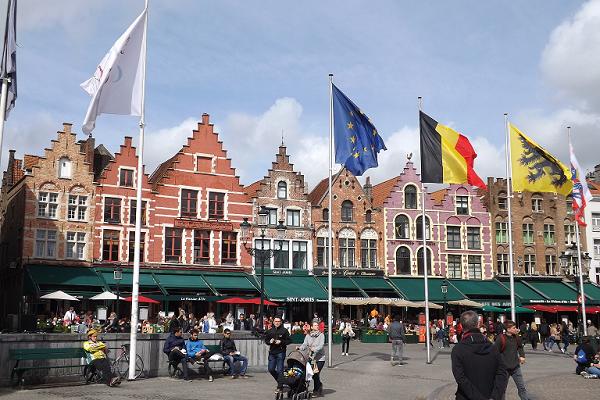 Pretty old houses at the Market
The belfry dominates the market square, but on the opposite side is a row of pretty old houses, another postcard motive.

Under those green sunshades hides a whole row of restaurants with yummy, albeit somewhat expensive, Belgian food. Yes, I did try the famous mussels and loved them. 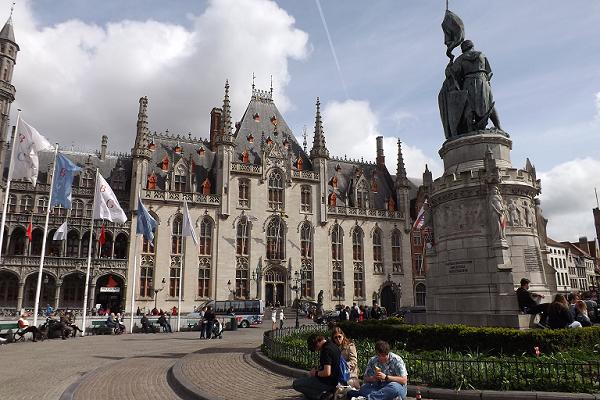 The well in the foreground shows the figures of Pieter de Coninck and Jan Breydel, two men who led a Flemish uprising and successfully fought against the French occupants at the batte of Kortrijk, also known as the Battle of the Golden Spurs, in 1302. 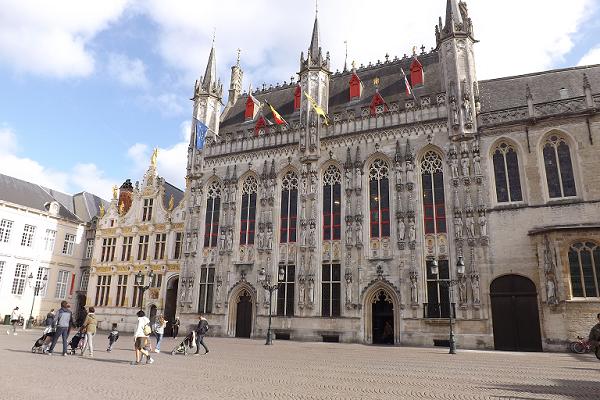 The old town hall
The oldest square in Bruges is called Steen, after the castle that once stood there. The town hall - now its outstanding feature - was completed in 1421. It is the oldest example of a municipal building in the Brabantine Gothic style in Belgium. The town halls of Ghent and Leuven followed its example. 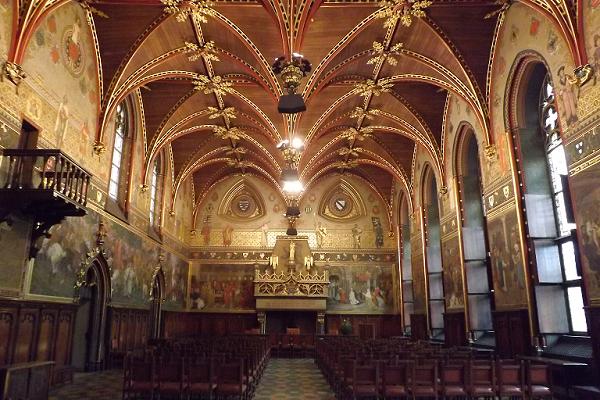 Town hall, interior: the great hall
The interior was restored about 1900 in the Gothic revival style. The two halls were joined into one and the ceiling renewed with some Gothic looking beam constructions. The murals show scenes from the history of Bruges. 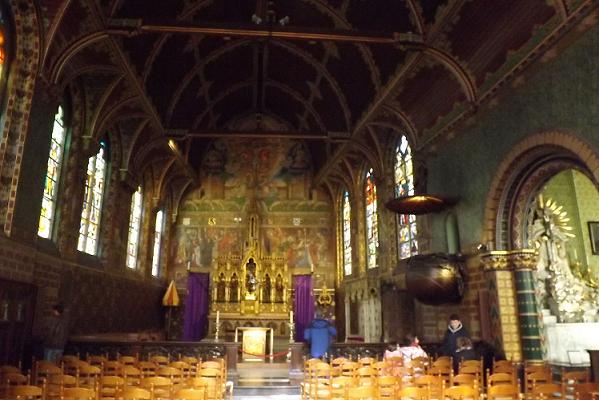 Holy Blood Chapel, interior
The Chapel of the Holy Blood started out as a two storeyed chapel adjacent to the old castle. In 1150, Thierri of Alsace, Count of Flanders, returned from the second crusade with a relic of the Holy Blood; until today one of the most venerated relics in Catholic Flanders. It is presented in a famous procession every year.

The upper chapel was transformed in Gothic style in the 15th century, and altered again in the 19th, this time in Gothic revival style. The chapel is now a - to my taste - overdecorated mix of styles. It is also full of tourists. 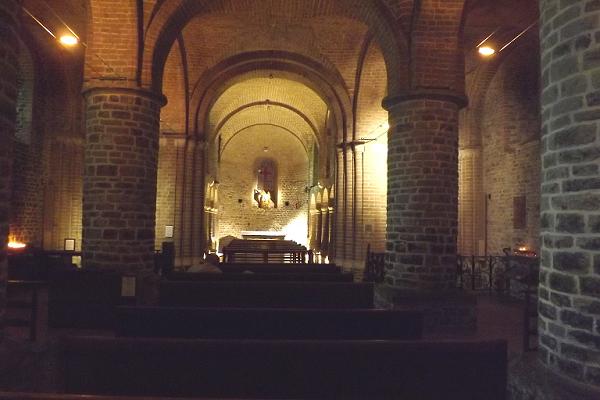 St.Basil's Chapel, interior
The lower chapel, known as St.Basil's Chapel, was never changed and therefore kept its Romanesque style. Regular readers of my blog know that this is my favourite style in architecture, so I really enjoyed this beautiful example. The place was much quieter, too. 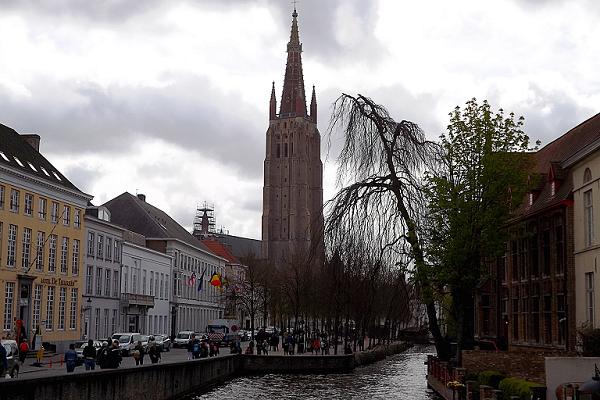 Unfortunately, the tower was pretty much the only part not scaffolded in right now. Most of the interior is not accessible due to renovation work, either. 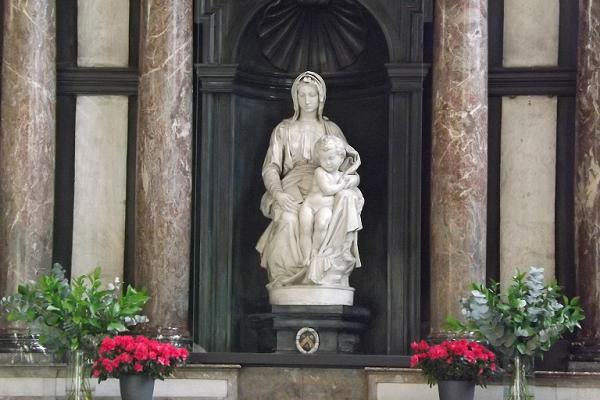 Michelangelo's Madonna with Child
What can be seen is the church's most famous treasure (and they charge the full fee for it even during renovation); the Madonna with Child sculpted by Michelangelo in 1504. Merchants from Bruges bought it during the artist's lifetime and gifted it to the town.

I almost missed it. The madonna is a small part of a huge Baroque altar setting with pillars of black marble which I walked right past because I'm not a fan of that style. I had to ask a guide where the statue was hiding. 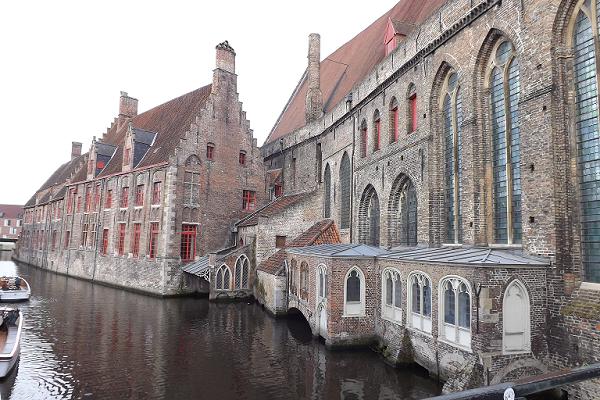 Old St.Johns Hospital
St. John's hospital dates back to the 11th century and was expanded during the Middle Ages, eventually incorporating a monastery and a convent. Further wards were added in the 19th century. It was a place where the sick too poor to pay for private treatment by a physician, including pilgrims and travellers, were cared for. It was in use as hospital until 1977. Today, the buildings house a congress centre and museums. 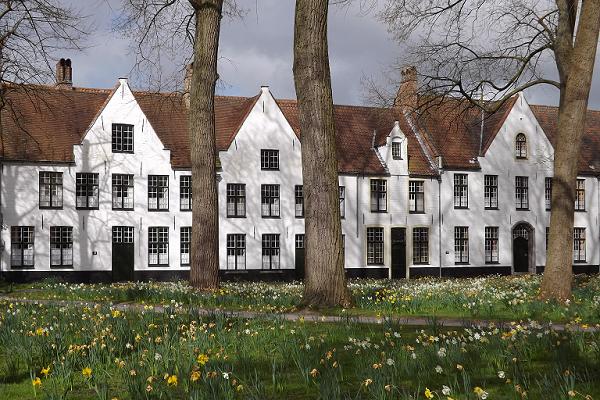 Béguinage Ten Wijngaerde, the inner court
Of all the béguinages in Flanders, the one in Bruges is the most beautiful, especially in spring when the narcisses on the central lawn are in bloom. It was founded in 1245 by Margaret of Constantinople, Countess of Flanders and Hainaut. Fun fact aside: she had a few too many sons from two marriages, which led to a nasty little succession war.

Most of the pretty white houses date to the 16th - 18th century. Beguines lived there until 1927, since then it is a convent of Benedictines, and a place of quiet despite the tourists (most of them respect the signs that ask for silence). 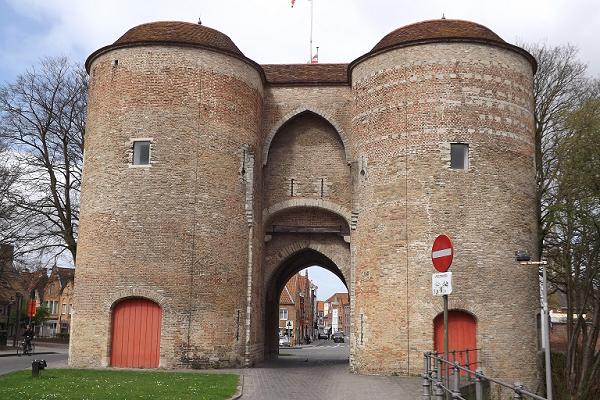 The Ghent Gate
The Gentpoort is one of the remaining gates of the Mediaeval town fortifications. The town walls date to 1297 (little of them remains), but several of the gates are from the early 15th century, including the Ghent Gate. It includes a little museum which unfortunately was closed for lunch; and I didn't have the time to return. 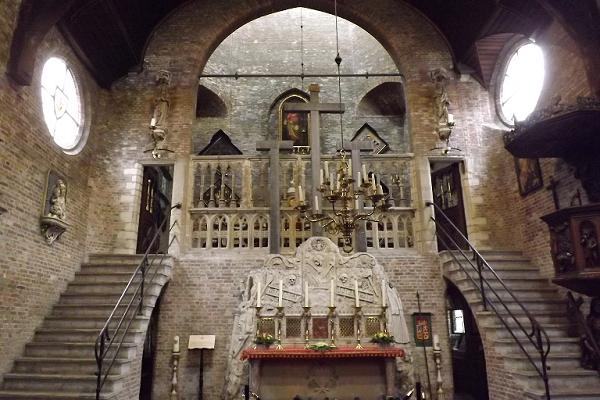 Jerusalem Chapel, interior
One of the places missed out by the busloads of tourists is the Jerusalem Chapel and the town manor of the Adorne family, who some may know from the Niccolò series by Dorothy Dunnett. A member of the Adorne family - which had moved from Genua to Bruges in the 13th century - commissioned the chapel in 1470. An existing chapel was altered to resemble the Church of the Holy Sepulchre in Jerusalem. 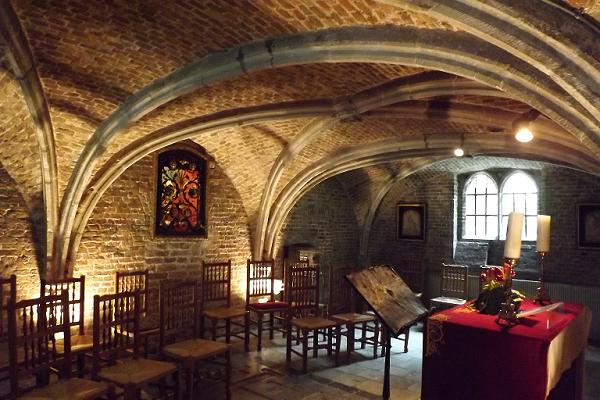 Jerusalem Chapel, the crypt
The main room with the stone altar and stone-carved calvary is flanked by two staircases leading to a second floor with another altar. Hidden behind the stairs is the entrance to the crypt which in turn leads to a narrow corridor and a small room with an imitation of the holy sepulchre.

There were no other tourists around and I found the chapel to be a nice and peaceful place. Some rooms of the former manor house include a small museum about the Adorne family. 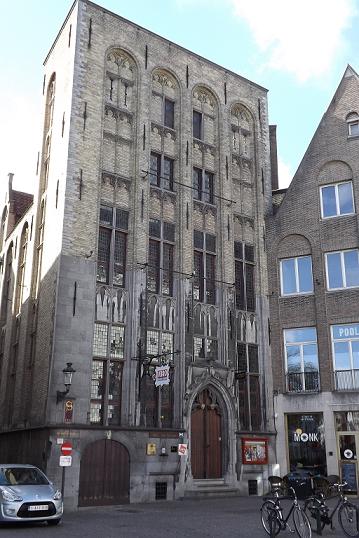 House Ter Beurze
The place in front of the inn run by the family van der Beurze was used as stock exchange market since the 14th century, when purely financial transactions were introduced from Italy. The family also worked as brokers and agents for visiting merchants. The house and square gave the name to the German word for stock exchange market - Börse. The house with its Gothic façade dates to 1493, though the inn existed since 1276. 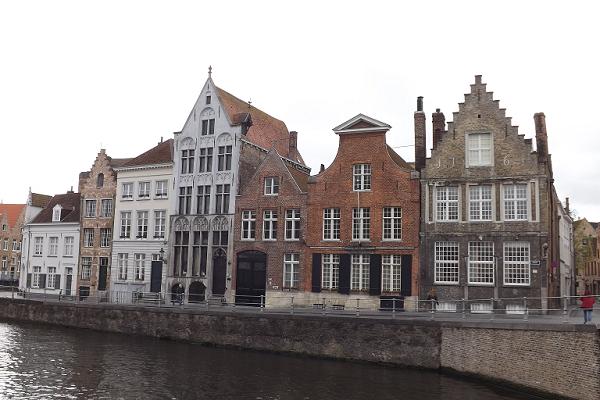 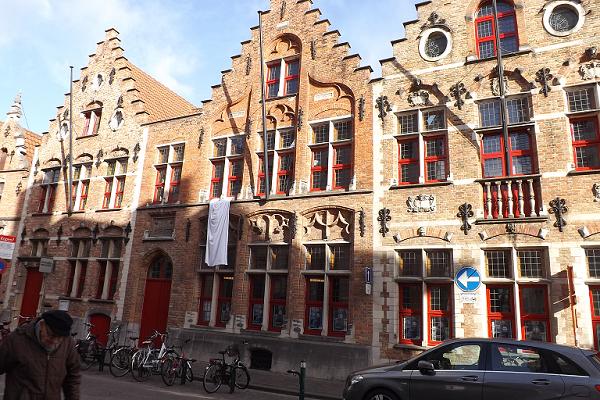 Crow step gabled brick houses
A number of houses are made of brick and reminded me of Lübeck, like the ones in the photo above.

Bruges is a town that is best explored by walking around a lot, also outside the main tourist paths (and a boat tour on the canals, of course). 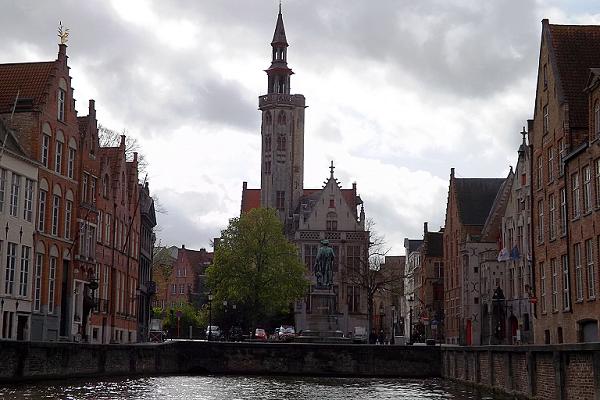 Van Eyck Square
The Jan van Eyck Square lies on the site of the former toll stop for ships visiting Bruges. At that time the canal, crossed by a bridge, ran all the way to the market. Part of it has been covered in the 18th century, thus creating the square. Today, the pretty vista is included in the boat tours.   ¶ April 23, 2017

Comments:
Thank you for that charming tour of Bruges, my favorite town in all the world. I've been there many times and once for a short number of years , even owned a part of a very impressive 16th. century building there. You have captured the special feeling of this special place. All the best to your continued adventures and writings.