17 Apr 2017
Dominated by the Cathedral - Antwerp's Old Town
Antwerp is a bigger city than Ghent or the charming Bruges, with one of the largest ports in Europe and a famous shopping mile, but the historical centre is no larger than in the other towns. 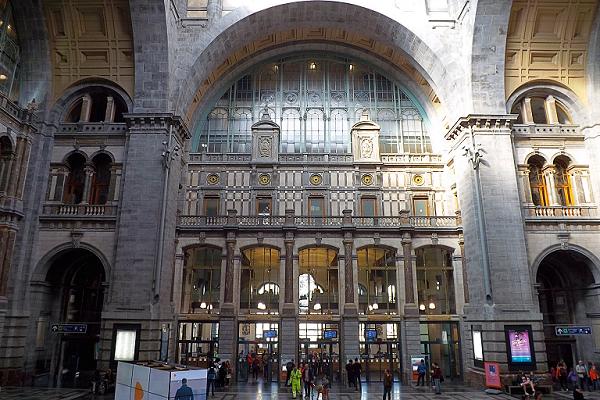 Interior of the central railway station in Antwerp

I visited the city on a day trip from Ghent - the train connections are very good - so the first thing I saw of Antwerp was the railway station, an imposing hall in the Art Nouveau style built between 1895-1905 and renovated in the 1980ies, after the consequences of bomb damage during WW2 and constant vibrations from the fast speed trains had made the building instable. 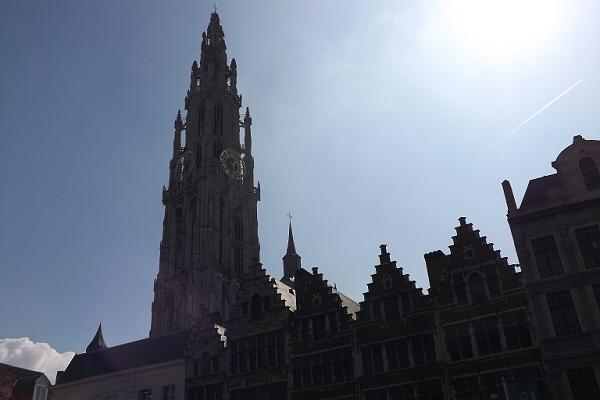 The spire of the cathedral against the morning sun
It followed a walk along the 'fashion mile' to the old town. Antwerp is famous for its fashion, but since I can get the labels I want in my home town, I didn't stop in any of the stores. I like nice clothes, but I'm not a fashionista. If you want to do some shopping, you need to plan more time for your visit to Antwerp, though. 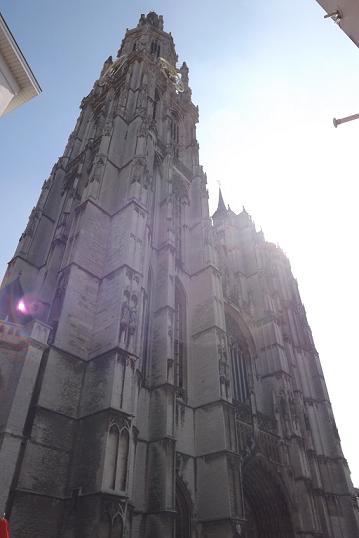 The towers of the cathedral westwork
One cannot miss the way, because the 123 metres (404 foot) high tower of the cathedral is well visible, especially in the morning sun. Originally, there should have been two towers crowning the westwork, but at some point the money went out. The story of so many public buildings. ;-) 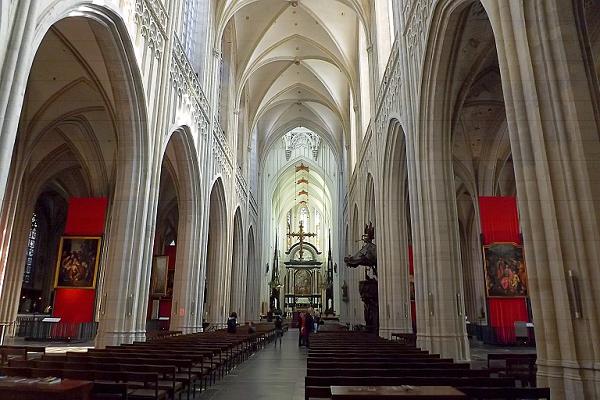 Cathedral of Our Lady, interior
Like so many other Gothic churches, the Cathedral of Our Lady has been erected in place of an older church. Construction started in 1352, but it took about two hundred years to finish, so most of it is in the Brabantian Gothic style, known as flamboyant style in England. It is an imposing seven-naved building of 120 metres (390 ft.) length and 75 metres (264 ft.) width. 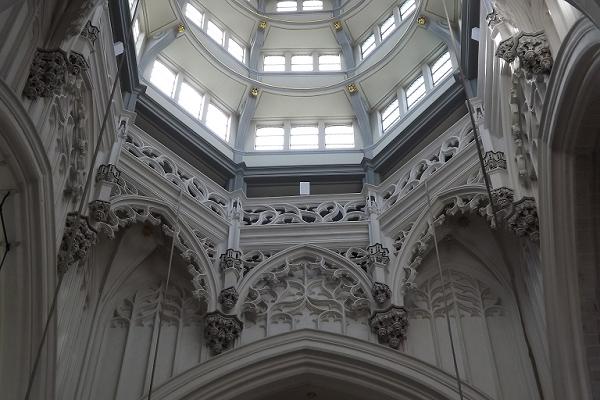 Details of the crossing cupola
The interior of the cathedral was severely damanged by a fire in 1533, and during the Calvinist iconoclasitc fury, much was destroyed as well, but today several paintings of Rubens as well as other works from his compatriots are displayed in the church. Most of the other interior is Neo-Gothic, like fe. the choir stalls. 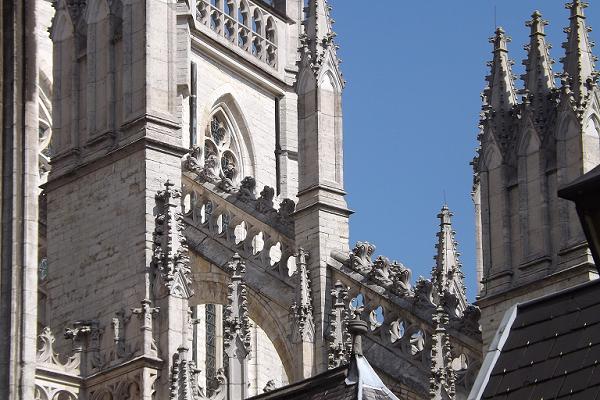 Flying buttresses
The cathedral is closely surrounded by houses, so it was difficult to get good exterior shots. But I found a nook between roofs where I got get a closeup of some flying buttresses. I'll save a few more photos for another post about the cathedral. 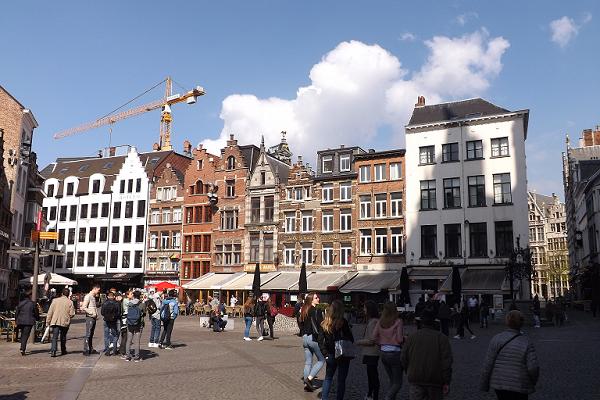 Handschoenmarkt
In front of the cathedral is the Glove Makers' Market, one of several places in Antwerp. It is rather cozy with some pretty old houses with crow-steeped gables. 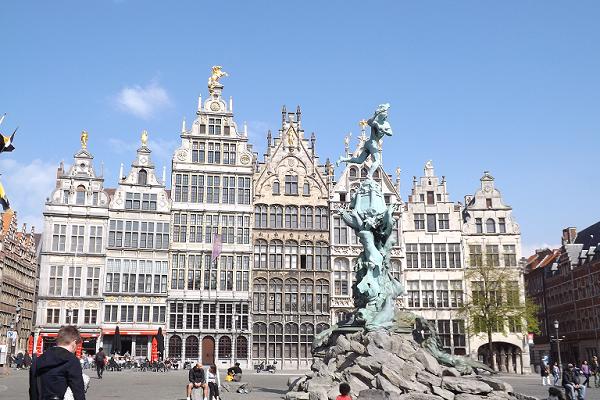 Fine old houses at the Grote Markt
More old houses can be found on the Grote Markt, the Great Market. Those are even more splendidly decorated. Most of them are 19th century reconstructions of old Renaissance and Baroque houses, but they kept the style matching the town hall. 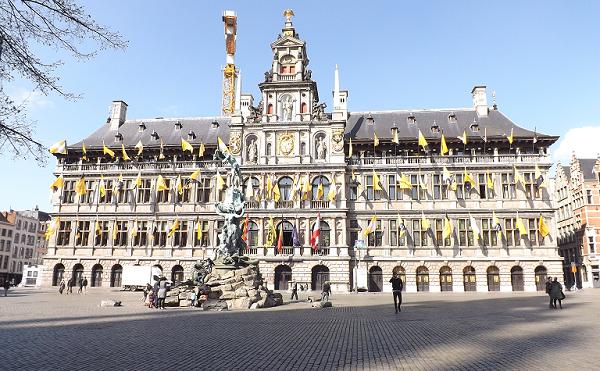 The well in front of it shows the foundation legend of Antwerp - the name is said to have gone back to (H)ant werpen (Hand Throwing). Some evil giant took a toll from every ship passing on the nearby Scheldt river and cut the hand off everyone who didn't pay, until a Roman soldier named Silvio Brabo put an end to it by cutting the giant's hand off in turn. Silvio threw the hand into the river, and on that island Antwerp was built. 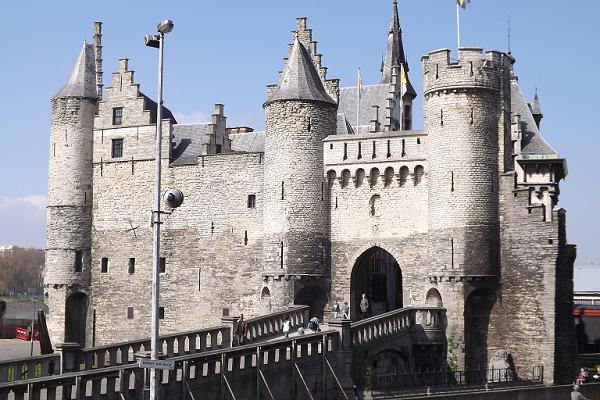 Castle Steen
Linguistically, the name goes back to aanwerp, a headland. The oldest remaining part of the town is the castle Het Steen on a headland in the Scheldt river. The castle dates back to the 12th century, though it has been changed in 1520 when Charles V had it altered to accomodate artillery. The keep was also replaced by a palace building. The Steen was used as prison from the 15th - 19th century; until 2011 it had been a museum. 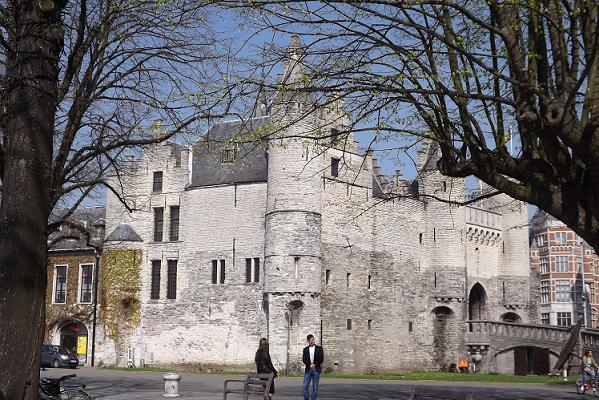 The Steen, seen from the other side
The Steen looks like the little brother of the Gravensteen, but once it was part of a series of fortifications that protected access to Antwerp and controlled the traffic on the Scheldt river. 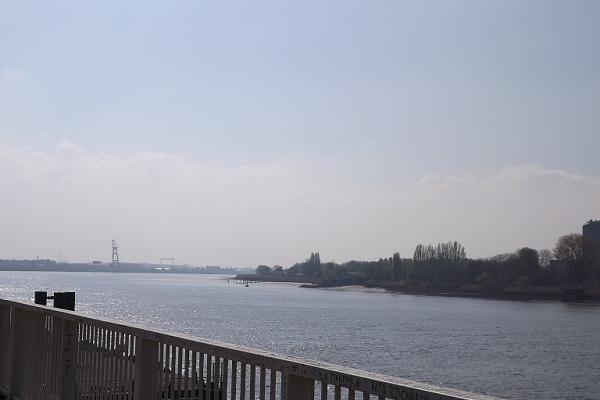 The river Scheldt
The river Scheldt which enters the North Sea 60 miles further north-west has always been the heart of Antwerp, with a harbour in the Middle Ages, and a large port nowadays. In the 19th century, more than two million people left Europe for America by ship from Antwerp.

I left the town in direction of the railway station and traveled back to Ghent.  ¶ April 17, 2017